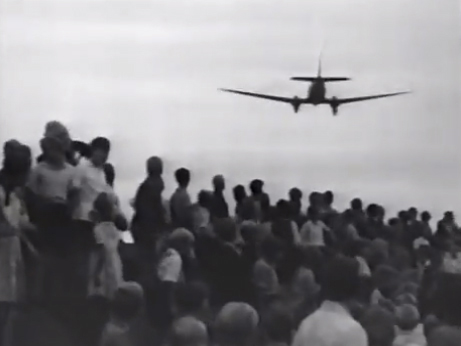 Part 4 of the fascinating and extensive Cold War documentary series by the Cold War International History Project, Berlin 1948 – 1949, deals with the response of the Western Allies to the Soviet Blockade of Berlin – the Berlin Airlift (Die Luftbrücke).

Surrounded as it was by East Germany, West Berlin was dependent on a corridor through the East with a single Autobahn and one railway line for its supplies.  Following a breakdown in the democratic process between the four conquering powers in June 1948, the Soviets exploited this weakness, blocking the road and rail routes in an attempt to force Britain, America and France out of Berlin.

Much to Stalin’s surprise, the Western Allies sustained the population of West Berlin by flying in the necessary supplies of food and coal.

At the height of the operation planes landed every 45 seconds at Tempelhof Airport and in the 11 months of the airlift more than 2.3 million tonnes of goods and fuel were flown in by almost 278,000 flights.

In May 1949, recognising the success of the Berlin Airlift, the Soviet blockade was lifted but of course the Cold War would escalate and continue for many years.