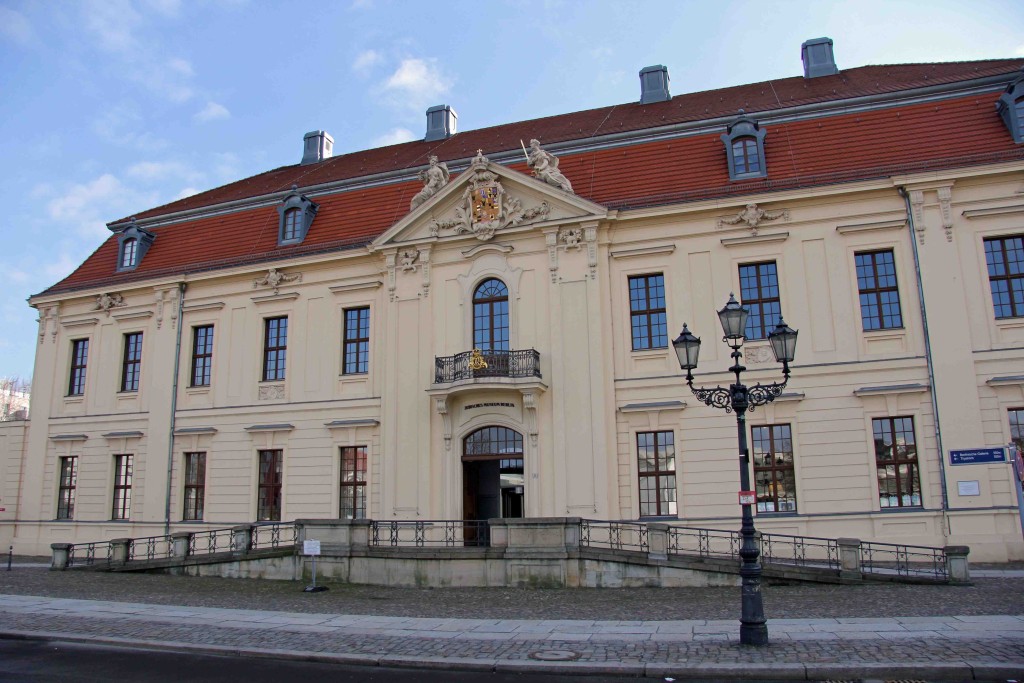 Like Hamburger Bahnhof – Museum für Gegenwart (Museum of Contemporary Art), I visited the Jewish Museum Berlin (Jüdisches Museum Berlin) with my first Museum Pass in 2010 and was determined to go back during my Berlin Museum Marathon in February this year. 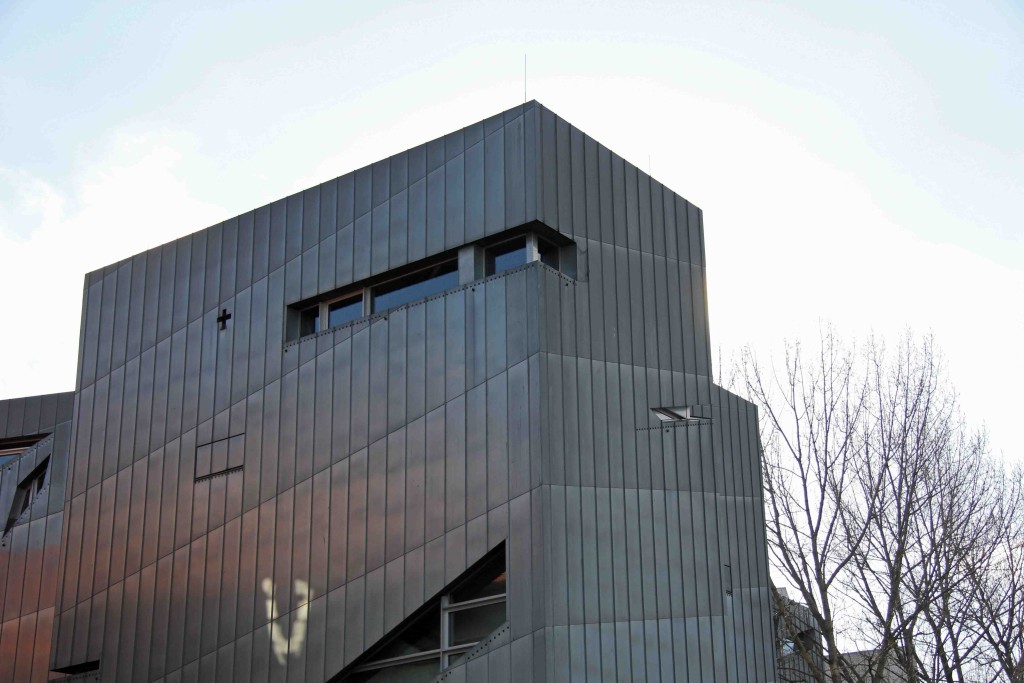 The Museum is housed in a combination of the Collegienhaus (Old Building), the former Superior Court of Justice for the Kurmark Brandenburg, and the striking and more instantly recognisable zinc façade of the Libeskind Building.

The new building, opened in 2001, is accessible only through a staircase from the Old Building, which it zig-zags away from and the walls are cut through by the irregular shapes of the windows and a series of voids. 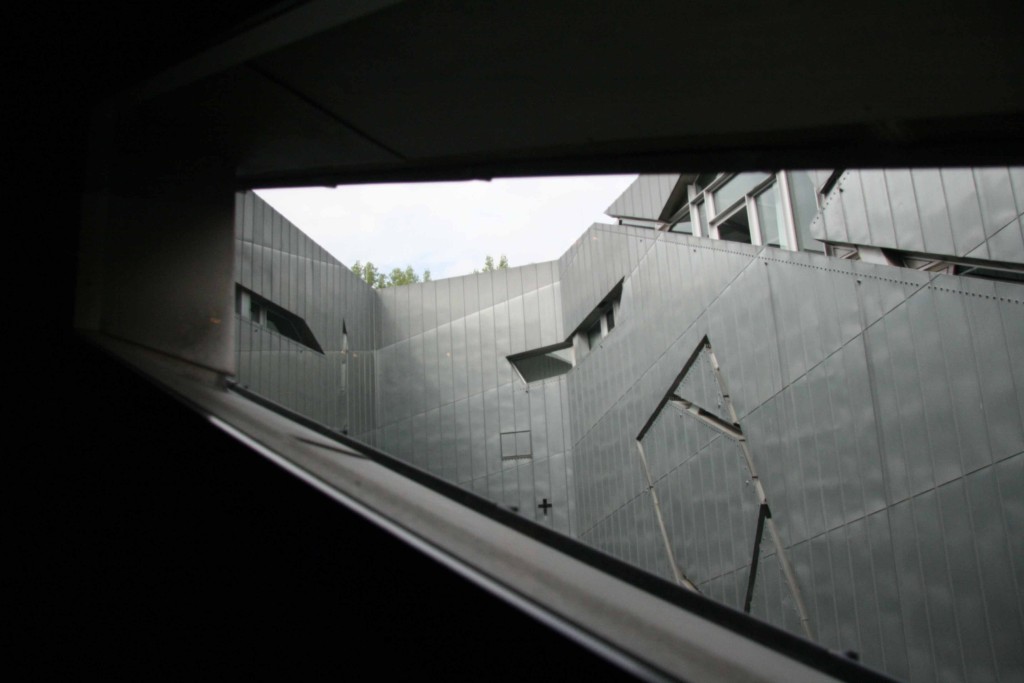 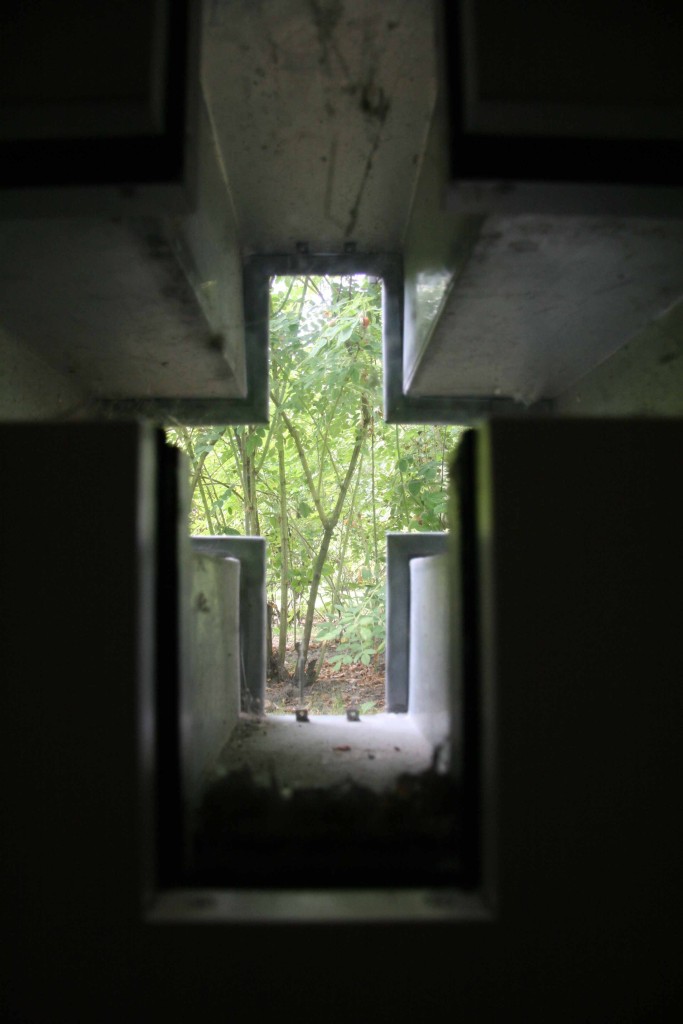 In  2000 Daniel Libeskind said that the museum voids refer to:

…that which can never be exhibited when it comes to Jewish Berlin history: Humanity reduced to ashes.

The installation Shalekhet (Fallen Leaves) by Israeli artist Menashe Kadishnman consists of more than 10,000 iron faces, representing the innocent victims of war and violence, that cover the floor of the Memory Void. 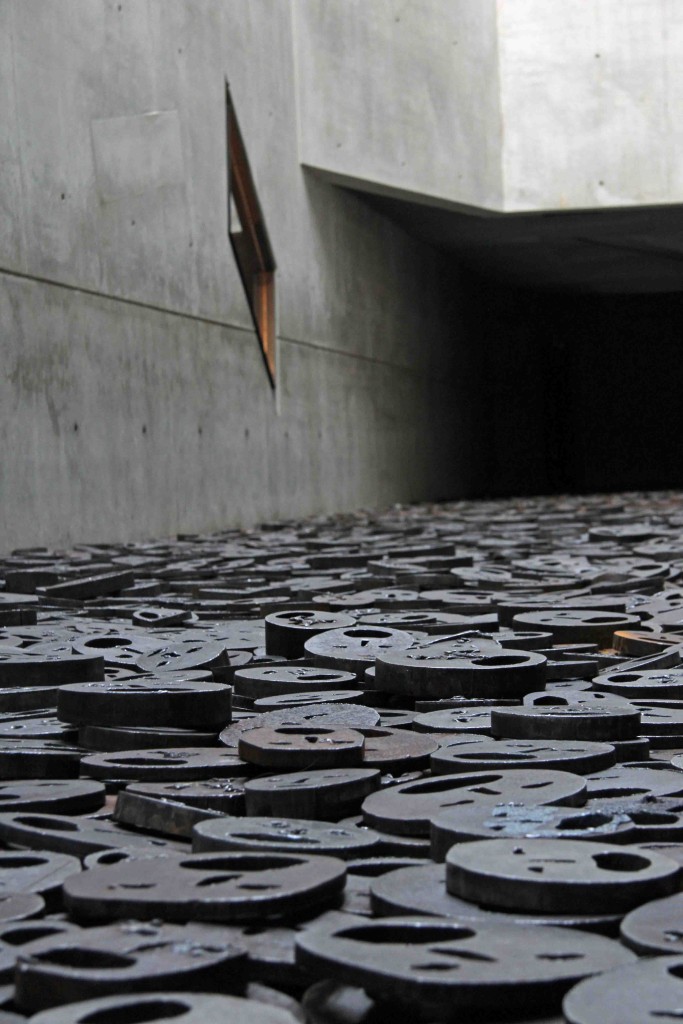 The Axis of the Holocaust leads to a heavy door that opens into another of the building’s voids, The Holocaust Tower.  As with all of the voids the walls are bare concrete and the tower is neither air conditioned nor heated.  Natural light enters through a space at the top of the tower.  The combination of these environmental factors creates a peaceful, if slightly disconcerting, atmosphere. 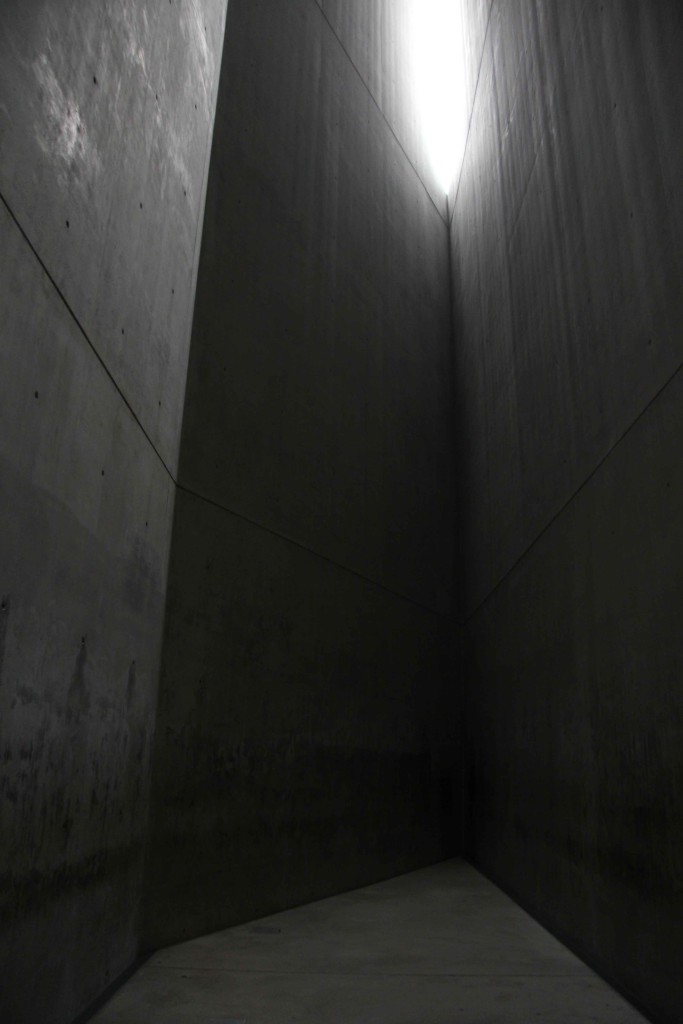 At the end of the Axis of Emigration, is the Garden of Exile, a series of 49 concrete stelae, taller than those of the Memorial To The Murdered Jews of Europe, but similarly arranged in a regular pattern on sloping ground.  Here, the stelae are filled with earth and trees grow from them.  The same disorienting effect results. 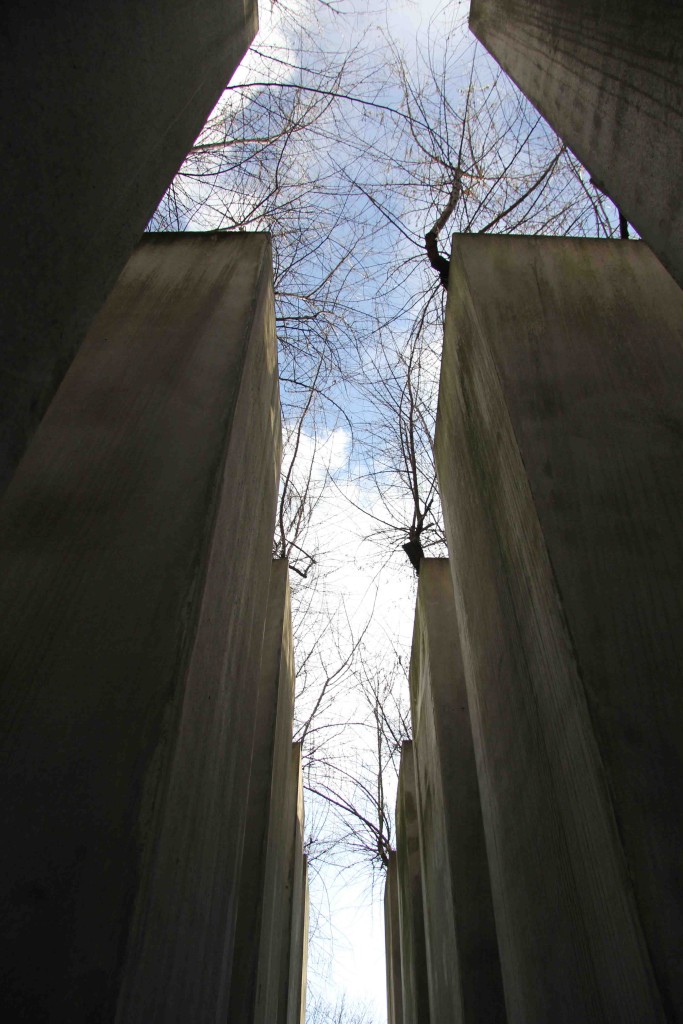 The Axis of Continuity leads to a staircase and the exhibition space above, where the permanent exhibits present two millennia of German Jewish History. 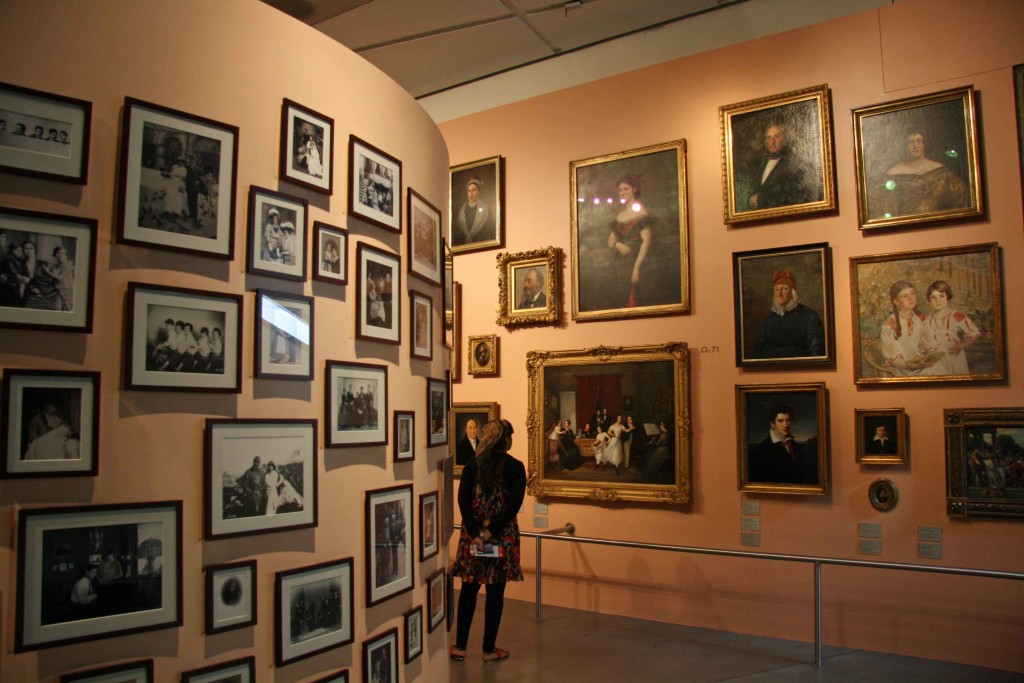 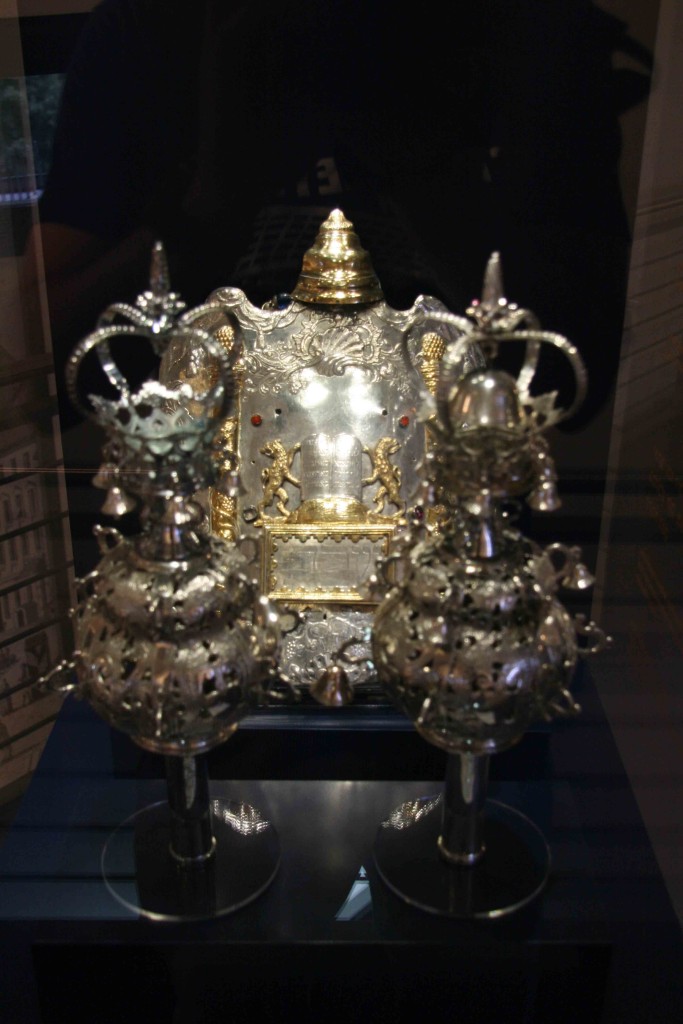 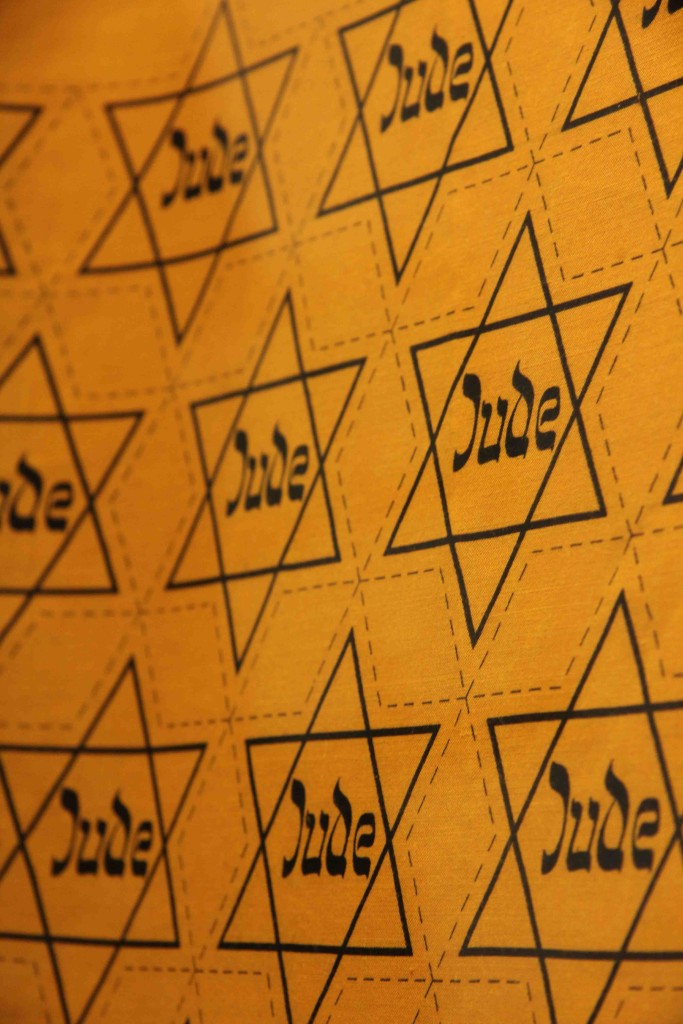 Inevitably some of the most notable and heartbreaking exhibits are holocaust related.  The museum has the following explanation of the yellow star:

Beginning in September 1941, all Jews were required to wear a yellow star: “Jews six years of age and older are prohibited from appearing in public without a Jewish star…It is to be worn visibly on the left side of the breast, firmly sewn to the clothing.”

The stars were manufactured by the Berlin flag maker Geitel & Co.  Great lengths of cloth were stored on the premises of the Gestapo-controlled “National Union of Jews in Germany”.  For a processing fee of 10 pfennig, the Jews had to purchase the yellow star and sew it to their clothing.

For more information about the Jewish Museum Berlin (Jüdisches Museum Berlin), including opening hours and prices see their website.