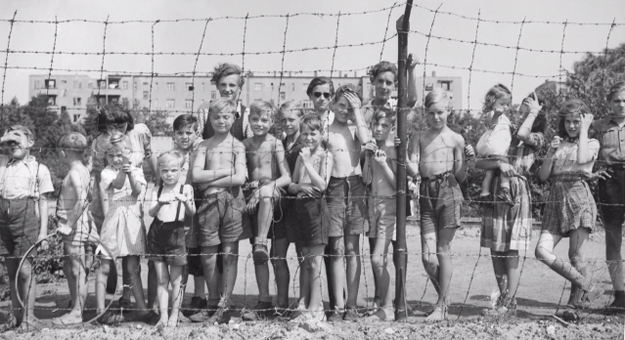 Photo: Still from The Candy Bomber by KUED

The tale of Gail ‘Hal’ Halvorsen and his role as ‘The Candy Bomber’ (or Rosinenbomber for Germans) dropping chocolate and sweets for the children of Berlin during the Berlin Airlift must be one of the most moving and uplifting stories of the Cold War.

In 1948 as tensions in Berlin mounted and the Cold War began the Soviets blocked road and rail routes to West Berlin cutting off all supply lines.  Determined to hold on to a strategically and symbolically important part of the country the Western Allies launched Operation Vittles and kept the people of West Berlin alive by flying in thousands of tonnes of supplies during the 15 months of the blockade.

Gail Halvorsen was a pilot in the US Air Force flying C-54s loaded with food, milk, coal and other essentials. In his free time Halvorsen liked to explore West Berlin with his video camera and on one of his breaks he met a group of children at the fence at Tempelhof Airport.  He was touched by the warmth of their greetings and their gratitude for the job he was doing. Impressed by their restraint, as they didn’t beg him for anything he decided to reward them with sweets and chocolates.

He explained that when he flew in the next day he would drop chocolate and chewing gum from his plane for them. Concerned that they would not know which aircraft to watch out for Halvorsen explained that he would wiggle his wings as he flew over a beacon at the airport, earning him the nickname Uncle Wiggly Wings (Onkel Wackelflügel).

As the popularity of his missions grew, word reached Halvorsen’s commanding officer, who summoned him. Fearing a reprimand, he was surprised to be praised for his act of kindness and candy drops were eventually officially approved by the commander of the Berlin Airlift, Lieutenant General William H Tunner.  The sweet drops became known as Operation Little Vittles, a play on the full operation’s title.

Produced by KUED and aired on PBS, The Candy Bomber tells the touching story of Gail ‘Hal’ Halvorsen and the joy he brought to the children of West Berlin during the Berlin Airlift.  I have only been able to find a 5-minute excerpt from the full documentary so if anyone knows where to watch the whole program I would love to know.