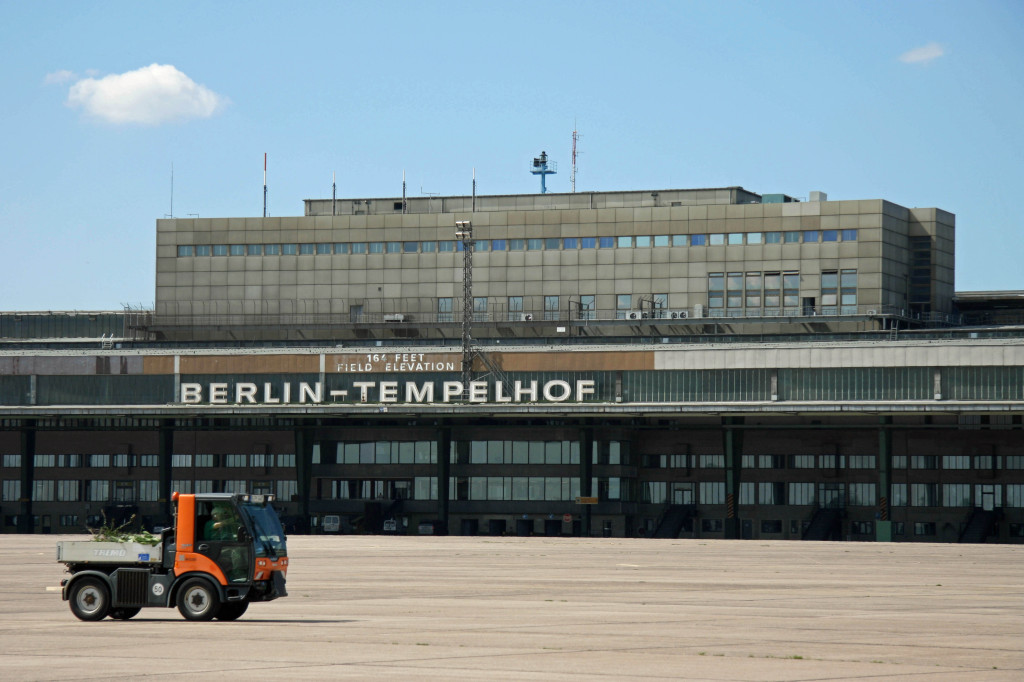 A tour of the disused Tempelhof Airport in Berlin offers a fascinating insight into the city’s history, an example of public space being put to good use, if only temporarily, and leaves unanswered questions about the area’s future.

During Berlin Fashion Week I was lucky enough to get the chance to go to the Bread & Butter Summer 2012 event at Tempelhof Airport.  Not only that, I got to write a post about the experience for one of my favourite Berlin blogs, überlin.

As if that wasn’t enough, during the Bread & Butter show it was possible to take a free Historic Tempelhof Airport Tour. An experience I was determined not to miss.

You only have to look at the scale and splendour of the facades of the airport to recognise the hand of Albert Speer.  Hitler’s architect for his Welthauptstadt Germania designed many colossal buildings according to his Führer’s wishes and a testing stone for some of his plans is described in my Hitler’s Folly – Schwerbelastungskörper post.

It was Speer who insisted on changes to the original designs of Ernst Sagebiel to make the building more monumental but Tempelhof Airport, like so many of Hitler’s plans, was a victim of his lust for war and Speer’s vision was never fully realised.

For instance, the intention was that the full 1.2km span of the airport roof would be terraced (a section can be seen in the photo below) so that the airport itself became part of a spectacular stadium for the air shows that would take place on the airfield below. 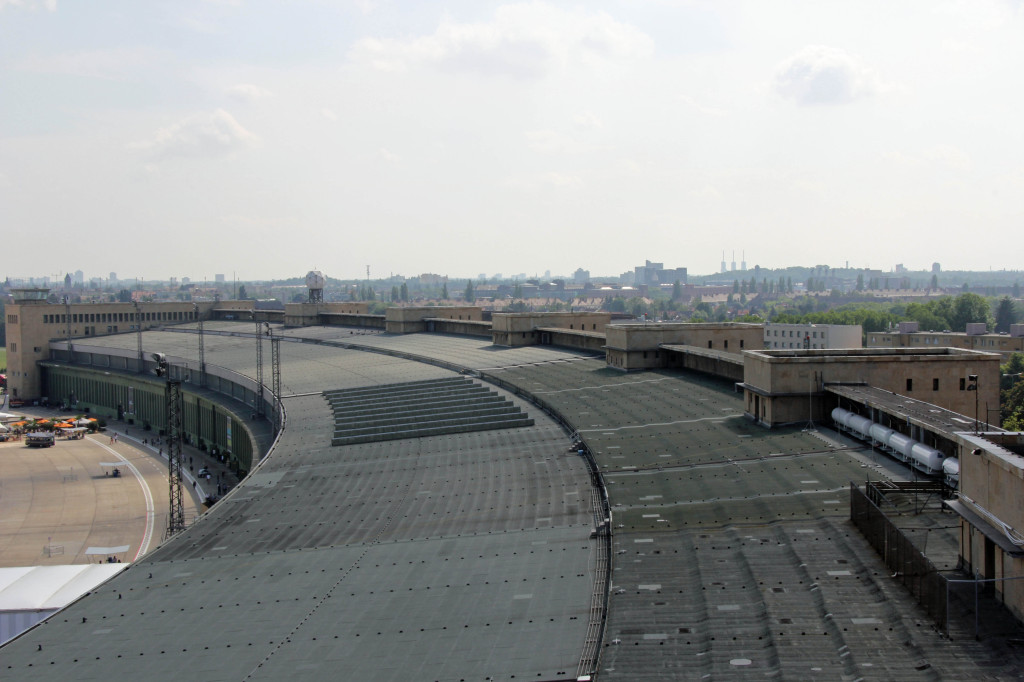 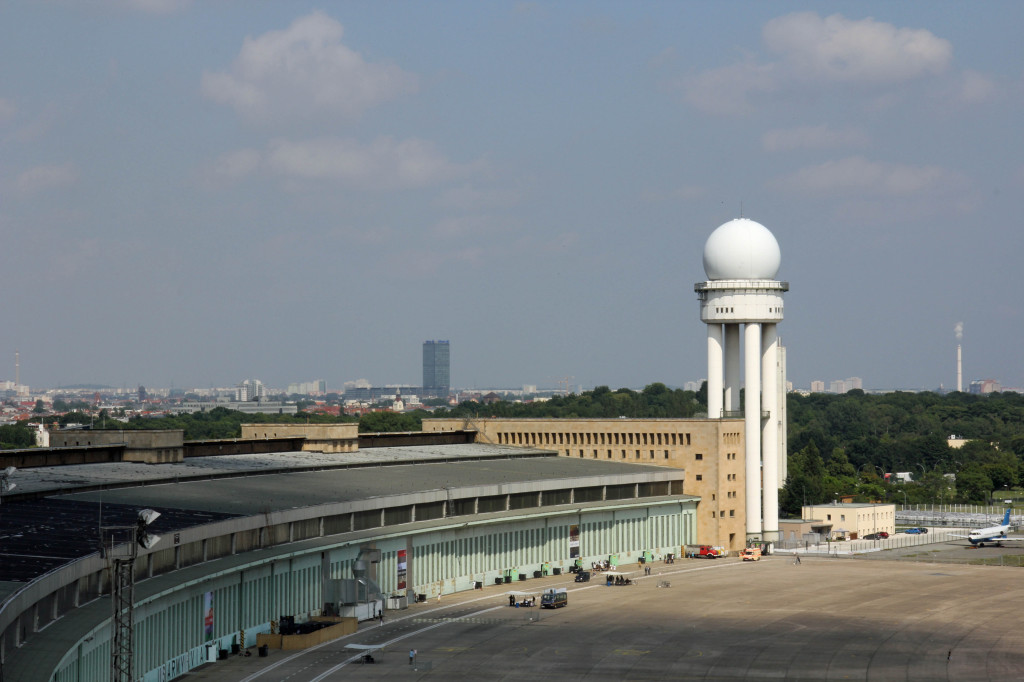 The far reaches of the airfield away from the terminal buildings were also to be banked and the whole stadium would have had capacity for 1,000,000 spectators. 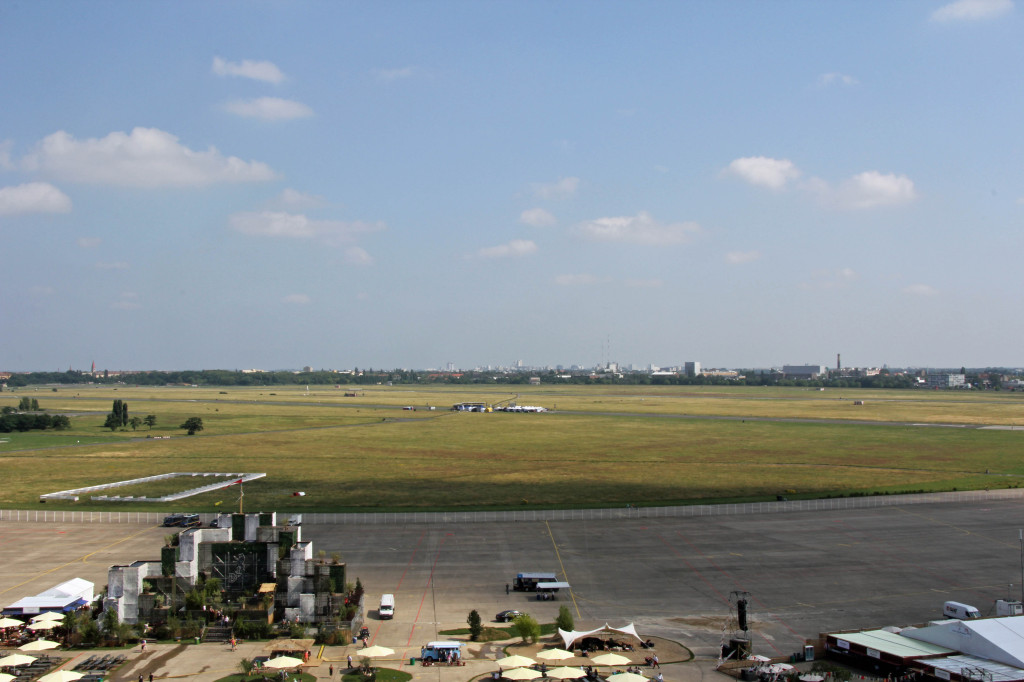 During the war, parts of the basement in the airport were used as air shelters for those working in the building and some of the local residents.  During the tour you can see the artwork on the walls, common to shelters in Germany at this time. 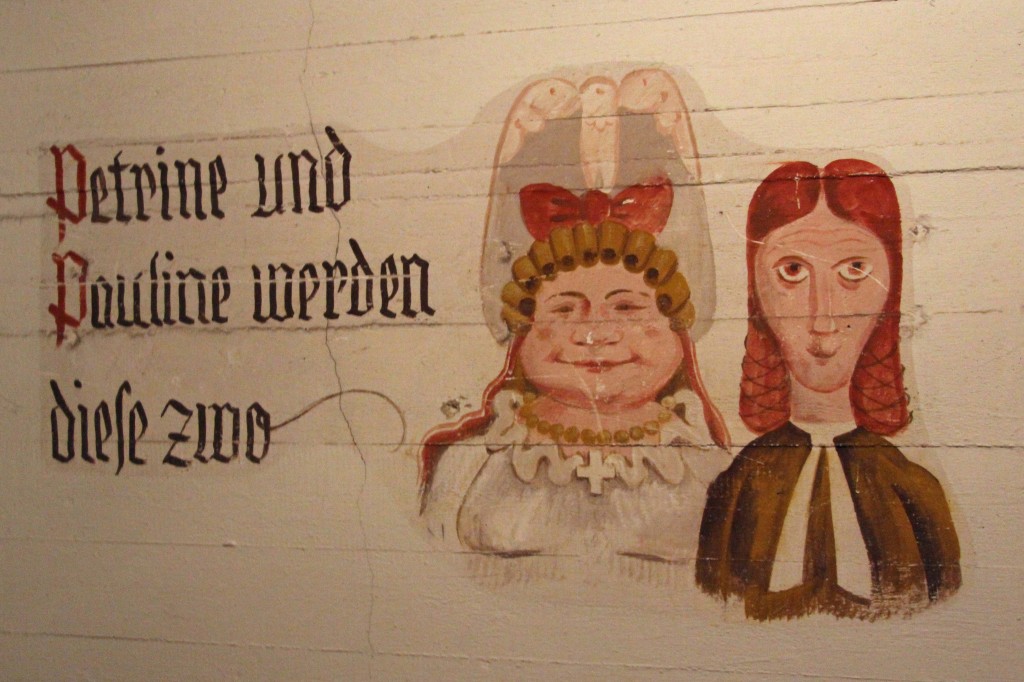 Another example of the changed vision is that when the Americans took control of the airport in 1945 they elected to create runways running East-West across the airfield contrary to the original North-South plans.

The original plans had water running from the cascades at the Kreuzberg Monument all the way to the terminal buildings and the runways continuing past them along the same line.

Evidence of the American’s use of the airport as an Air Force base can be seen in the basketball court at the top of the building.

Tempelhof’s most valuable contribution to the people of West Germany was the part it played in the Berlin Airlift.

In 1948 the Soviets blockaded the rail and road supply routes to West Berlin and cut off gas and electricity supplies in an attempt to create a stranglehold and force the Allied Forces out of the city.   For 11 months, essential supplies were flown into Berlin by the Allies to sustain the people.  By the time the blockade was lifted more than 2.3 million tonnes of goods and fuel had been flown in by almost 278,000 flights.

Even its present day incarnation, the main hall of the airport housing the check in desks is breathtakingly huge. 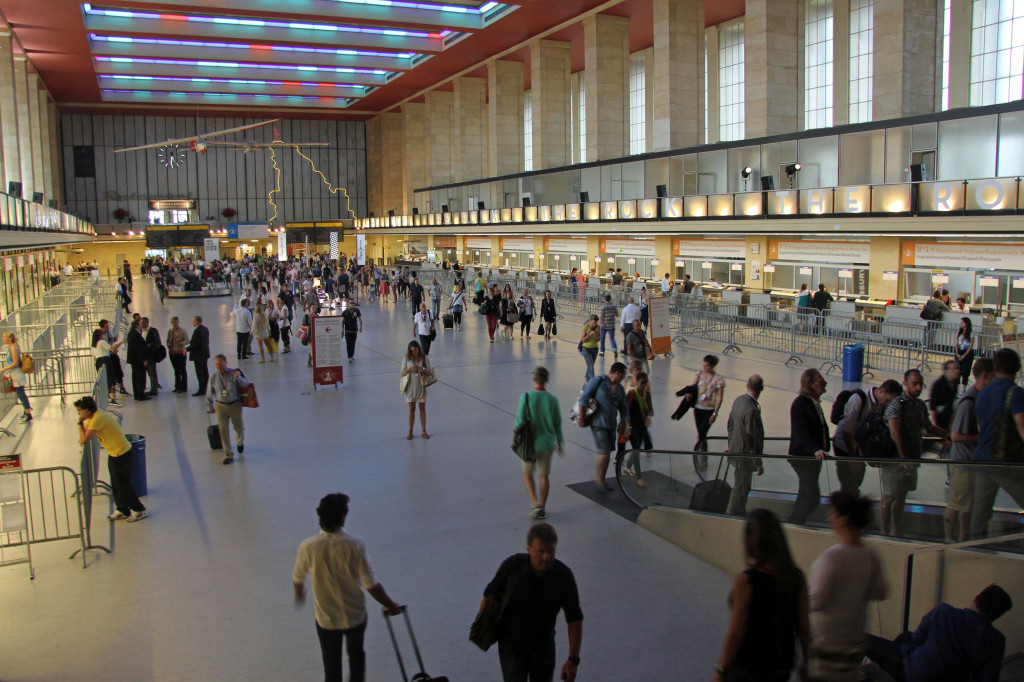 But when you find out that the ceiling height was lowered and see the vast space above that was originally part of it, you begin to appreciate just how incredible this building once was.

There is also evidence in the signage and fixtures of the airport of updates to the interior design in later decades. 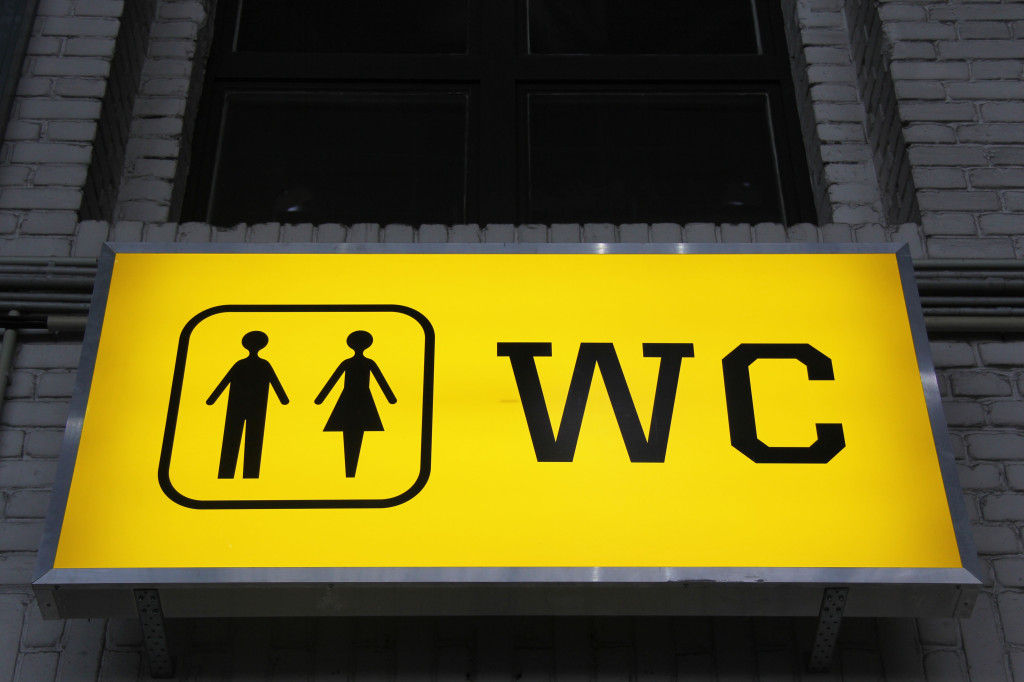 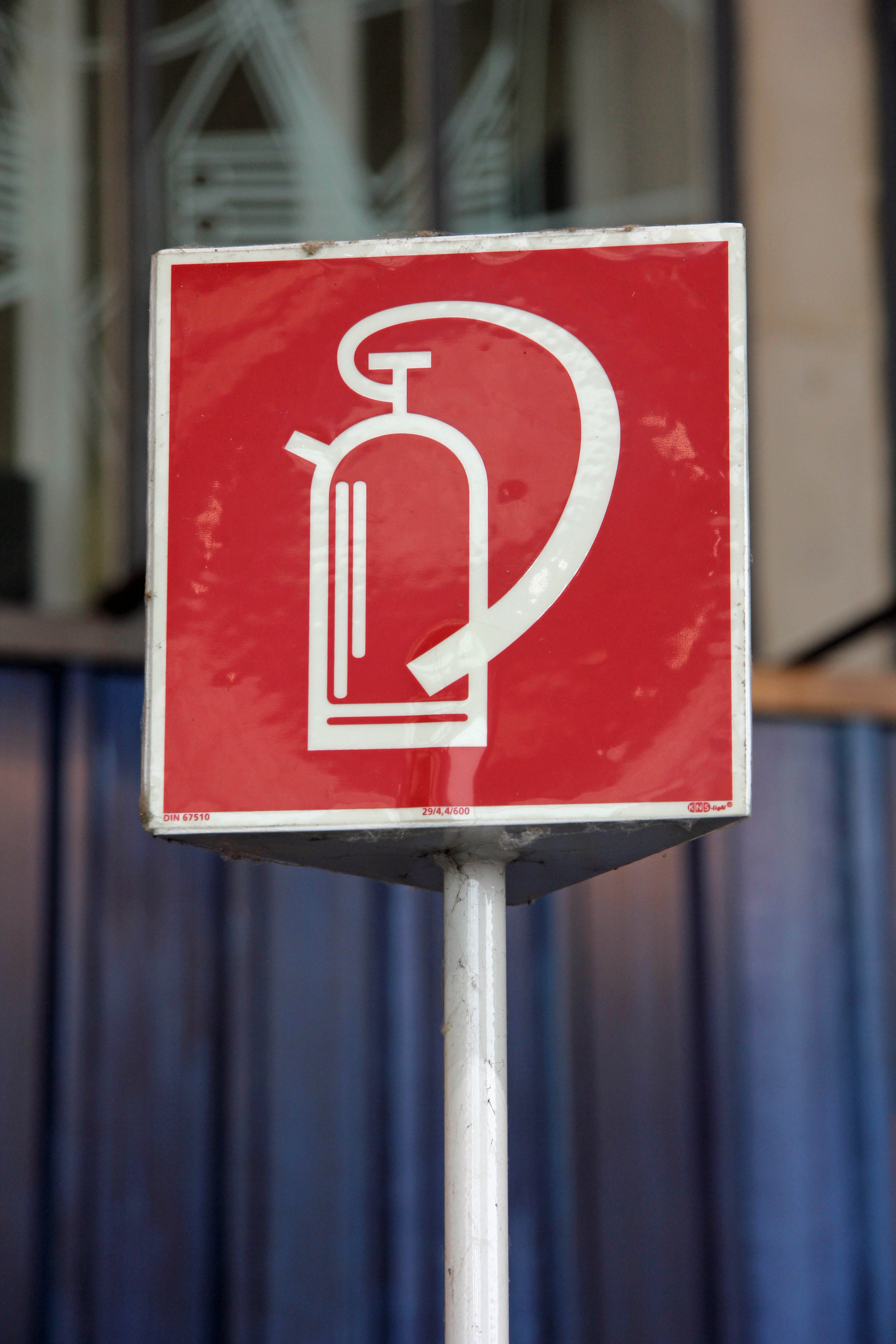 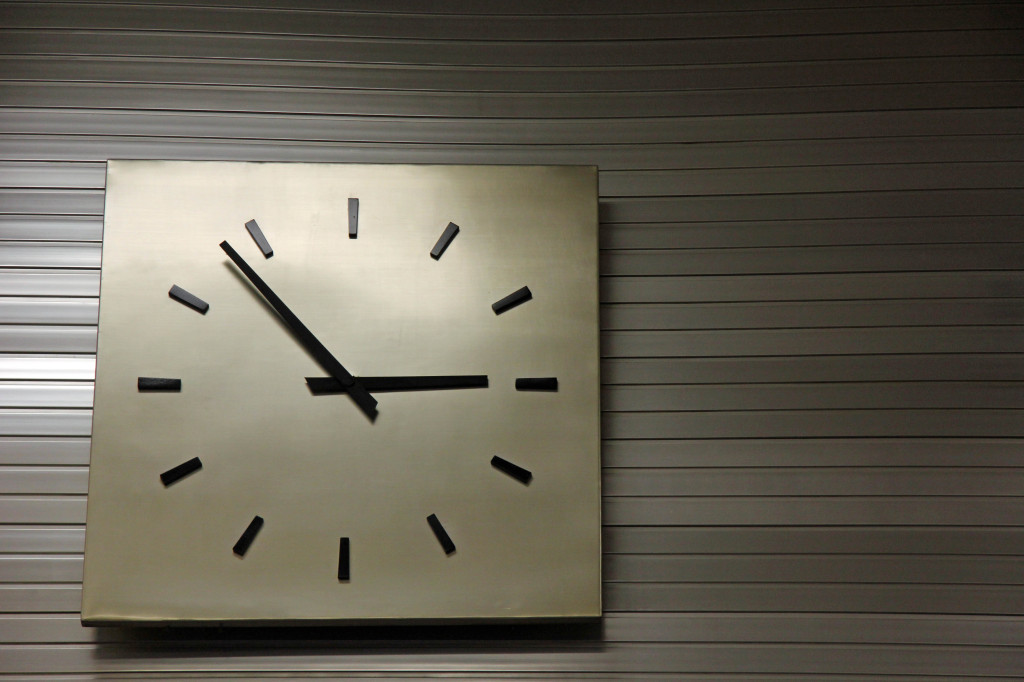 For now, public use of the terminal buildings is restricted to events like Bread & Butter or music events like the Berlin Festival but the airfield, the Tempelhofer Freiheit, has been open to the public as a park since May 2010.

It is a popular recreational area with the runways used for cycling, rollerblading and kite-surfing and families and groups of friends grilling on the grass.  There is also a section that has been taken over for urban gardening and Berliners are always finding new ways to enjoy themselves here – on 4 August 2012 the Tempelhofer Freiheit will host the Slowlympics, an event organised by Slow Travel Berlin.

The current plans for the airfield include some pockets of new housing with much of the space remaining as a public park but our guide was unsure how these plans might be altered following the recent cancellation of the International Horticultural Exposition of 2017 on the site.

There are also plans to open part of the airport building to the public, housing a café and restaurant/bar and giving access to sections of the roof, affording wonderful views over the airfield and beyond.

I would recommend a tour of Tempelhof Airport to anyone with an interest in Nazi-era architecture or Berlin history but if this isn’t your idea of fun you should at least visit the park – a unique public space in the heart of the city.