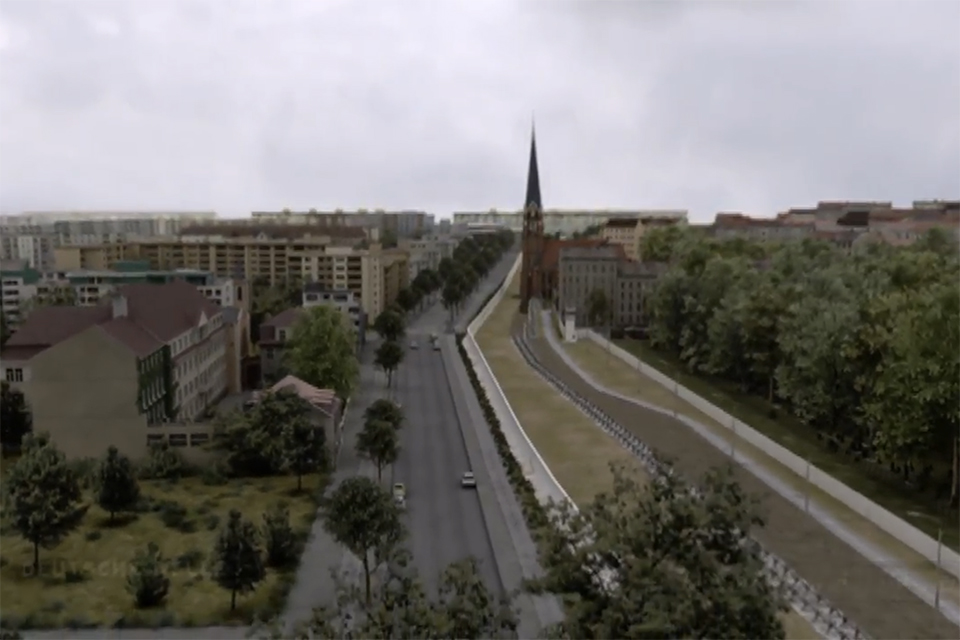 Screenshot from Walled in! – The inner German border by Deutsche Welle on YouTube

The computer animation Walled in! – The inner German border, which details the fortifications of the former boundary was produced by Deutsche Welle in cooperation with the Berlin Wall Foundation to mark the 20th anniversary of the fall of the wall.

Save for a few remaining stretches preserved as memorials, the Berlin Wall is merely a memory for those who experienced it and an abstract idea for those who didn’t. Two of those memorials have been used as the starting point for the computerised reconstruction of the defences of the 1980s in this highly informative video.

We want to convey to the people who see it what we suffered in Berlin and on the German-German border between the GDR and the Federal Republic.

The animation starts near the corner of Ackerstraße and Bernauer Straße – now the site of the Berlin Wall Memorial (Gedenkstätte Berliner Mauer) – along the 155km border between East Berlin and West Berlin.

The watchtower shown here is the one that still stands as part of the memorial and can be overlooked from the viewing platform next to the Documentation Centre. The Chapel of Reconciliation stands now where the Church of Reconciliation was destroyed in 1985.

The term Berlin Wall means that people tend to think of the border as a single wall. There were in fact two walls separated by an expanse of open ground called the death strip. Over the course of its 28 years, the defences here were constantly refined and strengthened to prevent escapes. Beyond the inner wall was a signal fence with a silent alarm connected to watchtowers where guards scanned the area for signs of suspicious activity. Tank traps and a carpet of steel spikes made an escape by car impossible and by foot treacherous; beyond them the ground was smooth so signs of escape would be easily detectable. The whole area was brightly lit a night.

A much longer border – 1,378km – separated East Germany from West Germany and the area around the Hötensleben Border Memorial (Grenzdenkmal Hötensleben) is used for illustration purposes.

The defences here were much the same as in Berlin but the addition of guard dogs and land mines and automatic firing devices attached to trip wires, in use up until 1983, made escape even more hazardous.

Only the most trusted citizens lived near the border here and the fear of resettlement to other lesser favourable areas of Germany made them even less likely to act in any way that would attract unwarranted attention.

The border security measures here have been well preserved (except for the life-threatening elements of course) and standing at the base of the watchtower on the crest of the hill is the best indicator of what the wall was really like that I have experienced so far. The Hötensleben Border Memorial can be easily combined with a visit to Checkpoint Alpha at nearby Marienborn.

Walled in! – The inner German border does an excellent job of bringing the Berlin Wall to life and explains concisely and clearly what the world’s most notorious dividing line was really like.