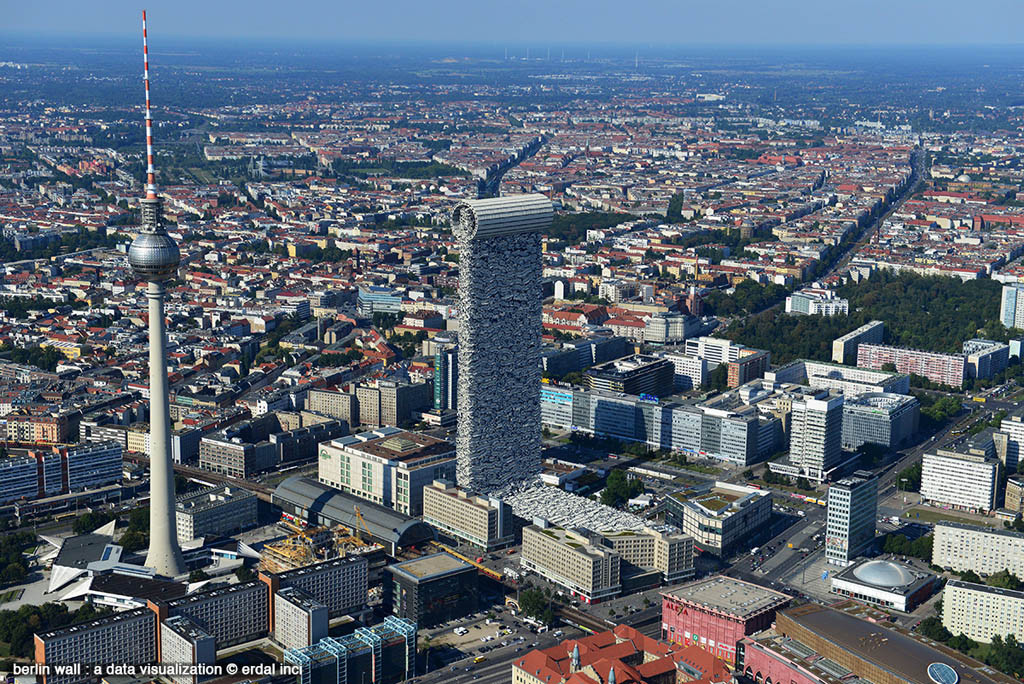 Turkish new media artist Erdal Inci has gone to incredible lengths to get across the true scale of the Berlin Wall with his project Berlin Wall: A Data Visualization.

When we think about the Berlin Wall, despite having an idea of its length, we can’t easily envisage its real size.  With this question in my mind, I decided to create a computer generated 3D model of the wall compiled together in a single frame.

Inci started his research on Wikipedia, where he found information about the fourth generation wall:

…it was constructed from 45,000 separate sections of reinforced concrete, each 3.6 metres high and 1.2 metres wide.

Using these dimensions he created a 3D model of a single L-shaped segment, which he then duplicated 45,000 times.  These pieces were then placed together to form one colossal wall segment.

The simulated 240 metre high segment of the Berlin Wall was superimposed into a photo of Alexanderplatz near the Fernsehturm for scale (see above).

Inci also produced a digital simulation of the collapse of his version of the Berlin Wall.

He is now looking for sponsors to help him take his project to the next stage: “a 3D printed version of this fractal design in 1:1 scale (3.6 meters).  So the viewer can easily recognise its form from a distance and upon closer inspection the wall can be viewed in its entirety.”

The collapse of the Berlin Wall was among the most dramatic and iconic images of the 20th century and with Berlin Wall: A Data Visualization, Erdal Inci has taken the drama up a notch.

// via The Creators Project //