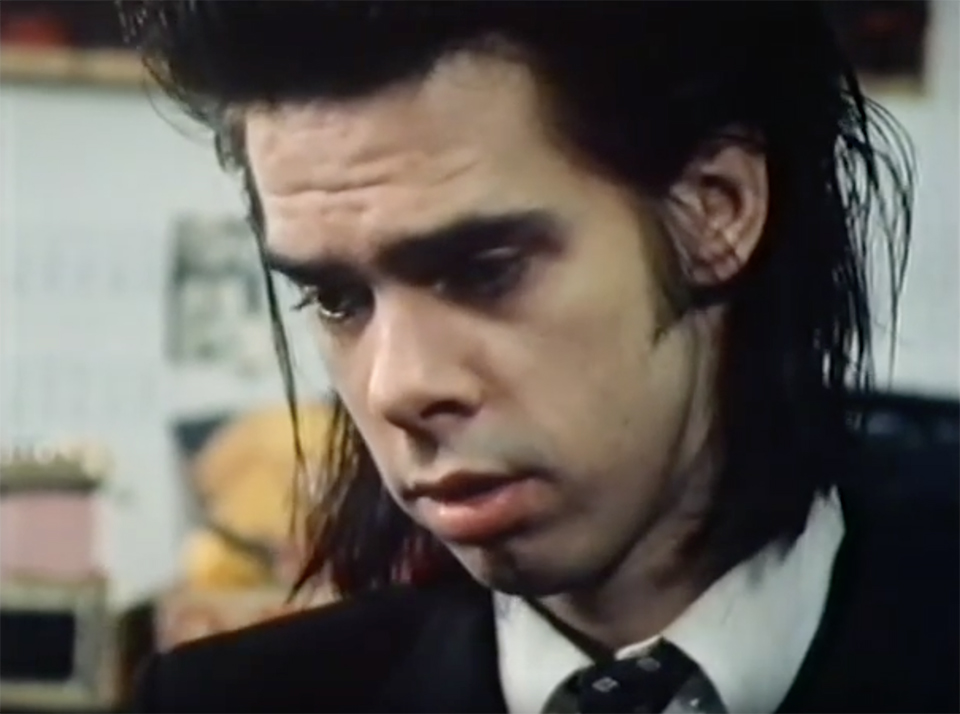 Nick Cave – Screenshot from Stranger in a Strange Land on YouTube

Produced by Bram van Splunteren for the Dutch TV channel VPRO, the documentary, Stranger in a Strange Land was filmed in 1987 while Nick Cave was living in West Berlin.

The voice-over is in Dutch but the interviews with Cave, which form the backbone of the film, are conducted in English. As are those with his friends and fellow musicians, Mick Harvey, Blixa Bargeld and Mark E Smith.

Nick Cave’s first appearance will be familiar to those who have watched Mark Reeder’s magnificent film B-Movie: Lust and Sound in West Berlin. The camera follows Cave into his room. Pulling back a curtain, and looking very young for his 30 years, he proudly announces, “this is my bedroom…and my collection of German Gothic paintings…my gun…uh and my desk…” This off-putting, almost disinterested delivery characterises his appearances in the film.

Nick Cave first moved to Berlin during his time with The Birthday Party. He became a regular at the legendary bar Risiko and formed a strong musical partnership with Blixa Bargeld of Einstürzende Neubauten, who was a fixture at the Kreuzberg nightspot. Describing his admiration for Bargeld’s talent he says “He can make his guitar sound like…nothing you’ve heard before. He’s brilliant. He’s my hero..”

His closeness to Bargeld and the latter’s influence on his writing style is credited by some as a factor in the break-up of The Birthday Party and subsequent formation of The Bad Seeds.

Like his idol, David Bowie before him, Nick Cave recorded several albums at the Hansa Ton Studios during his time in Berlin.

By the time Stranger in a Strange Land was recorded, however, Cave was already becoming disillusioned with the city. “It’s a bit sad”, he says. “I think it’s got its arse in the garbage can, Berlin.”

Stranger in a Strange Land ends with an extraordinarily surreal sequence as Nick Cave is driven around Hamburg in the back of a car.

Bringing up a previous interview during Cave’s time in London, the interviewer says, “you once said about yourself that you may have a persecution complex instead of being paranoid.”

It is hard to believe he wasn’t just messing with his interviewer but somehow I’m not sure.

Stranger in a Strange Land

Escape From East Berlin – Swimming across the Spree
GDR Architecture Models – MODERN EAST. Build Your Own Modernist DDR by Zupagrafika