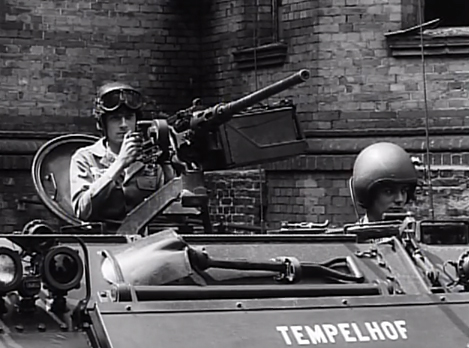 Photo: Still from the US Army documentary ‘The Big Picture – Berlin Duty’

The Big Picture – Berlin Duty was produced by the Army Pictorial Centre and presented by the United States Army.  What is essentially a propaganda film for the US Army is valuable as a documentary as it includes footage of day-to-day activities in West Berlin as well as key events in the history of the city.

The footage at 6:41 shows the utter devastation wrought on the city of Berlin by the bombers of the Allied Forces during World War II.  Looking at the rebuilt city it is difficult to imagine just how much needed to be cleared and reconstructed in the years following the war.

Amongst the historical moments captured are the Berlin Airlift in 1948-49; the riots in East Berlin in 1953 that came to be known as the People’s Uprising in East Germany (Volksaufstand in der DDR), commemorated in Berlin in the name of one its most famous boulevards, Strasse des 17 Juni; and the construction of the Berlin Wall in 1961.

Of course no US depiction of events in Berlin would be complete without a mention of JFK’s ‘Ich bin ein Berliner’ speech – an important sign that the US would not forsake the people of West Berlin.

Keep your eye out for some familiar Berlin sights: Schloss Charlottenburg; the Reichstag; the Soviet Memorial on Strasse des 17 Juni; and Tempelhof Airport for instance.

Also featured is the Protestant Church of the Reconciliation Parish, blown up by the East Germans in 1985 and now the site of the Chapel of Reconciliation (Kapelle der Versöhnung), part of the Gedenkstätte Berliner Mauer.