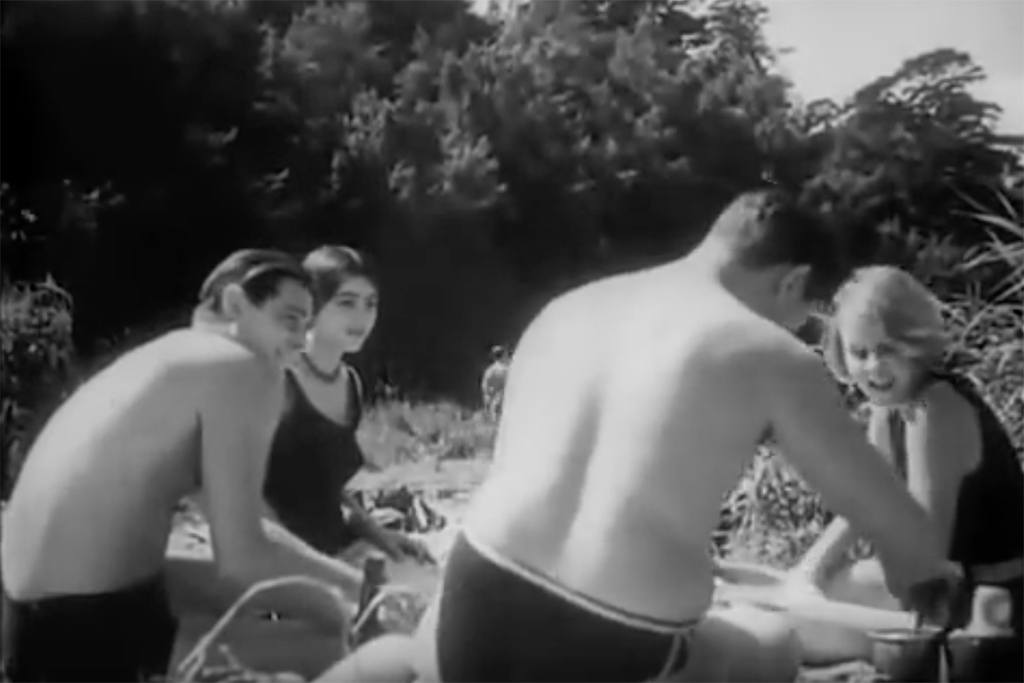 A mixture of documentary and loosely scripted drama, the black and white film, People on Sunday was a surprise hit when it was released in February 1930 in Berlin.

Described in the titles as Film Studio 1929’s ‘first experiment…a film without actors’, the main action in People on Sunday revolves around a day trip to the Wannsee, a large lake on the outskirts of Berlin. It was filmed over the course of several Sundays in the summer of 1929.

The central characters are introduced in the subtitles of the opening sequence:

Brigitte Borchert has sold 150 copies of the record “In einer kleinen Konditorei” in the last month;

Christl Ehrers wears out her heels as a film extra; and

The action starts on Saturday when Wolfgang meets Christl, who appears to have been stood up, at the Zoologischer Garten station, and suggests a date on Sunday. Each brings a friend when they meet up the next day.

The drama between the four day-trippers (Annie is absent throughout), is interjected with footage of bathers at the Strandbad Wannsee and a rather bizarre montage of bottom slapping games and staring contests.

As the film draws to a close the subtitles read:

The screenplay for People on Sunday was written by Billie Wilder, later known as Billy Wilder, who fled Germany when the Nazi’s took power and had a successful Hollywood career, most noticeably as producer and director of Some Like It Hot.

Curt Siodmak (credited as Kurt Siodmak), upon whose reportage Wilder’s screenplay was based, cameraman Eugen Schüfftan and co-directors Robert Siodmak and Edgar G Ulmer also all went on to enjoy international success.

Of them all, only Schüfftan had an established career, having invented the Schüfftan process as used on Fritz Lang’s Metropolis.

As described in the titles, the ‘full version’ of People on Sunday available on YouTube is not the complete original. The originally released version was 2,014m long, while this restored version is 1,839m. Unfortunately:

The original negative has been lost; no complete copy exists.

This version is derived from a copy from the Netherlands Film Museum: the shorter dutch rental version with a length of 1,615m. Missing scenes have been reinserted where possible.

Copies from Cinémathéque Suisse, the Cinémathéque Royale de Belgique and the Fondazione Cineteca Italiana were used for this purpose.

The German subtitles were re-made on the basis of the censorship card.

As well as being a ground-breaking film, like Symphony of a Great City before it, People on Sunday is a valuable document of Berlin during the Weimar era – keep an eye out for a rare glimpse of the Siegessäule, in its old position in front of the Reichstag, which still boasts its original square cupola.