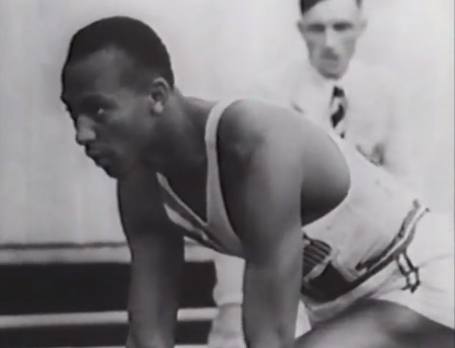 Jesse Owens Returns To Berlin is a documentary written, directed and produced by Bud Greenspan and filmed during a visit to Berlin in 1964, which recounts Owens’ incredible achievements during the 1936 Olympics.

The rise of National Socialism in Germany and Hitler’s anti-semitic policies and advocation of the superiority of the Aryan race resulted in several calls for a boycott of the games.  Against this political backdrop, Jesse Owens’ haul of four gold medals is all the more significant.

For a black athlete to demonstrate clearly his superior athleticism and so convincingly outperform his white counterparts was a massive slap in the face for Hitler and made a mockery of his racist theories during his Nazi showpiece games.

Standing in the box at the Olympiastadion where Hitler sat to watch the games, Jesse Owens tells with pride that the flag of the US team was the only one not to be dipped as the athletes passed the Führer.  It may be my imagination but it seems that Hitler’s jaw twitches as he observes this act of defiance.

It was at 28:48 in this documentary that a legend was born.  Standing in the Olympiastadion with Luz Long’s son Kai, Owens tell the remarkable story (disputed like so many other great tales) of his father’s part in his victory in the Long Jump (then known as the Broad Jump).

Jesse Owens Returns to Berlin is a wonderful documentary that delivers on many levels: it is a fascinating account of sporting prowess, an important historical record and a tale of good beats evil, and for Berlin fans there is the added interest of seeing the Olympiastadion and Lustgarten as they looked during the 1936 Olympics.