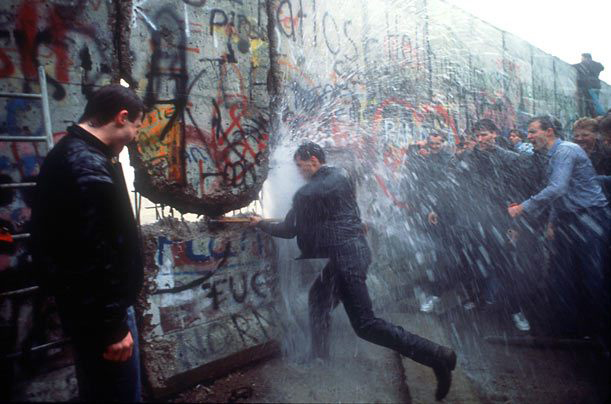 On the 9th of November 1989 the eyes of the world were on Berlin.  TV crews and journalists from all corners of the globe gathered in the German capital to document one of the 20th century’s defining moments – the fall of the Berlin Wall.  25 years on from that incredible night it is only right that today’s Sunday Documentary should be about the Mauerfall. Photographer Anthony Suau was amongst those capturing the scenes of jubilation and euphoria for Time Magazine and he recounts his experiences in The Iconic Photo of the Fall of the Berlin Wall.

As thousands of people gather in Berlin to celebrate the 25th anniversary of the opening of the border that separated East and West it is time to reflect on the events that made it all possible.

Tonight in Berlin the border is visible once more.  The Lichtgrenze (Border of Light), an installation of 8,000 illuminated balloons marks the course a 15km stretch of the wall from Bornholmer Strasse to the Oberbaumbrücke.

Like the Lichtgrenze, on 9th November 1989 it all started at Bornholmer Strasse.

In response to mass protests and a giant tear in the Iron Curtain making it possible for citizens to escape through Hungary into Austria, the East German government decided to relax it’s border controls and allow travel between East and West.  In a fortuitous twist of fate an uninformed Günter Schabowski appeared at his daily press conference and told the gathered reporters about the easing of restrictions.  Asked when the new directive would take effect he replied ‘As far as I’m aware, immediately. Straight away.’

And so the fate of the Berlin Wall was sealed.

East Berliners curious to see the Western half of their city went immediately to the border crossing points and thousands gathered at Bornholmer Strasse.  Harald Jaeger was the guard in charge of Passport Control at the crossing point and under increased pressure from the crowd he disobeyed the orders of his superiors and opened the border.

As a symbol of Berlin, the Brandenburg Gate was a natural gathering point for the celebrations that night.

No doubt emboldened by alcohol, the new sense of freedom afforded to them and a feeling that the guards no longer had the same power over them, revellers climbed onto the wall.  But even that wasn’t enough for some and they began attacking the barrier that had divided the city for 28 years. The wall had fallen symbolically that evening but many were determined to see it fall literally too.

With knives, hammers and pick axes they set about destroying the Berlin Wall.  It was this destruction that was captured by Anthony Suau for Time Magazine in what has become one of the iconic photos of the fall of the Berlin Wall.

The Iconic Photo of the Fall of the Berlin Wall

In the Belly of a Whale – El Bocho
CSI: Berlin