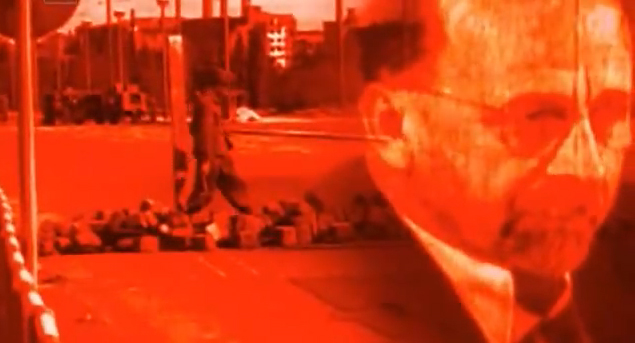 Photo: Still from Declassified – Rise and Fall of the Wall

Shown on the History Channel to mark the 15th anniversary of the fall of the wall on 9 November 2004, Declassified: Rise and Fall of the Wall is a documentary peppered with facts gleaned from then recently declassified files about events.

The documentary starts with a famous quote* from Nikita Kruschev:

I consider Berlin to be the testicles of the West.  When I want the West to scream, I squeeze on Berlin.

* I have seen this more often written as, “Berlin is the testicle of the West.  When I want the West to scream, I squeeze on Berlin.”

It then follows events in the German capital from the division of Berlin between the allied powers following the end of the war in 1945 to the fall of the wall on the night of 9 November 1989.

The evolution of the wall was cleverly shown with the use of computer graphics, though more detailed and sophisticated animations have been made in the years since thanks to technological advances.

The programme mistakenly identifies Rudolf Urban as the first casualty of the Berlin Wall. Urban died in the Lazarus hospital on the 17 September 1961 having contracted pneumonia whilst being treated for the injuries he suffered jumping from his first floor apartment at Bernauer Strasse 1 on 19 August 1961.

Ida Siekmann is the first official casualty of the Berlin Wall.  She died on her way to the Lazarus hospital on 22 August 1961 as a result of the injuries she sustained jumping from the third floor window of her apartment at Bernauer Strasse 48.

Declassified – Rise and Fall of the Wall

A New Berlin App – Is There A Line At Berghain?
MJ’s Foodshop – My Favourite Berlin Club