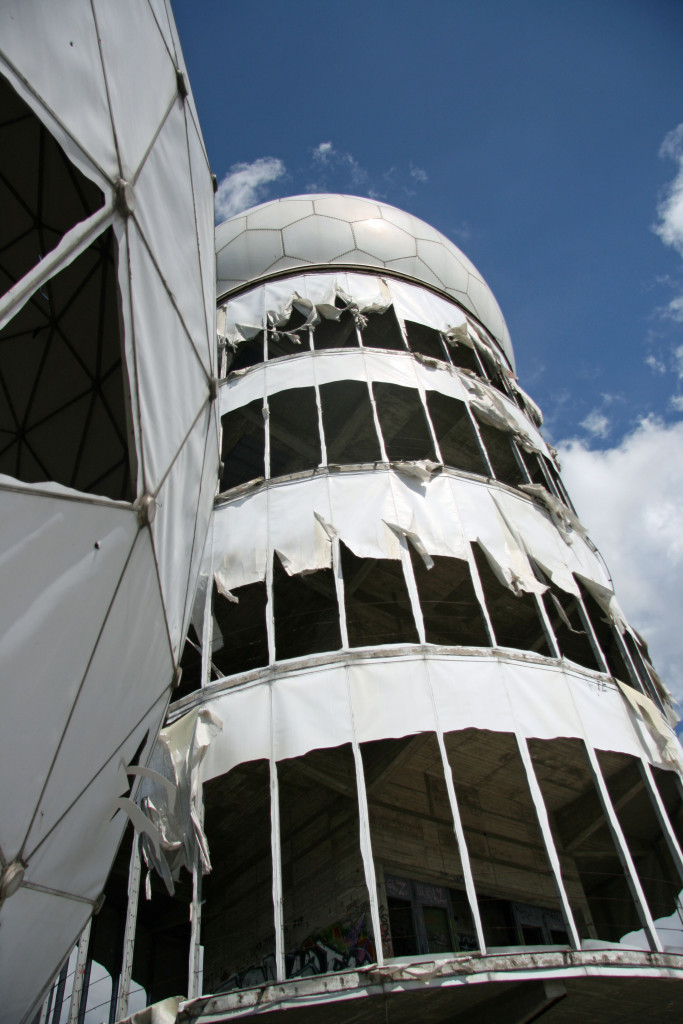 The first time I heard about the Cold War listening post on Teufelsberg (German for Devil’s Mountain) was watching the BBC ‘Berlin’ documentary by Matt Frei.  Standing in the tower below one of the listening domes, with the canvas sheeting flapping about him in the wind, Frei explained the history of the listening post and the mountain of rubble it stands upon and I was determined to go there when I next visited Berlin.

The Teufelsberg was formed of the rubble deposited at the edge of the Grunewald forest at the end of World War II, as the Allies cleared it from Berlin.  Some estimates suggest that there is as much as 12 million cubic metres or the equivalent of 400,000 houses there.

The Teufelsberg was in the British Sector of West Berlin but the NSA was allowed to build a listening post at the top of the mountain, which reportedly allowed them to listen to conversations carried out up to 300 miles away across East Germany.  The East Germans and the Soviet Union had similar listening posts on The Brocken, the tallest peak in the Harz mountain range in Northern Germany.

I set off on a sunny day in July to see this relic of the Cold War for myself.  Having researched the location on the internet I caught the S-Bahn to Grunewald and set off into the forest.  It didn’t prove easy to find but once I started climbing I knew I was on the right track and my first site of a white dome above the trees was a welcome indication that I was almost there. 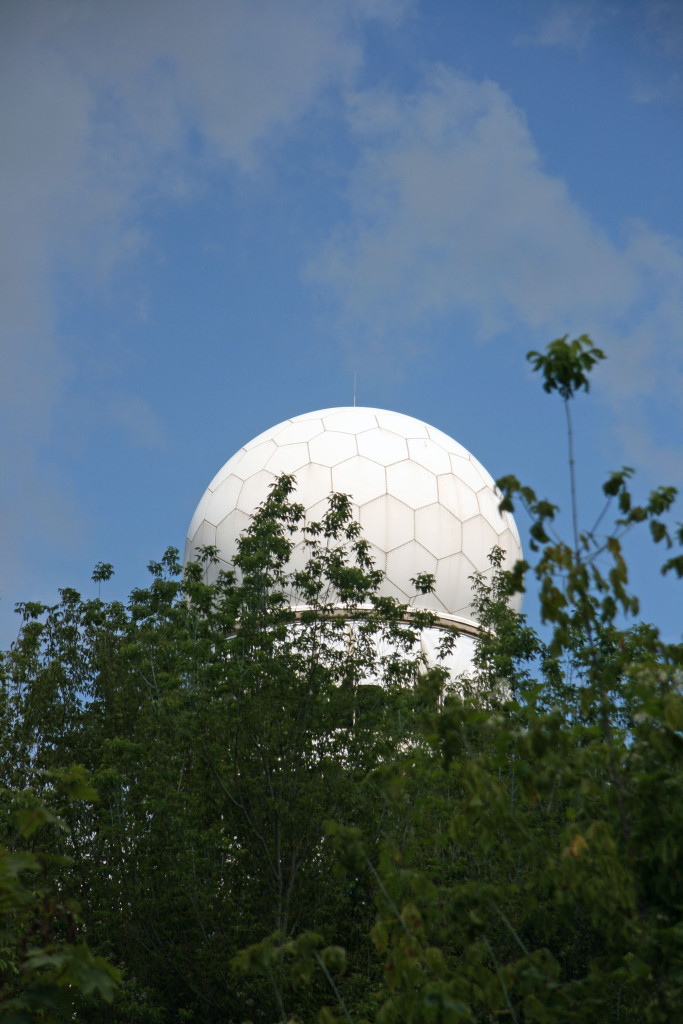 Having reached the peak, I walked around the fence surrounding the facility looking for the man-sized holes my research had indicated I would find.

As I completed my first circuit and returned to my selected entry-point I saw a man move away from his wife and daughter towards the same spot.  As we climbed through the gap he explained that his daughter had explored the site a couple of weeks previously and her adventure had prompted him to come.

We climbed the steps of the building closest to us looking for a way in and as we looked back across the site we got the first of many great views.  Despite having a companion I still felt a frisson of excitement knowing that we weren’t meant to be here. 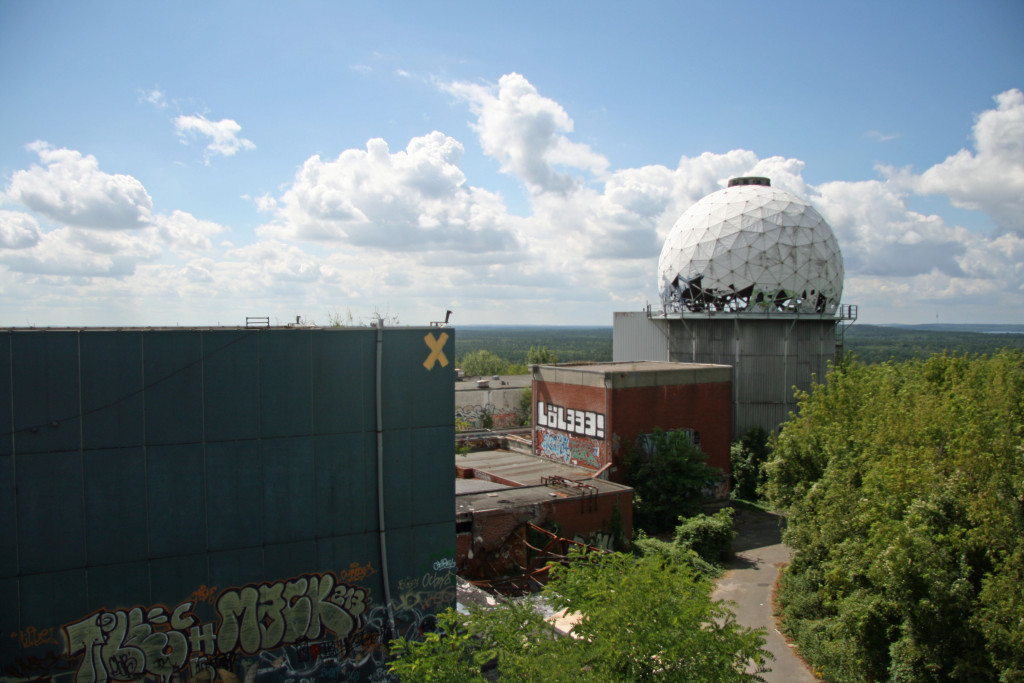 Having found a way into the building I was surprised to find sections with whole walls missing and a lift shaft with its doors prised open to reveal a drop into space that would surely result in death.  But I shouldn’t have been surprised.  This is why the site was off limits and the signs on the fences indicated that Trespassing is Not Permitted (Betreten und Befahren Verboten).  And why I had squeezed through a gap in fence instead of introducing myself at the gate and asking if I could have a look around.

As we climbed out onto the open roof of the building my companion was explaining that he would shortly be going to England to take part in a shooting competition at Bisley.  Emerging into the sunlight we were afforded a panoramic view across the Grunewald forest all the way back to Berlin and the Fernsehturm and its, by comparison short Western counterpart, the Funkturm and all thoughts of conversation were forgotten. 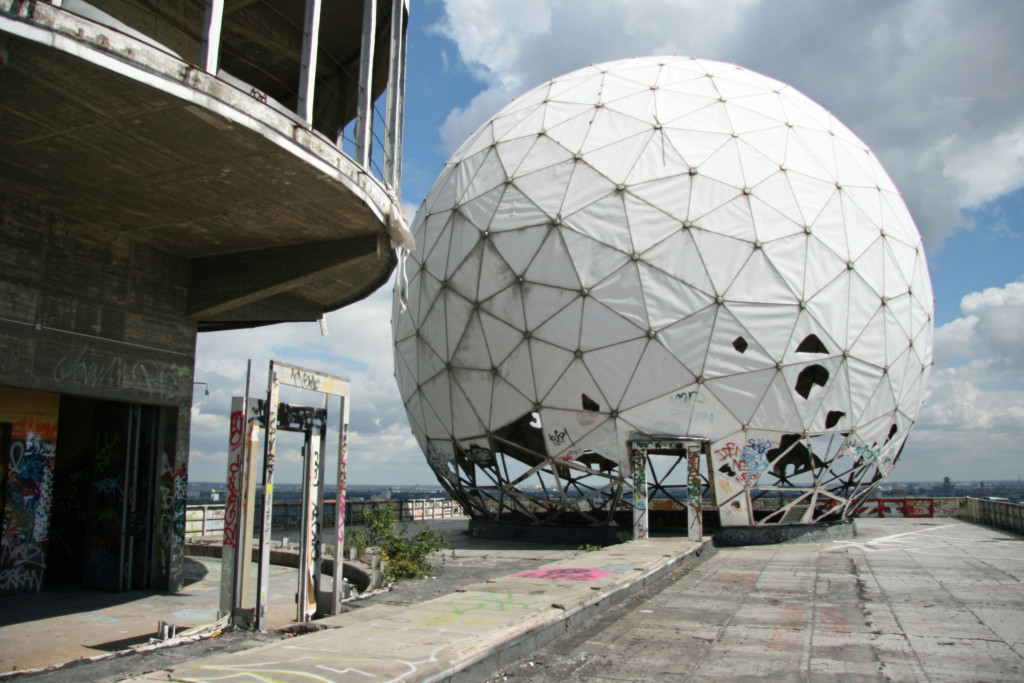 We walked our way around the rooftop and into each of the domes accessible here and having done so climbed another flight of steps up the tallest of the towers.  This was where I had seen Matt Frei presenting.  I climbed the last few flights of stairs to the top of the tower on my own, as my fellow explorer explained that he was scared of heights and had pushed himself to his limits.  The extra effort was well worth it.  The uppermost dome was the most well-preserved of all I had seen so far, although this still had an open space where a door should be.  As soon as I stepped out of the staircase I was confronted by the crack-like echo of my footsteps in the cavernous domed enclosure.

My companion was waiting for me as promised when I found my way back to the rooftop level and having seen all this building had to offer we climbed back down to ground level together.

It was as we headed to the next building that we saw a maintenance worker and decided that we should cut our losses and leave.  Best not to test the German Trespass laws I thought. 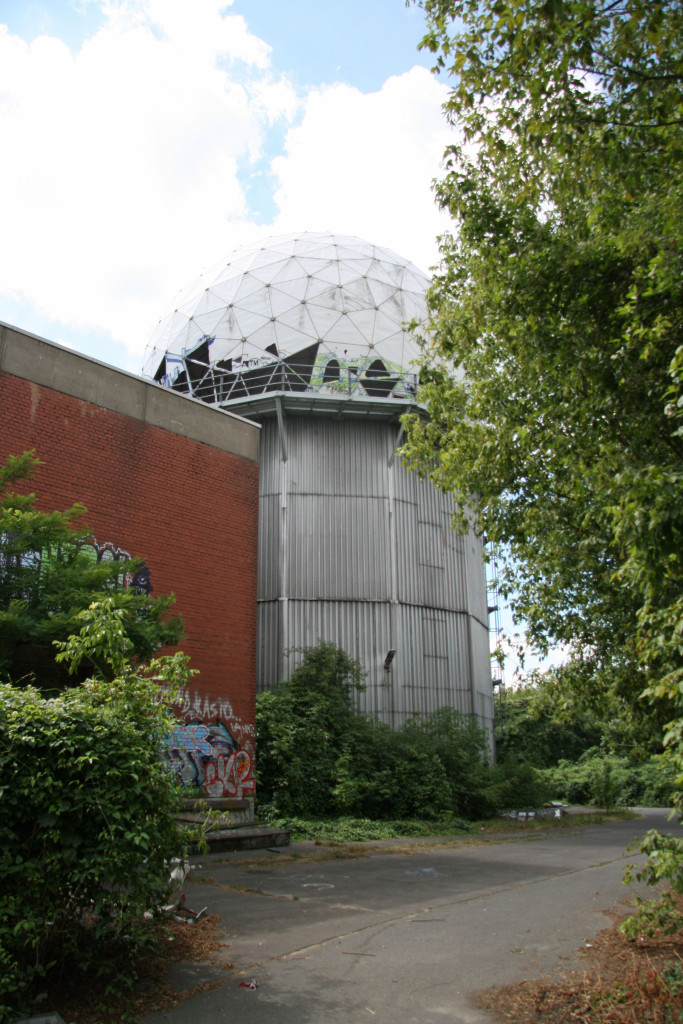 Having left my fellow explorer with his wife and daughter at the fence and set-off down the mountain alone I felt a sense of achievement and excitement that is difficult to explain and stayed with me all the way back to Berlin. 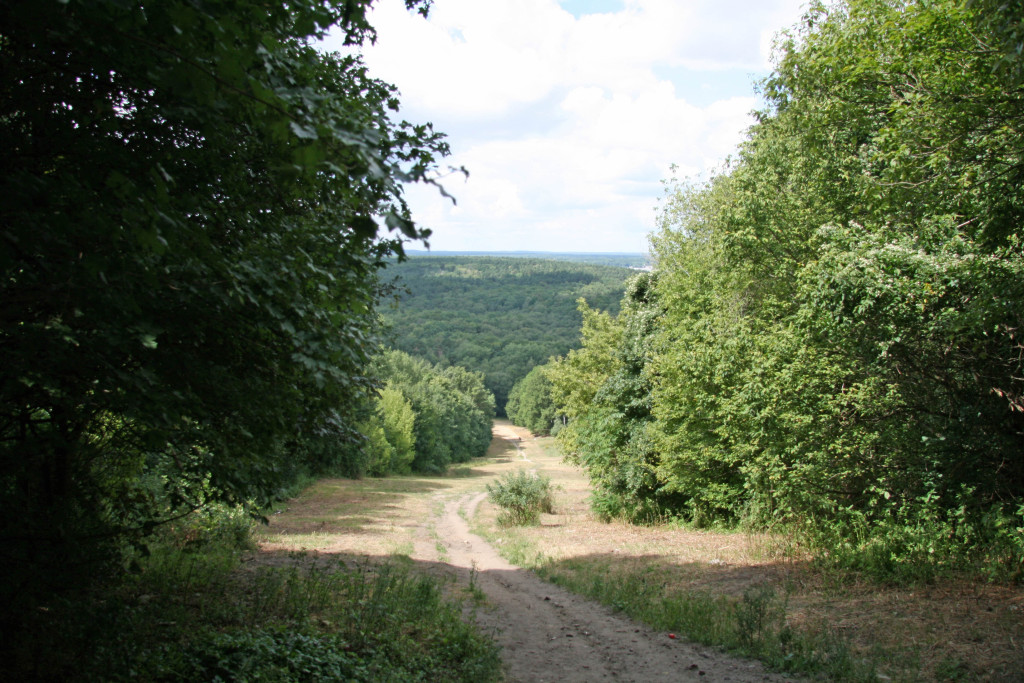 There are now organised tours at Teufelsberg and one day when the weather improves I hope to take one but somehow, I don’t think I’ll experience the same thrill knowing that I’m allowed to be there.

All of my favourite photos from that day are in the Teufesberg – 2010 Photo Gallery.

Update: I have since returned to Teufelsberg and taken part in one of the organised tours.  As I suspected it didn’t give the same thrill but I did get to experience the same incredible views and surroundings.  Security is now tight at the Teufelsberg and sneaking in may not be such a pleasant experience, as this post by the Irish Berliner on Abandoned Berlin explains.  Think carefully before making the trip from Berlin if you’re thinking of breaching the fence to dance with the devil and explore the former NSA listening station.

4 Responses to Teufelsberg (The Devil’s Mountain)