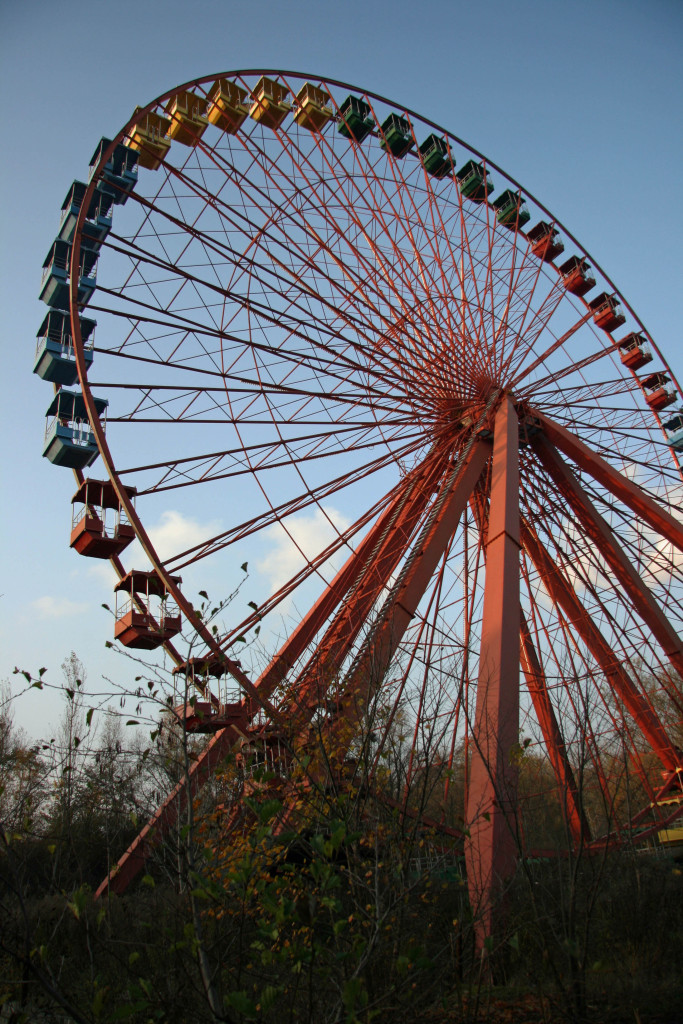 I first read about this abandoned Theme Park in Berlin on Berlin Unlike when I was checking out places to see before my visit to the city at the end of July 2011.  I went to the Spreepark Plänterwald during that trip but there were lots of people there setting up for the Set Us On Fire festival (which was subsequently cancelled)so I had to settle for taking pictures from outside the fence.

Frustrated at not being able to get up close and personal with the things I had seen, I did more research and found out that there were organised tours of the park so this was high on my agenda when I arrived in Berlin on 30 October 2011.

I got in touch with Christopher who runs the tours through the Spreepark website.  He sent me an e-mail to confirm that I had a place on the tour the next day with the meeting point and time (please note: as stated on the website replies are only sent on Wednesdays and Fridays).

I had checked the weather forecast before booking the tour and as promised when I woke up the sun was shining (but it was cold), perfect for taking some photos.

I caught a tram and two trains to get from my flat in Prenzlauer Berg to Plänterwald S-Bahn station and walked through the forest to the Spreepark.  I had arrived early so I took a seat on one of the benches outside the Cafe Mythanos until people started to assemble for the tour.

Having paid our 15 Euros we were all gathered together for the introduction.  I would love to tell you what Christopher said but he was speaking in German and I haven’t spent enough time studying to understand what he was saying yet.  I think it was when we were standing near this first ride that the use of the park as a location for the film Hanna and numerous music videos was first mentioned. 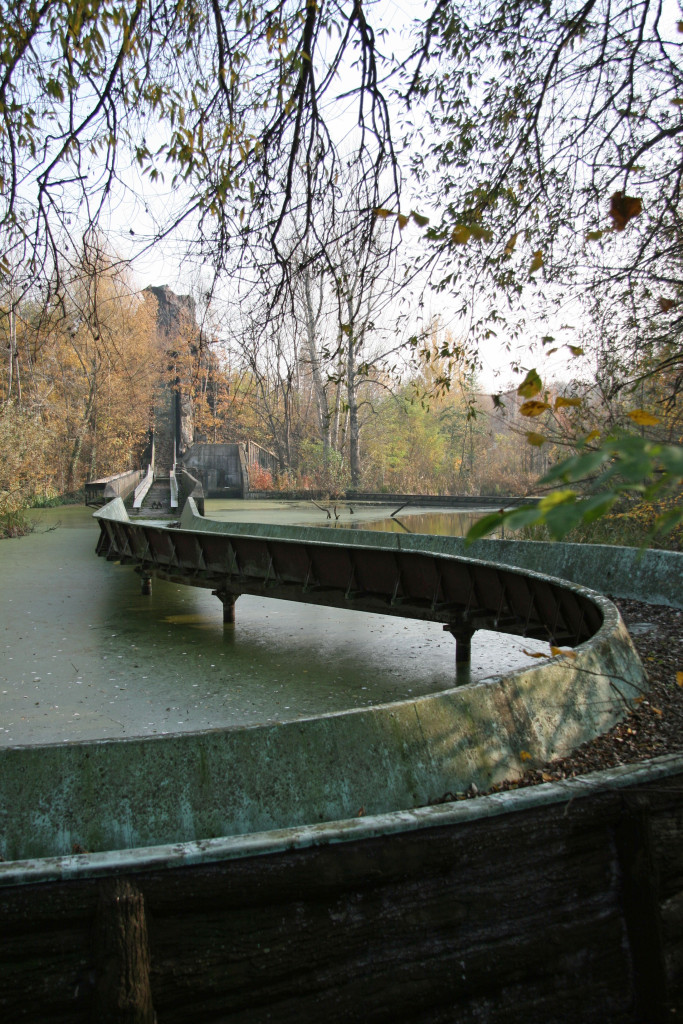 As we wandered through the Park we would stop at points of interest and presumably hear more about the Spreepark’s history and the rides.  Having read some of the stories on the Spreepark website and others I have an idea of what was being said.

A theme park was first opened on the site in 1969 as Kulturpark Plänterwald and continued as such until the fall of the Berlin Wall in 1989.  At this time the park was taken over by a company headed by Norbert Witte.  The park underwent extensive improvements and after an alleged investment of 40 million DM re-opened in 1991.

The park ran into financial difficulties and in 2002, Witte, along with his family and many of his associates took some of the rides to Peru with plans to open a park there, unaware that the electricity supplies in Germany and Peru were not the same.  In an attempt to recoup some of the losses of this failed enterprise Witte packed 180kg of Cocaine into his Flying Carpet ride when he shipped it back to Europe and was caught.  He was sentenced to seven years in prison for his part in the smuggling attempt and his son Marcel was sentenced to twenty years by a Peruvian court.

One of the pictures that had caught my attention in the Berlin Unlike article and made me want to visit was this ride with the track coming out of a psychedelic cat’s mouth.  I had been waiting eagerly for us to arrive at it all through the tour and had to wait a while to get a shot not crowded with other people taking photos. 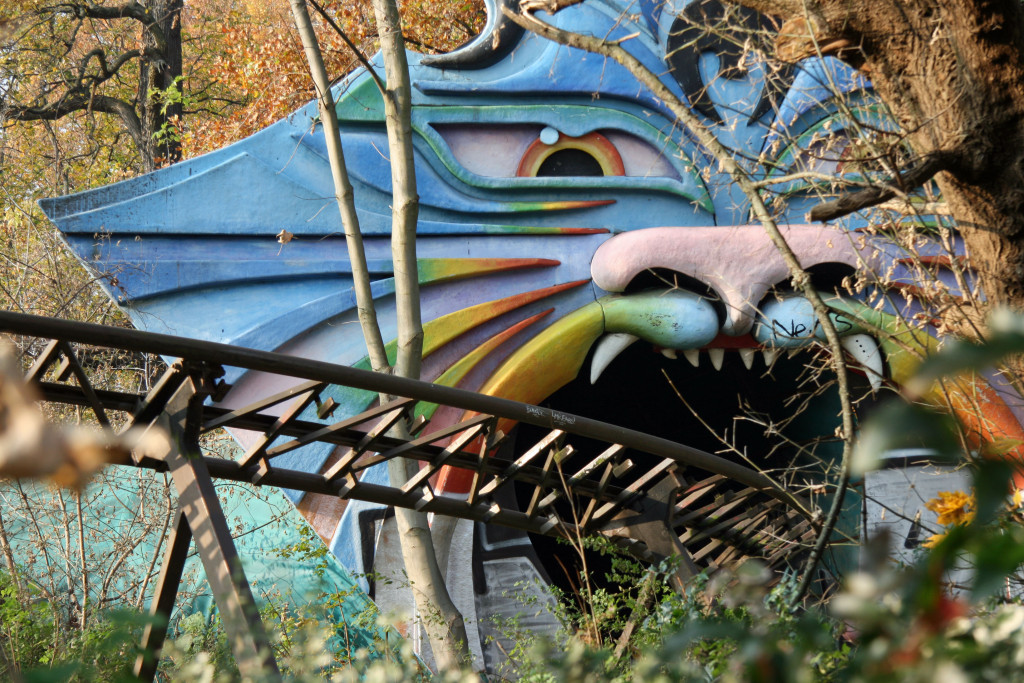 The park seemed to have something for everyone: a dinosaur park, a floating swan ride and what seemed to be a Viking boat with a Dragon figure-head. 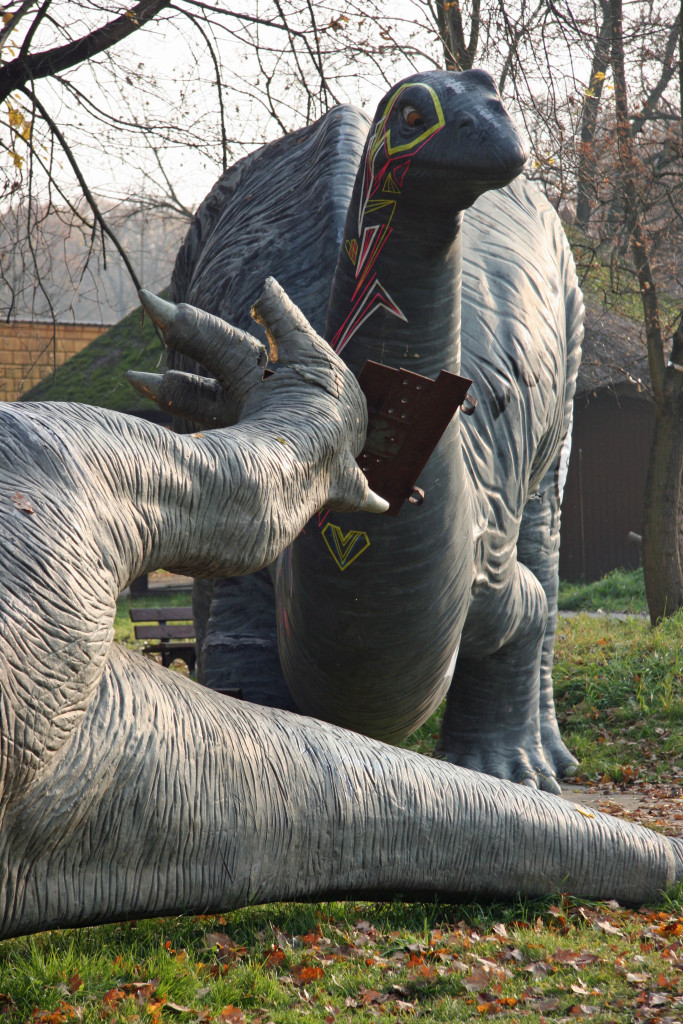 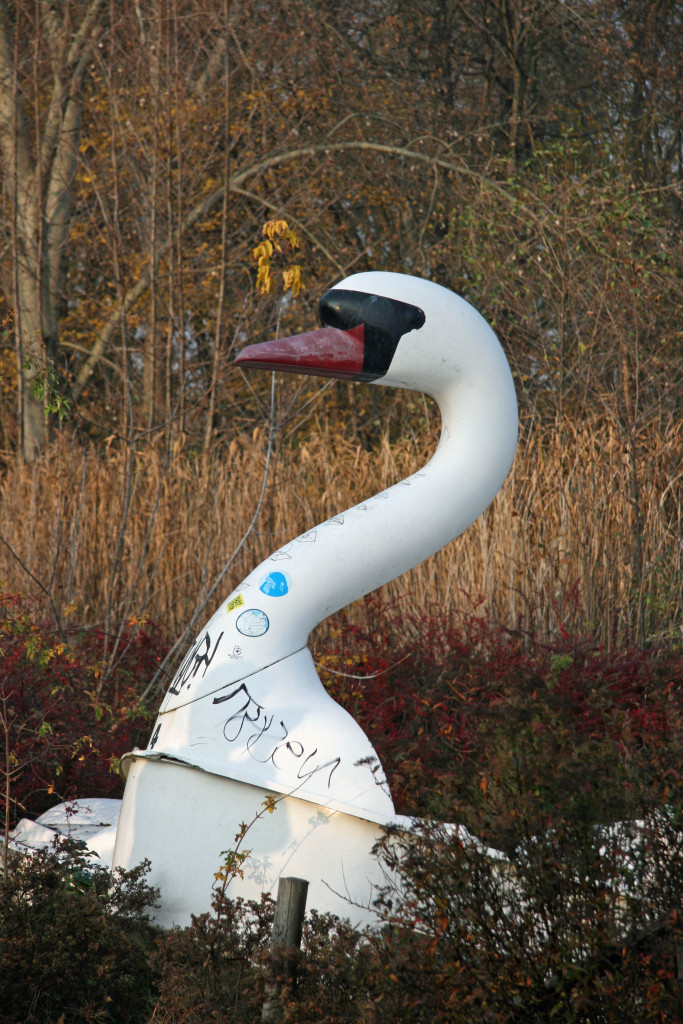 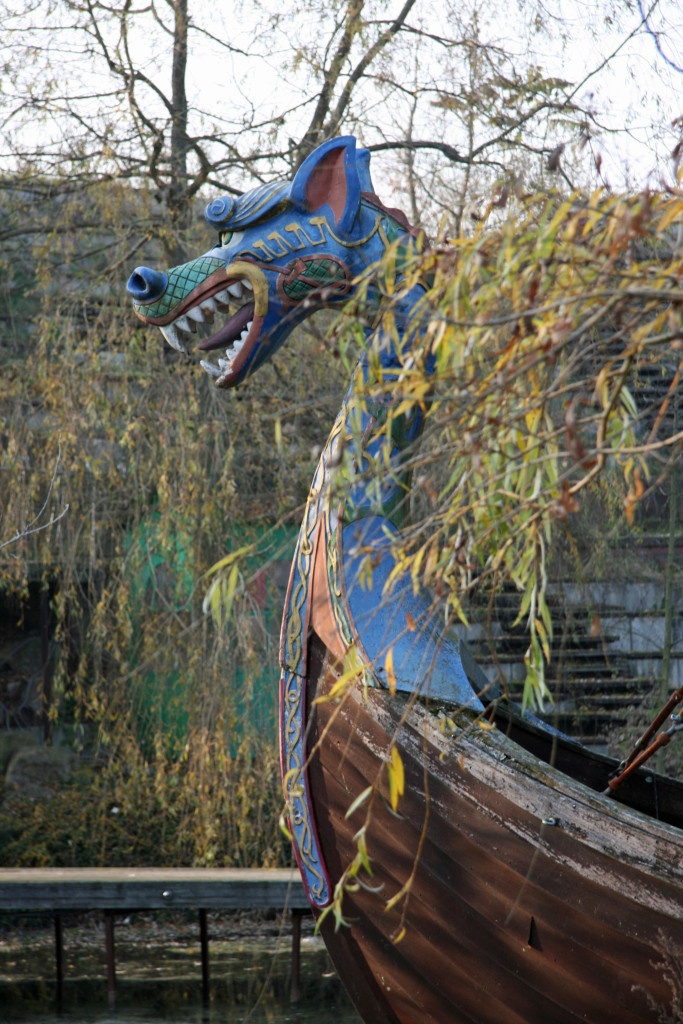 I can imagine that it would have been a wonderful attraction in its prime.  I was particularly amused when we stopped at the English Village attraction.  A kind of medieval village pastiche with, bizarrely, a sign indicating we were at Picaddilly Circus.

Having deposited us back at Cafe Mythanos and recommended the hot drinks and snacks on offer Christopher also suggested a ride on the park’s train, which costs 2 Euros. 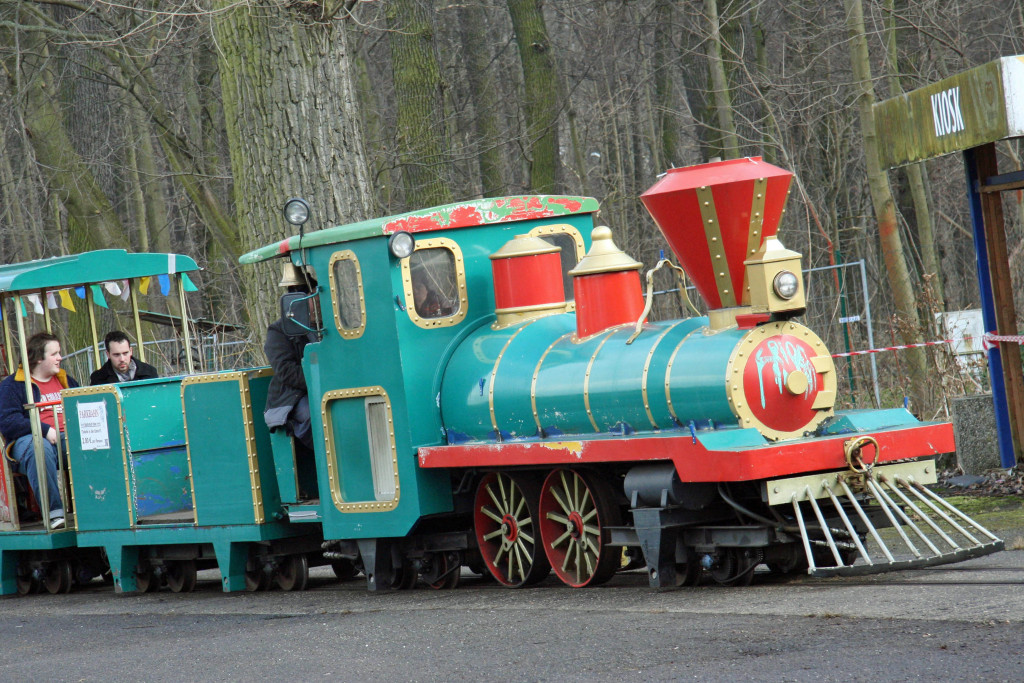 The little train, the Spreepark Parkbahn, takes a route mostly around the perimeter of the park but offers some new angles of rides already seen on the tour and the opportunity to see a few new things.  It was whilst riding the train that I leaned over the edge holding the camera at arms length and optimistically snapped the Ferris Wheel again in the hope of capturing the effect of the dying light. 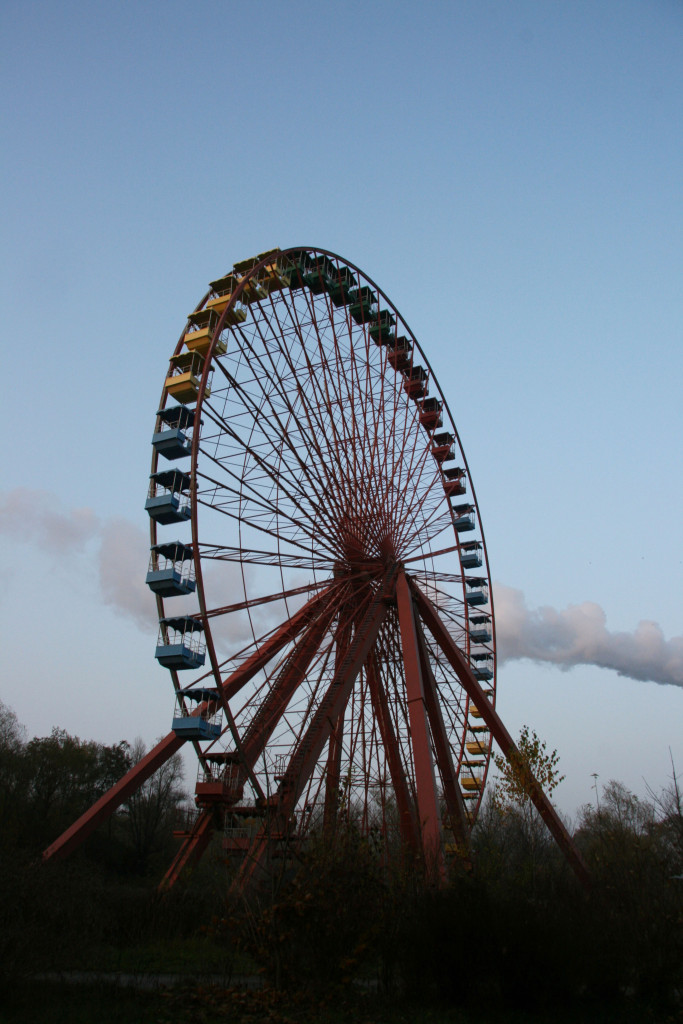 Overall, I think the tour was well worth the 15 Euros and the trip to Spreepark Plänterwald but I think would be even better with a good understanding of German.  My fellow tourists seemed very interested in Christopher’s insights and (judging by the laughter) amusing anecdotes.

You can see all of my favourite photos from my visit here.

To learn more about the intriguing story of this abandoned theme park in Berlin, I would recommend watching the documentaries Der Letze Cowboy der Nation and Achterbahn, which both tell the history of Spreepark, albeit from slightly different perspectives.

To blog or not to blog
Teufelsberg (The Devil’s Mountain)