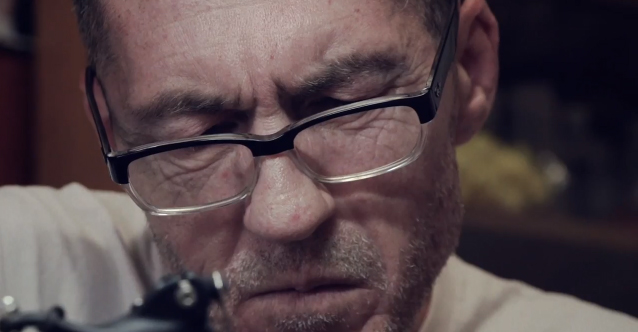 Growing up in East Berlin under DDR rule, Kalle describes himself as ‘a public enemy’, and it was whilst imprisoned for his political views that he learned how to tattoo from an older inmate who recognised his artistic talents.

Tattoos were not tolerated in the East German prison system and inking or being inked was punished by 3 weeks solitary confinement in the ‘Bunker’.  Kalle was serving out one such punishment when he learned of the fall of the wall, an event that would dramatically alter his life and facilitate his new career.

My second life started that day. Before that, I didn’t have a life.

The walls of Kalle’s shop, Oldschool Tattoo Berlin, in his native Friedrichshain are decorated with the homemade tattoo needles used by youths in the DDR during his childhood, though these days the equipment he uses is obviously more sophisticated.

Ostblut is a cracking documentary on many levels: Kalle’s is a fascinating story and an interesting portrait of life in Berlin before and after the fall of the wall; it is artfully shot and creatively put together; it has a pulsating soundtrack ideally suited to the film – my only criticism, I wish there was more of it.