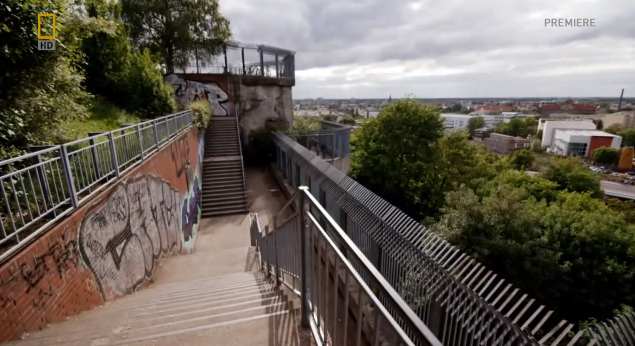 The National Geographic documentary, Nazi Megastructures – Fortress Berlin, tells how, determined to fight on to the bitter end, Adolf Hitler, with the help of his architect, Albert Speer, attempted to turn Berlin into a fortress with World War II approaching its conclusion.

Having turned the tide in the war, the Red Army was making significant progress into Germany.  At Seelower Höhen (Seelow Heights), near the Polish border, irrigation ditches were widened to act as tank traps, slowing down the Soviet army’s advance on Berlin.

The outer ring of Berlin’s defences was a natural obstacle, the Teltowkanal (Teltow Canal), and considerable armaments have been amassed at Flughafen Berlin Tempelhof (Tempelhof Airport).

The city was further protected by three enormous Flak Towers, concrete monoliths mounted with heavy artillery, of which only the Flakturm in Humboldthain park remains today.

At the centre of Hitler’s defences is the Führerbunker, from where he directs his forces in their last desperate attempts to hold Berlin.

A mixture of archive footage, computer reconstructions, and expert opinions with the likes of a tour guide from Berliner Unterwelten (who offer tours of the surviving Flakturm, as wells as other architectural treasures under Berlin) Nazi Megastructures – Fortress Berlin is a fascinating portrait of Hitler’s ultimately futile defence plans.