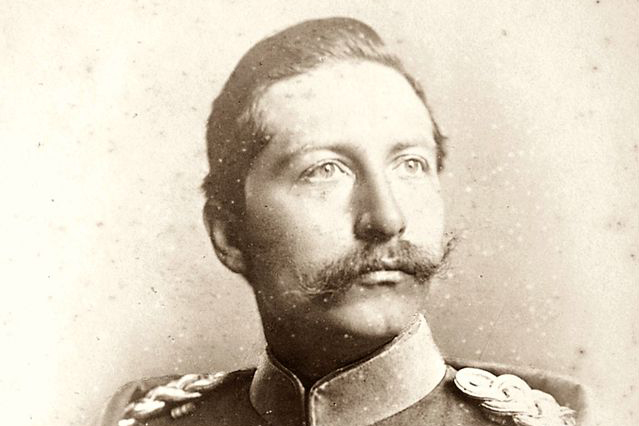 The Real Kaiser Bill: Wilhelm II of Germany, a documentary for Channel 4 in the UK tells the story of Germany’s last Emperor, Wilhelm II from his birth in 1859 in Berlin to his death in 1941.

The son of Queen Victoria’s eldest daughter, Wilhelm suffered from Erb’s palsy – which left him with a withered and stunted left arm – due to complications from a breech birth.

Wilhelm was a frequent visitor to Great Britain and his appointment as Admiral of the British Fleet and appreciation of the Royal Navy influenced his own decision to develop Germany’s naval powers.

Despite his admiration for the British aristocracy and longing for the approval of his grandmother, Wilhelm’s shortcomings in diplomacy and foreign policy ultimately led him to view the British as rivals.

He led Germany, though reluctantly it would seem, into war in 1914 but he was an ineffectual leader and allowed his generals to dictate military strategy.

The German people blamed Wilhelm for a marked turnaround in the country’s fortunes during his reign and fearing reprisals he abdicated in November 1918 and fled to Doorn in the Netherlands, where he lived out the remainder of his days in exile.

At the time of his death in 1941, the former Kaiser, Wilhelm II was a supporter of the Nazi party and Adolf Hitler, whose anti-semitic attitudes he shared.