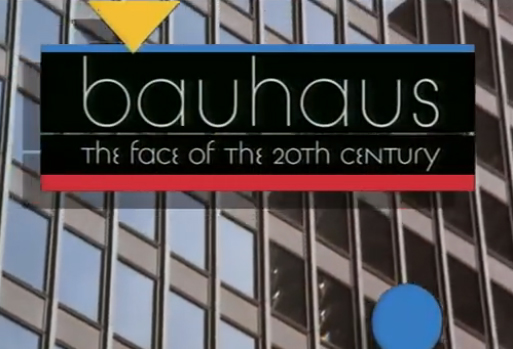 Source: Titles from the documentary ‘Bauhaus: The Face of the 20th Century’

Bauhaus: The Face of the 20th Century, a 1994 documentary, traces the development of the Bauhaus movement from its formation in Weimar by Walter Gropius to the establishment of the Bauhaus School in Dessau to its last stand in a derelict factory in Berlin.

Like so many aspects of life in Germany in the first half of the twentieth century the Bauhaus was affected by the political situation in the country – its lifecycle mirrors that of the Weimar Republic.  Berlin-born architect Walter Gropius formed his ideas of simplistic design with an altruistic ideology following his service in the army during World War I.  He first put his ideas into practice in 1919 in Weimar, the political centre of the new Germany.

The growth of National Socialism in the area around Weimar and the school’s opposite political views effectively forced the Bauhaus to move to Dessau where a new building, which fully reflected the movement’s philosophy and designs was to be its new home.

Unfortunately, that wasn’t to be the end of the Bauhaus’s struggle with the Nazi party.  The school in Dessau was also forced to close and became a training school for party functionaries.

Gropius was able to gather an impressive faculty of important names from the fields of art, design and architecture including Paul Klee, Wassily Kandinsky, and Mies van der Rohe, who was to be the school’s last director.  He found new premises in Berlin, a derelict factory in Steglitz, and moved operations there in 1932.

The reprieve was short-lived and the Bauhaus was forced to close its doors forever when the Nazis again intervened in 1933, the year they came to power in Germany.

Though its tenure was unfortunately short, the Bauhaus movement has had a far-reaching influence on modern art, design and architecture.  Its mark can still be seen in Berlin – the Hansaviertel, Gropiusstadt and Neue Nationalgalerie all bear its architectural fingerprint.  And of course there is the wonderful Bauhaus Archiv, with an extensive collection of Bauhaus objects and designs.

Bauhaus: The Face of the 20th Century