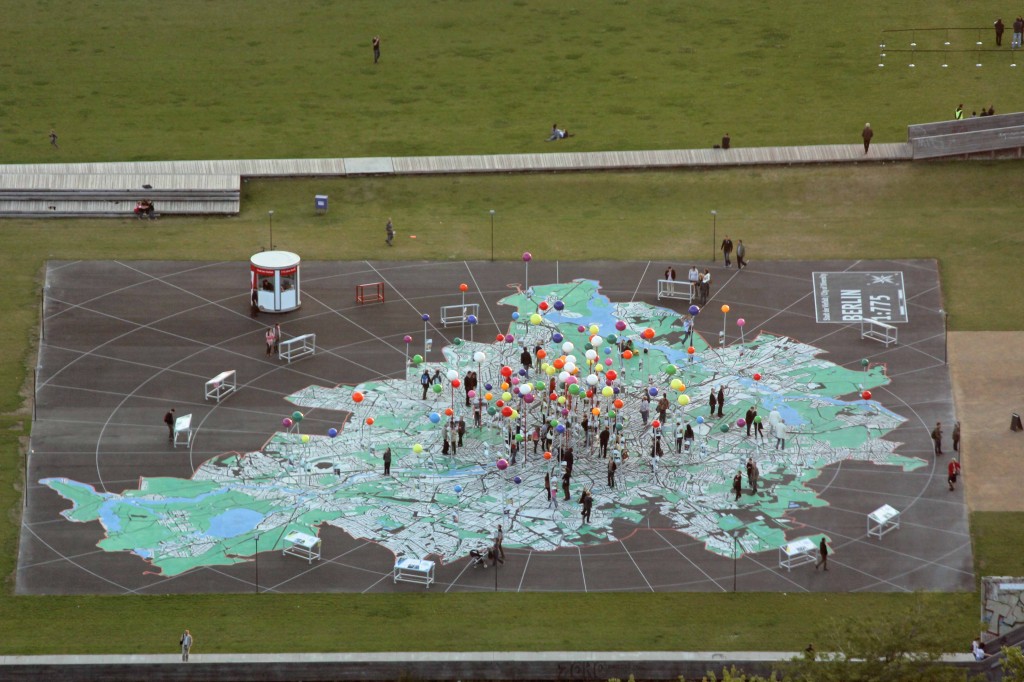 As soon as I heard that a large-scale map of Berlin was being created on the Schlossplatz, entitled City of Diversity (Stadt der Vielfalt), as part of the city’s 775th anniversary celebrations I was fascinated to see how it would turn out.

Over the course of the next 9 days I went to the Schlossplatz 3 times to see how the group of artists were progressing with their work. 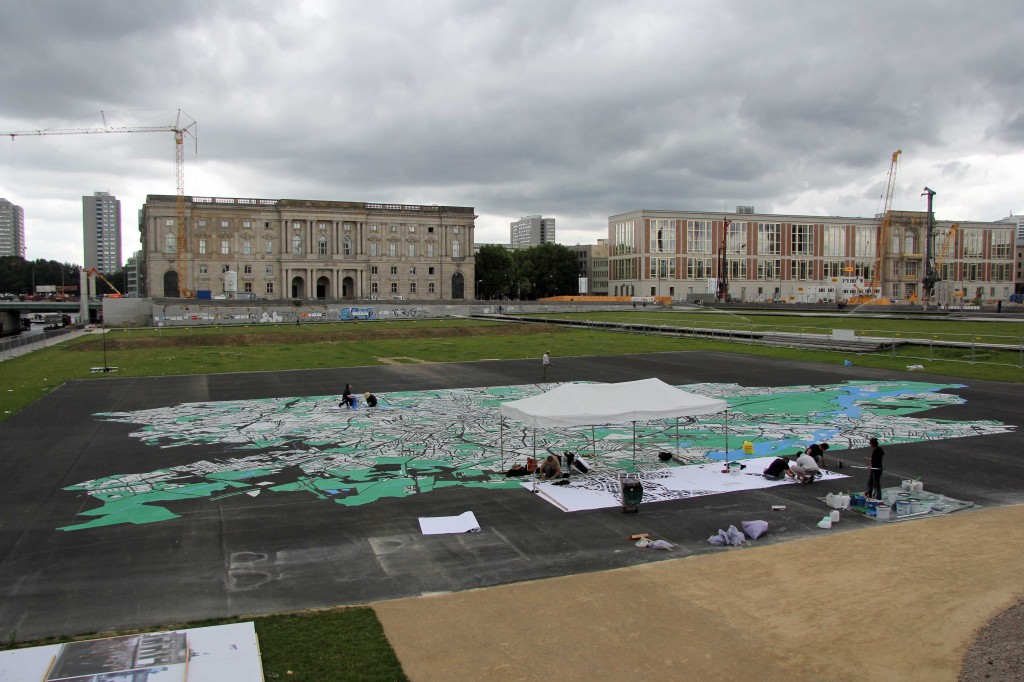 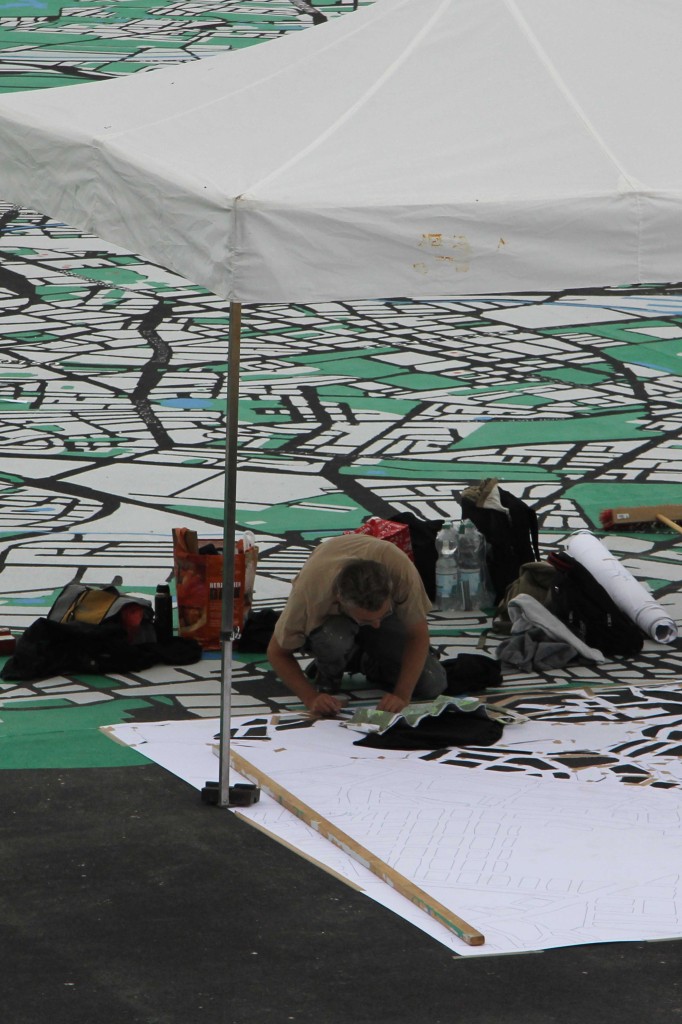 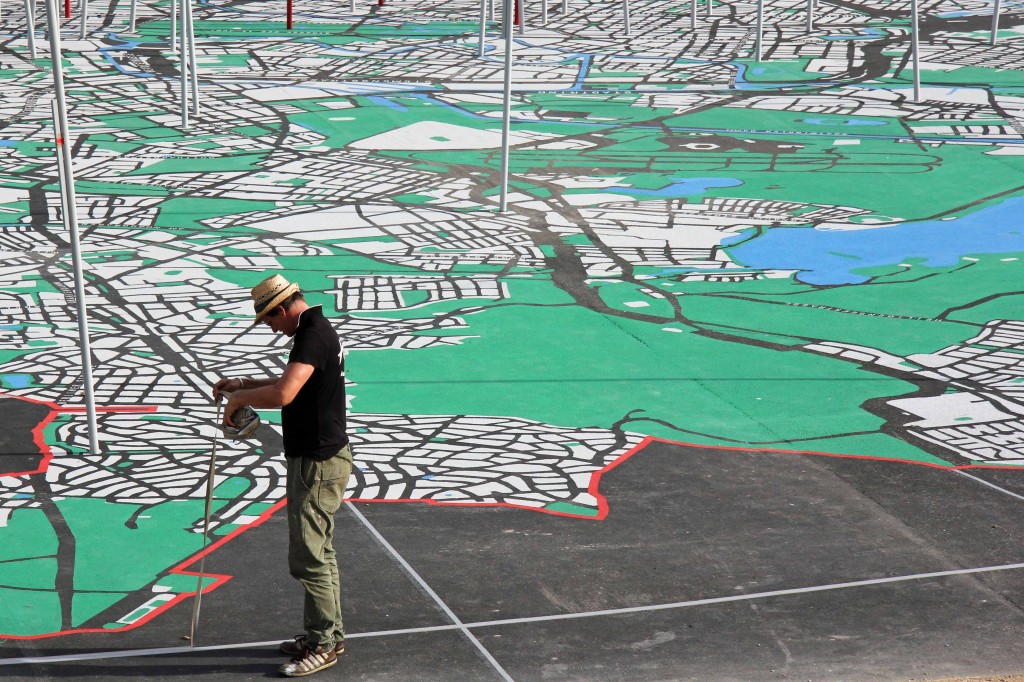 Unfortunately, I was out of the country when the finished map was opened to the public but was keen to visit when I got back to Berlin. 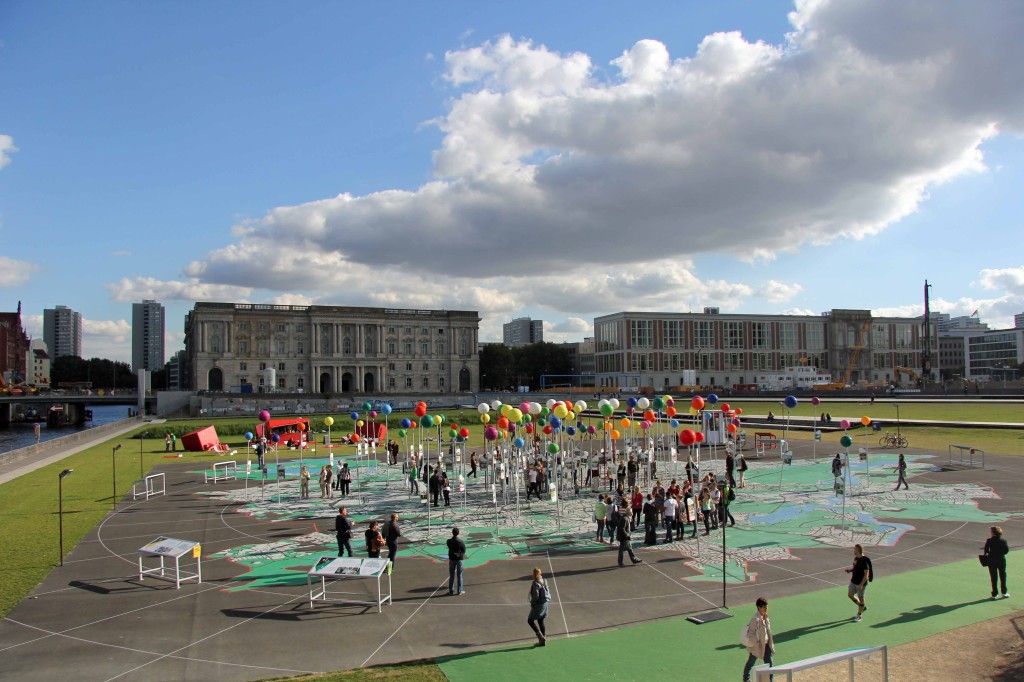 The map has been created on a 1:775 scale on the ground opposite the Berliner Dom (Berlin Cathedral) where work will begin on the Humboldt Forum in 2013. 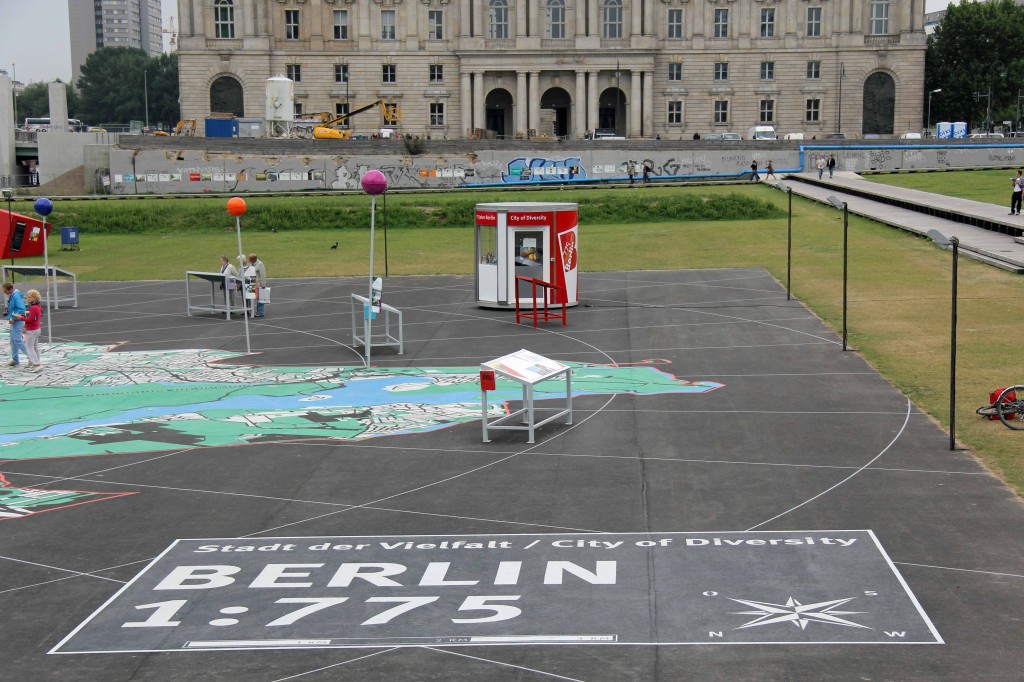 An area measuring 50 metres by 50 metres was set aside for the map that was created using 274 stencils, each measuring 3.5m by 1.5m.

The purpose of the map is to celebrate the contribution of Berlin’s immigrant population to the development of the city from the first settlers, through the Huguenots to the current influx of creatives and internet entrepreneurs.  An important gesture at a time when newspaper reports sensationalise anti-tourist and anti-immigrant feeling amongst a minority of Berliners. 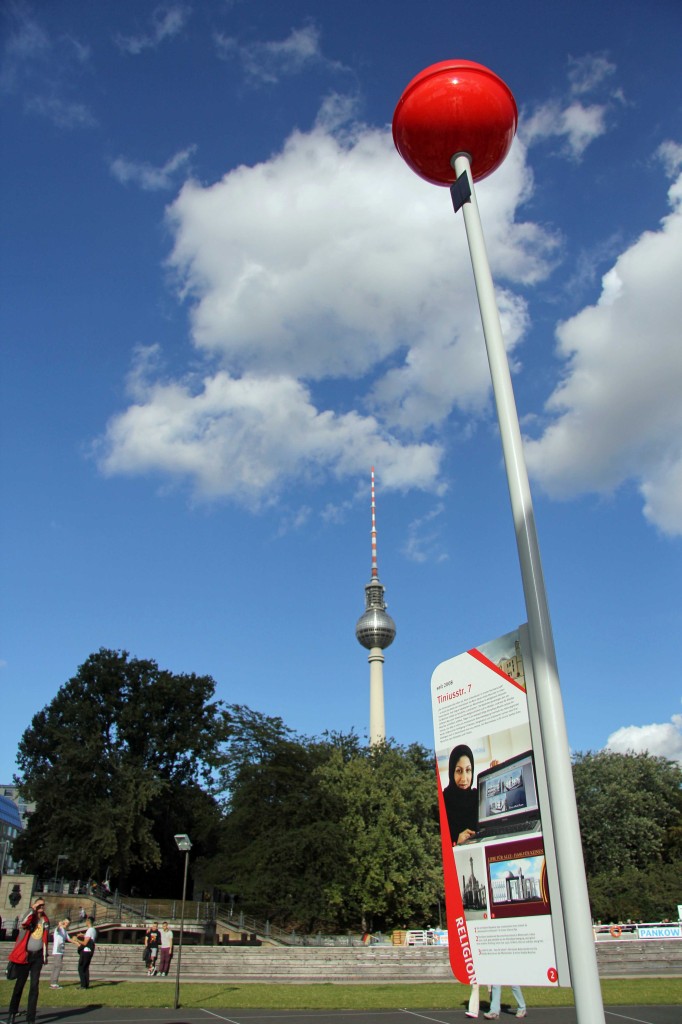 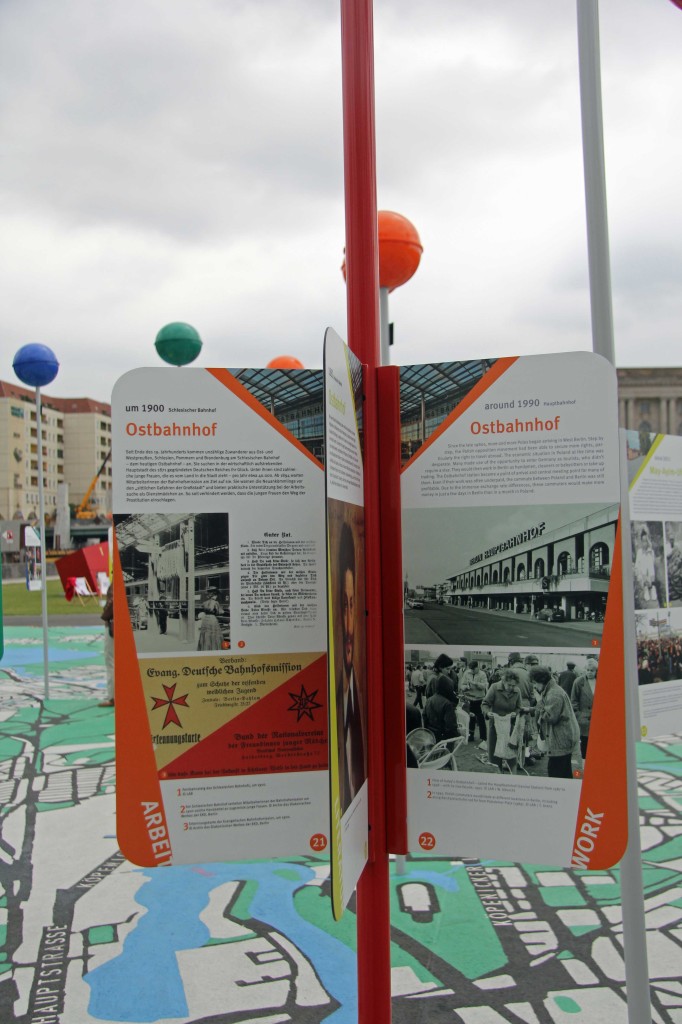 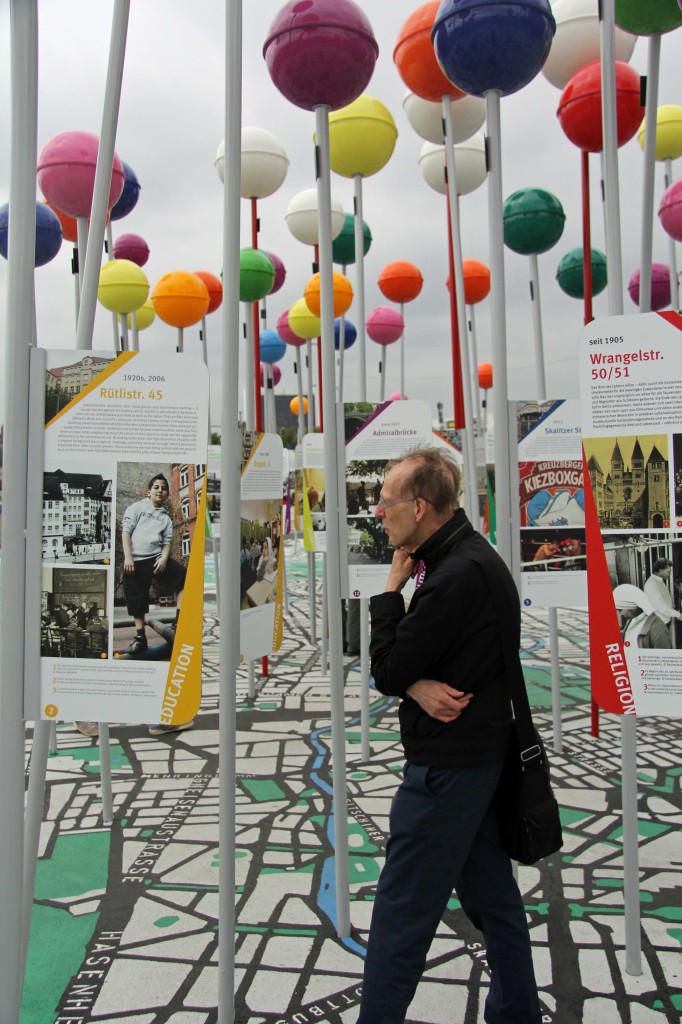 A series of poles embedded in the map pin-point some of the contributions immigrants have made.  For instance, Daniel Josty who came to Berlin from Switzerland in 1818 and established a brewery near Prenzlauer Tor in 1820.  It was Josty who created the Berliner Weisse, a mix of beer and woodruff or raspberry syrup that is a Berlin speciality drink.

Naturally, one of the first things I did when I finally got to stand on the completed map was to find my own little bit of Berlin.  A few of the main streets are named so working out where you live shouldn’t be too difficult. 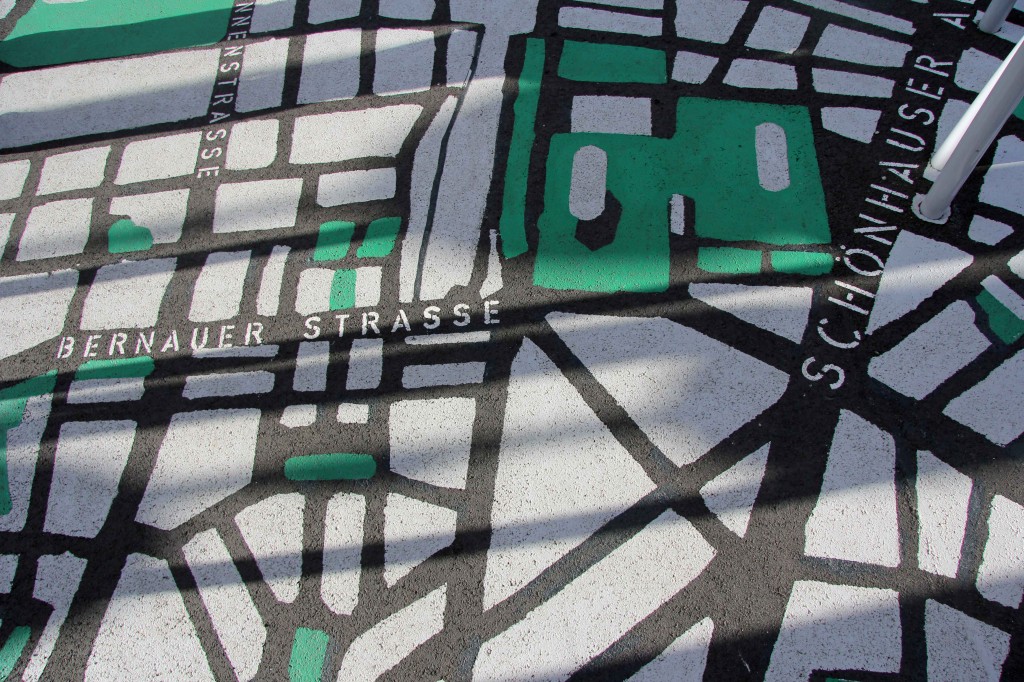 It wasn’t until my final visit that I noticed a display of postcards on the wall as I faced the Berliner Dom with people’s Berlin memories written on them.  Naturally, a lot of the cards were written in German but a couple of the English musings caught my eye. 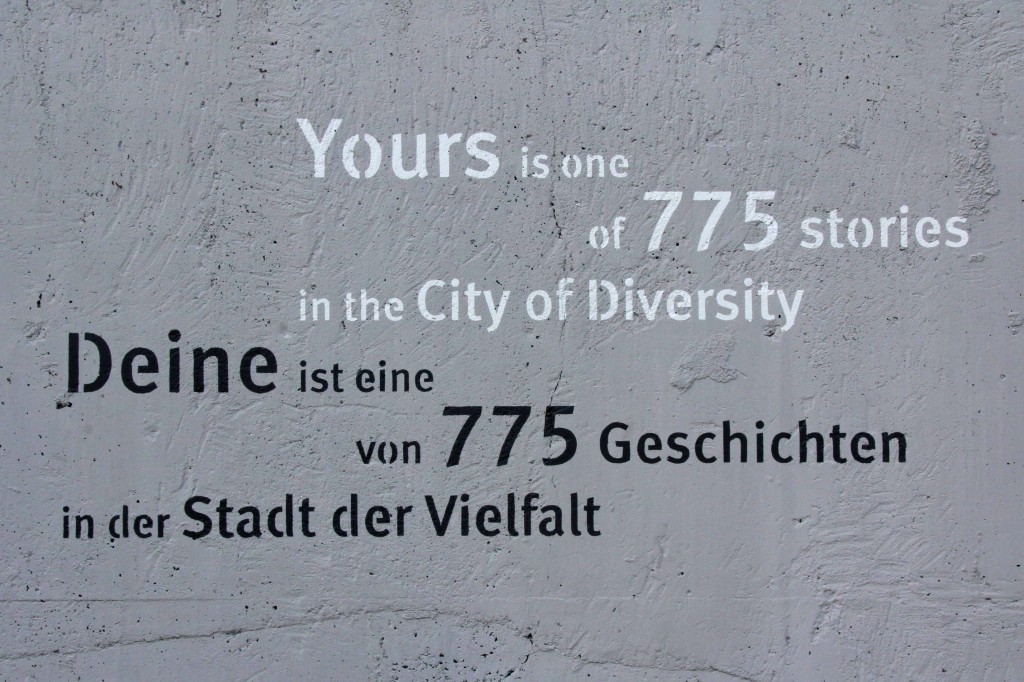 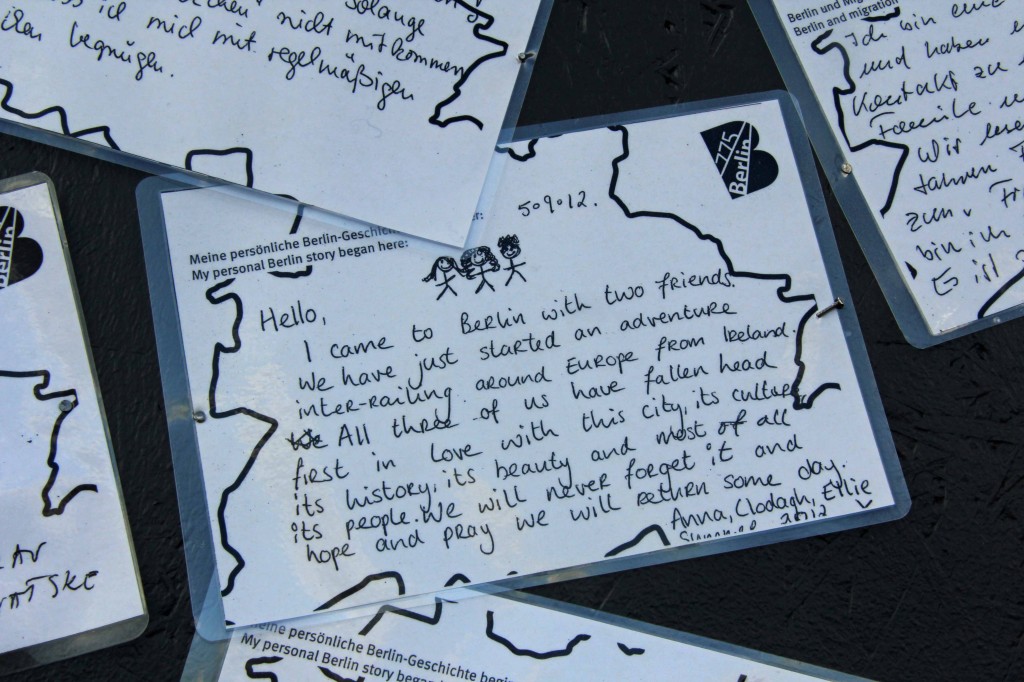 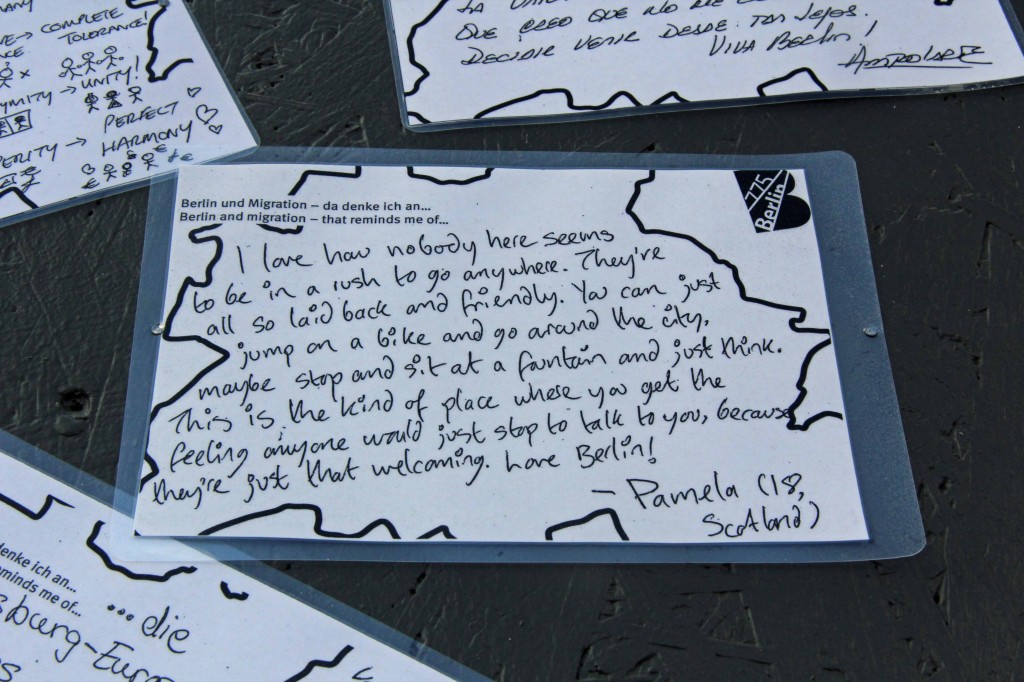 The map is open until the culmination of the city’s 775th Anniversary celebrations on 28 October 2012.

If you’d like to know more about the City of Diversity Map on the Schlossplatz, check out Chiara’s post on the Roomsurfer blog – 775 und Sexy.  And for more examples of the stories pinned to the map, have a look at the Berlin.de website.

Make Love Not War
Berlin From Above: The Sunset From The Fernsehturm

3 Responses to Berlin: City of Diversity – A 1:775 Scale Map on the Schlossplatz