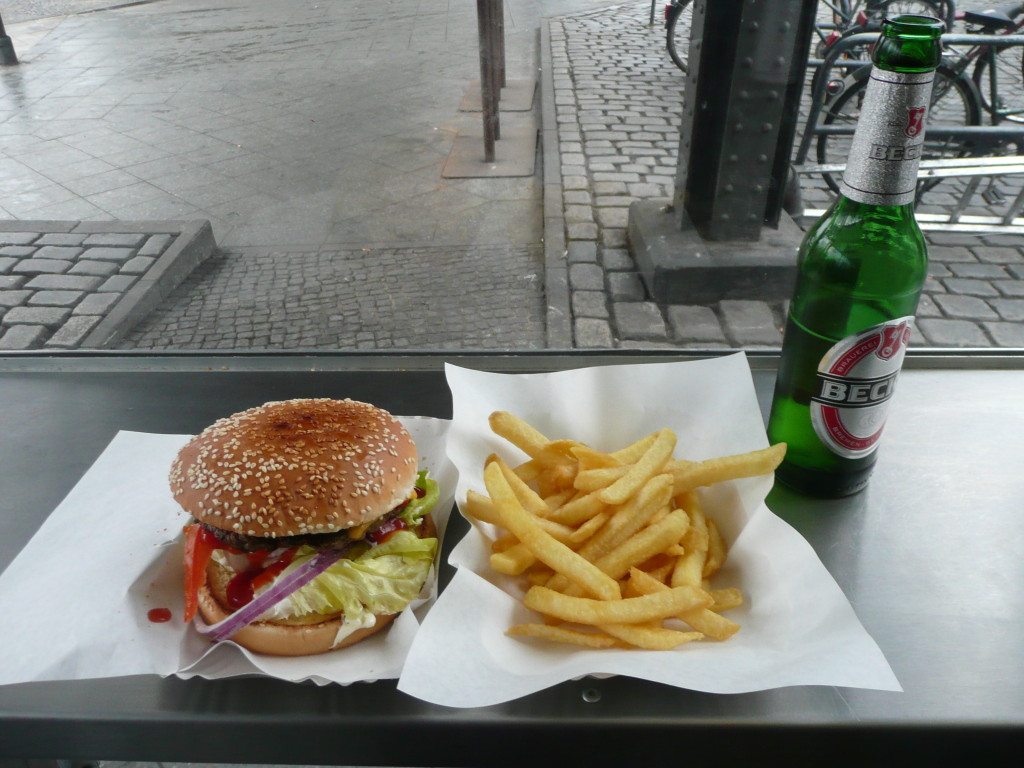 As my travels today took me back near Kreuzberg I decided to pop to Burgermeister for lunch as I had vowed to do in my A couple hours well spent post.

Burgermeister is under the tracks of the U1 near the Schlesiches Tor stop and is a former toilet converted into a kitchen (an interesting choice but probably best not to think about it whilst eating) with a small enclosed area for eating (standing room only).

After paying I was handed a receipt with an order number and found a spot near a heater to wait for my number to appear on the digital display.

As I was waiting to cross Schlesiche Strasse on my way there was a coming together (you couldn’t really call it a crash) between a small car and a lorry.  The female driver of the car seemed less than impressed and the two vehicles caused a long queue of traffic whilst they presumably waited for the police.  Watching these goings on, and listening to a decent selection of music, provided some entertainment whilst I waited for my food.

When my number came up I went to the counter and collected my food and returned to my trusty heater.

I tried the Fries first – in one word disappointing.  They seemed limp, lifeless and unloved.  My first thought on the burger was that it was like a Whopper with a kick but that’s a disservice to the quality of the meat and the fact that the burger was fresh to order. The Chilli in the Chilli Cheeseburger was a Chilli Ketchup rather than the Chilli Con Carne I had been expecting – having checked the menu on the rather funky website there’s nothing to support my expectations.  To my mind a Chilli Cheesburger should be oozing Chilli Con Carne but that’s just me.

I came away wondering if Burgermeister deserves the reputation it has online.  I’ll go again for the Chilli Cheese fries with a Meistaburger and maybe I’ll be in a better position to pass judgement.

The car and lorry were still blocking two lanes of the junction as I left with no sign of the police and I followed the line of traffic and the U1 line along Skalitzer Strasse on the lookout for more street art.