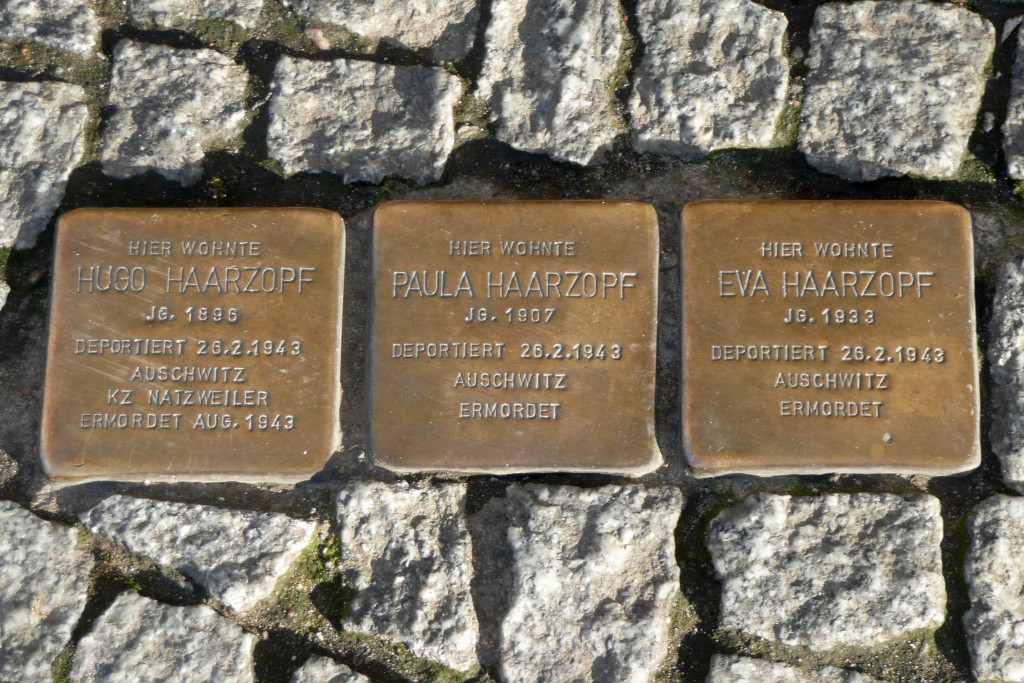 When I left Konnopke’s Imbiss yesterday, I crossed Schonhauser Allee and walked south a short distance to take a picture of these Stolpersteine.  I had walked passed these brass blocks a few times before an article on Slow Travel Berlin drew my attention to their meaning.

Stolpersteine (the English translation is ‘Stumbling Blocks’) is the brainchild of Berlin-born artist, Gunter Demnig and his website describes ‘A project that preserves the memory of the expulsion and extermination of Jews, Gypsies, the politically persecuted, homosexuals, Jehovah’s Witnesses and victims of euthanasia under National Socialism.’

The Stolpersteine are brass cobblestones inscribed with the details (name, year of birth and fate) of a person who lived in the building in front of which they are laid, under the words ‘Hier wohnte’ (Here lived).

From what I can interpret of the timeline on the website the project was conceived in 1993 and the first Stolperstein was laid in Kreuzberg in 1996.  At the time Demnig did not have approval to lay the stone, which was legalized later.

As of January 2014 the cost of a Stolperstein is EUR 120.  The stones are laid by request and it is the requestor who must research the details of the victims.

The proliferation of the stones demonstrates the popularity of the concept and I feel that they are a fitting tribute.  They may be small but somehow that adds to their power to evoke that sensation of what happened where they have been laid.

I plan to take photos of all the Stolpersteine I ‘stumble across’ in Berlin and will post them here.

26 Responses to Stolpersteine – A Memorial Project