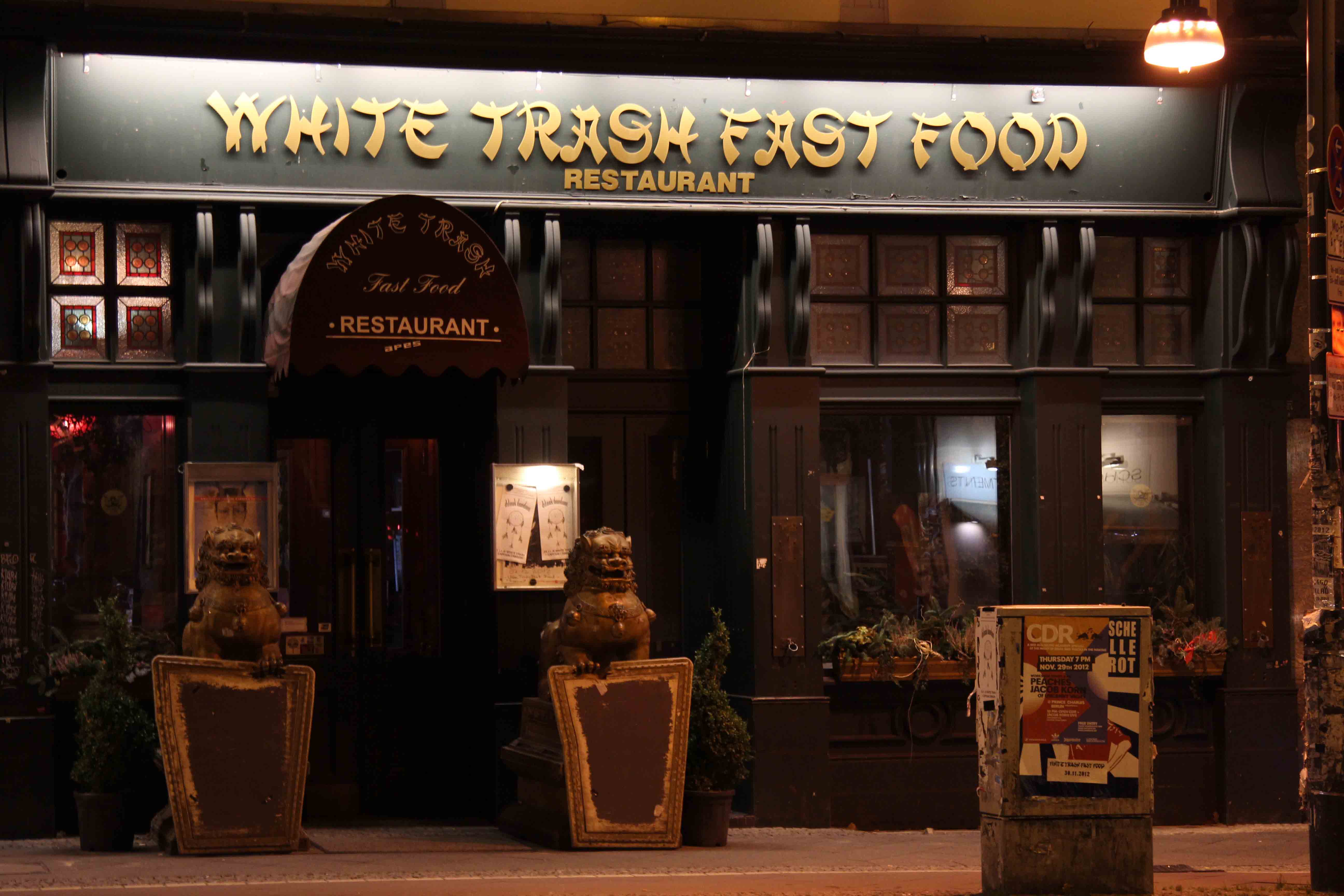 The venue on Schönhauser Allee* is dark and slightly dingy – part restaurant, part bar, part club – and has an eclectic mix of art on the walls, all of which combine to give it a ‘dive bar’ vibe.

Rock n Roll Bingo is currently held on the first and third Wednesday of the month (check the Events listing on the website) and there is a €1 entry charge per person.

As I have done all three of the times I’ve been, I ordered the Extreme chilli-cheese burger, described on the menu as: 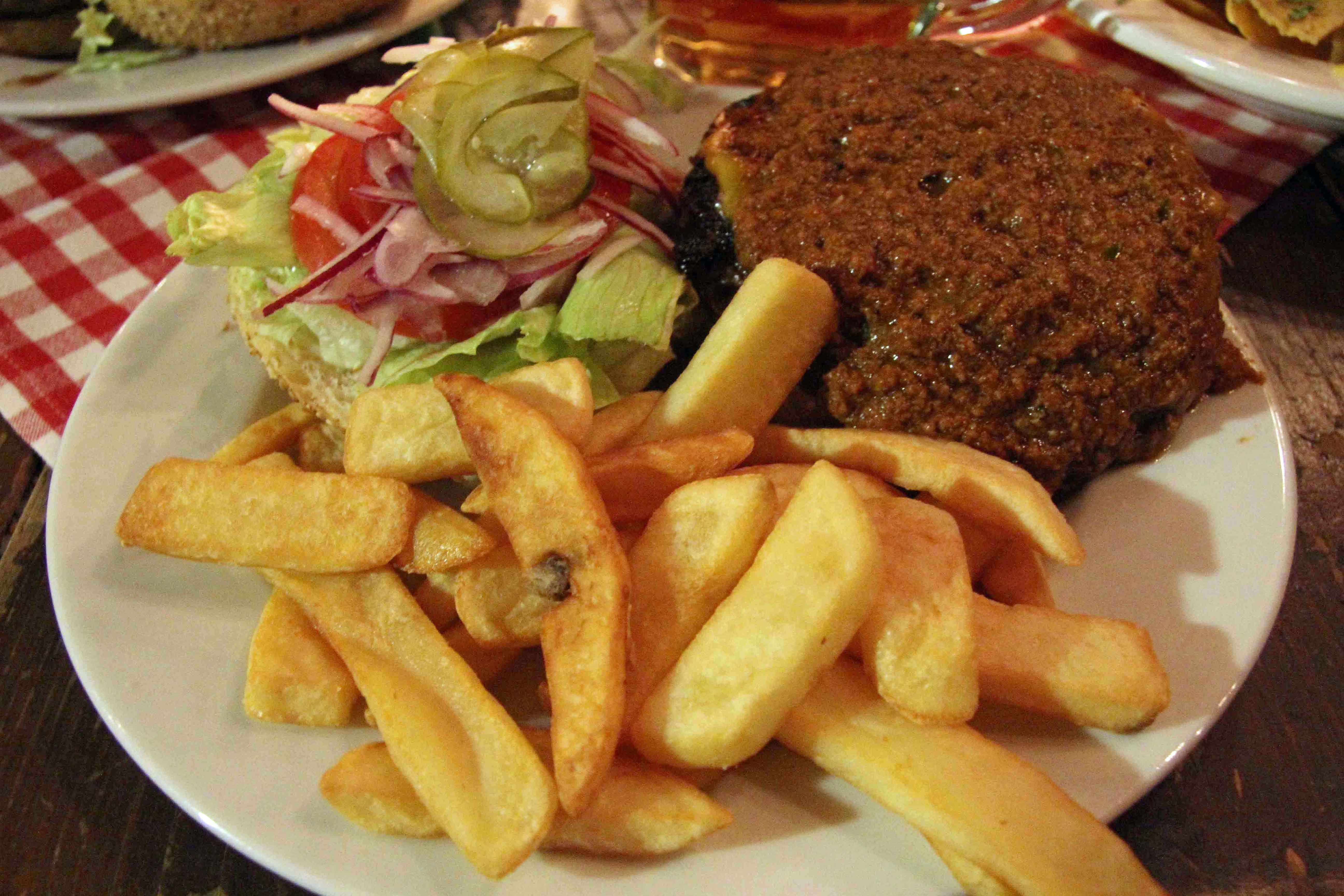 The burger comes loaded with a veritable mountain of chilli and salad so it always ends up messy but that’s not a bad thing.  At €9.50, it’s not cheap but I think it’s a reasonable price for what is a great burger. 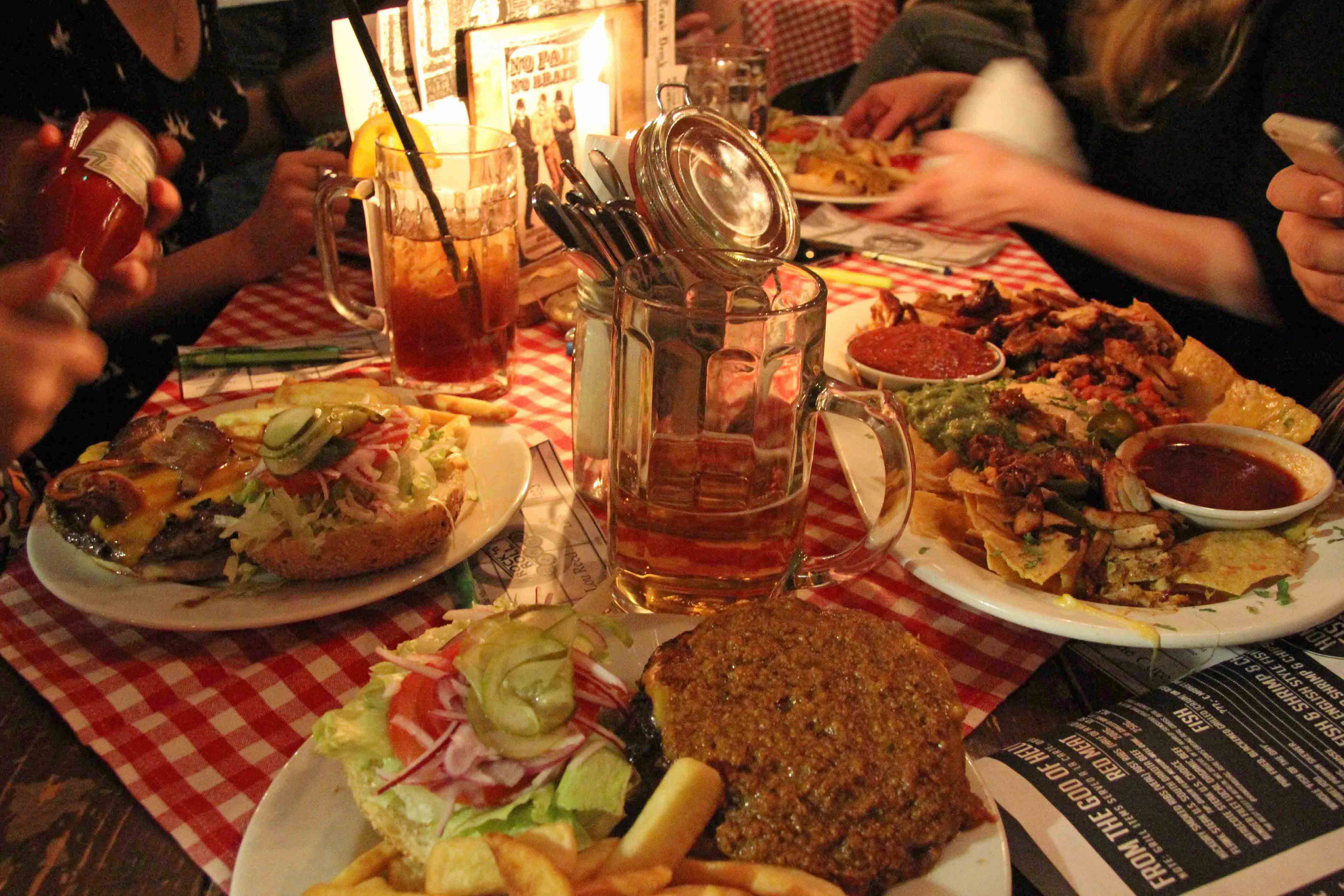 This time, my friend Gilly ordered the Big mucho-macho nachos plate, a combination of:

Chips + melted cheddar/mozzarella + all the fixins

and chose to add chicken.  As you can see on the right of the above picture, it was a mountainous plate of food for €12.  If you’d like to see a close up, click here.

The meal is described as ‘Easily enough for 2’ on the menu but Gilly had a good crack at it. His verdict was that it was OK but all the toppings made the nachos soggy so next time it’s back to the burgers.

Shortly before the first game starts at 21:00, bingo cards and pens are brought to the tables.  Instead of numbers, the bingo card is filled with the name of 10 bands, from the 60s to the present day with a leaning towards indie/rock music.

The proceedings are overseen by bingo caller and MC, James, who is assisted by DJ Suavé and DJ Chianti – the trio hail from England and are bandmates in Big Skies.

The DJs play songs and if the band is on your card you mark it off – simple as that.  For those, a little worried about their music knowledge, there are often clues.

In addition to the bar tabs on offer in the bingo, there are spot prizes on offer for a series of side games.

I managed to bag my first swag in the first, a Name That Tune game, by standing on my chair and correctly identifying ‘Roll With It’ by Oasis.  I got to choose from a selection of CDs and picked the Tribes album (which I have been meaning to buy for a while now).

There was also Air Drumming, Air Guitar and a very impressive Limbo competition. 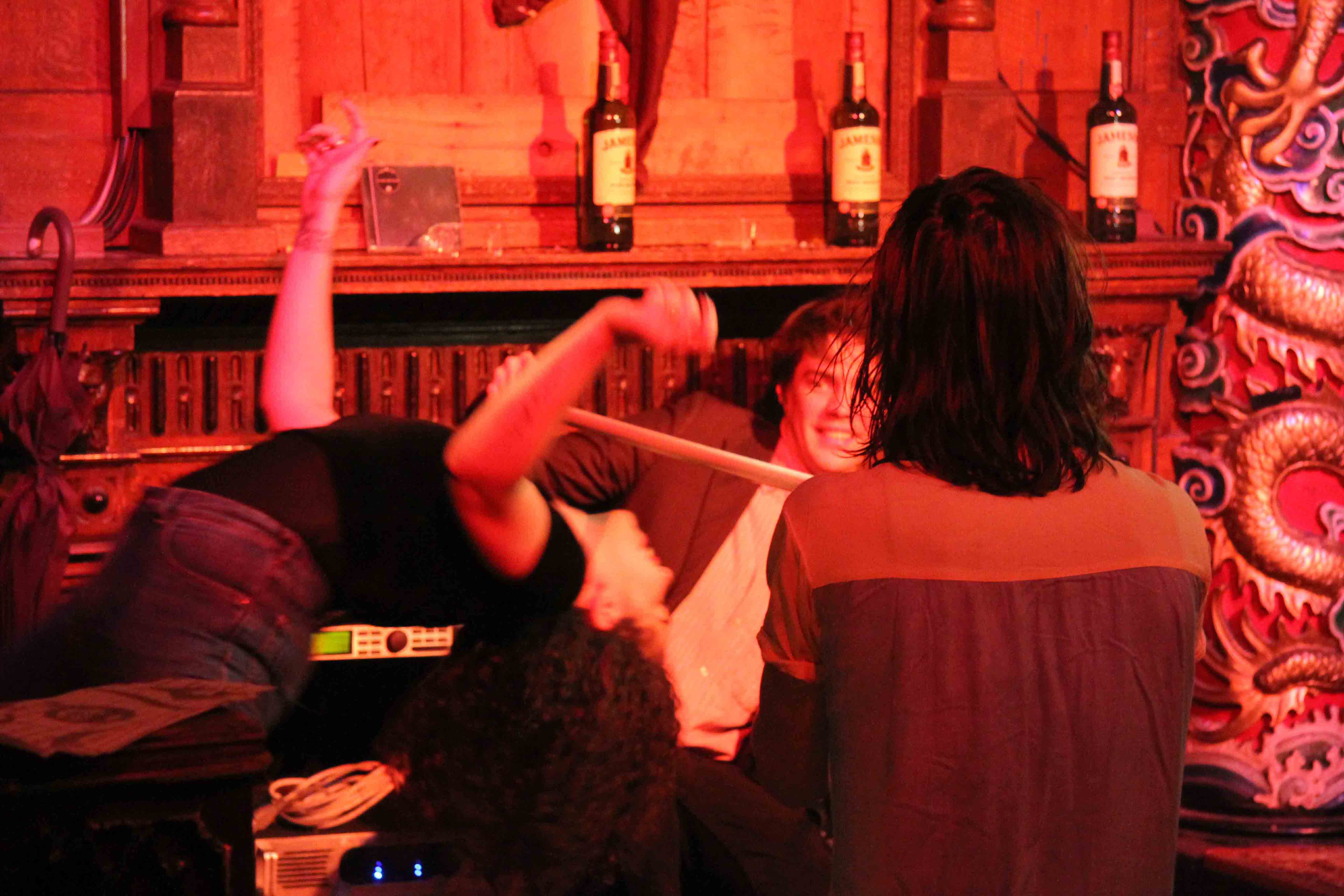 Sparklers (Wunderkerzen) were also handed out to all entrants and when a particular song was played, the best ‘sparkler dance’ won shots of Jameson whiskey for that table. 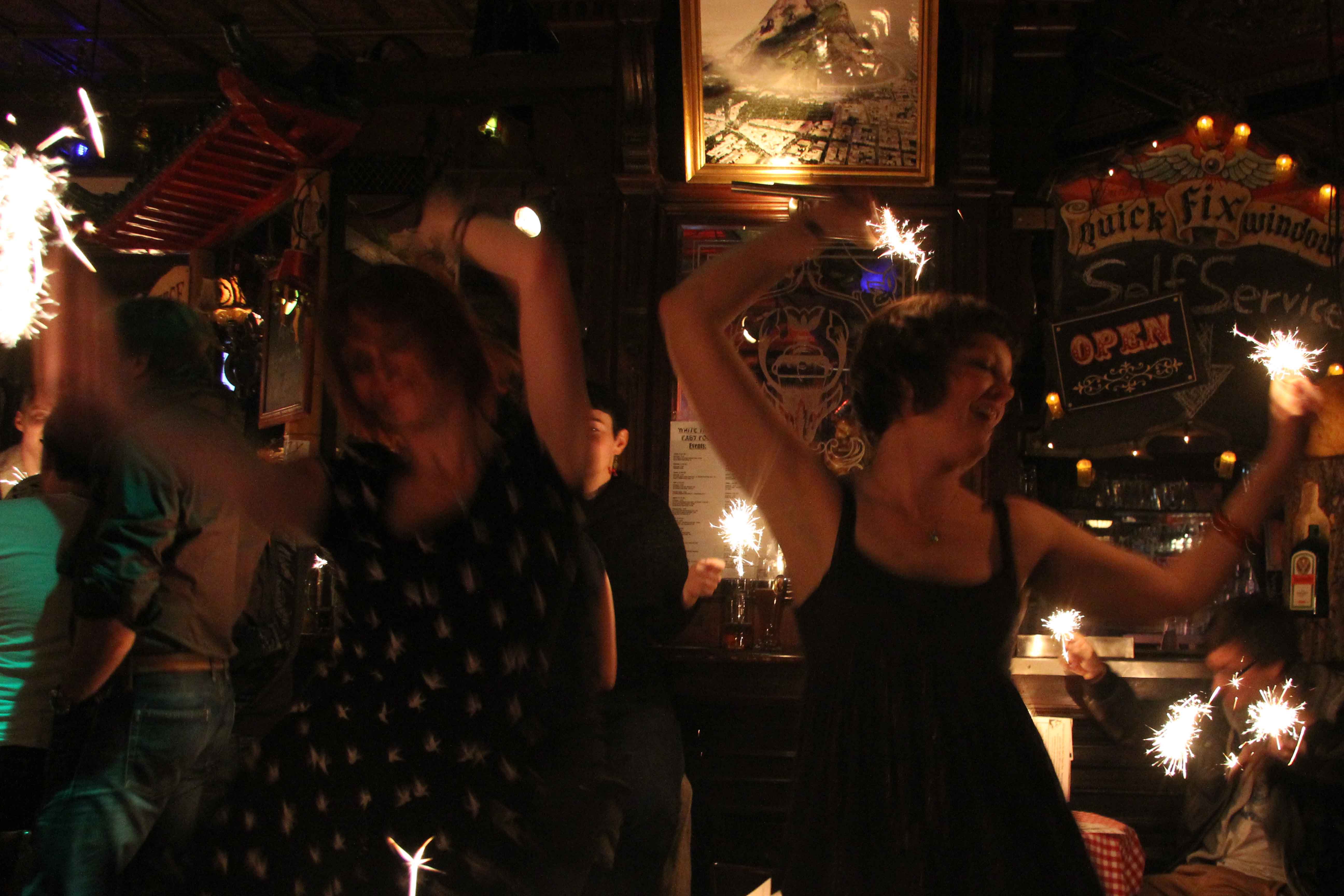 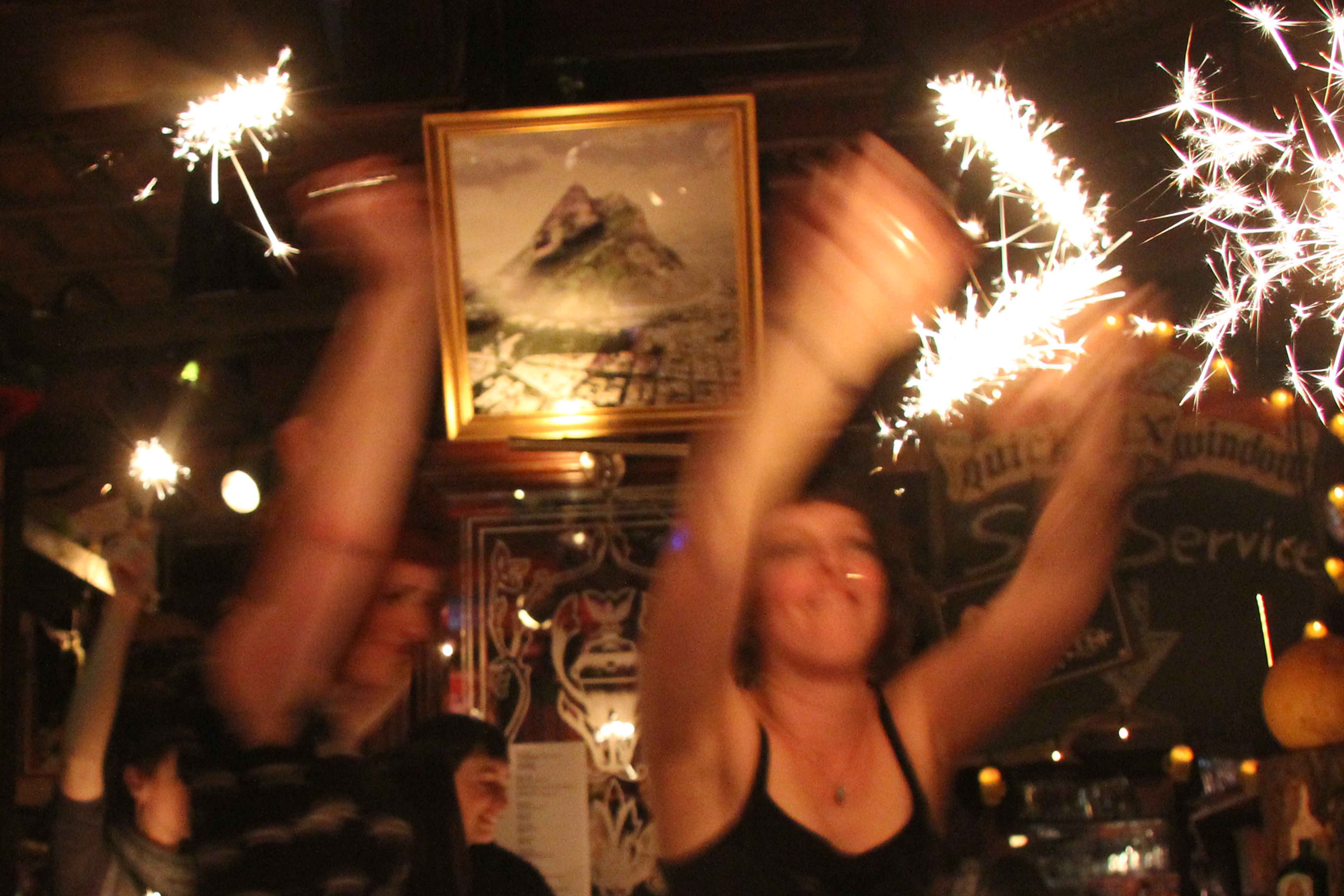 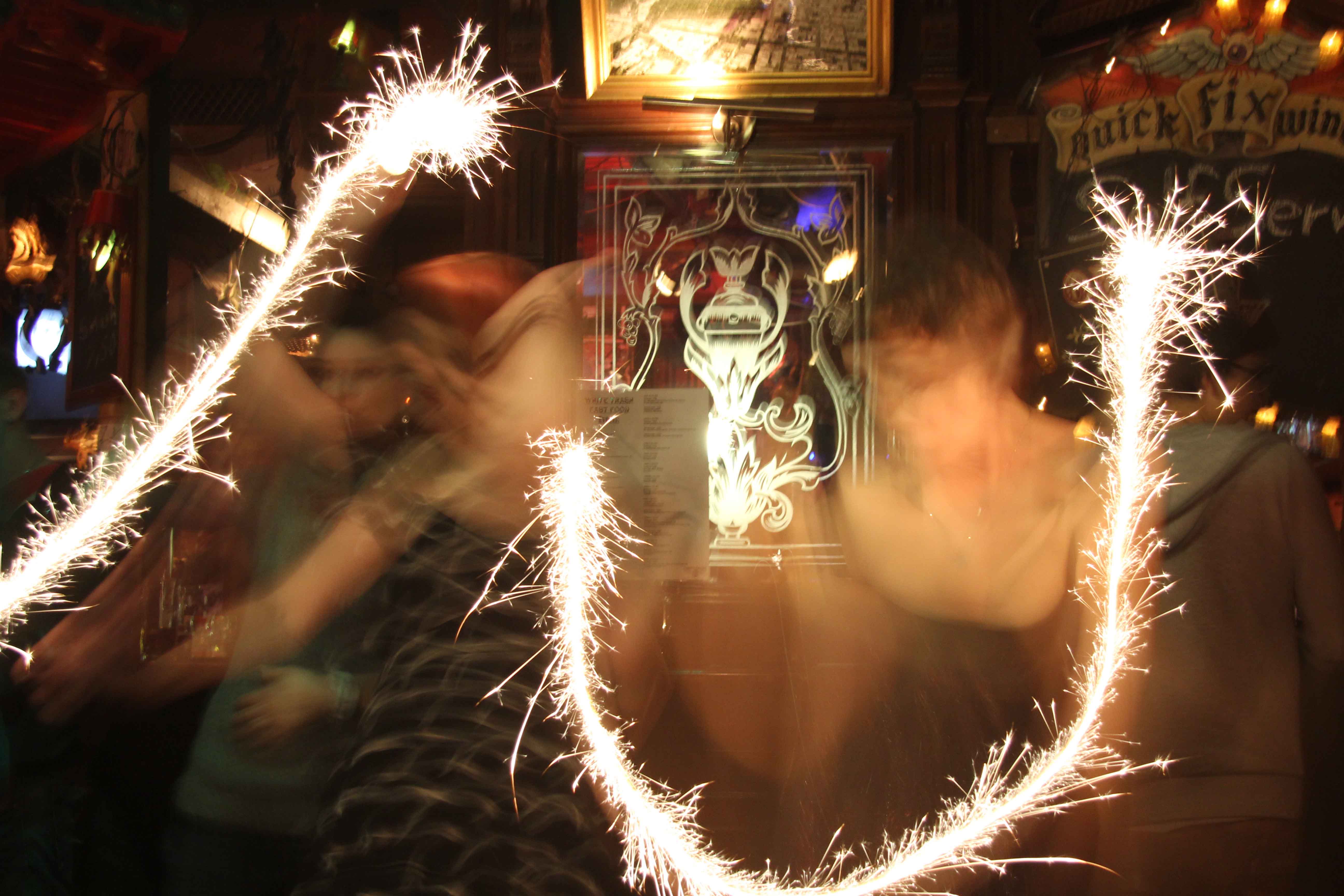 Rock n Roll Bingo at White Trash Fast Food is a great night out with a group of friends.  The burgers are tasty and the games are good fun.

I’ve been three times now and thoroughly enjoyed it every time.  The prizes to be won are just a minor part of the excitement – it is the enthusiasm of the hosts and their injection of humour that makes Rock n Roll Bingo a quality night out.

When the games are over there is an ‘after party’ – on my first visit in the summer we only left when the venue closed and reached home as the morning was starting to get light.

I know I’ll be back at Rock n Roll Bingo at White Trash Fast Food on a Wednesday night soon.  I’m itching to stand up and shout ‘House’.

*Update* – White Trash Fast Food has now moved to a new ‘Nasty-Trash-Zen-Beergarden’ at Am Flutgraben 2 near Arena, Club der Visionäre and Badeschiff on the border between Kreuzberg and Treptow.