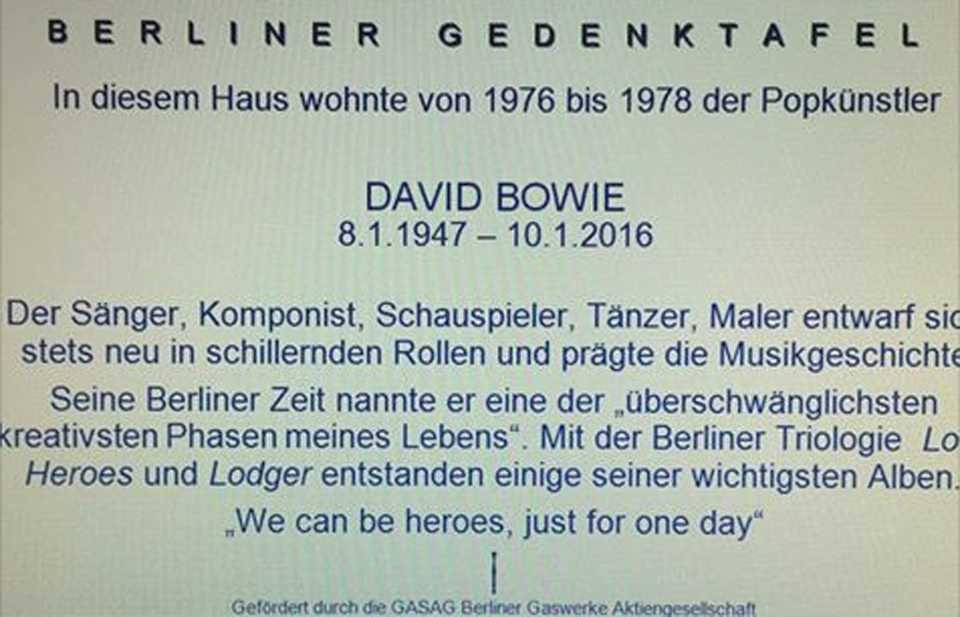 David Bowie, a much beloved adopted son of Berlin, is soon to be honoured by a memorial plaque on the wall of his former home at Hauptstraße 155 in Schöneberg.  On Wednesday evening, Berlin’s State Secretary for Culture, Tim Renner took to Facebook to solicit opinion on the first draft of the text to appear on the plaque.

Bowie lived in the flat in Berlin with Iggy Pop from 1976 to 1978 after moving to the city to escape the hedonistic lifestyle of his time in Los Angeles and to overcome his cocaine addiction.

His death in January 2016 was met with a very public outpouring of grief in the city and the steps at the entrance to his former home and much of the pavement in front of them were covered with a carpet of flowers.

There were calls at the time for the Hauptstraße to be renamed David-Bowie- Straße but a memorial plaque was deemed more appropriate.

Renner posted what appears to be a photo of a computer screen with the mock-up for the memorial plaque with the comment ‘Hmmm, the first draft has reached me.  What amendments have the swarm intelligence? We screw that on Hauptstrasse 155 on 17 or 22 August.’

The text appearing under the dates of Bowie’s life and death can roughly be translated as:

The singer, composer, actor, dancer, painter always reinvented himself in dazzling new roles and shaped the history of music.

He called his time in Berlin “one of the most exuberant creative periods of my life”. The Berlin trilogy of Low, Heroes and Lodger were some of his most important albums.

“We can be heroes, just for one day”

At the time of writing the post has attracted 255 comments, many not too complimentary.  A particularly sore point is the misspelling of the German for trilogy.  There is also a fairly general feeling that the text is emotionless and long-winded.  ‘Wenige wäre mehr!’, less would be more, writes one commenter.

The comment ‘Something like this would be more appropriate!’ is accompanied by an image of the English Heritage blue plaque on the former home of John Lennon.

Given that the David Bowie Memorial Plaque will be screwed to the wall at Haupstrasse 155 in August there is perhaps a little time left to have your say on how he, and his time in Berlin, should be remembered.