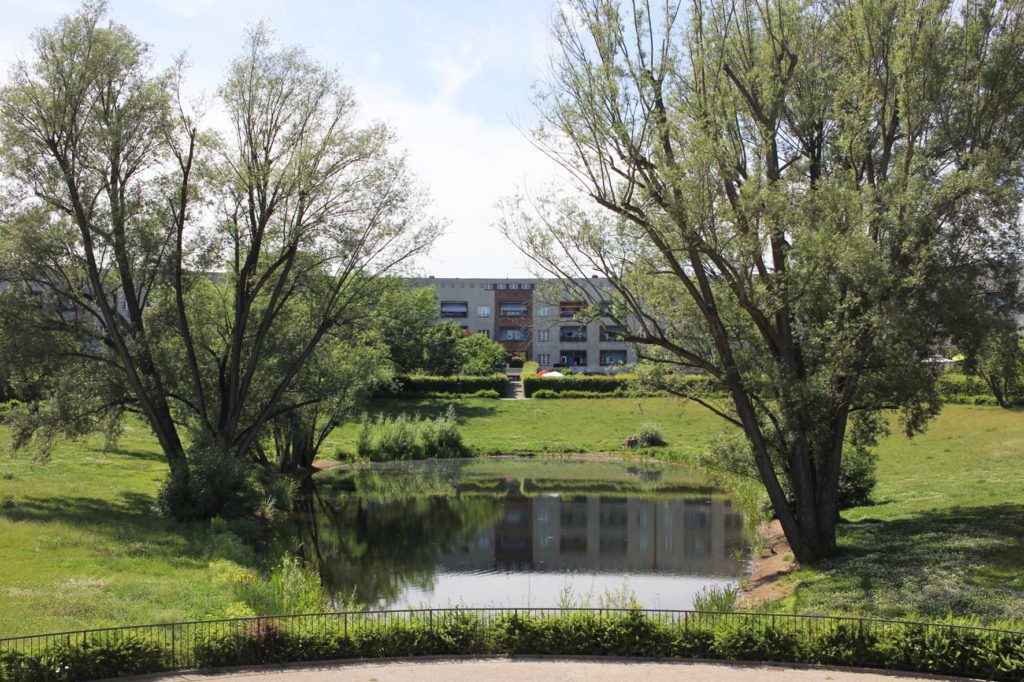 The Hufeisensiedlung (Horseshoe Estate) is a modernist housing estate by architect Bruno Taut built on the site of the former Britz Manor in Berlin. 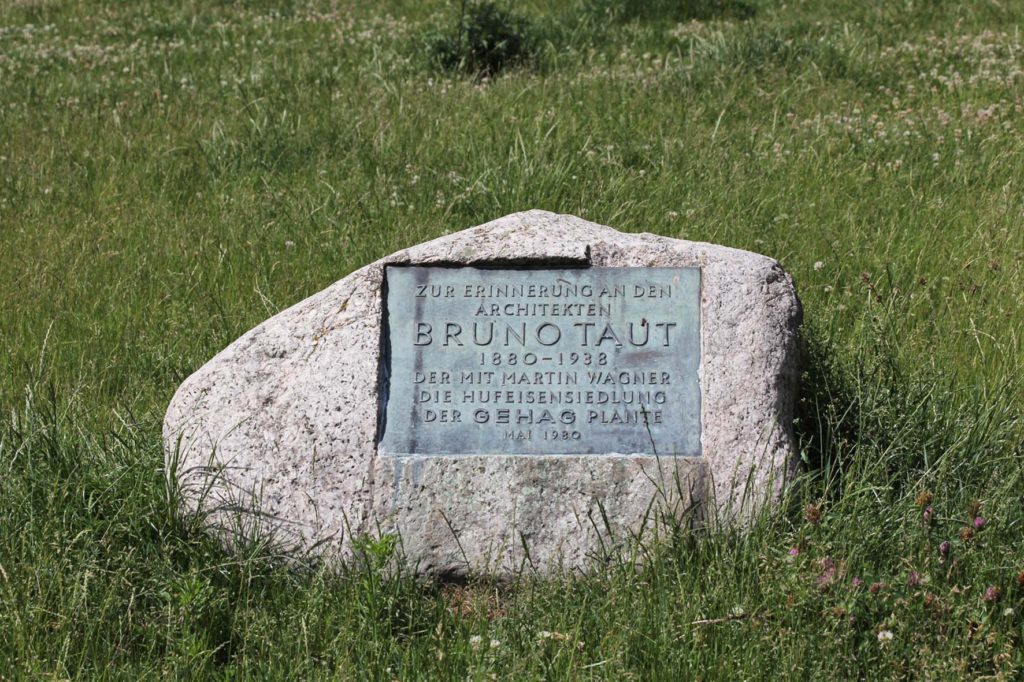 In the late 1920s and early 1930s, architecture in Berlin reflected the political struggle between the Socialists and the Nazis.  Bruno Taut’s plans for the Hufeisensiedlung, drawn up in cooperation with Berlin’s chief city planner Martin Wagner, were in stark contrast to the traditional pitch-roofed houses preferred by the Nazis, that surrounded it.

A similar contrast can be seen in Zehlendorf where Taut’s Onkel-Toms-Hütte estate rubs shoulders with the Nazi-built SS-Kameradschaftssiedlung, now known as Waldsiedlung Krumme Lanke. 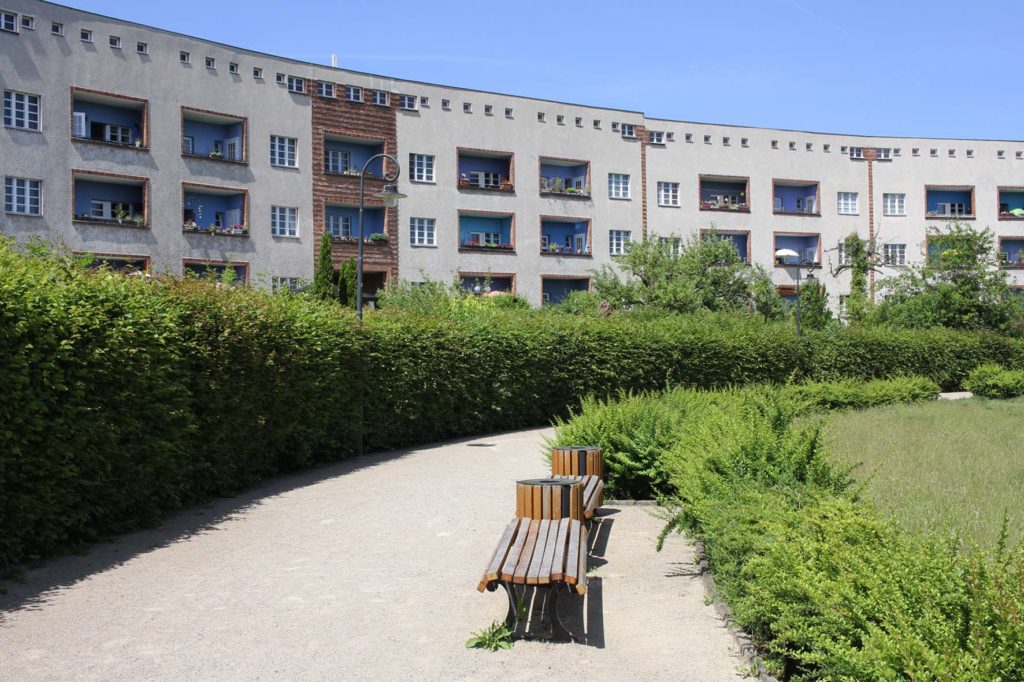 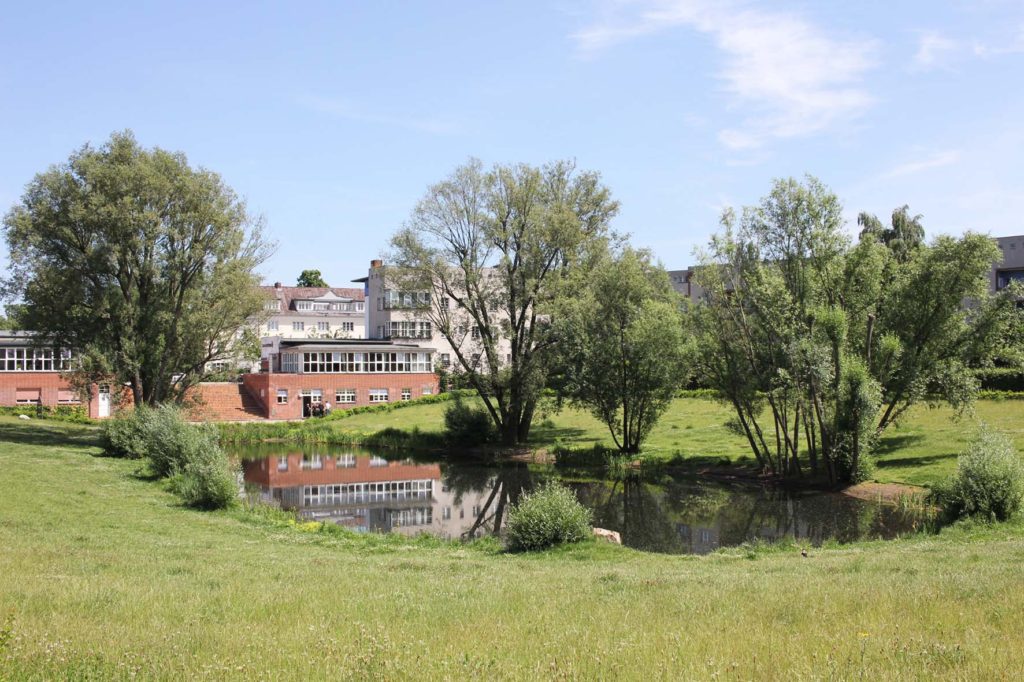 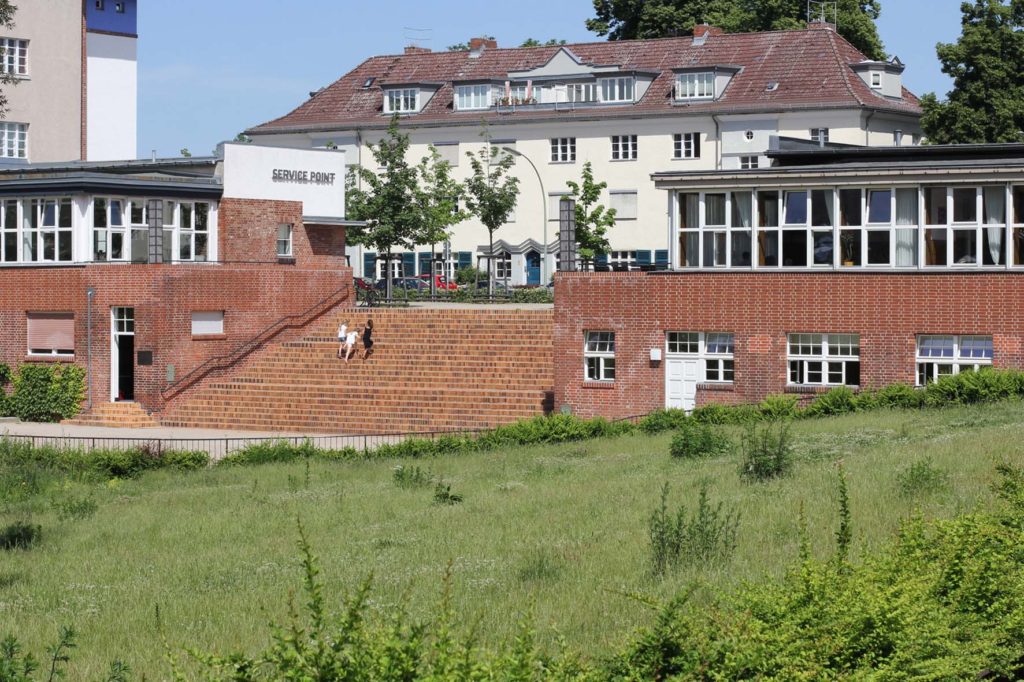 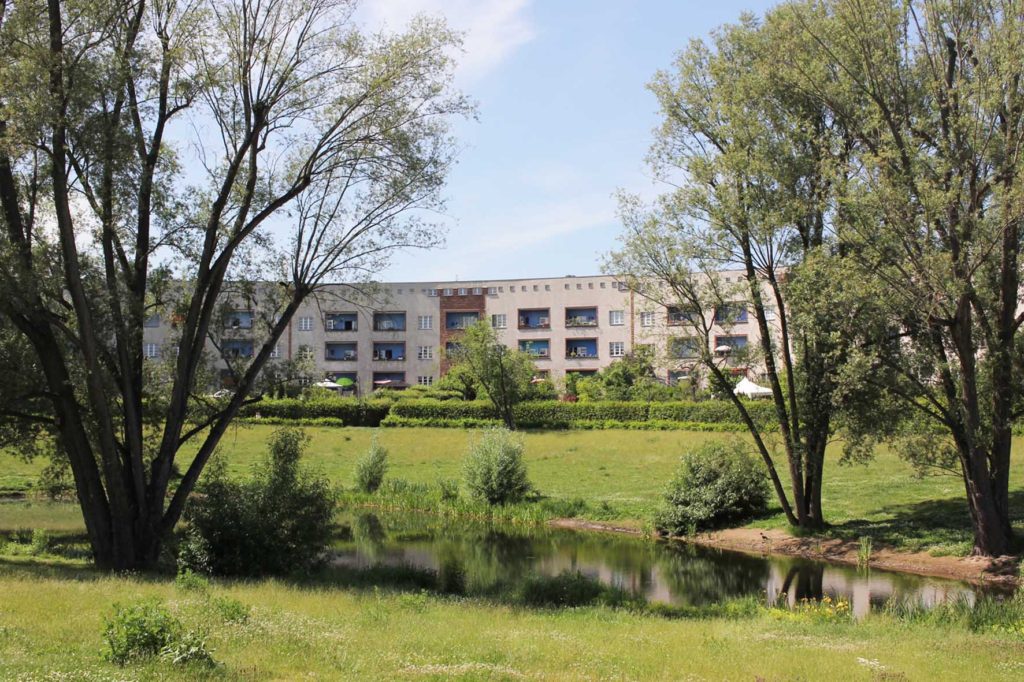 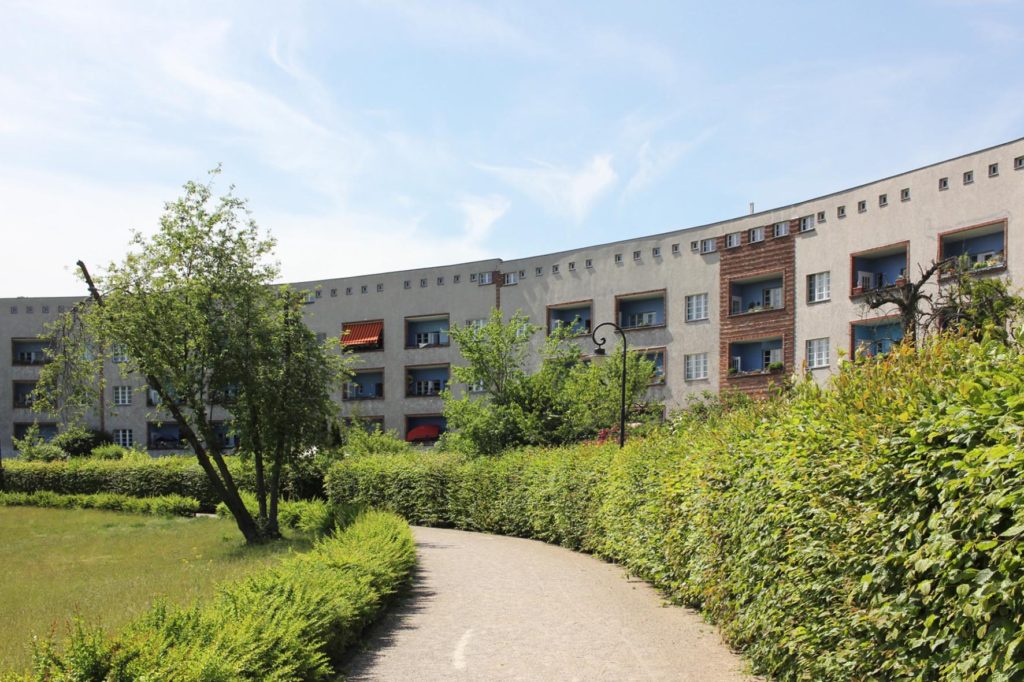 Typical of Taut’s style, the Hufeisensiedlung and surrounding streets boast colourful balconies and doorways, crisp design elements and plenty of green space.  It represents a calmer, prettier side of Neukölln, often described in articles about gentrification as Berlin’s gritty nightlife district.

The horseshoe of flats is arranged around a central garden, complete with pond, and a gravelled path that allows visitors to admire the views from every angle.

As I was standing on the steps near the zum Hufeisen Kneipe on the open end of the horseshoe, an older gentleman approached me.

“You see there, through the opening in front of you, there is a road.  We call that Hüsung (a Low German word for house or home)”, he said.  He then described the way the streets fan out from the horseshoe in the centre and proceeded to name them.  “I was the Hausmeister (caretaker) for all those streets”, he told me proudly.  And then off he went saying hello to acquaintances at the Kneipe as he walked past.

There is an Info Station in a row of shops on the outer side of the horseshoe on Fritz-Reuter-Allee run by Deutsche Wohnen AG, with a café and an exhibition, where ‘visitors can experience Taut’s original colour concept’.

Bruno Taut enthusiasts looking for a more immersive experience can stay at the Tautes Heim ‘rentable museum’, which is ‘completely restored, coloured and furnished in the style of the 1920s and shows a great passion for vintage interior design and historic details.’

Prices start from 150€ per night (a minimum of 3 nights and a cleaning charge mean that the cheapest stay is 500€ for 3 nights for 2 people in midweek).

If your budget doesn’t stretch that far, wandering around the Hufeisensiedlung, admiring the architecture costs nothing. 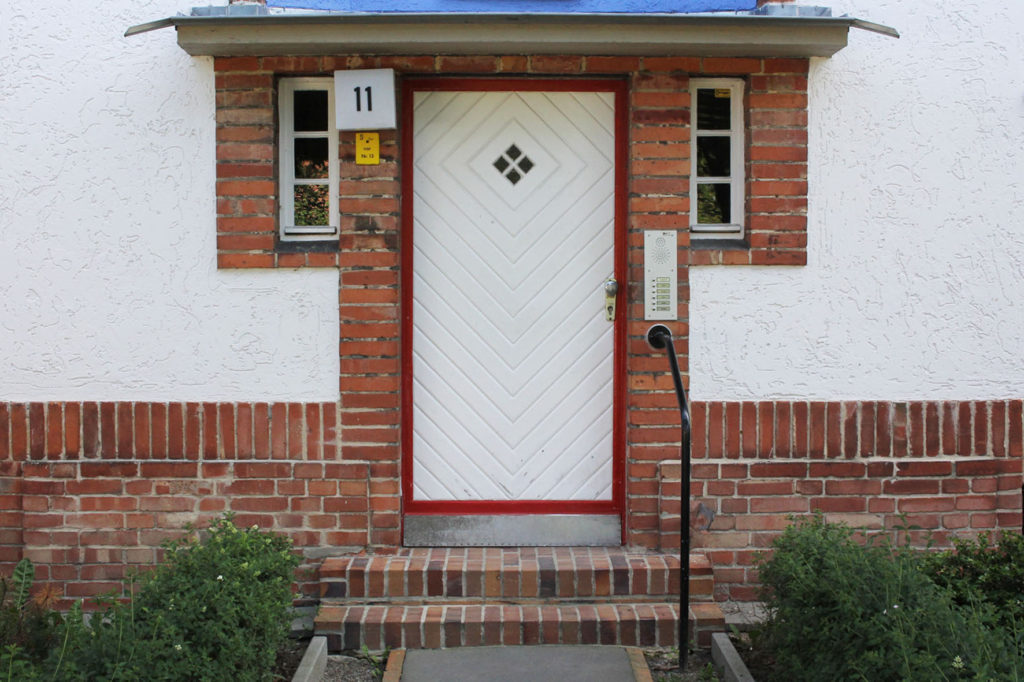 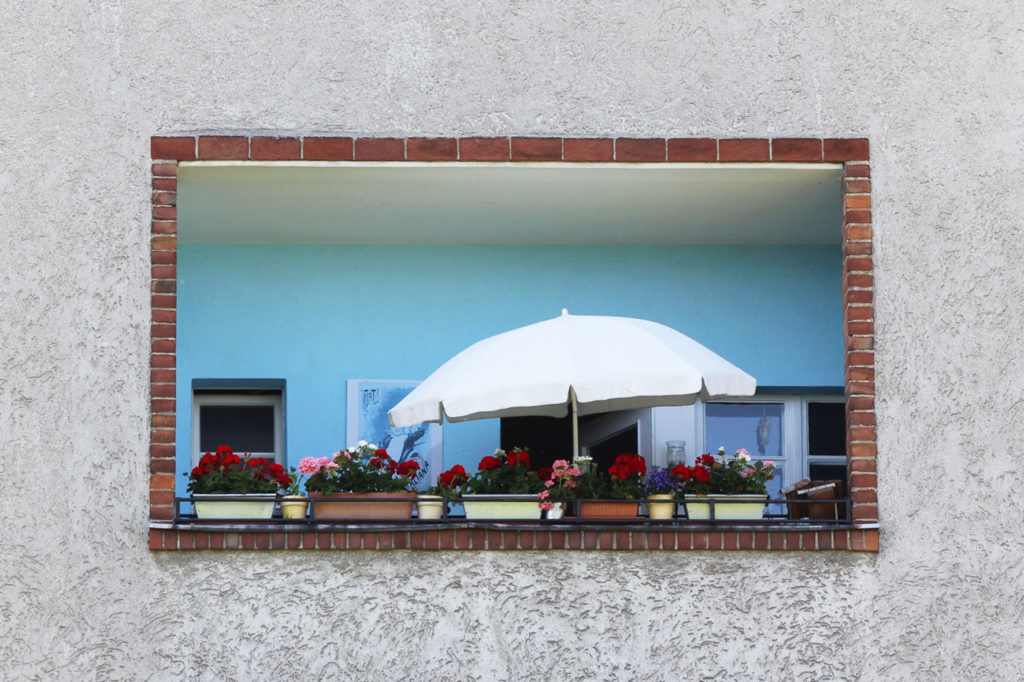 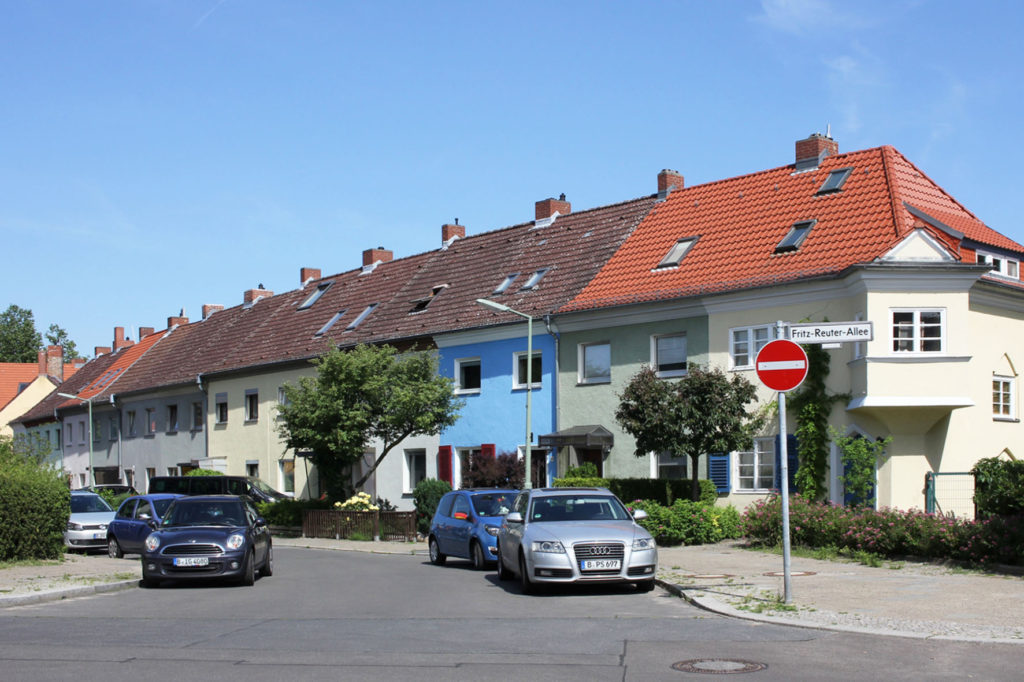 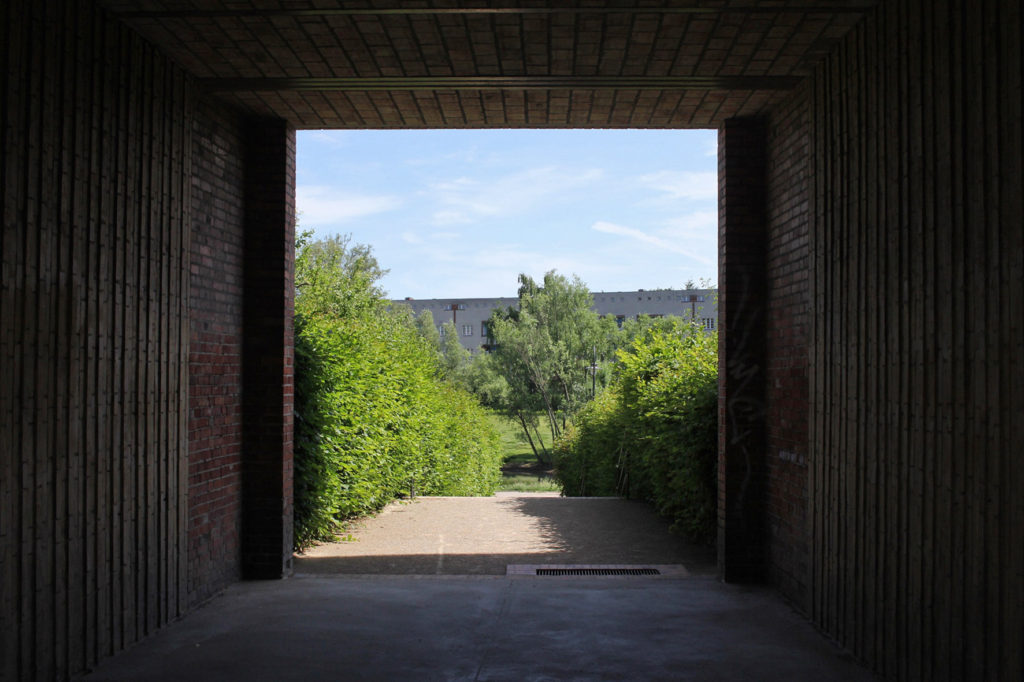 If you are visiting for the first time, I would recommend approaching Bruno Taut’s Hufeisensiedlung from Fritz-Reuter-Allee, reachable either from U-Blaschkoallee or U-Parchimer Allee – this will afford you the most impressive first impression down the sweeping steps at the open end of the horseshoe estate, across the garden and pond.