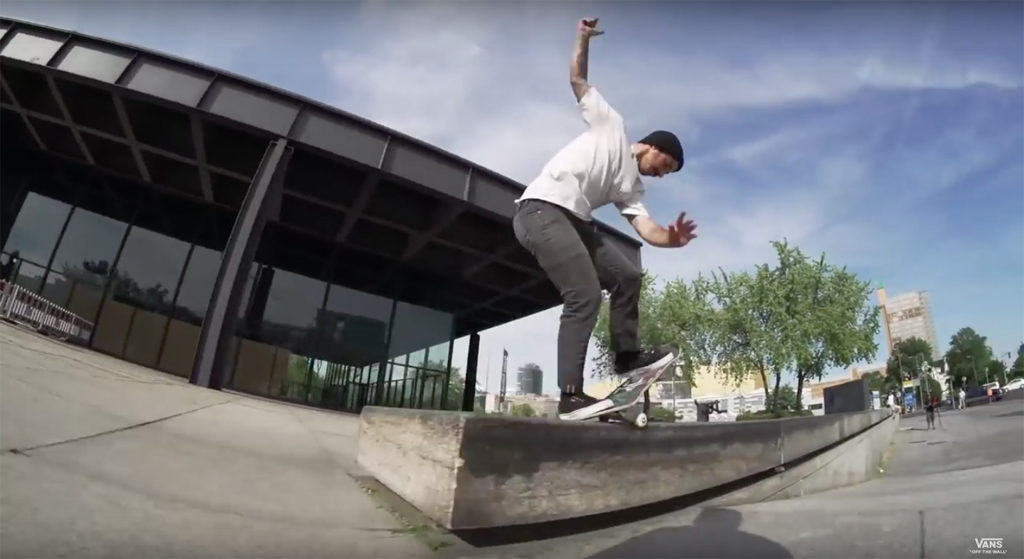 The Vans Mexico Skate Team was in Berlin in 2014 at the end of a European tour: Max Barrera, Antonio Díaz, Hugo Zurita and Christian Huerta carve up the city in Mexico Skate Team takes the City of Berlin | Skate | VANS.

They tick off the most famous skate spots in Berlin, hitting up the benches on Warschauer Strasse, Park am Gleisdreieck, the Neue Nationalgalerie and Volkspark Friedrichshain and throw in a visit to the Soviet Memorial in Treptower Park for good measure.

If you liked what you saw in that short video, I recommend, Mexico Team Skate Tour in Berlin | Skate | VANS‬, a 14-minute extended version with behind the scenes footage and interviews.

The skaters were clearly impressed with Berlin and surprised by the difference in the attitude of the police compared to back home.

They weren’t so impressed by the weather though.

As well as all the outdoor spots mentioned above the team also pop into Betonhausen at Skatehalle Berlin.

There’s a great moment when skating near Potsdamer Platz, Antonio Diaz narrowly avoids shooting off the kerb into the street in front of a Ferrari and says:

I almost got run over by I don’t know how millions of Pesos.