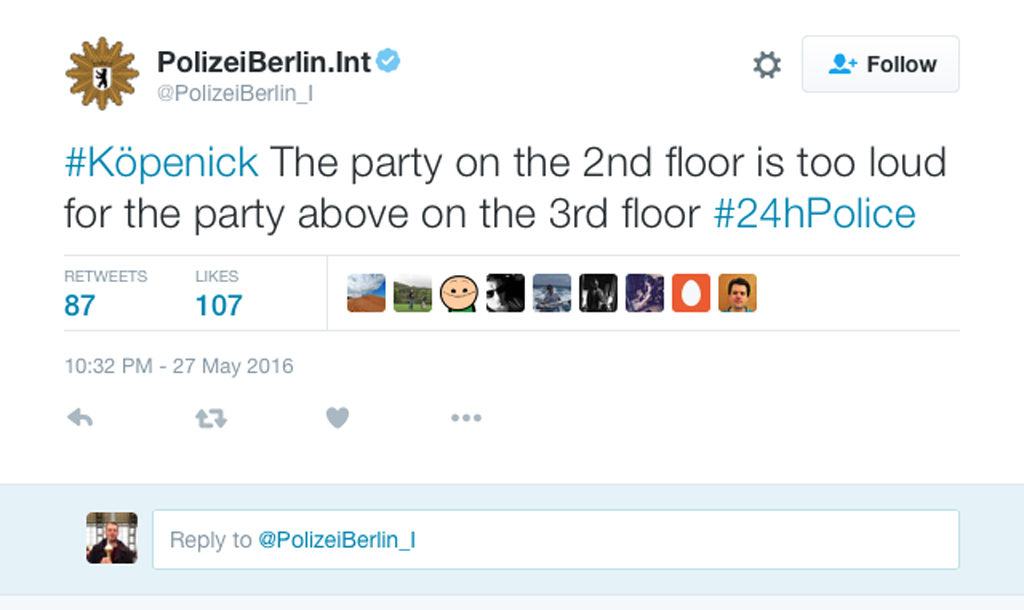 Last weekend was the Berlin Police Twitter Marathon 2016 – for 24 hours the police live tweeted the situations that they were called to in German and English, starting Friday evening, with hilarious consequences.

In a city where ACAB graffiti is scrawled across countless walls, this was as much about generating some good PR as keeping the public informed and plenty of the tweets showed that the Berlin Police have a sense of humour.

The tweet in the title image was my all time favourite for it’s ultimate ‘Dit is Berlin’ (that’s Berlin) sentiment.

And this wasn’t the only noise complaint by a long shot.

12 complaints about noise in the last 10 minutes. Say it like it is: Berlin is loud” #24hPolice

As you would expect, there were plenty of thieves out there.

#Marzahn_Hellersdorf 3 kids tampering with a lorry. Has someone misunderstood the concept of car sharing #24hPolice

But not everyone was after the usual wallets, watches and other valuables

Stolen food in #Friedrichshain Woman being a nuisance in a restaurant. Takes pizza from guests’ plates and won’t leave #24hPolice

It being the weekend, there were plenty of people who had a bit too much to drink with the usual consequences: nudity, fighting and vandalism.

Guy strips in front of a bar and goes crazy. We’re on the way to help him dress #24hPolizei

5 persons having fisticuffs outside a pub in #Steglitz #24hPolice

#Xberg targetted return of bottle deposit. Bottle thrown into a bar. Our colleagues are paying a visit #24hPolice https://t.co/BpfdScdGQP

A fair few people were ‘caught short’, including some prostitutes on the Kurfürstenstraße.

Ladies of the night on #Kurfüerstenstraße are using a garden as a toilet. How dare they #24hPolice

And in a bizarre twist, someone needed help getting out of a graveyard.  Presumably not a long-term resident.

Arisen: Person wishes to leave a graveyard in #Mitte. The gate is unfortunately locked We can help #24hPolice

It wasn’t all fun and games though.  Unbelievably, in a day and age when we’re all aware of the potential personal consequences of such actions and only the most idiotic could not be aware of how it could affect others, there are still people who call the emergency number and waste the police’s time.

Caller dialled emergency number to wish us a happy weekend. Thanks but no thanks on this number #24hPolice https://t.co/Frd7fS8k22

This is the third Berlin Police Twitter Marathon and I would recommend following @PolizeiBerlin_I (English) or @PolizeiBerlin_E (German) in preparation for the next 24 hours in the life of the Berliner Polizei and the inevitable new collection of amusing tweets.