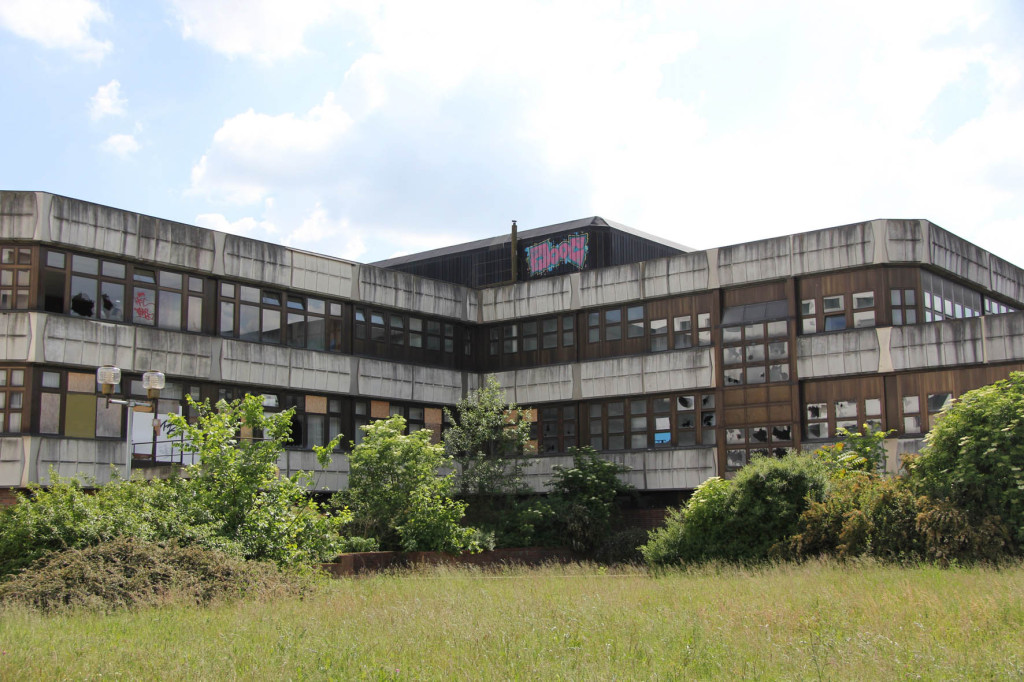 It’s been a while since any important meetings were held at the abandoned Kongresszentrum des Sportforums Berlin (the Conference Centre of the Berlin Sport Forum) in Hohenschönhausen and they’re no longer taking bookings at the attached Sporthotel.  Mind you, no one in their right mind would want to stay there – between the smashed windows, detached fire escape and bricked up doors, it’s no longer hospitable or safe. 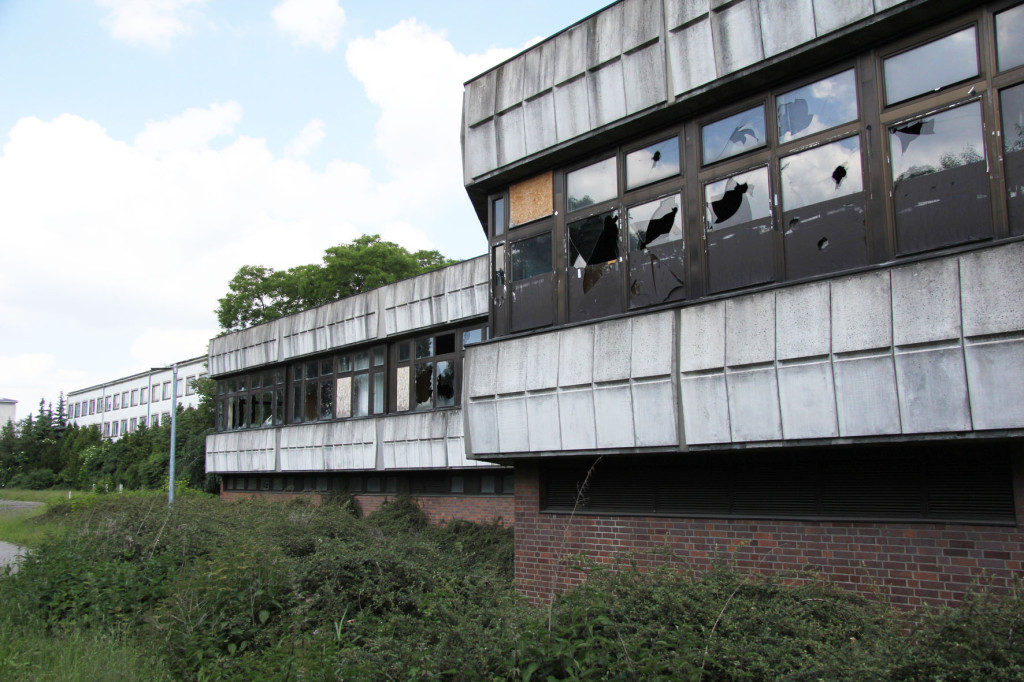 The Kongresszentrum and Sporthotel were built to complement the Sportforum Berlin (or Sportforum Hohenschönhausen), which was established in the 1950s as a centre for sporting excellence.

The Sportforum, which is still operational, is the second largest sports complex in Berlin after the Olympiapark and the 35 sports facilities here are used for training elite athletes as well as for recreational sport.

The complex was also previously known as the Dynamo-Sportforum as it was home to SC Dynamo Berlin, the sports club of the Ministry of Police and the Ministry for State Security (the Stasi).

It was here that BFC Dynamo played their home games from 1961 to 1971 and have done again since 1992.  It is said that Erich Mielke, head of the Stasi, was so determined to establish BFC Dynamo as the most successful team in East German football that the players of the then leading team, Dynamo Dresden, were forced to relocate to Berlin in 1954. 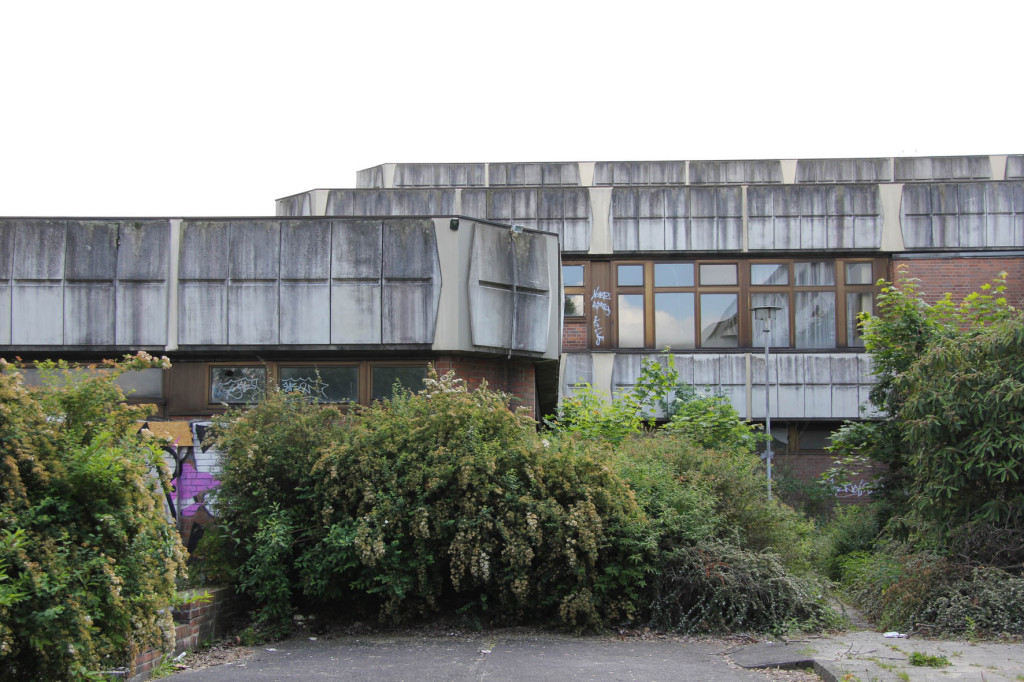 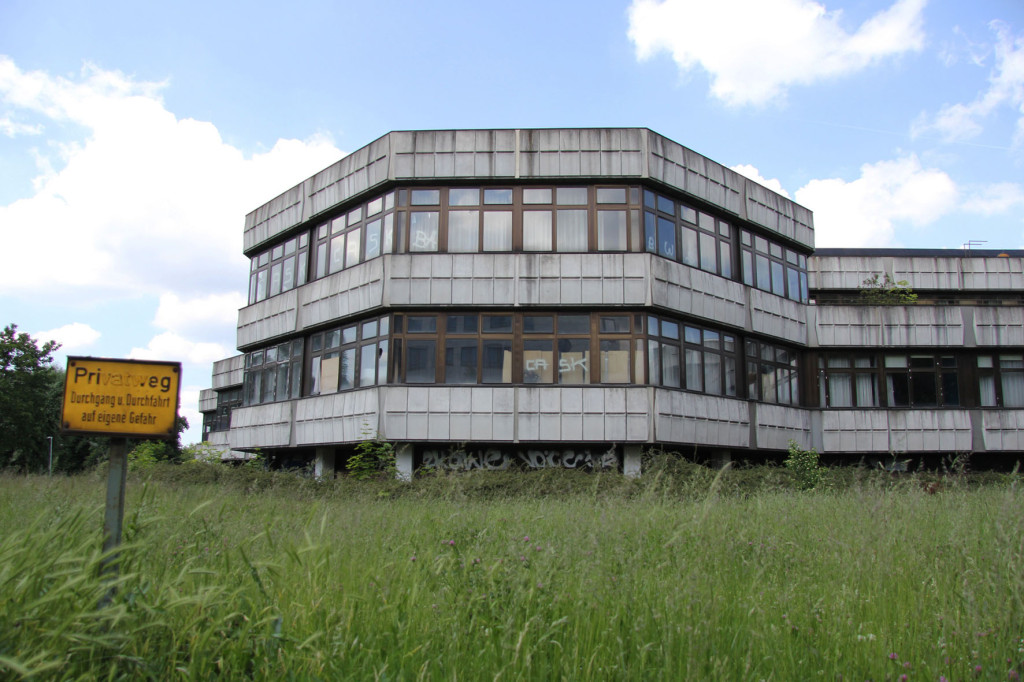 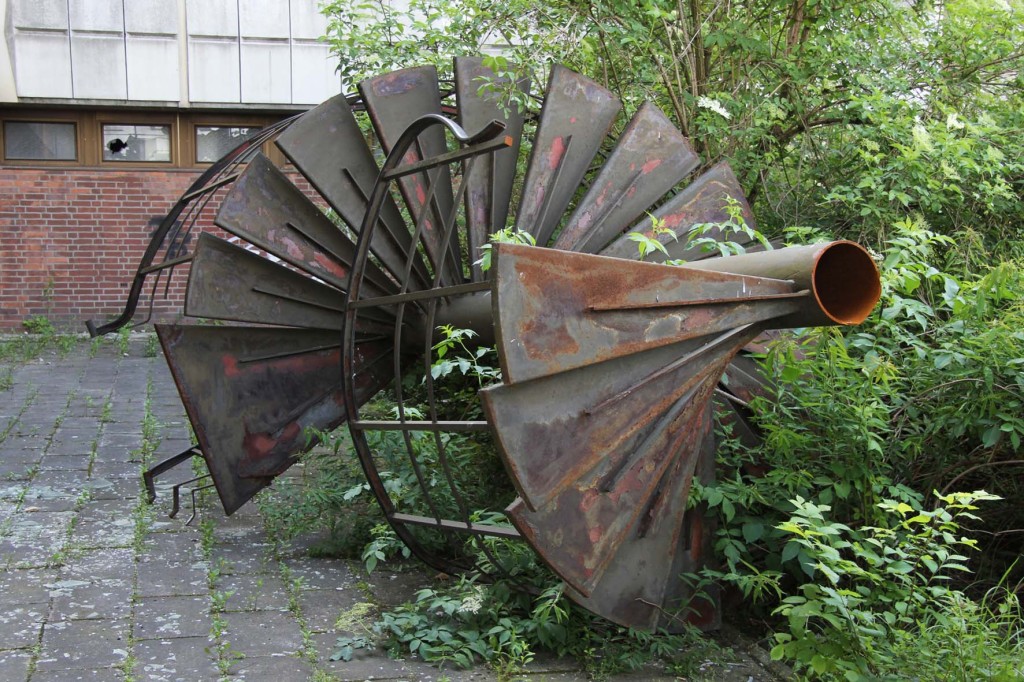 In 1998, the Sportforum was handed over to Berlin by the TLG (Treuhand Liegenschaftsgesellschaft), a successor to the Treuhandanstalt and responsible for the privatisation of former state owned companies of the East German government after reunification.

The Kongresszentrum got added to my list of places to explore when I spotted it from the window of a tram as I went home one evening.

Having checked it out online I set out one afternoon in June 2013 and at first I thought I was going to be thwarted in my attempts to get a look inside.

It was clear that someone had gone to some effort to secure the building – a number of the entrances had been bricked up, other doors and numerous windows on the lower floors had hardboard screwed to their frames.

On this occasion though, my perseverance paid off.  Just when I thought I had exhausted all options, I spotted a panel that had been unscrewed.  I moved the panel carefully to one side and even more carefully, crawled through the broken window making sure to avoid the jagged edges of the remaining glass shards. 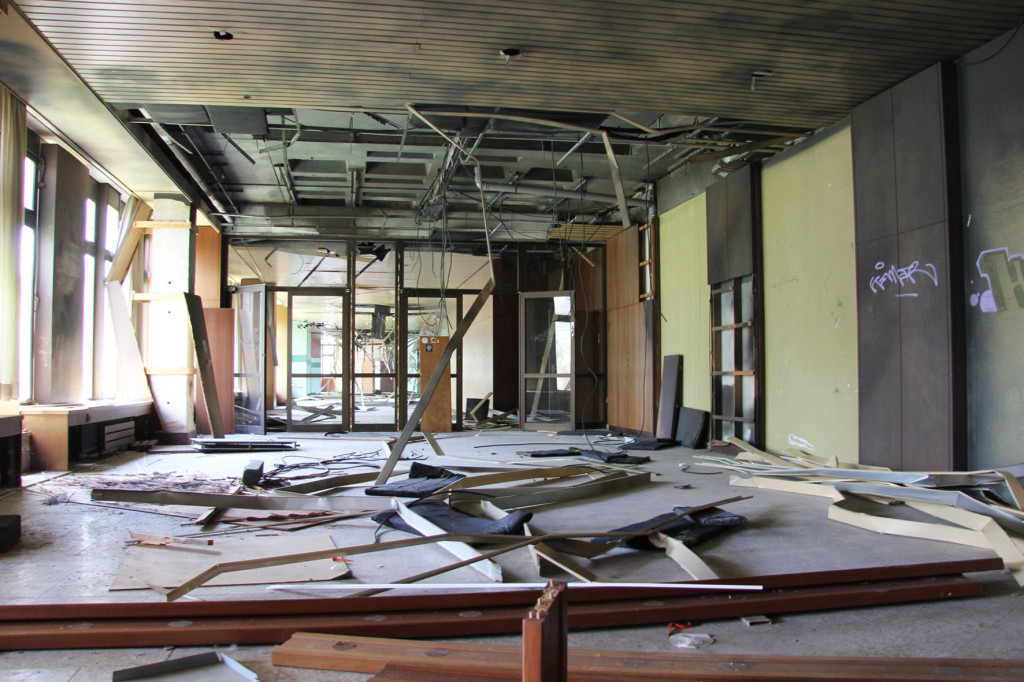 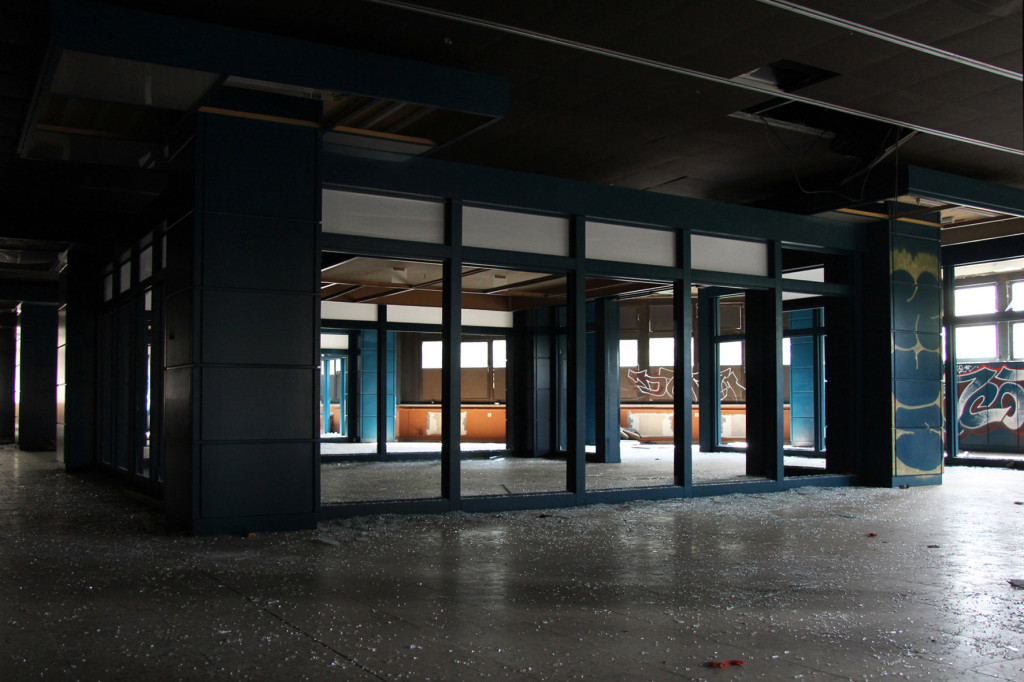 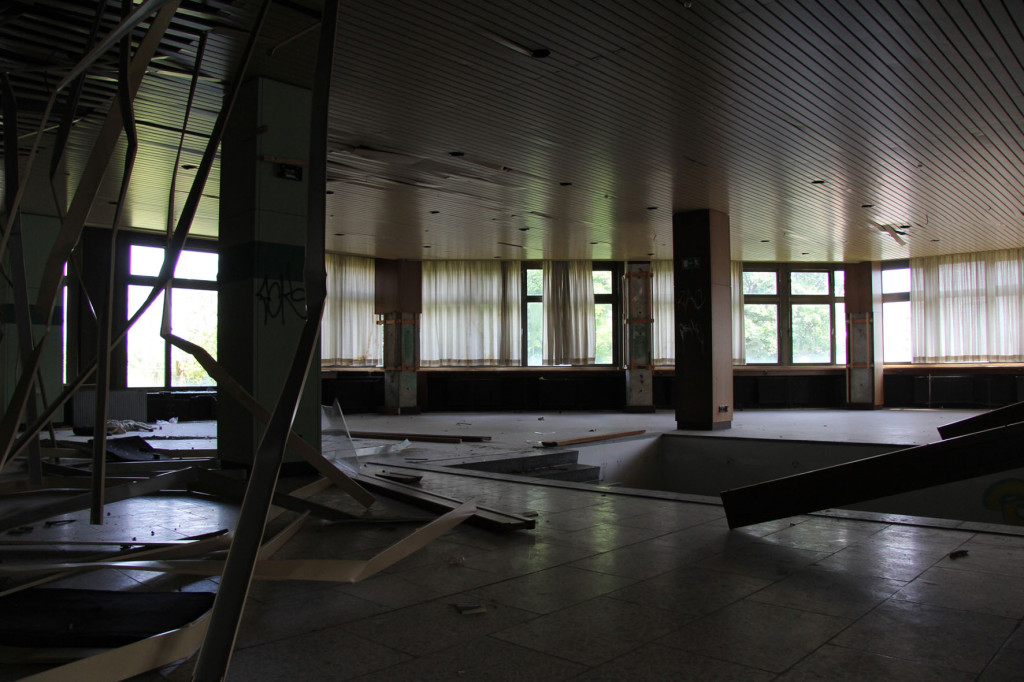 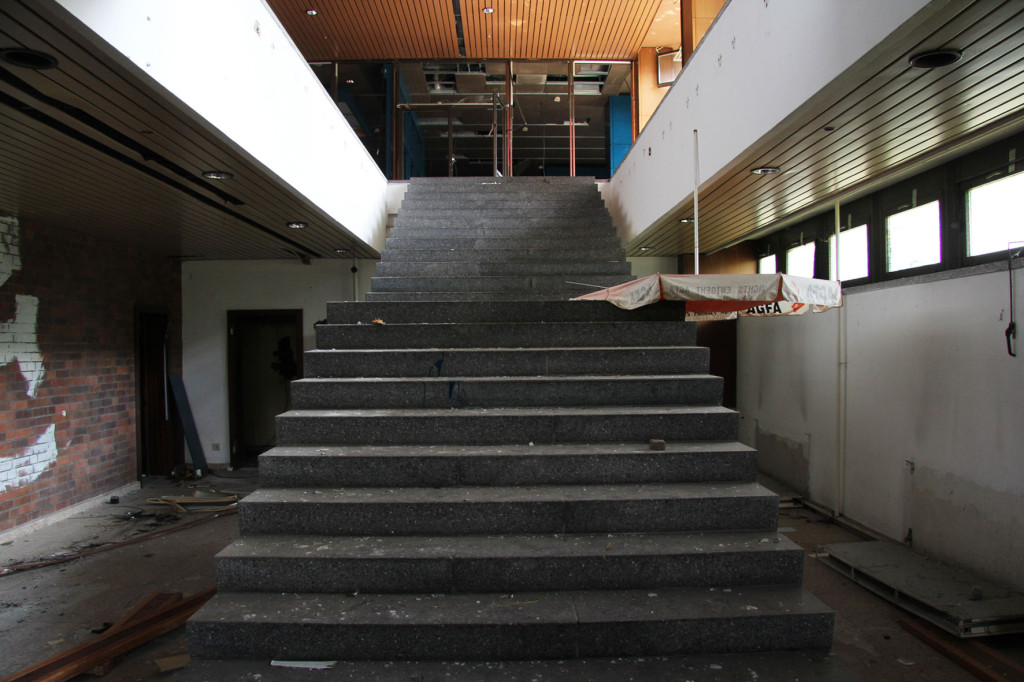 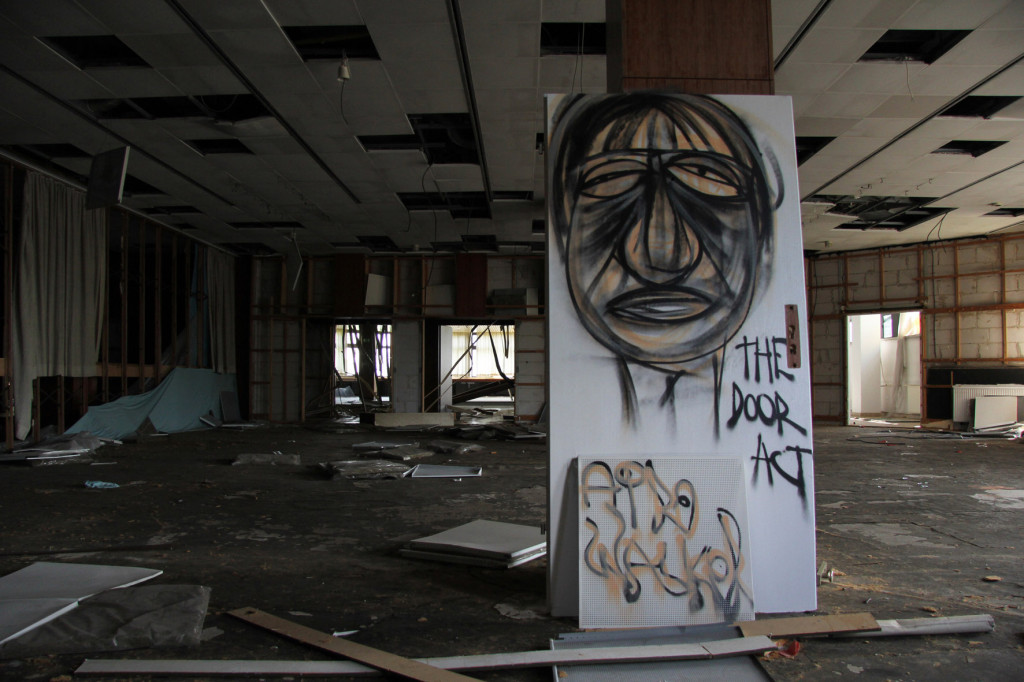 It was then immediately obvious why the owners wanted to keep people out – vandals had clearly run amok in the building smashing or ripping out just about everything they could damage. 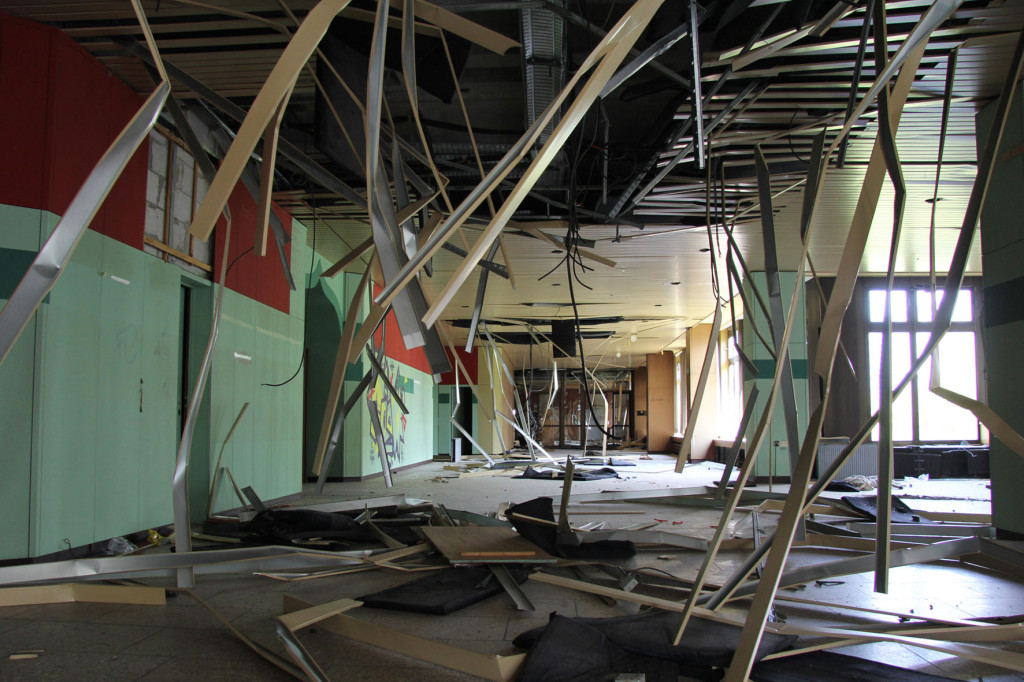 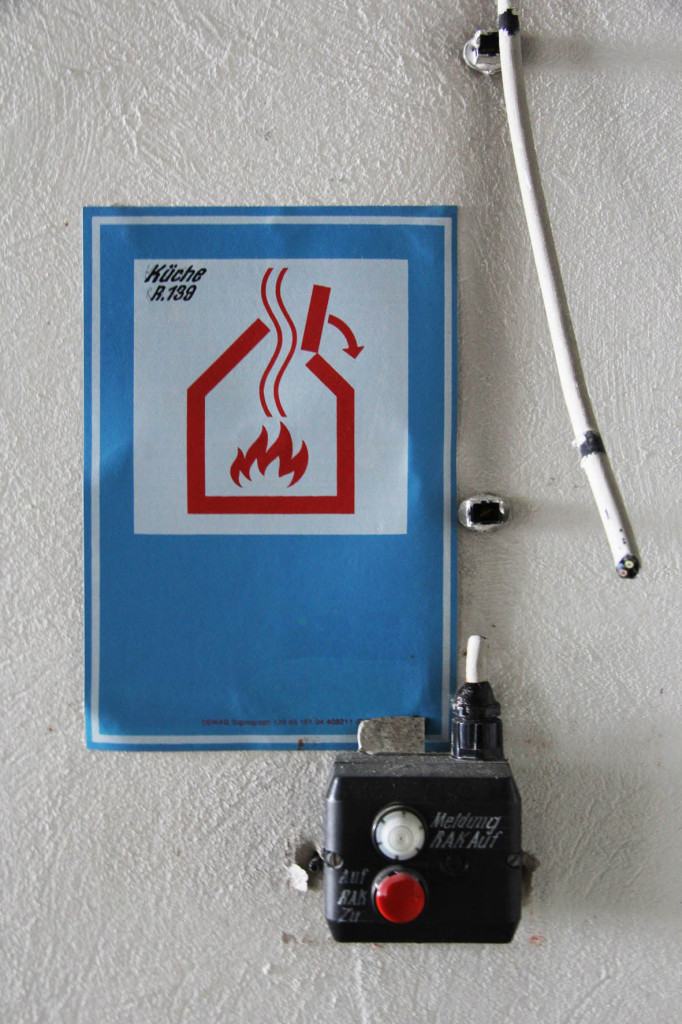 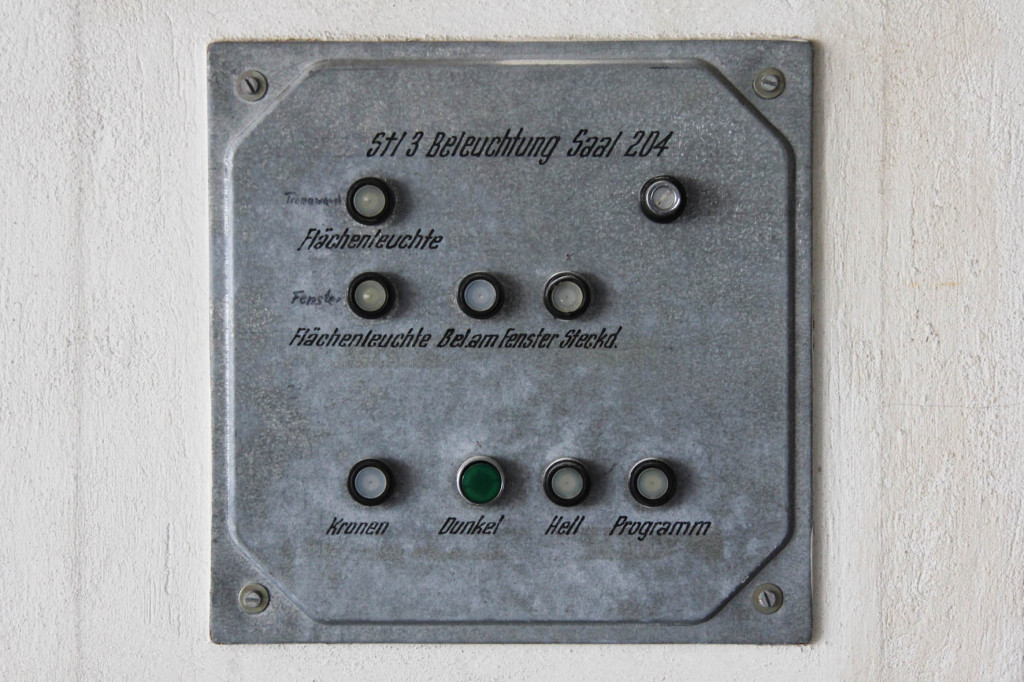 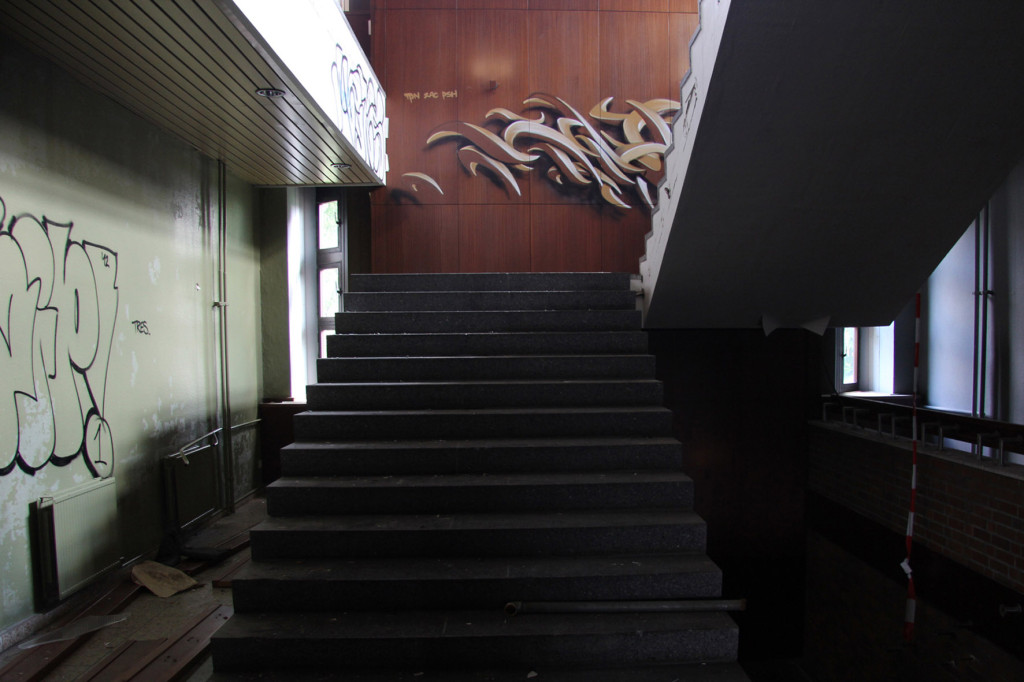 There were however still some signs of the buildings previous use and even some plans for renovation.

In 2007/8 it was used as a set for the Sat. 1 series GSG9 – Ihr Einsatz ist ihr Leben.  There are still remnants of its use for filming – the glass of one room bore the engraving ‘Isolation Station’.

The vandals must have decided that their handiwork was falling short of their desire for destruction and in July 2013 the Congress Centre was the victim of an arson attack and the building burnt for several hours.

In 2010, the land on which the Conference Centre and Sports Hotel stands was acquired by a group of international investors, who have engaged the Moritz Group to develop the site on their behalf.

Moritz Group, led by long-time Hohenschönhausen resident Dirk Moritz, is also responsible for the rediscovery of an abandoned Cabaret Theatre in Mitte that I visited in 2012.

The Square³, as the planned development is currently known, echoes the land’s sporting history with its three towers of varying heights in gold, silver and bronze symbolising a podium.

As with all development projects in Berlin, these things take time.  When I went back to the Kongresszentrum in August 2014 there was no sign of any progress. The entry point I used on my previous visit had been sealed even more securely than before – this time there were some chunky bolts where screws had been used before but some enterprising soul had found another way in. 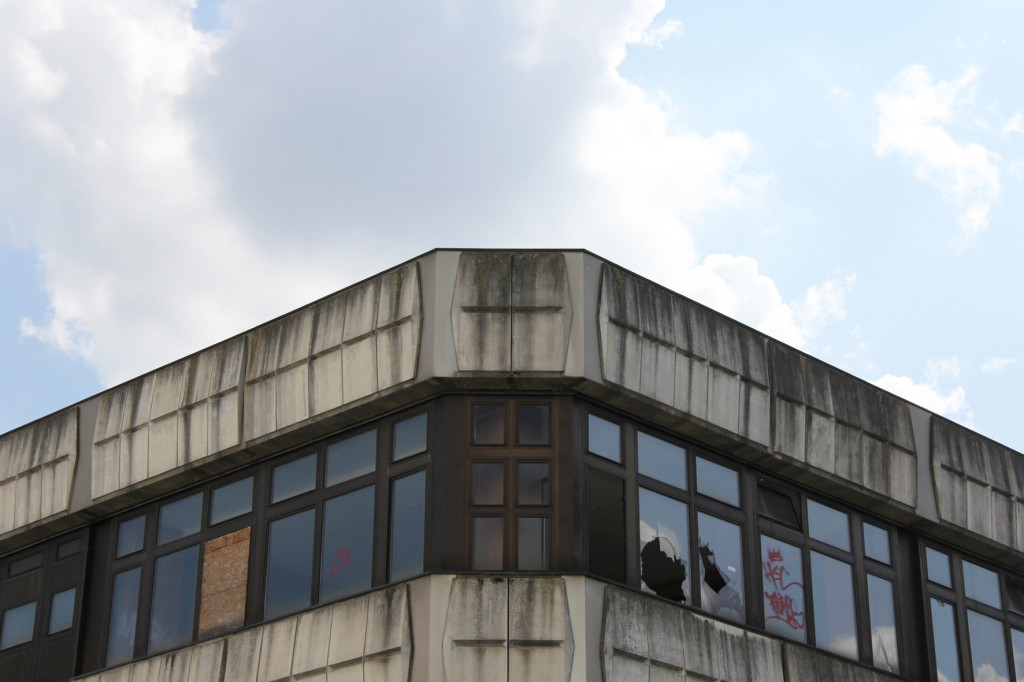 Whilst there has been no discernible movement on the demolition and redevelopment of the Kongresszentrum des Sportforums Berlin it is only a matter of time.  The owners are clearly doing their best to minimise the likelihood of explorers so the site is no longer truly abandoned, just dormant and decaying.  If you would like to glimpse this relic of DDR Berlin you will need to hurry.  It seems impossible to imagine the place looking any worse but please respect the opportunity to step into the past and leave the building in the same dilapidated state you find it.