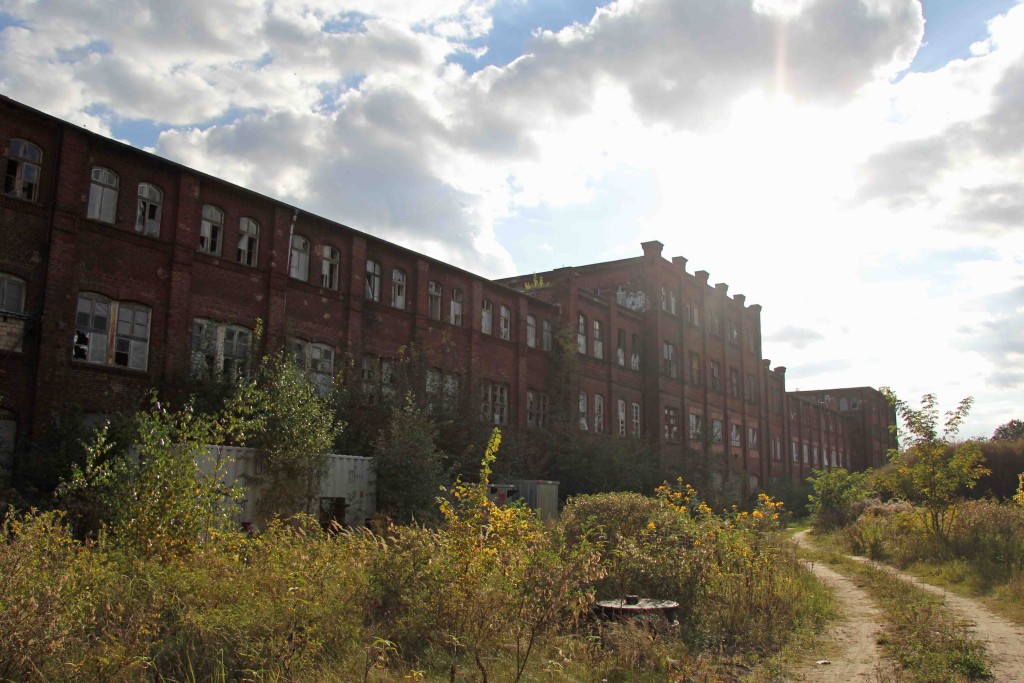 In autumn sunlight the abandoned industrial laundry and dyeing factory on the Spree, previously home to  VEB Rewatex, looks almost inviting as an urbex destination but in the snow and cold of a Berlin winter it’s a different story.

When Digital Cosmonaut suggested a trip out to Spindlersfeld last October to explore an abandoned factory I jumped at the chance.  By coincidence, just a few weeks before, as we stood on the opposite side of the river in Köpenick, Bine had told me about the factory where Dry Cleaning had first been developed.

Wilhelm Spindler formed W Spindler, a laundry and dyeing company, in Berlin in 1832 and the headquarters of the firm moved to Spindlersfeld (then Oberspree) in 1873. 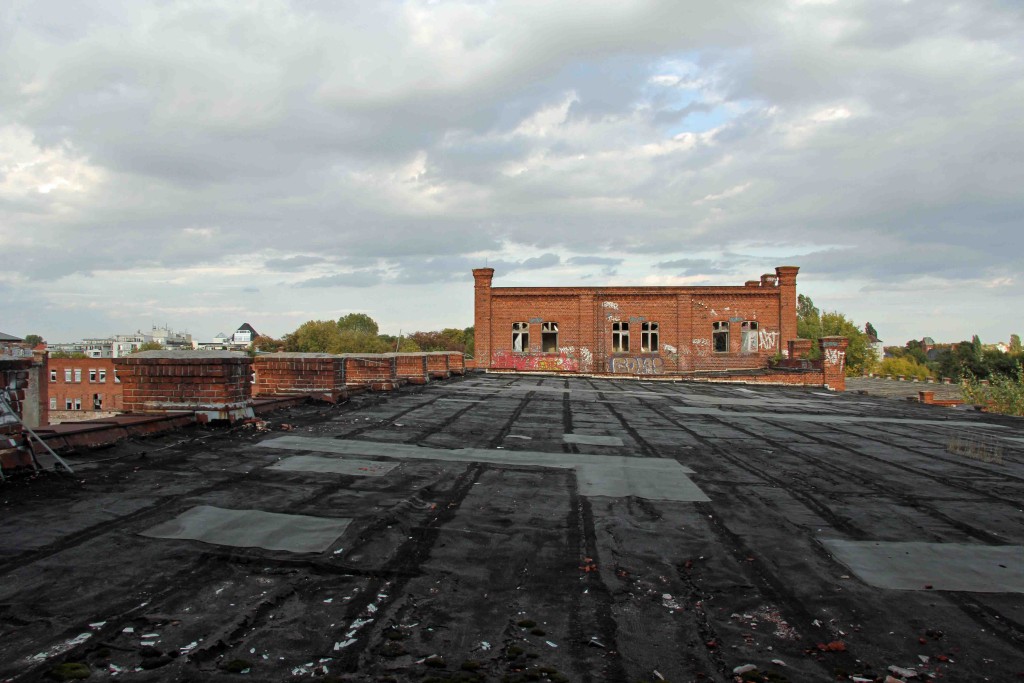 The company was acquired by the state in 1949 and renamed VEB Blütenweisß.  In 1961 the name changed to VEB Vereinigte Wäschereien Berlin Rewatex (VEB Rewatex for short) and in 1981 to VEB Kombinat Rewatex.

After the fall of the Berlin Wall the company was again renamed, this time becoming Rewatex AG and was acquired by Kölner Larosé Hygiene-Service-GmbH in 1992.  Shortly after re-privatisation operations ceased and the factory at Spindlersfeld has been empty ever since.

The main factory building is laid out as a square, which means seemingly endless corridors and open rooms with many supporting columns. 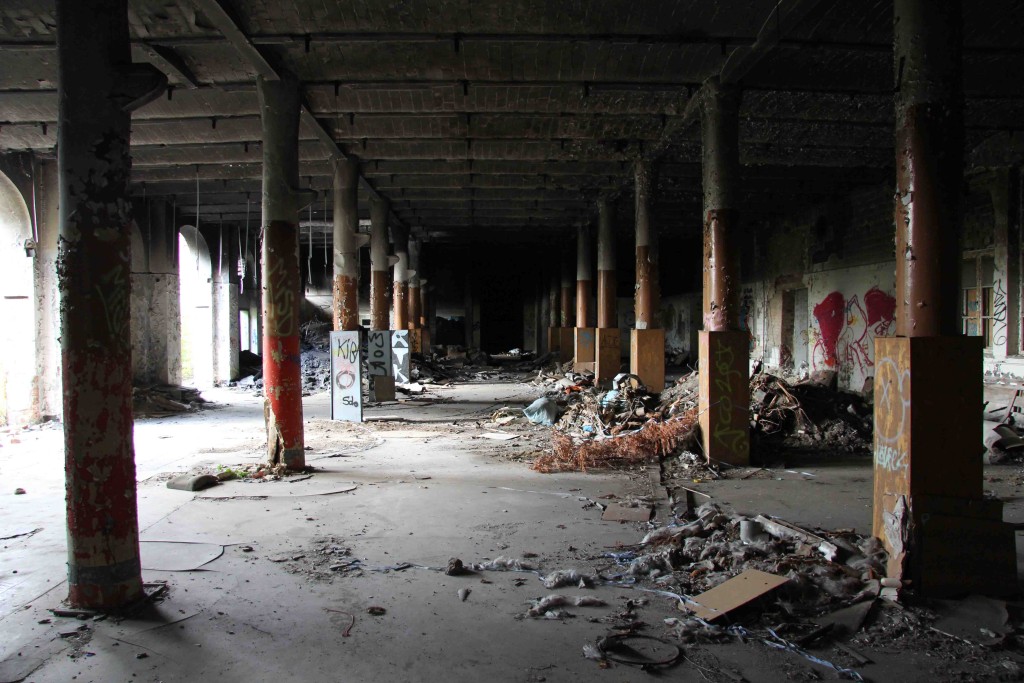 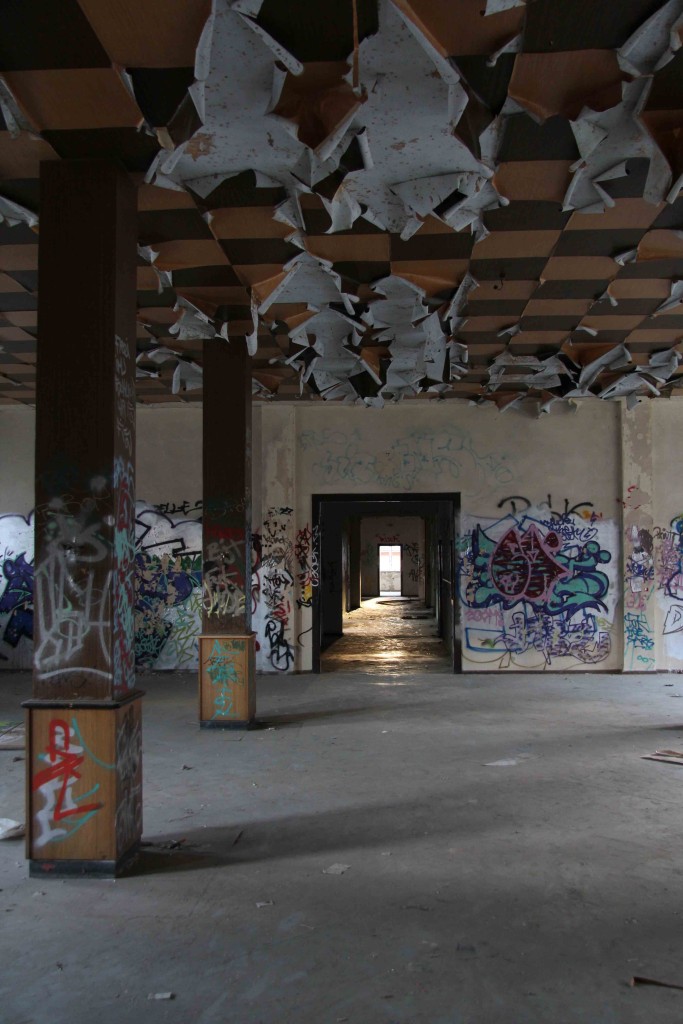 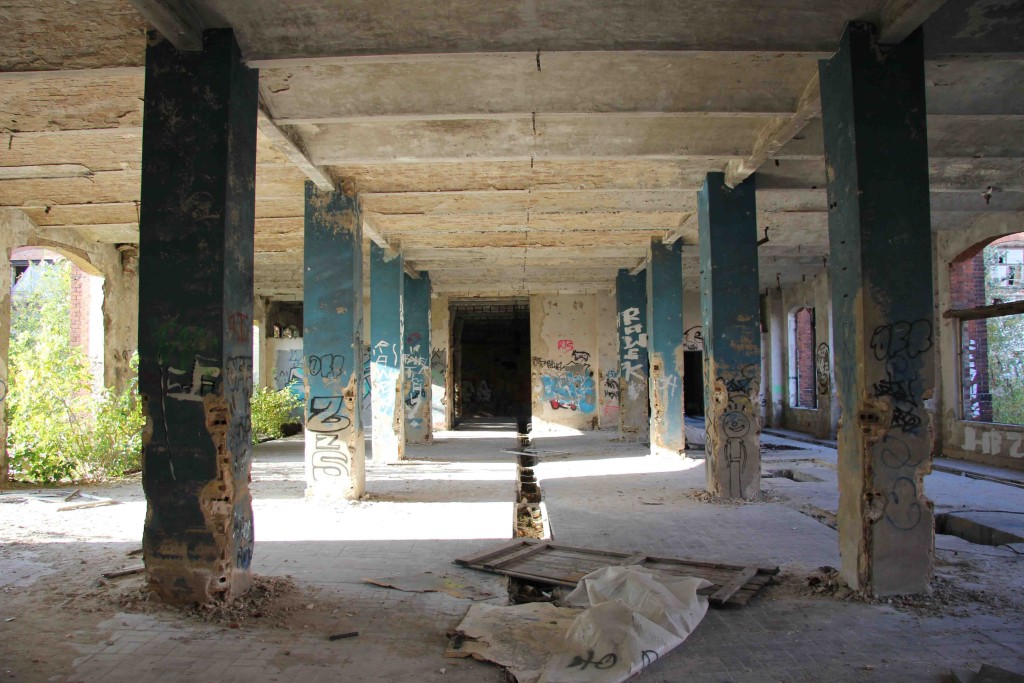 There is also a central courtyard, now overgrown with weeds, which helps give a sense of scale to the complex and is useful when orienting yourself whilst exploring. 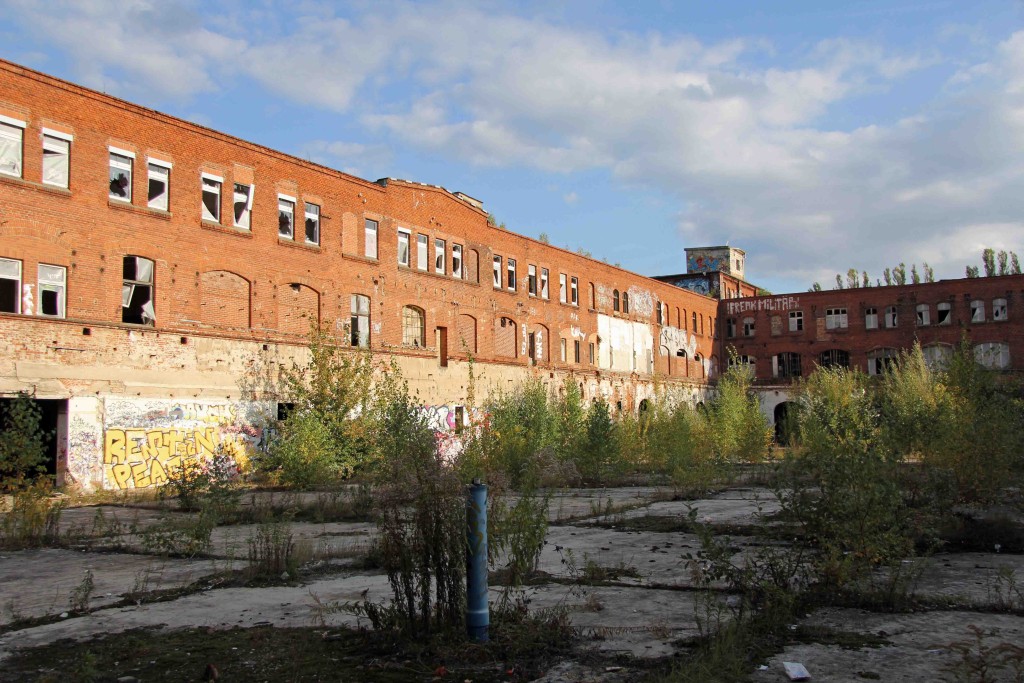 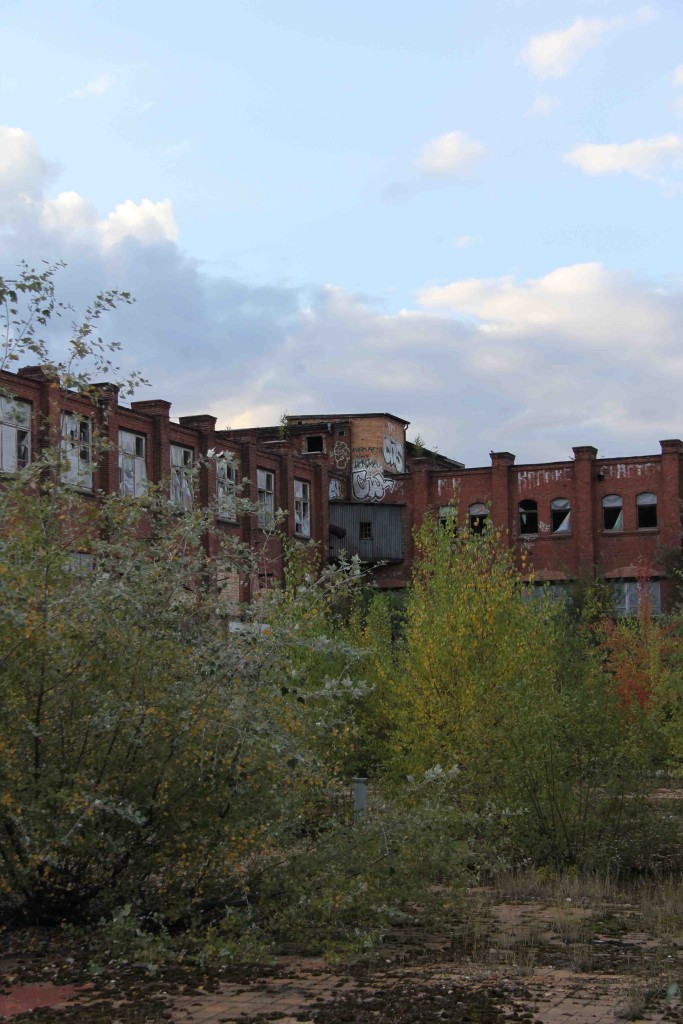 There are signs of the administrative functions of the upper floors of the building with invoices, ledgers and other paperwork strewn across the floors, some showing signs of fire damage. 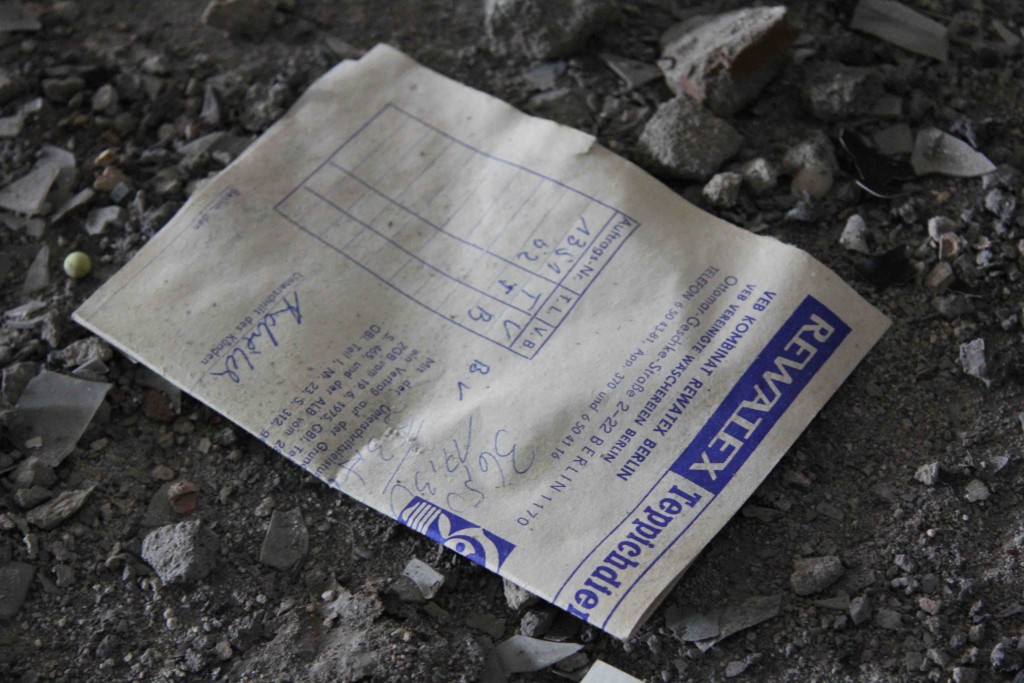 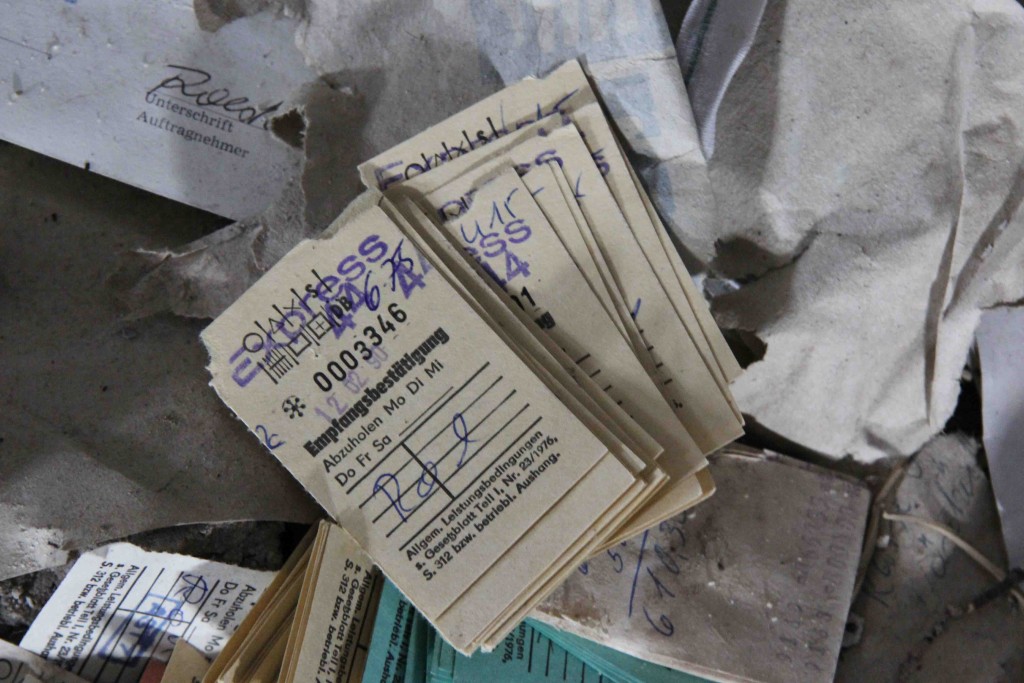 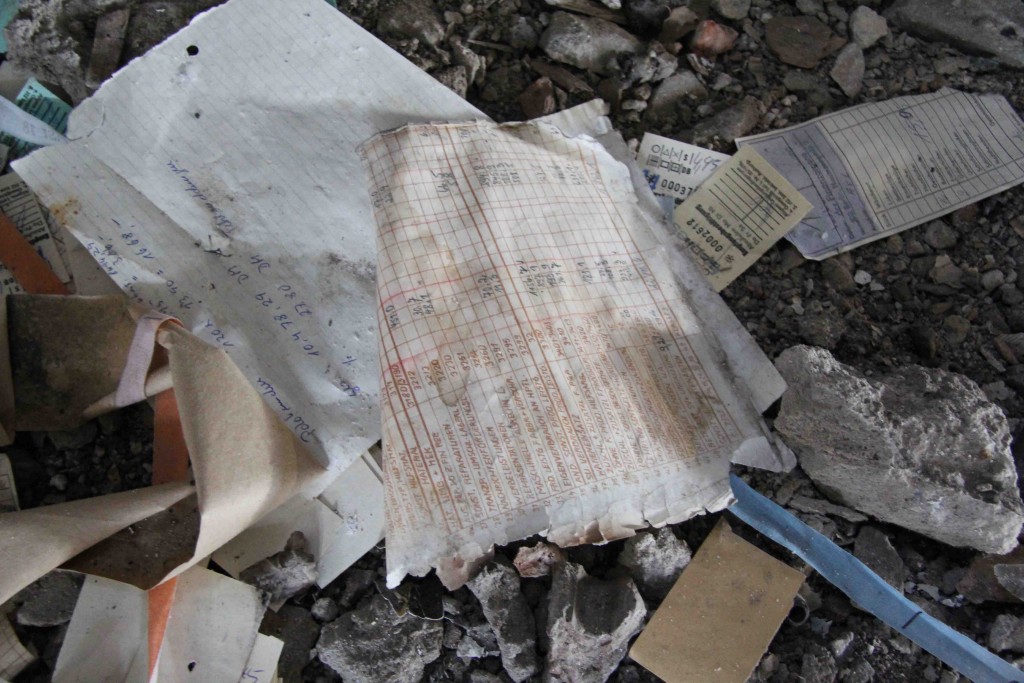 There are the usual signs of disrepair and neglect around the building – floors are warped, ceilings are collapsing and there is graffiti on many surfaces. 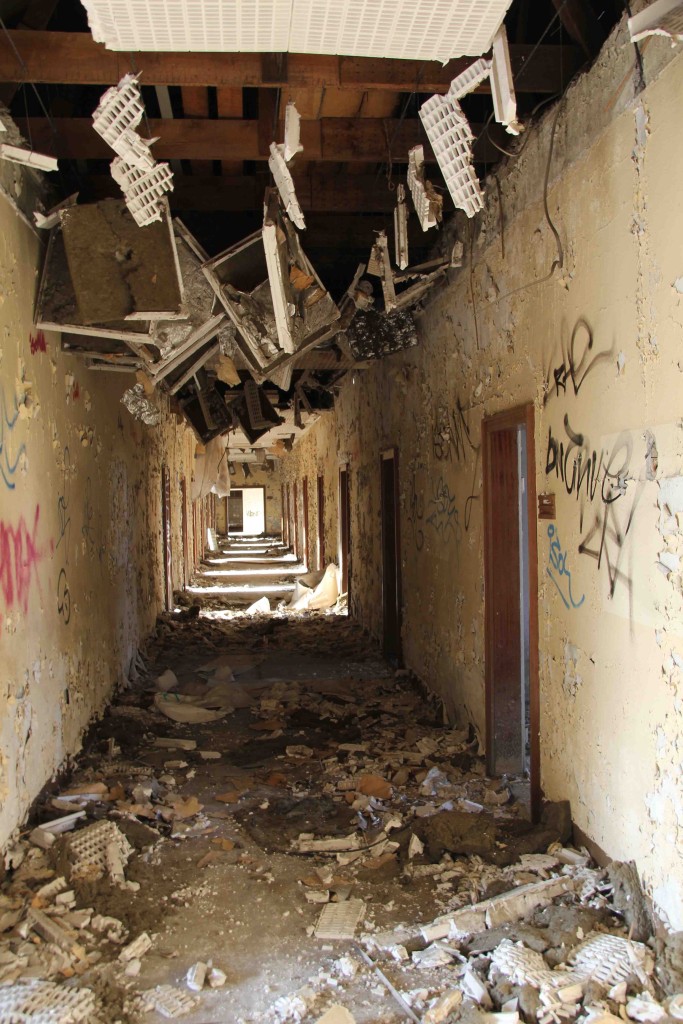 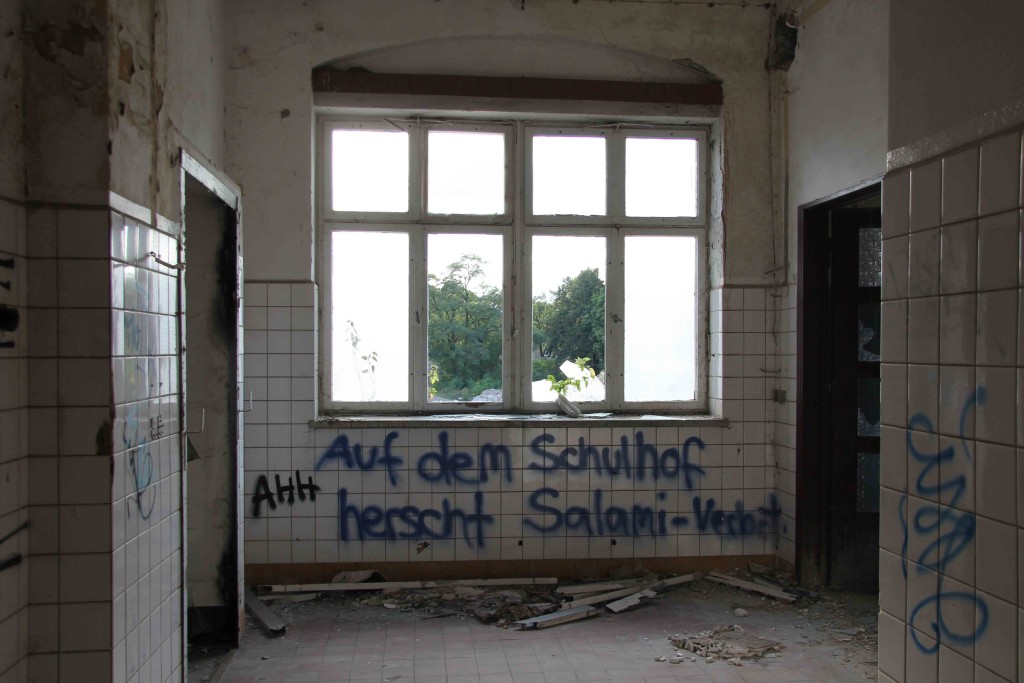 Someone may have been contemplating a repair on this hole in an upper floor but I don’t think Lego bricks would really serve the purpose. 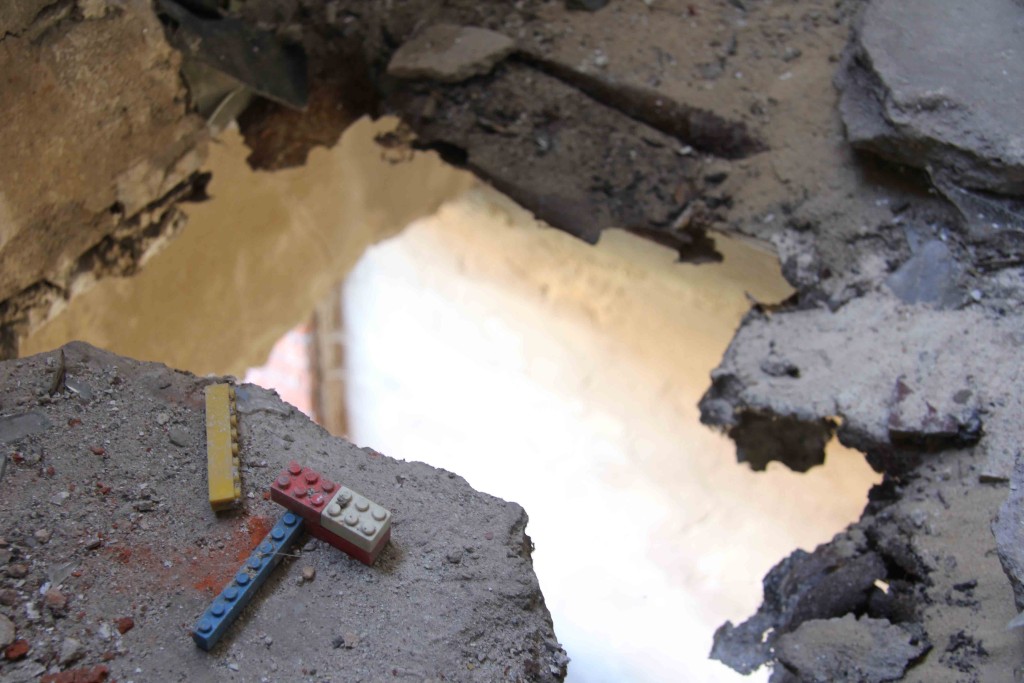 There are also a couple of outbuildings worth poking your head into, though there is not much to be seen in them. 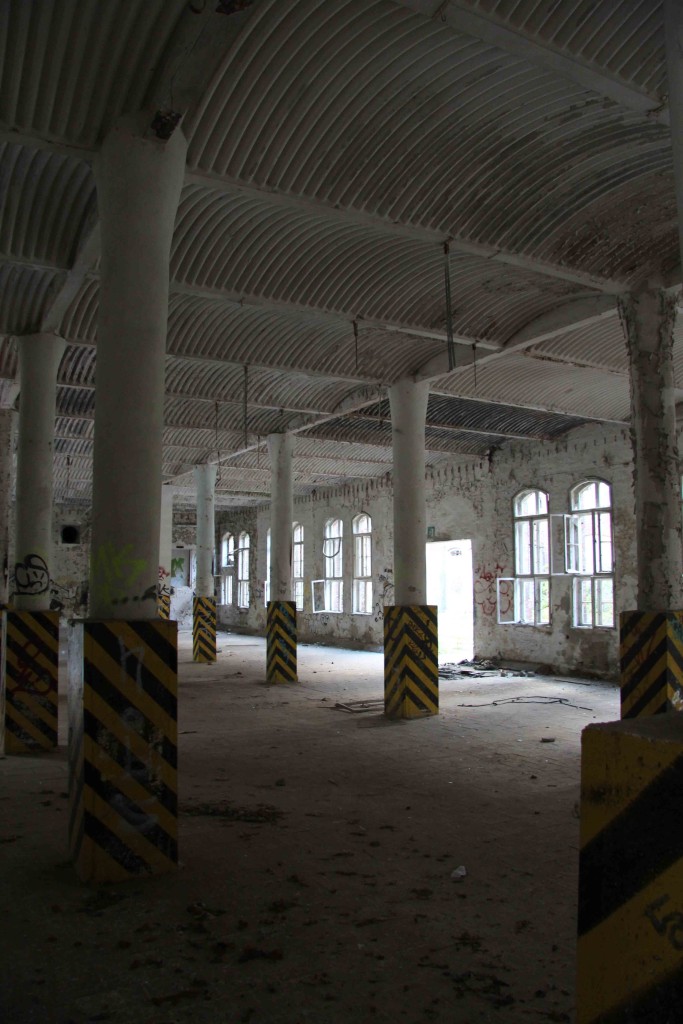 My revisit a couple of weeks ago was prompted by one of my favourite Berlin based Street Artists, KEN, posting a photo on his Facebook page of a piece he had painted at the factory. 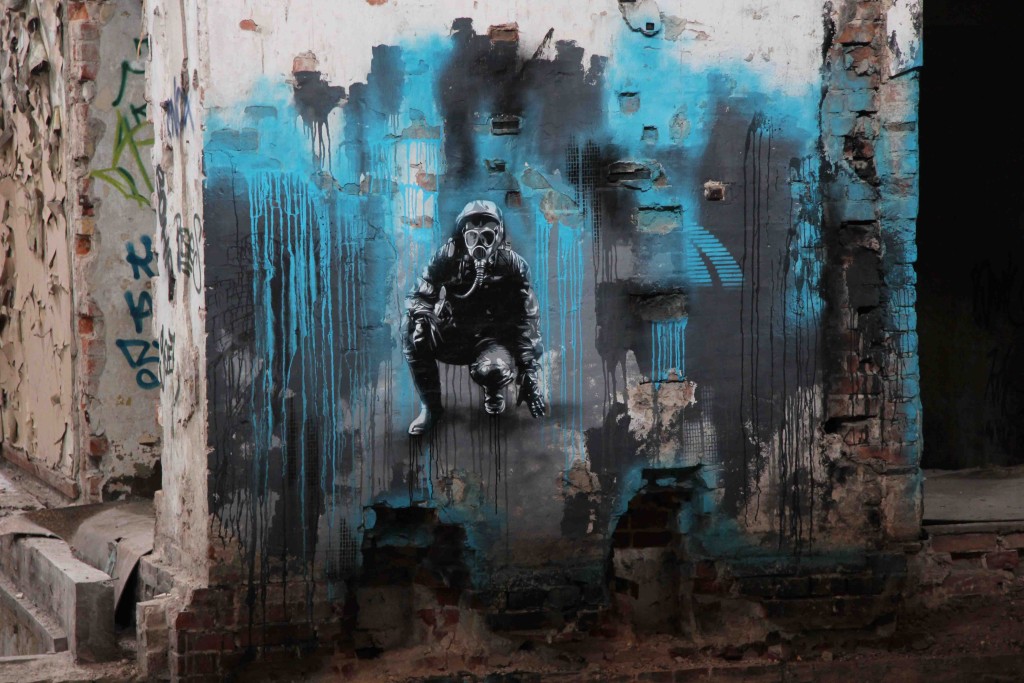 It took me a little while to find, as there is only one opening, which would have been a doorway when the room had a floor, that gives a view of the piece. 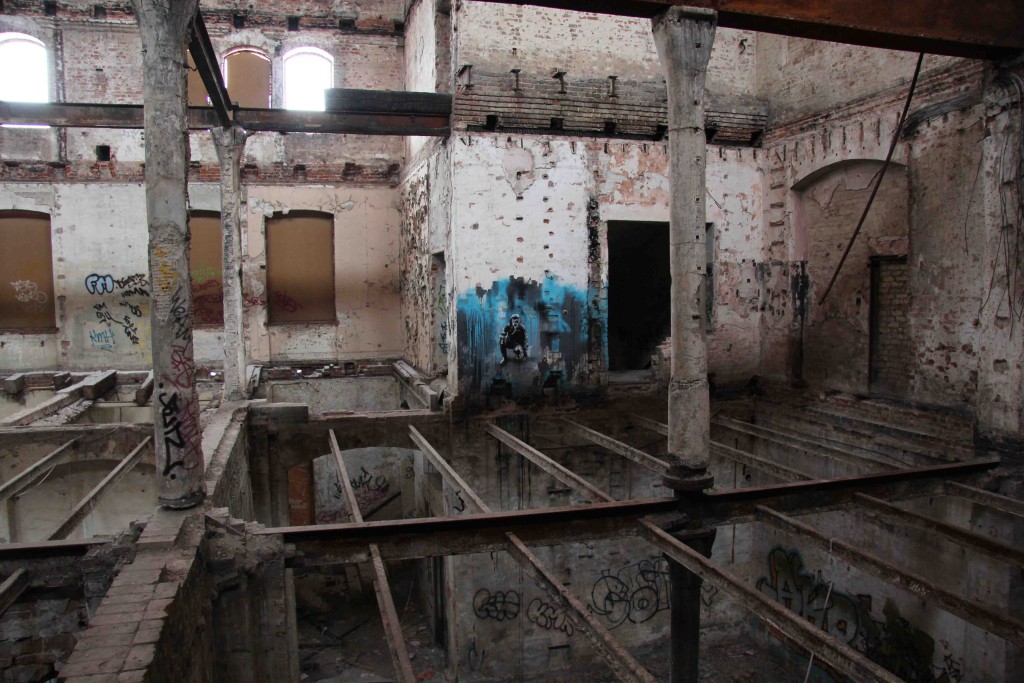 The room in which it was painted was badly damaged by a fire on the night of 29 September 2006, which destroyed the upper two floors.  A new roof has since been added – the pristine wood incongruous amongst the damaged brickwork and piles of rubble below.

I didn’t hang around too long on my revisit to the abandoned Rewatex laundry in Berlin because there were animal tracks in the snow not accompanied by human footprints so I wasn’t entirely sure I was alone.  Besides, the site wasn’t as inviting as my first visit as the following two shots show. 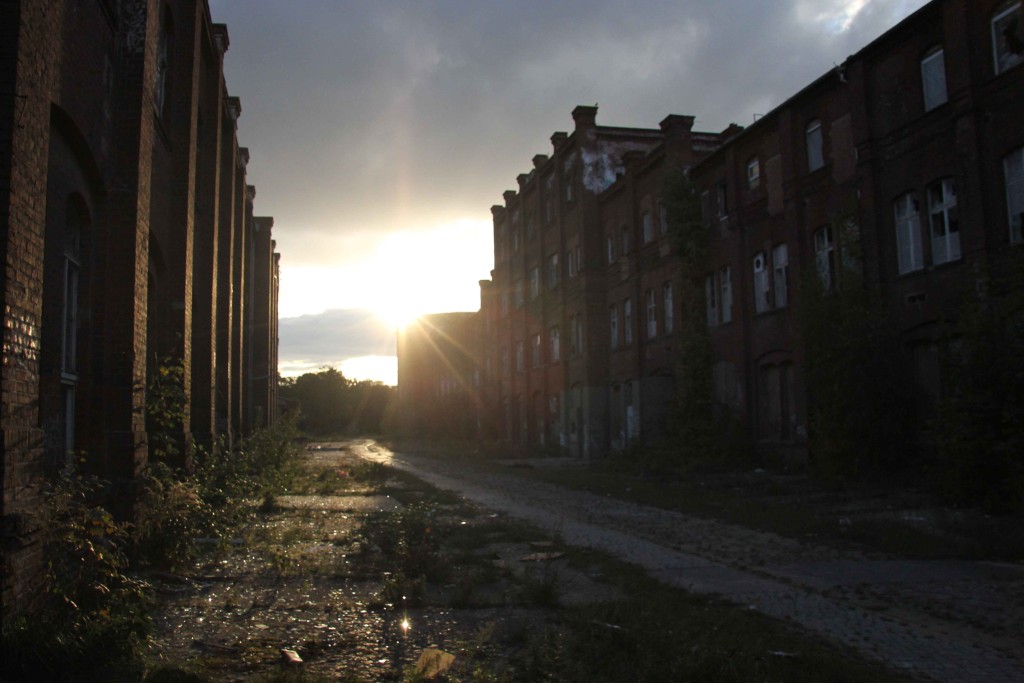 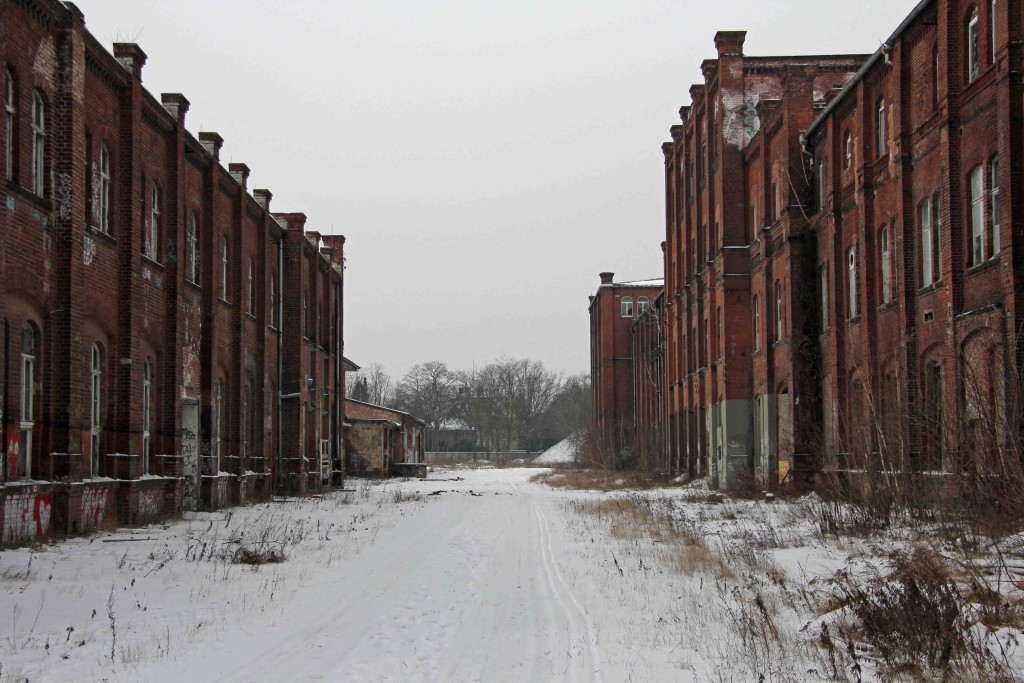