The 8th annual Berlin Festival of Lights is took place 10 – 21 October 2012.  During the festival, a number of Berlin’s most famous landmarks and some lesser known buildings were transformed with light installations, laser animations and video projections.

I started my tour of the Festival of Lights locations on Saturday in the Gendarmenmarkt, which I chose as there are 3 buildings taking part in close proximity.

One of a pair of similar, though not identical, churches on the Gendarmenmarkt, the Deutscher Dom (German Cathedral) is on the southern side of the square. 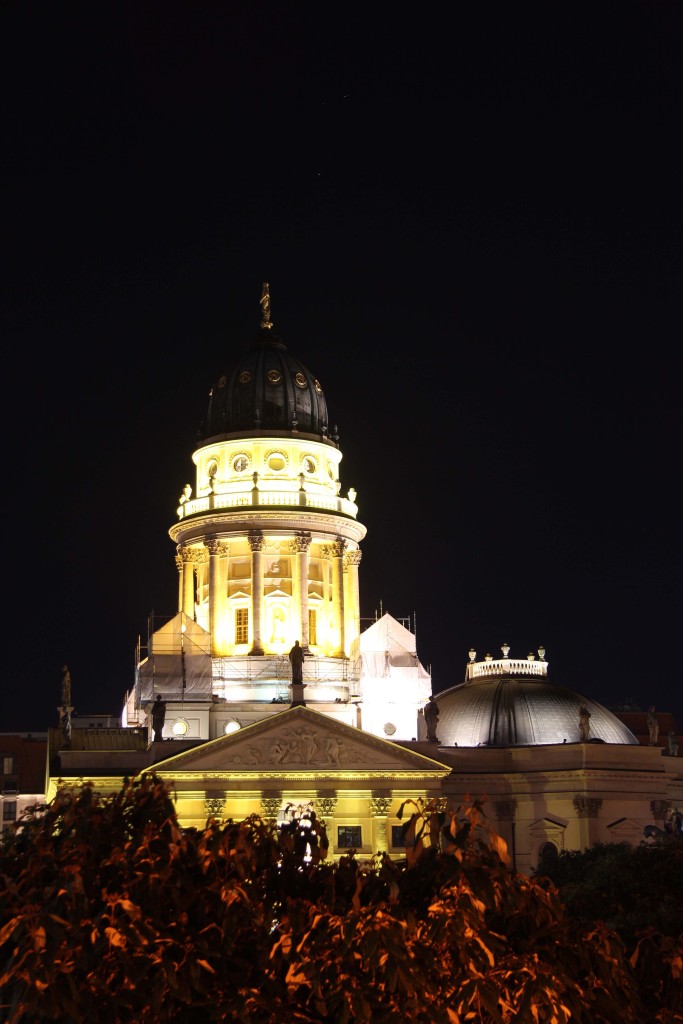 Nestled between the two churches on the Gendarmenmarkt is Konzerthaus Berlin (Berlin Concert House). 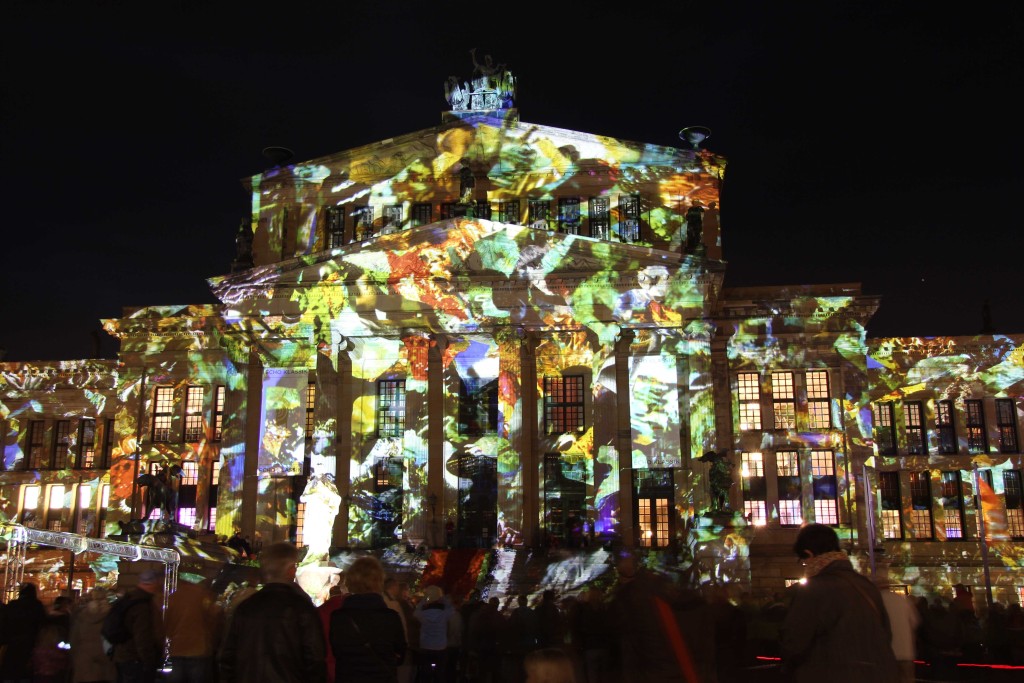 The Französischer Dom (French Cathedral) certainly looked very different from when I climbed it in January. 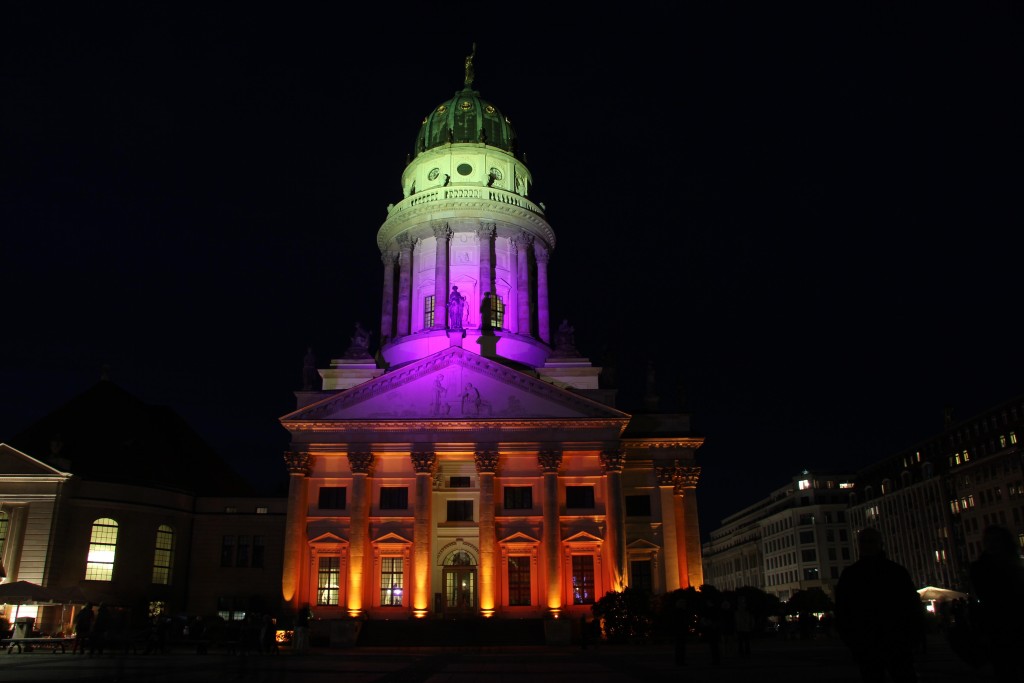 It wasn’t just the fronts of some buildings that were lit up.  This statue lit up in orange on the side of the Französischer Dom caught my eye. 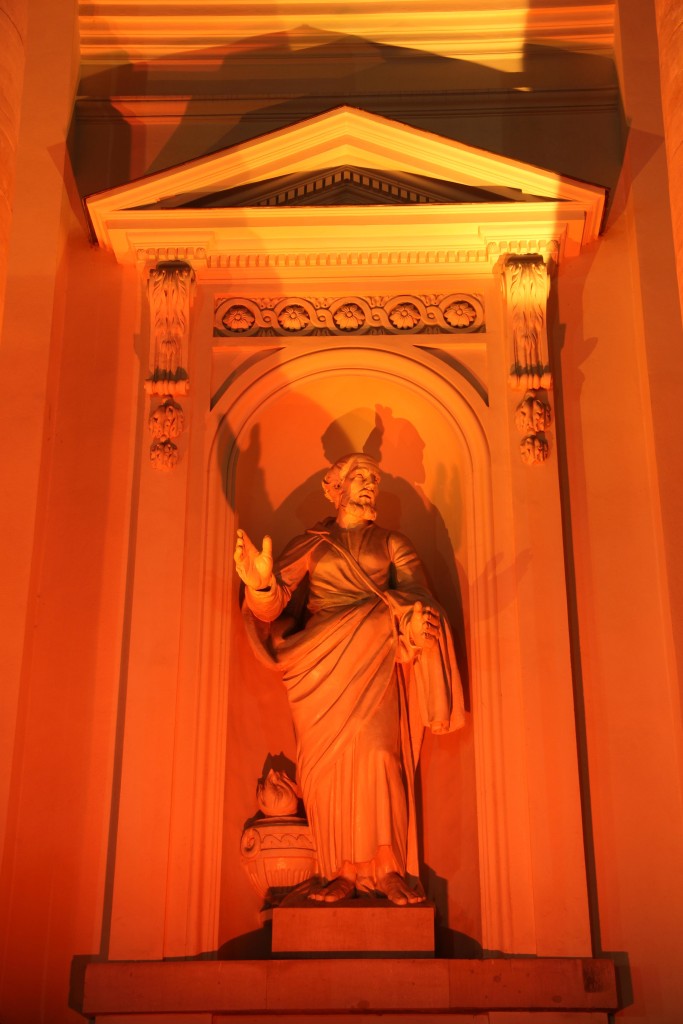 The Fernsehturm has to be one of my favourite buildings in Berlin.  Dominating the city skyline, at 368m it is visible from almost everywhere.  The views from it are also spectacular and I was fortunate enough to watch the sunset from the Fernsehturm recently. 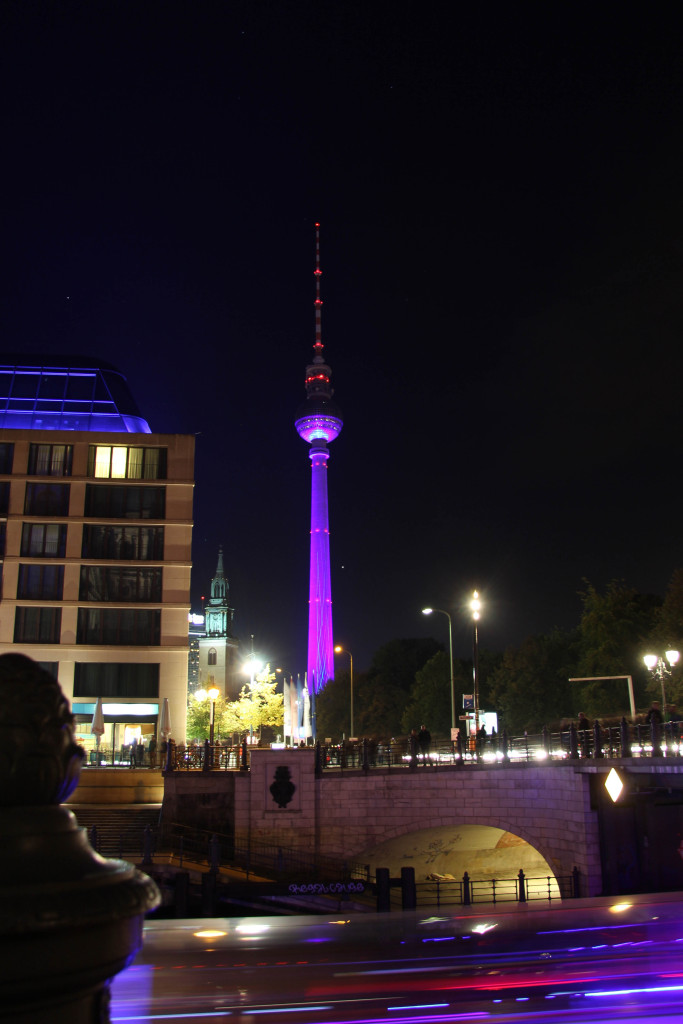 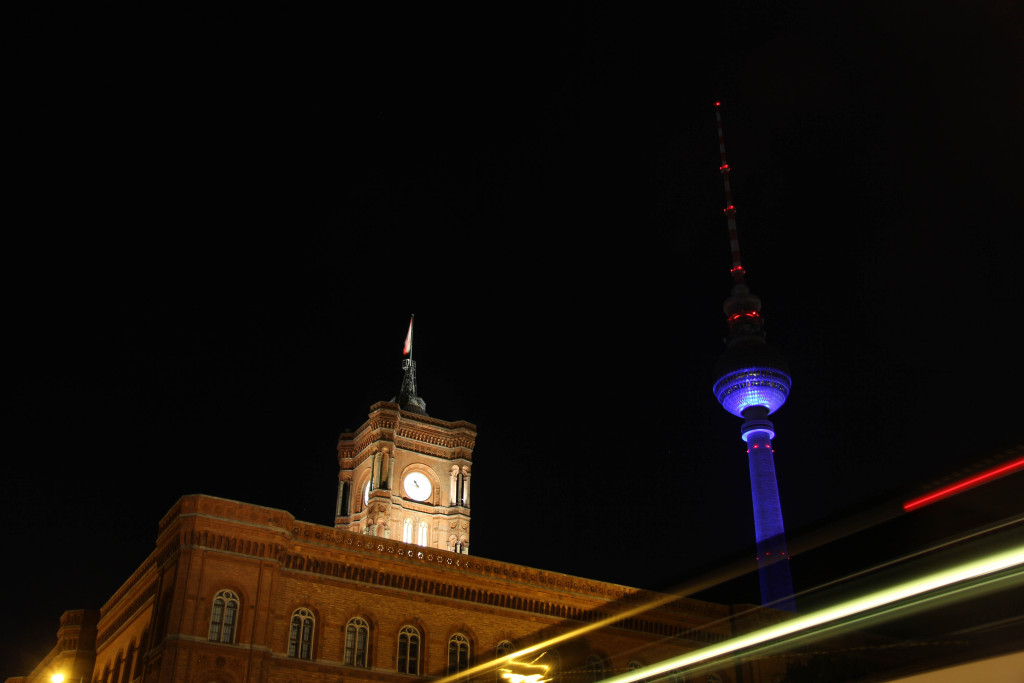 On Sunday, I was lucky enough to be invited by my friends Bine and Gilly (of Gilly’s Playground) to take a tour of a number of West Berlin Festival of Lights locations.  After an excellent Lasagne, we headed off in the car with Bine driving.

This allowed me to see some installations beyond the centre of Berlin that I wouldn’t otherwise have got to.

Siemens AG had lit up a number of buildings in the Siemensstadt. 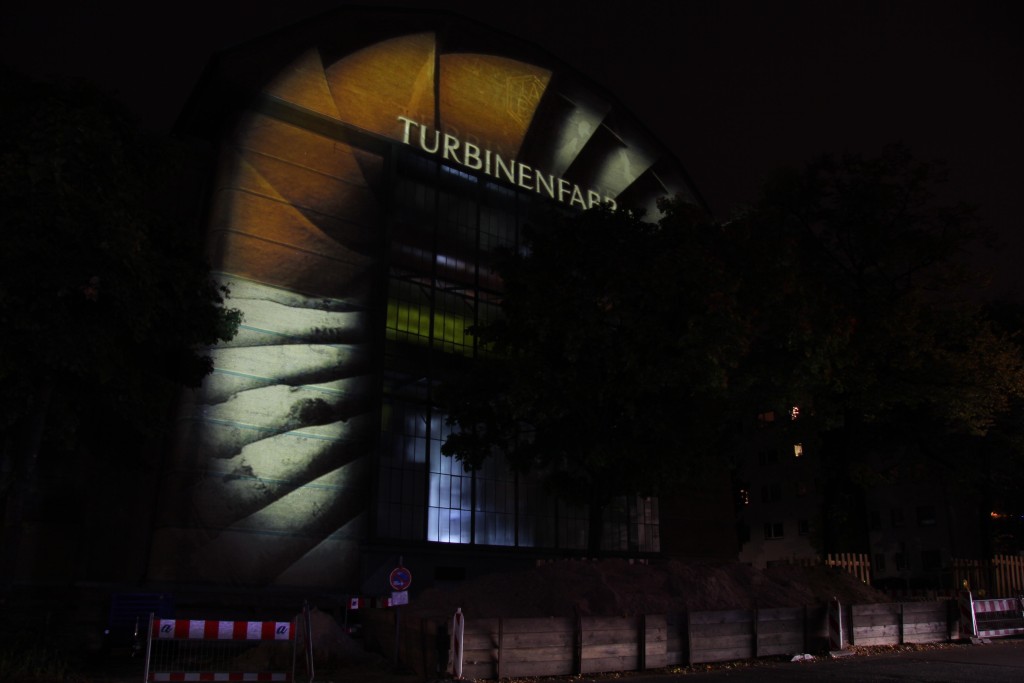 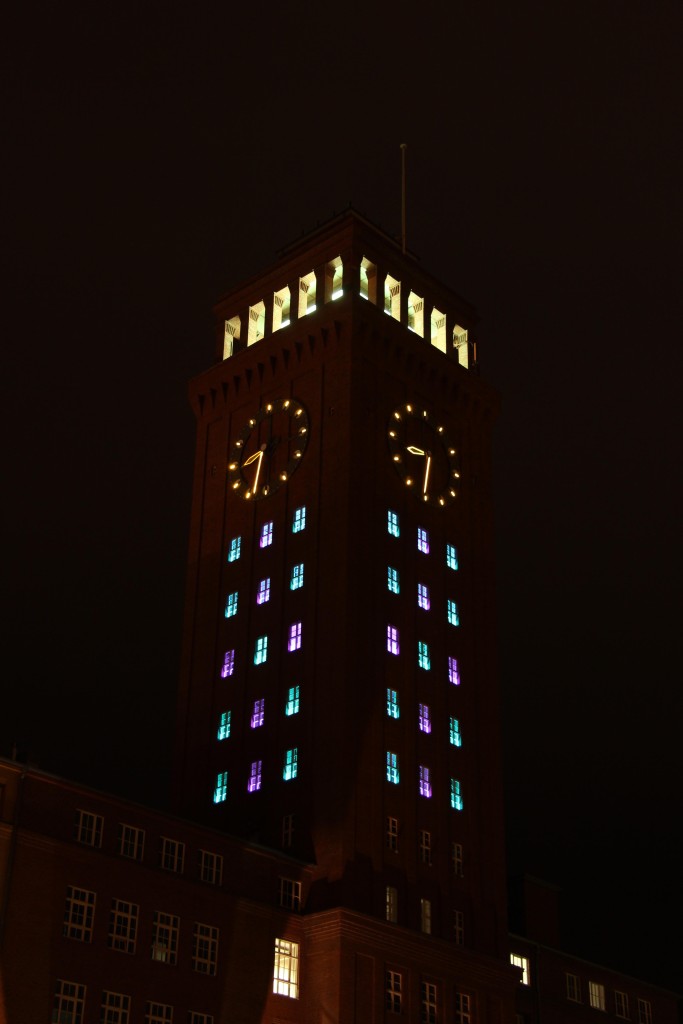 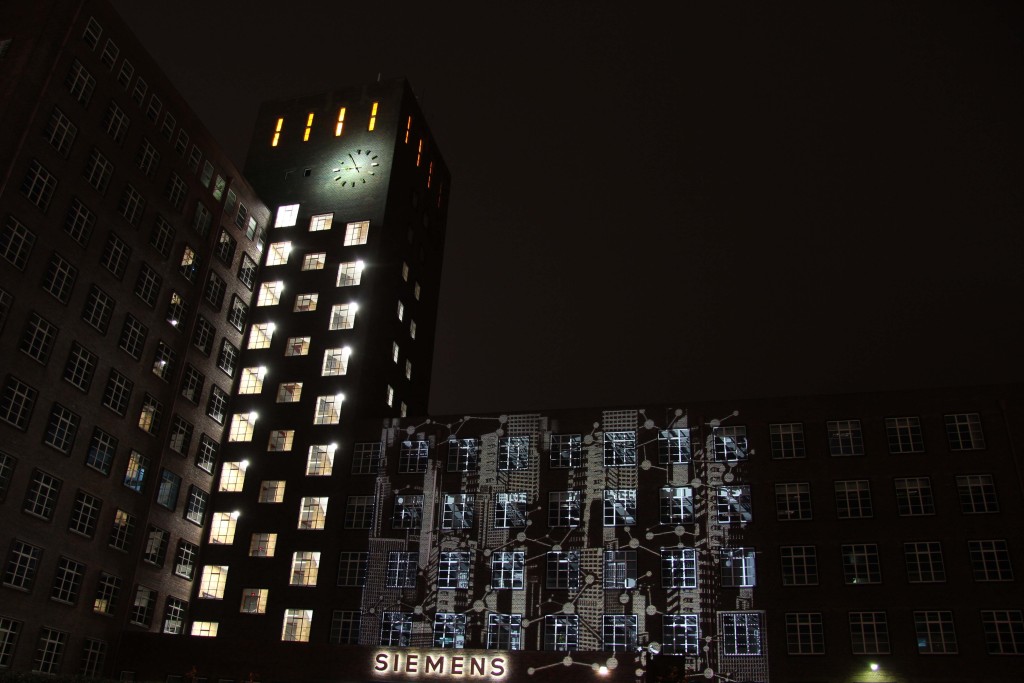 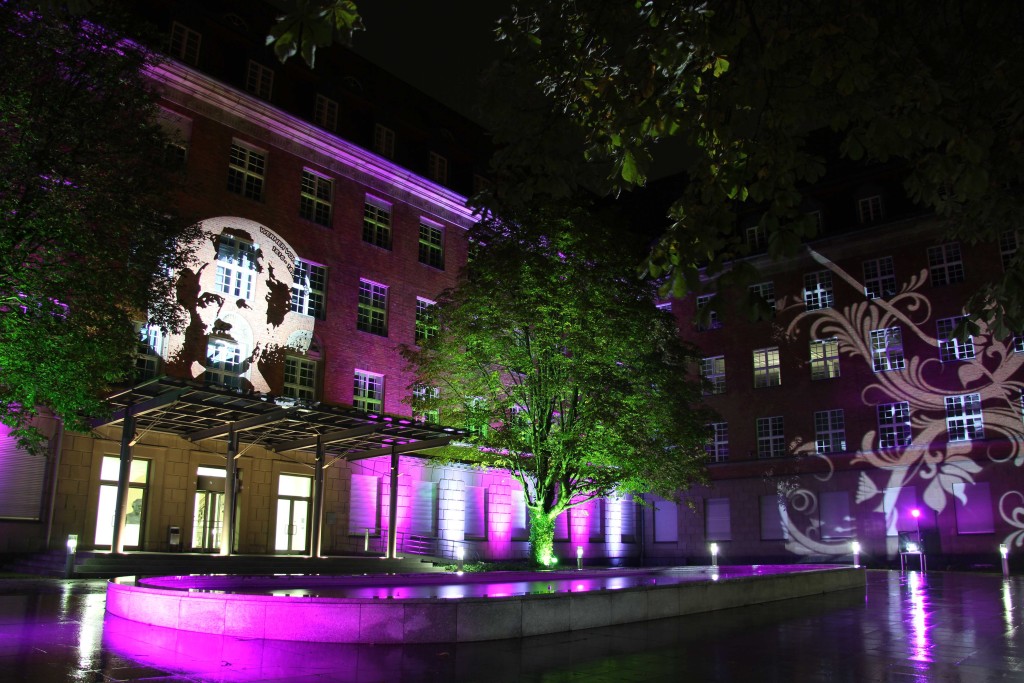 The roof terrace of the RBB Fernsehsendezentrum (RBB TV Broadcasting Centre) was transformed by its light installation. 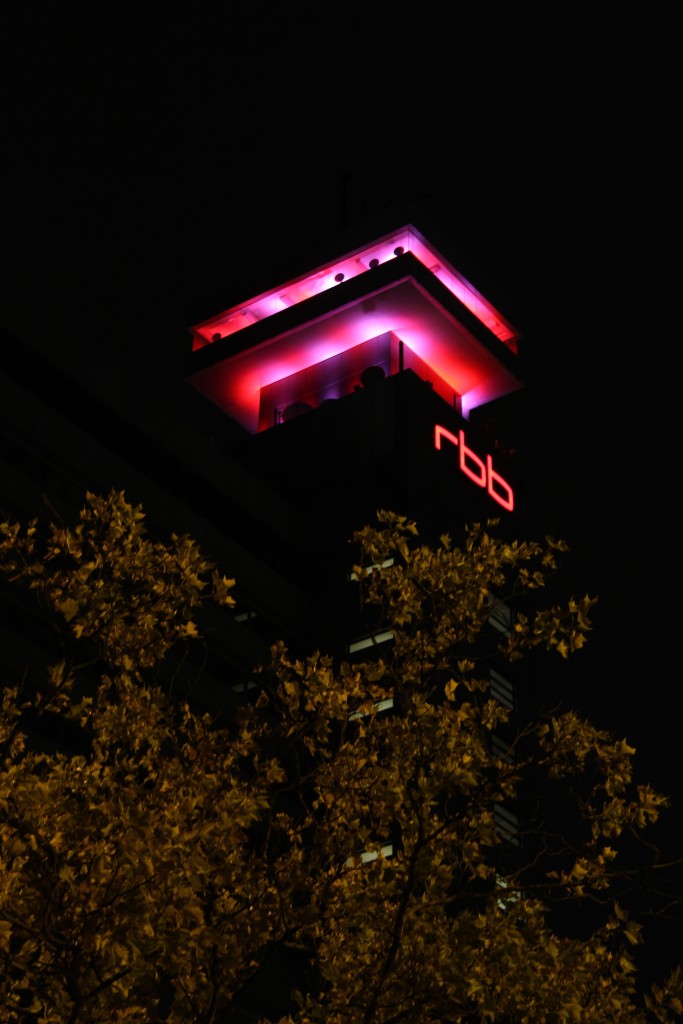 The Funkturm was West Berlin’s TV Tower and whilst dwarfed by its counterpart in the East is still an impressive building, especially when it’s lit up against the night sky. 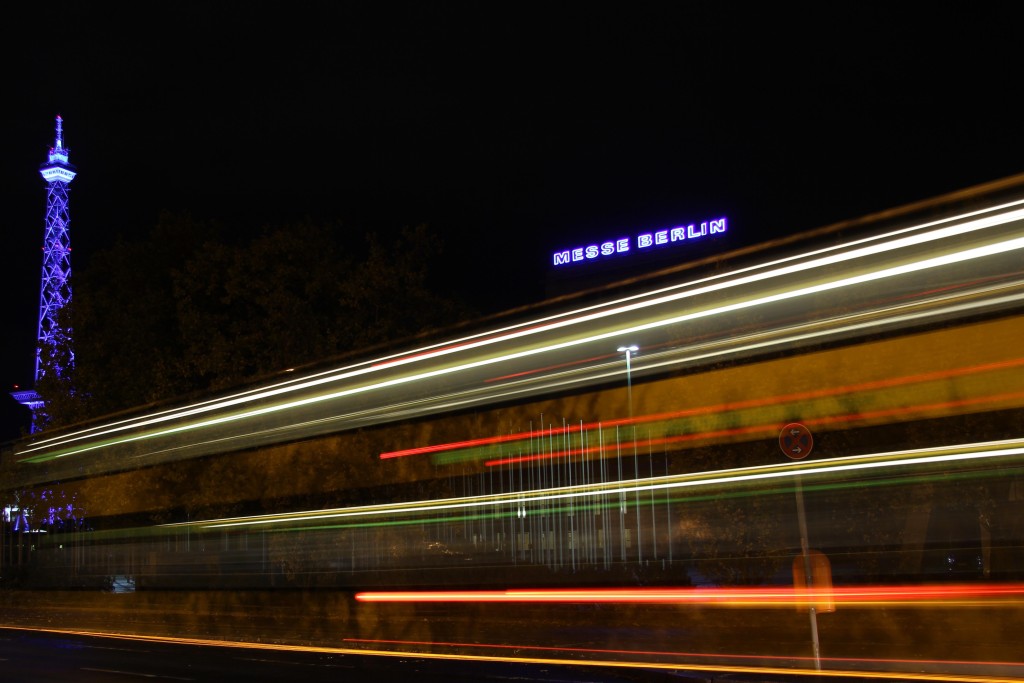 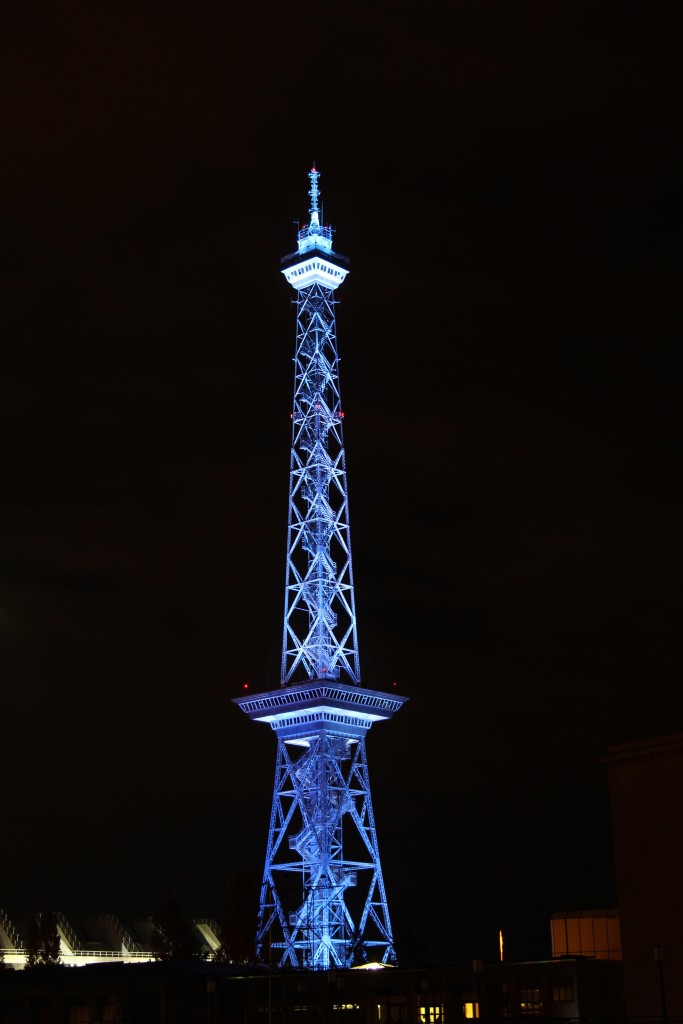 Elefantentor am Zoologischer Garten (The Elephant Gate at Berlin Zoo)

The larger of Berlin’s two zoos, the Zoologischer Garten is said to be the most visited zoo in Europe.  It is located within The Tiergarten, which is certainly worth a visit in its own right. 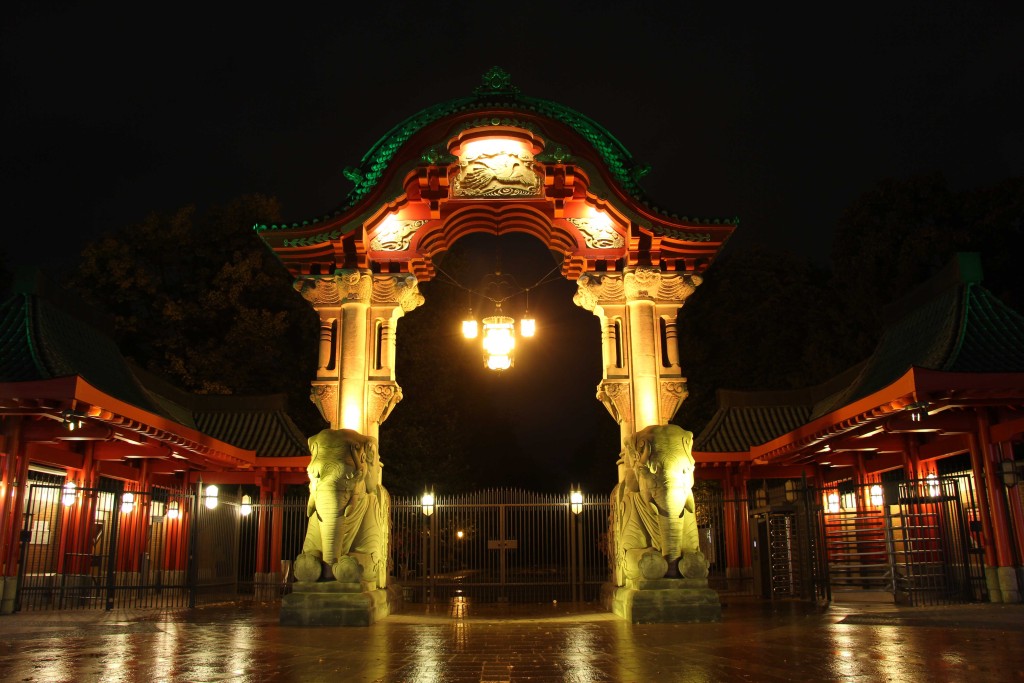 Known by Berliners as Gold Else, the Siegessäule (Victory Column) towers over the Tiergarten and affords spectacular views of Berlin, as you can see from my post here. 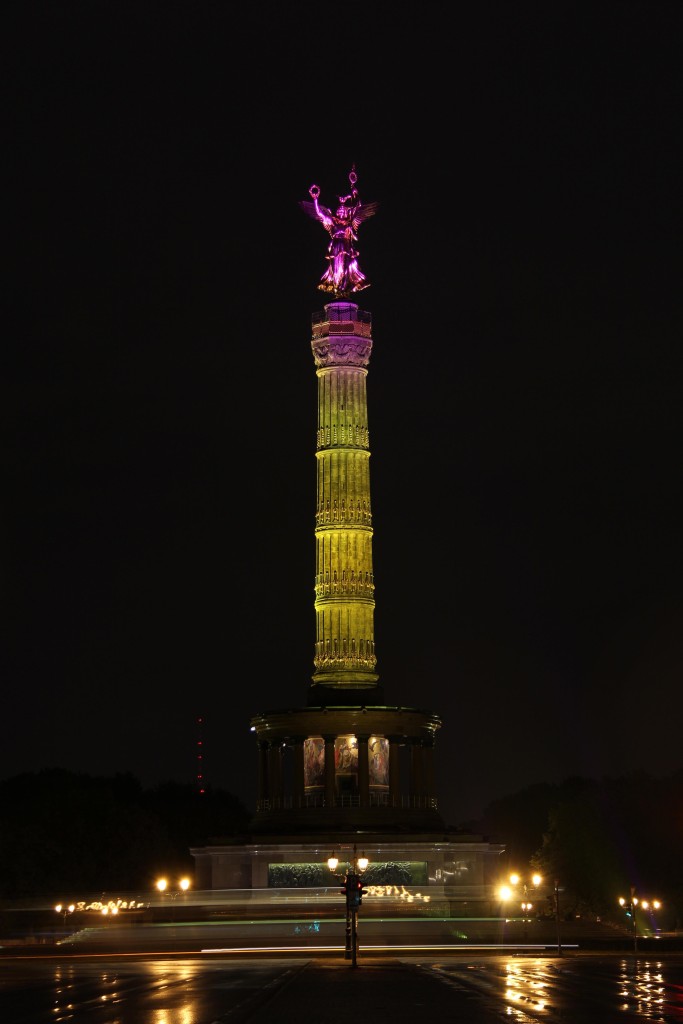 The light projections at the Berliner Dom (Berlin Cathedral) are sponsored by Urlaubsland Österreich (Tourist Country Austria) and had what I originally assumed was a ‘Winter’ theme.

When I first went here on Saturday there was a silent disco taking place on the Lustgarten so the area was incredibly crowded with people so I went back on Monday for some clearer shots. 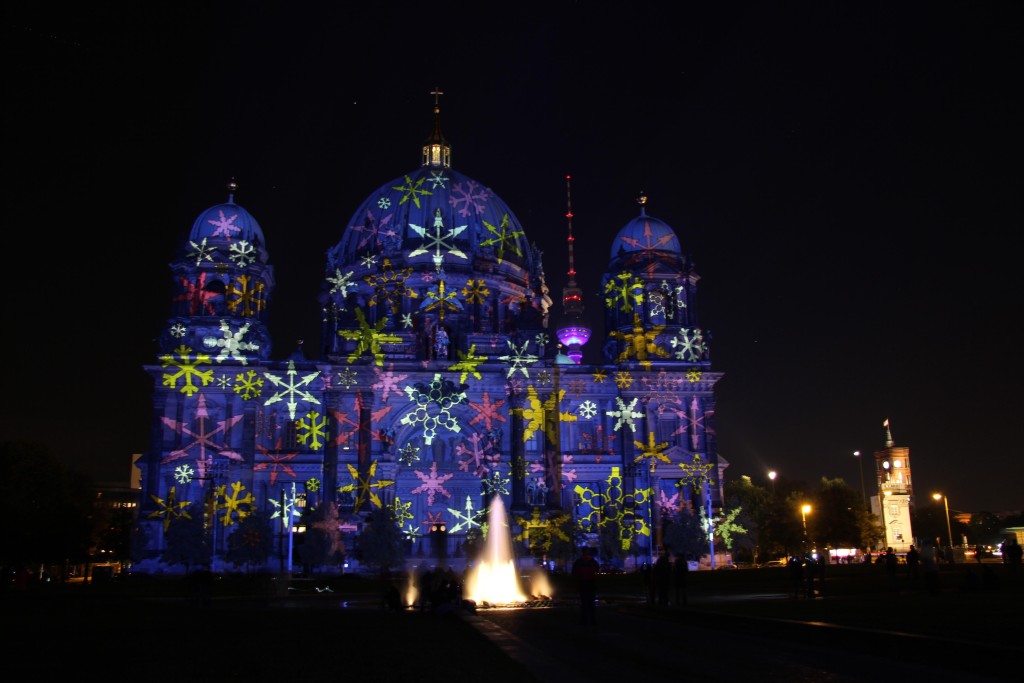 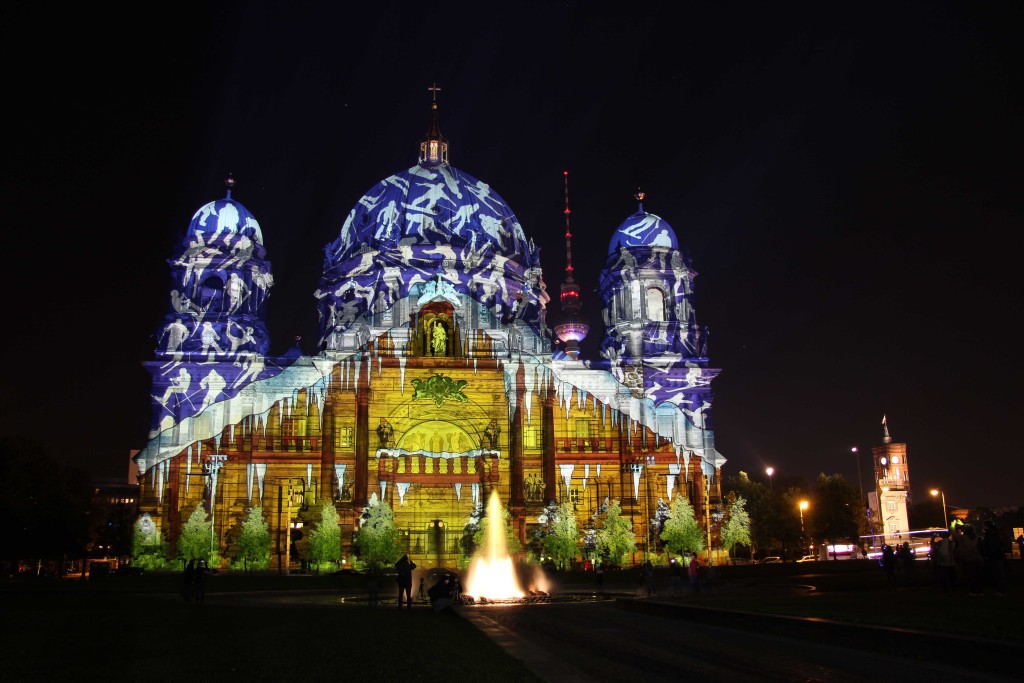 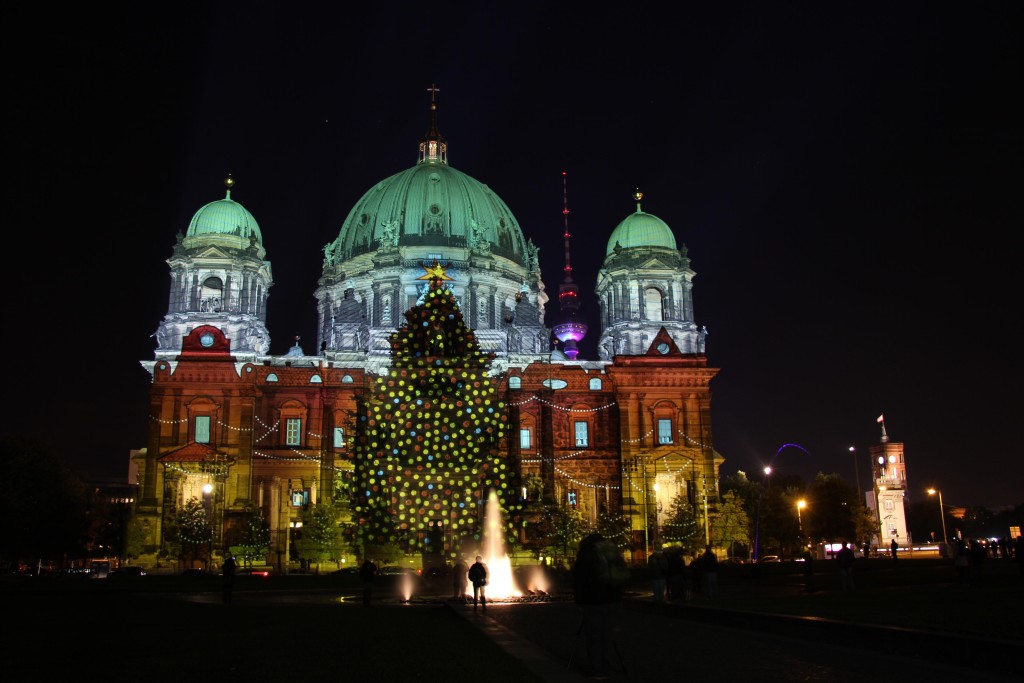 Brandenburger Tor (The Brandenburg Gate) is probably Berlin’s most internationally recognised landmark and a symbol for the city.

A video projection spectacularly transforms the gate into a busy apartment building. 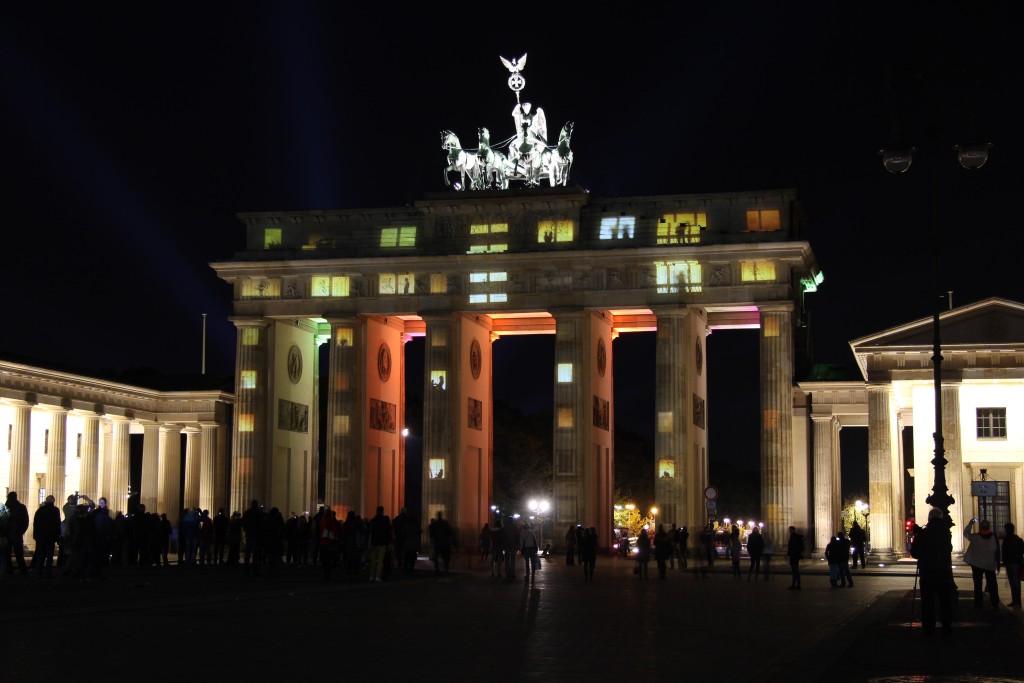 But a more simple light projection is also effective. 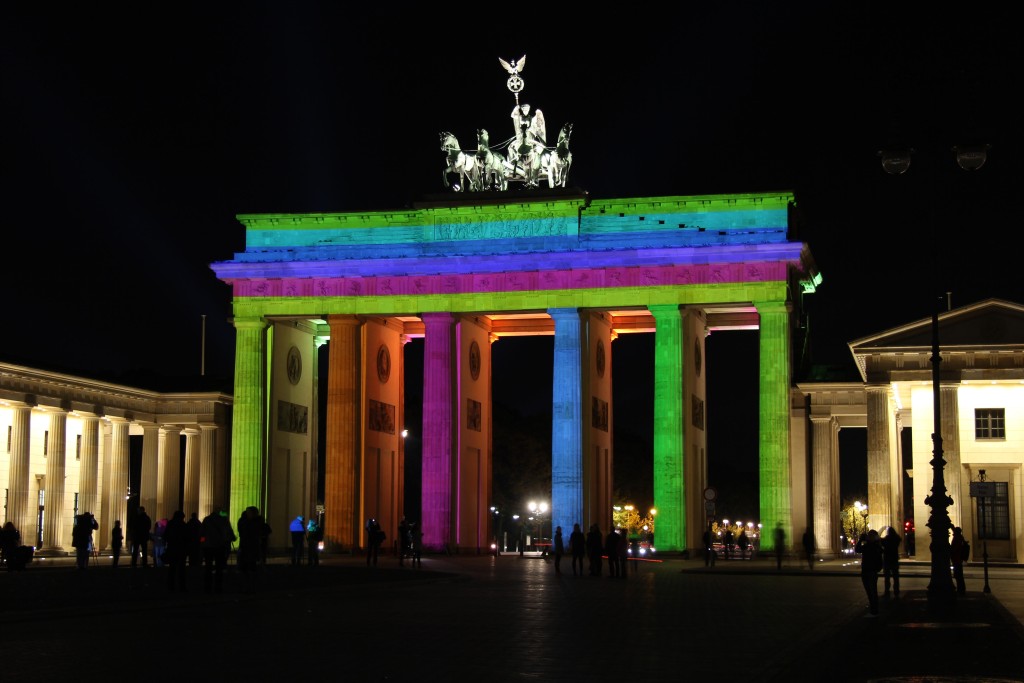 With light shows at 68 locations during the Berlin Festival of Lights 2012, I still have more to see and recommend that anyone in Berlin between now and 21 October 2012 finds time to take in the lights.

6 Responses to Berlin Festival of Lights 2012