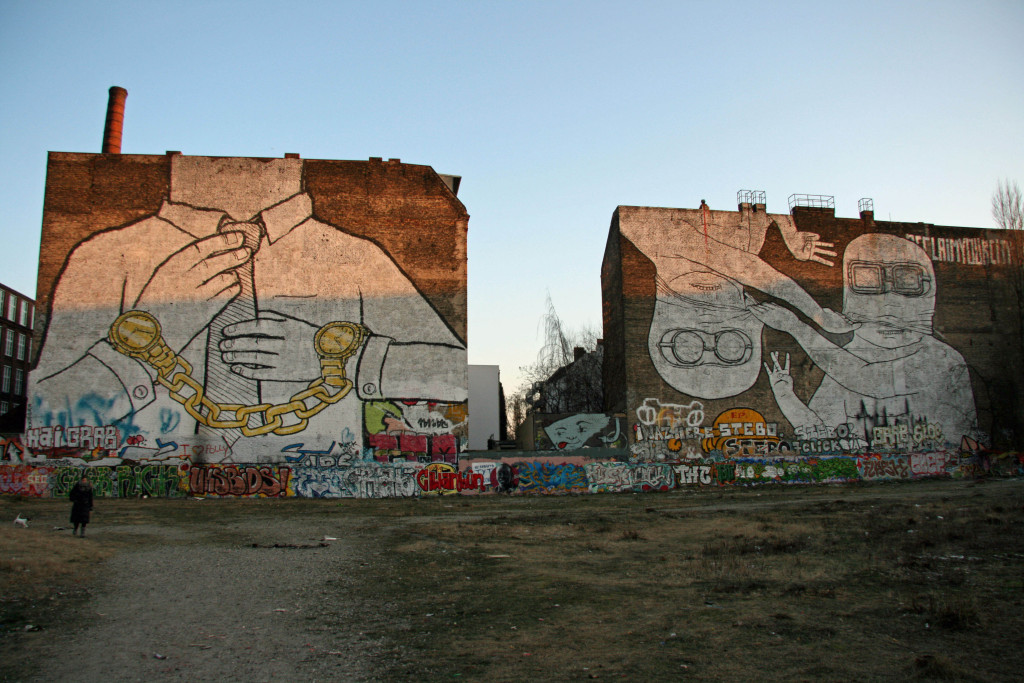 If you’ve been to Berlin, the chances are you’ve seen BLU’s work. His Street Art murals are both visually striking and on a massive scale.

These pieces on Cuvrystrasse in Kreuzberg are visible from the Oberbaumbrücke and impossible to miss if you’re taking a boat trip along this part of the Spree.

BLU hails from Bologna in Italy and has been honing his Street Art since 1999.  He has travelled extensively and his paintings have adorned walls in Central and South America and the West Bank as well as numerous locations across Europe.

All of the pieces I have seen in Berlin have been in Kreuzberg. 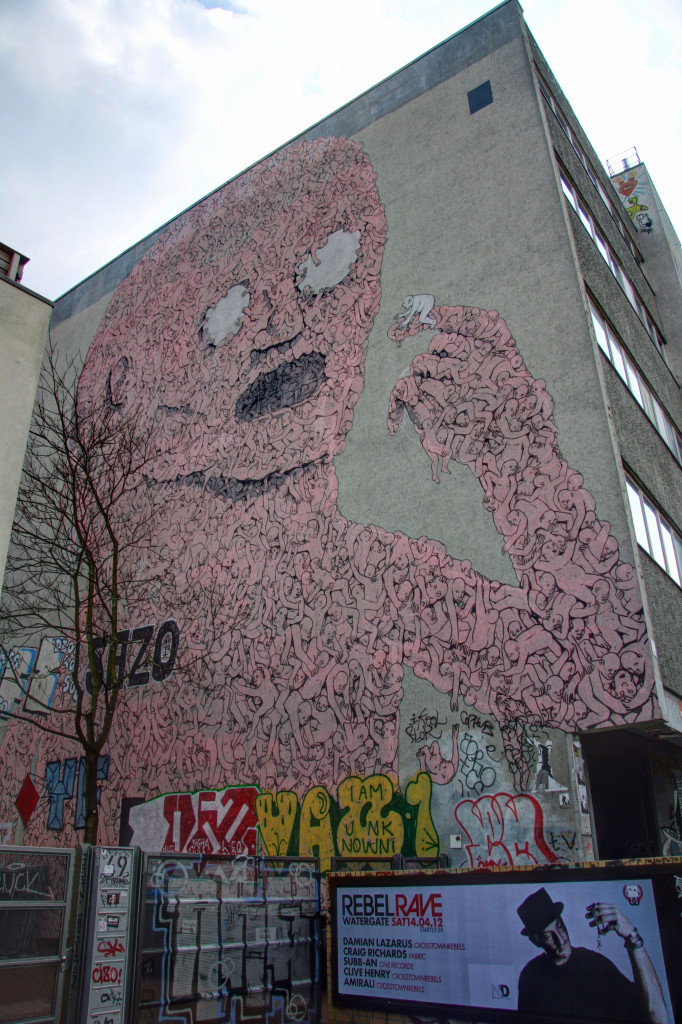 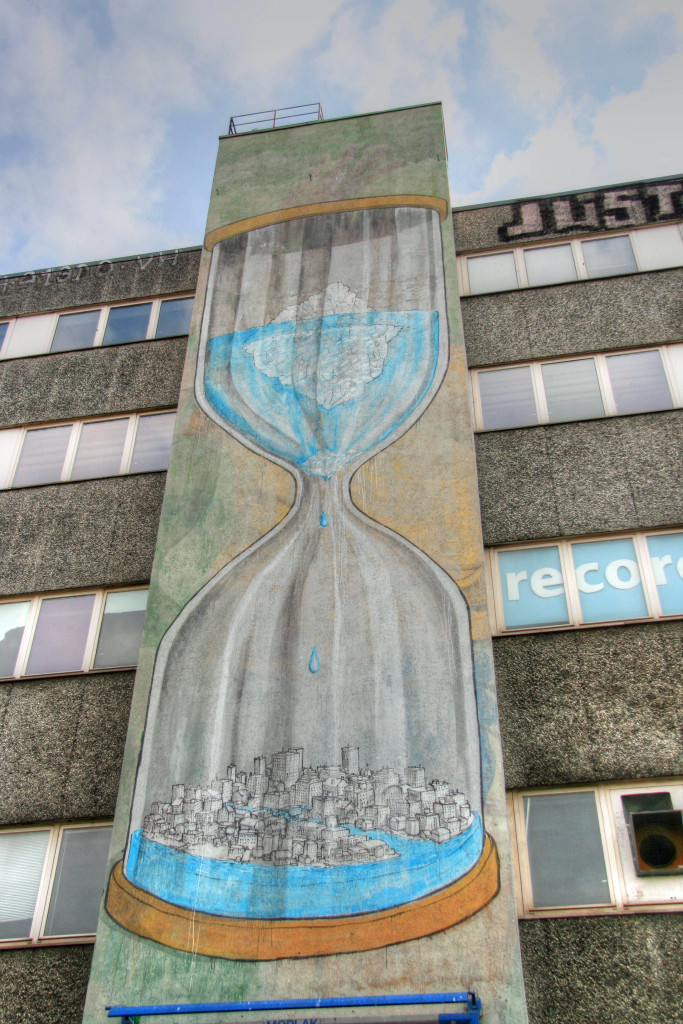 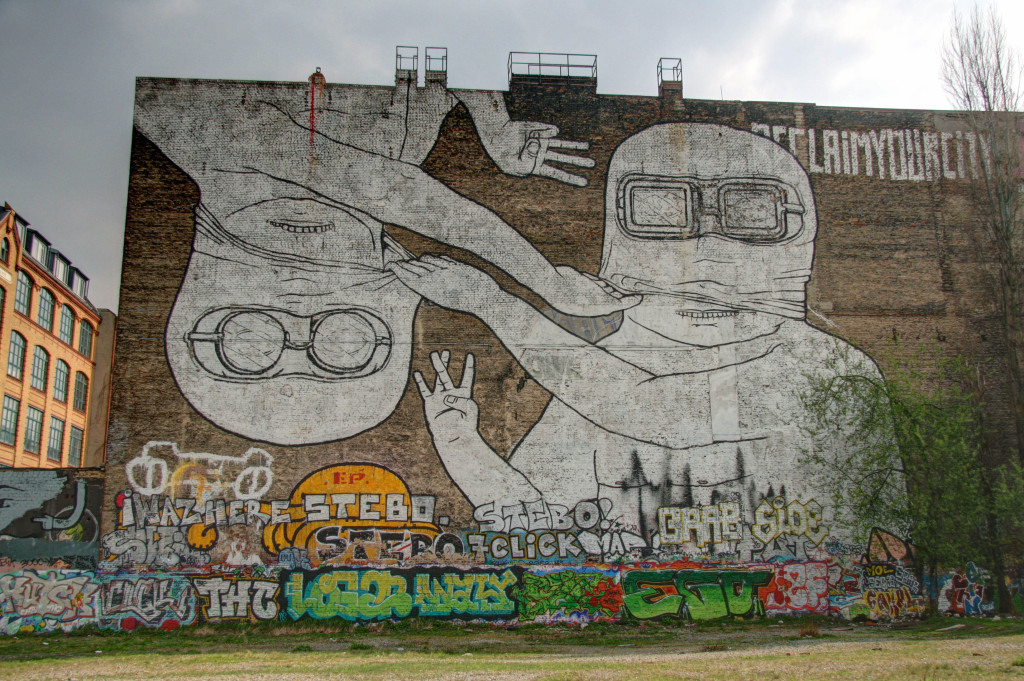 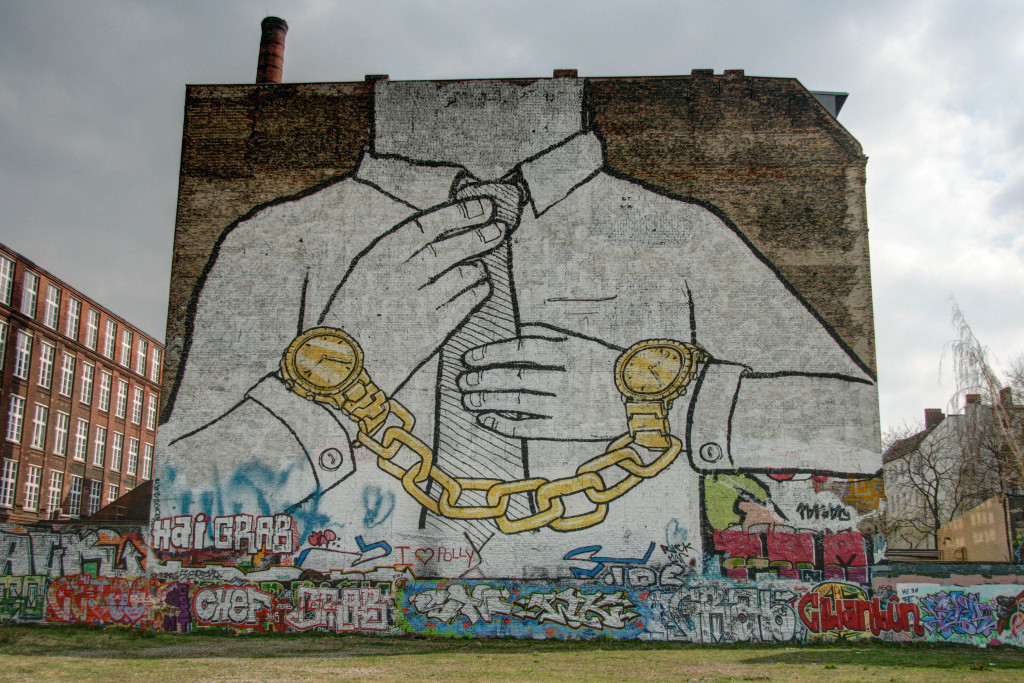 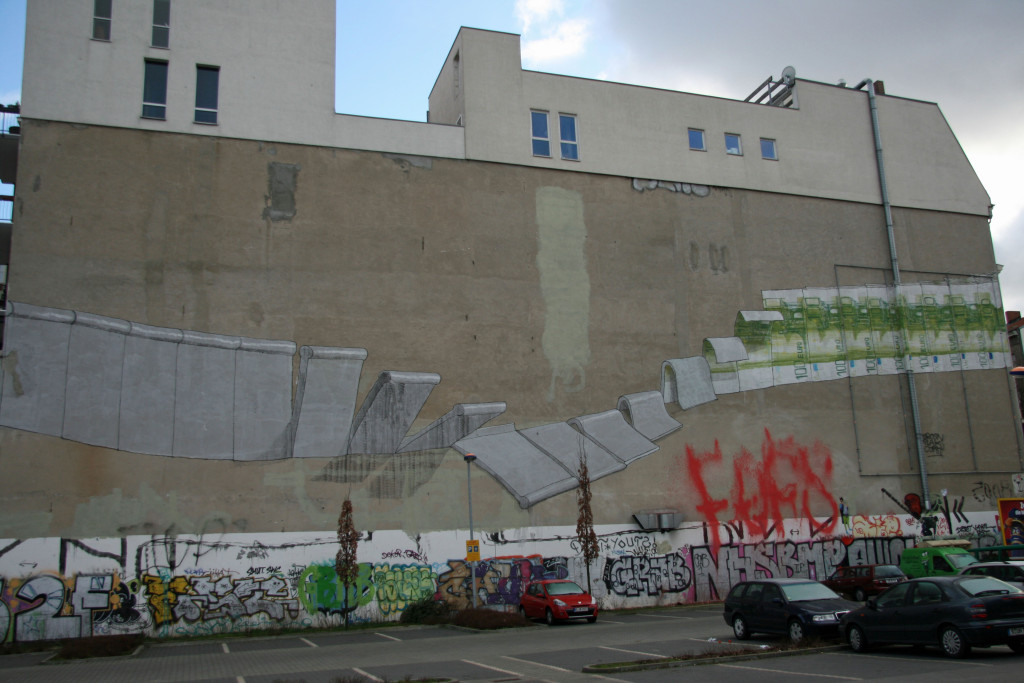 You can see more of BLU’s work on his website and Facebook page and you should check out this incredible video of the artist at work on one of the Cuvrystrasse pieces.

Update: Berlin is BLU and there’s nothing we can do

The two giant BLU murals on the Cuvrybrache in Berlin are no more.  They were painted over on the night of 11 December 2014.

Marc Honninger witnessed a pair of cherry pickers approaching the artwork and live tweeted the progress as they blacked out the two walls.

Initial reactions were along the lines of ‘here we go again’, ‘Berlin doesn’t know what’s good for it’, ‘the city shouldn’t do this’, ‘another example of gentrification ruining Berlin’.

It was a post from Dmitry Paranyushkin for Polysingularity appearing in my Facebook feed that alerted me to what was happening, in which he suggested that it was BLU himself who was responsible.

And it is not the city of Berlin doing that, neither it is the real estate developers who want to build a new residential complex at this empty spot.

In fact, it is being done by the people related to BLU — the artist who made this painting.

BLU made the following statement in a post on his blog the day after the murals were painted over:

In 2007 and 2008 I painted two walls at Cuvrystraße in Berlin (with the support of Lutz, Artitude and its volunteers).

In 2014, after witnessing the changes happening in the surrounding area during the last years,  we felt it was time to erase both walls.

The land in front of the murals had for some time been the site of a ramshackle hotchpotch of tents and cobbled together huts until a fire in September forced the residents to evacuate.  The police stepped in to stop them returning the next day and the area was fenced off in preparation for development.

It is clear from the reactions on Social Media that the BLU murals at the Cuvrybrache were a much-loved element of the fabric of Berlin.  Many people are upset that they have been taken away.

However, an online petition to have the artwork placed under Denkmalschutz (protected monument status) had gathered less than 8,000 signatures in the last 3 months.

It is also interesting to note that the replacement of another Berlin piece by BLU, the large hourglass on Oberbaumstrasße, with advertising, raised barely a whimper. 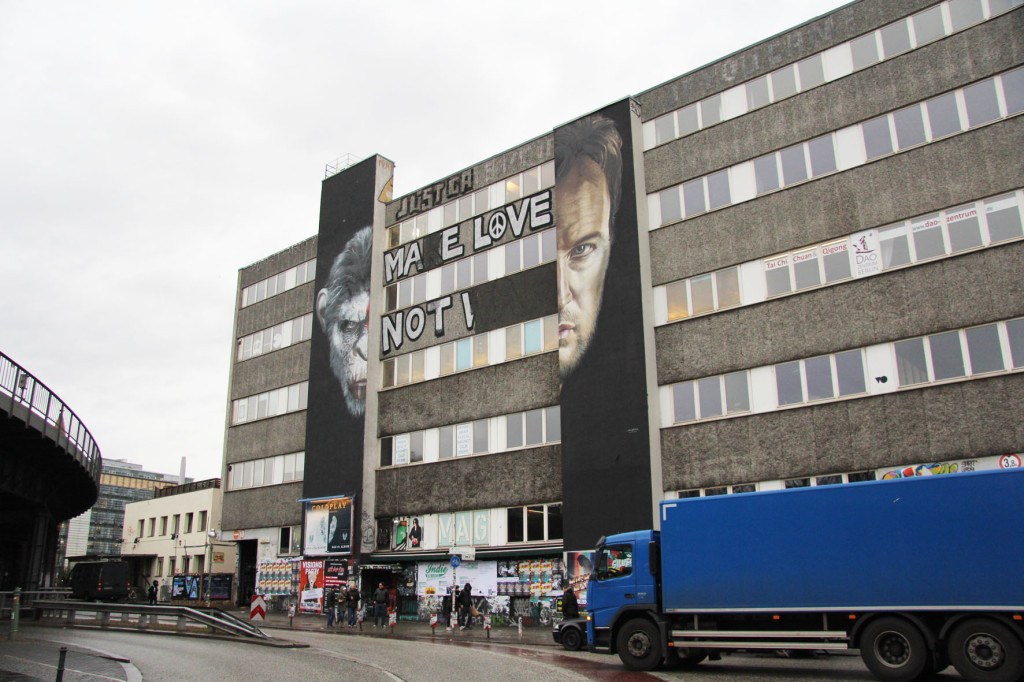 I’m disappointed that the pieces were painted over and staring up at two large black blocks on the morning after the removal was mildly depressing but street art is not meant to be permanent. 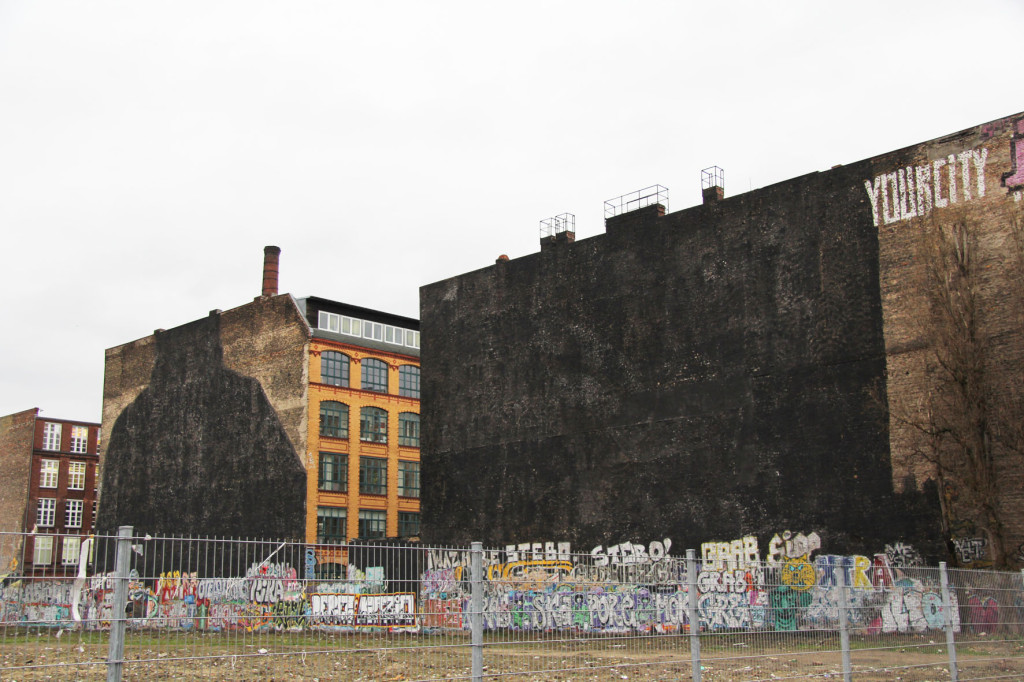 You could even argue that the new black walls are a form of street art, BLU’s commentary on what he feels is happening to this part of Berlin – an extension of his previous artworks about the rise of capitalism and consumerism in the reunited city.

14 Responses to BLU in Berlin – Past and Present