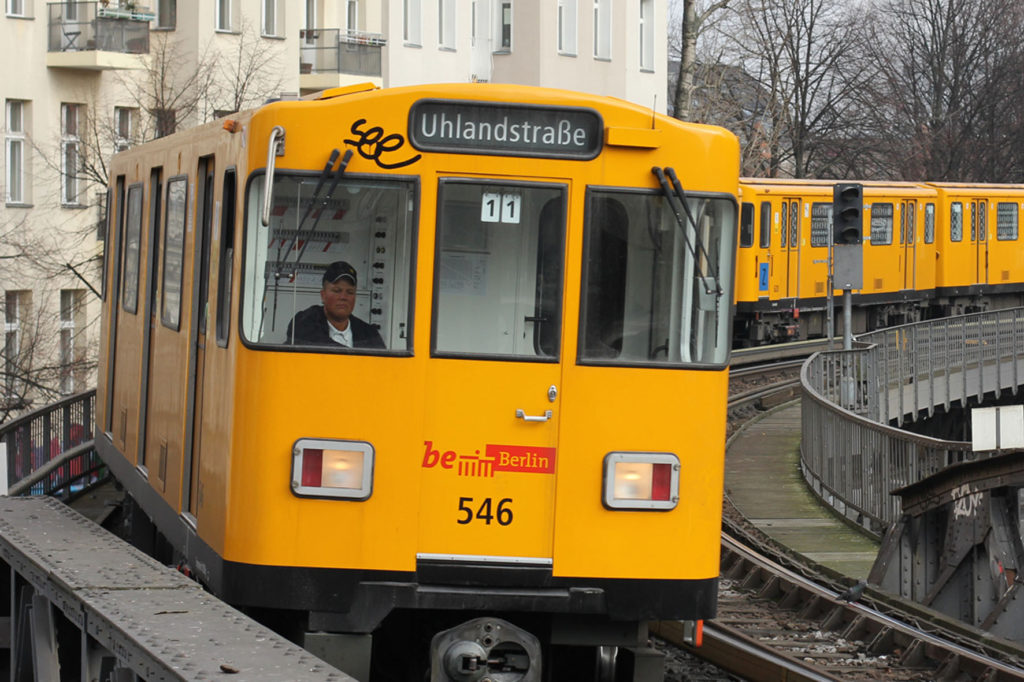 There are some Berlin rites of passage to be relished – opening a beer bottle with a lighter for the first time, for instance – and some not so rewarding experiences – like paying your first S-Bahn or BVG fine.

I had the misfortune to get caught without a ticket on the S-Bahn the other day.  I was on my way to Neukölln on the Ringbahn when a Kontrolletti, a Berlin public transport ticket inspector got on the train.

I’m not a Schwarzfahrer (the German term for some travelling without a ticket) so I wasn’t worried.  I opened my wallet to get my ticket out and…wait, what, where is it?  All of a sudden I was that guy.  I’ve seen other people do it often enough.  I checked all my pockets, I looked in every compartment of my wallet and repeated the process another couple of times to be sure.

I definitely didn’t have my ticket with me.

The ticket controller reached me and I explained (the following conversation took place in German).

“I don’t have a ticket. I’ve left my Monatskarte (monthly ticket) at home.”

“Which ticket do you have?”

“A 10-Uhr Monatskarte” (this is a monthly ticket that allows you to travel after 10am each day).

I then gave him my UK Driver’s Licence.

He then asked for my name and address, which he typed into his handheld machine and printed and gave me a slip of paper detailing my 60€ fine. 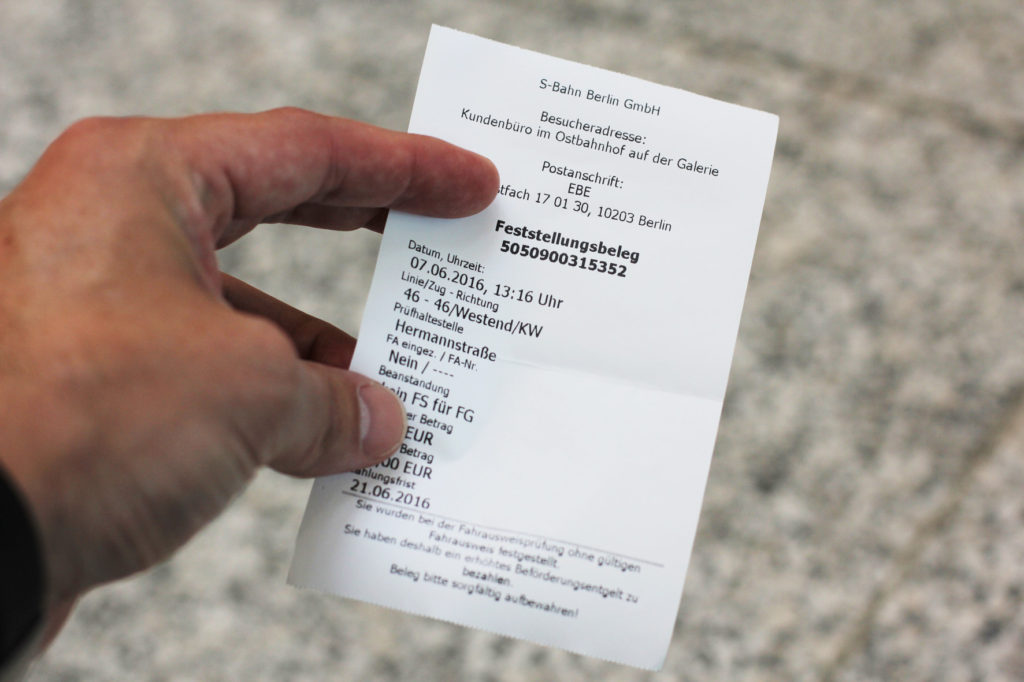 After he’d gone I went through the pocket and wallet checking routine a few more times.  People were giving me the look.  The ‘we all know you haven’t got a ticket and you’re just pretending to look for it’ look.

Naturally, I was very frustrated about getting a fine and sent a tweet about it.

Leaving my Monatskarte at home was an expensive mistake. Getting my 1st BVG fine was not the new Berlin experience I was hoping for today.

A few people then suggested that taking my Monatskarte with me when I went to pay the fine would mean that I only had to pay a reduced fine (thank you to everyone who offered advice / sent links to useful websites / offered sympathy).  I was sceptical about this as I had no way to prove that it was my ticket but at least I now knew that this was a possibility.

Paying My Fine at Ostbahnhof

The next day I went to Ostbahnhof to the S-Bahn and Deutsche Bahn Kundenbüro, (on the gallery level of the main lobby at the front of the station) and presented my penalty notice and explained that I had a Monatskarte but had left it at home. 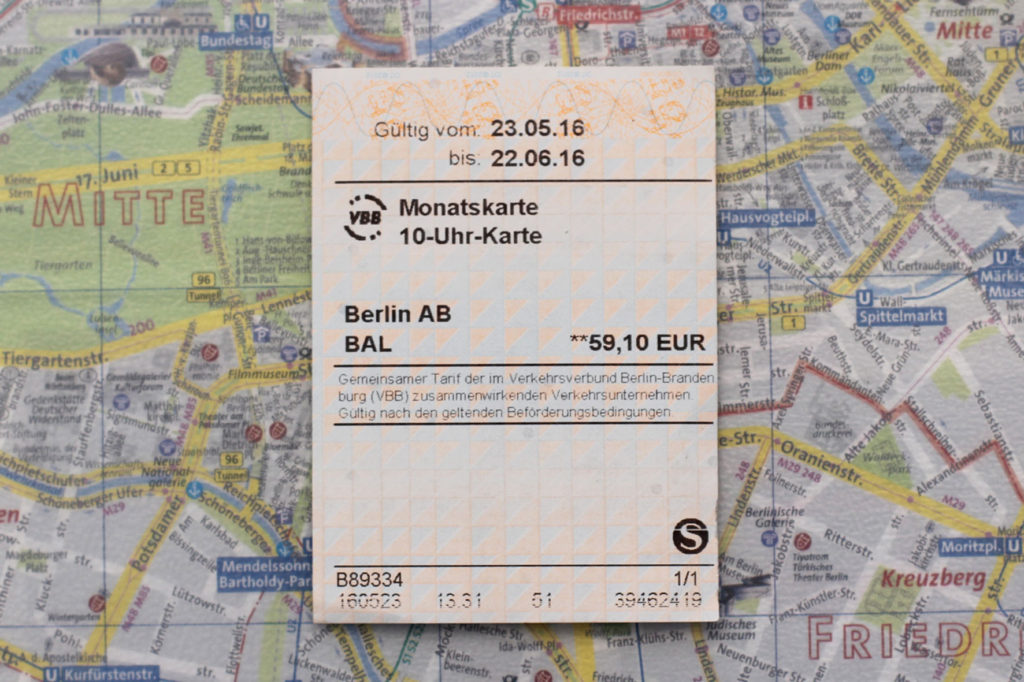 The 10-Uhr Monatskarte (monthly ticket) that I left at home

The staff member I spoke to was very pleasant about it but explained that the fine would not be reduced as my ticket was transferrable.  I then paid the 60€ fine and was given a receipt that I was told to keep for 6 months. 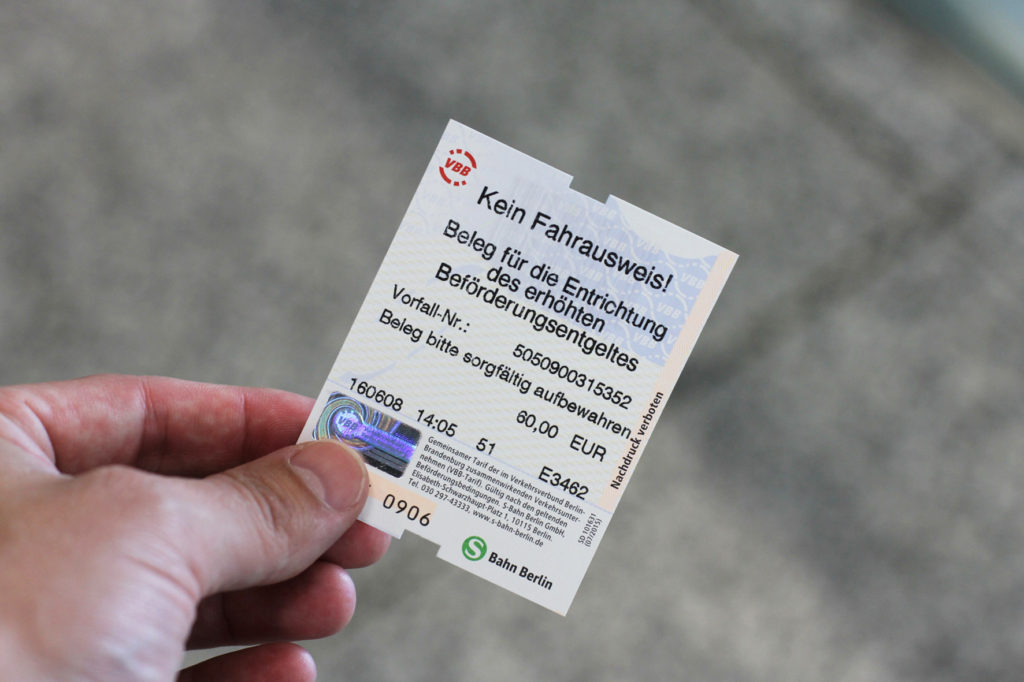 The whole process left me with a pretty bad taste in my mouth but I was mostly angry with myself.  Ironically, I don’t choose to travel without a ticket on principle and agree that fines need to be sizeable enough to discourage as many people as possible from trying to game the system.

I happen to think that public transport in Berlin is pretty damn good, though it’s not without its issues like the crazy number of repairs taking place simultaneously in July and August each year.  It’s also, in comparison to London, where I lived and worked in the past, relatively cheap.

That being said it was still extremely galling to have to cough up 60€ when I already had a ticket and had made the simple mistake of leaving it at home.

The Rules – Travelling Without a Valid Ticket on Berlin Public Transport

The next day I thought I’d look into the exact details of how the system works and googled (in English and in German): ‘BVG fines’, ‘S Bahn fines Berlin’, ‘travelling without ticket Berlin’, and other variations thereof.

I wasn’t having much joy so I took to twitter and e-mailed the accounts for the BVG’s ‘weil wir Dich lieben’ campaign and S Bahn Berlin.

The S Bahn Berlin account didn’t bother to reply and the BVG U-Bahn account that replied was about as useful as a chocolate teapot. 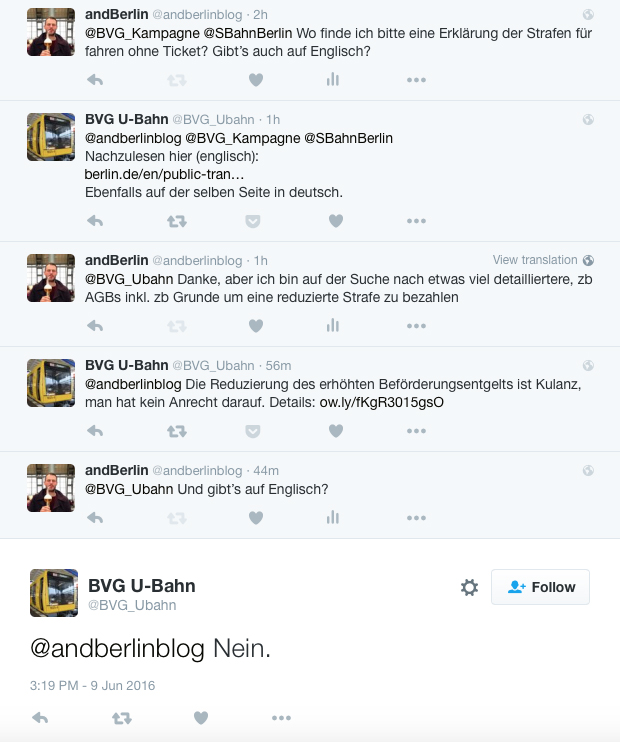 First they pointed me at an article on the Berlin.de website with just this short paragraph:

Anyone caught in public transportion (sic) without a valid ticket must pay a higher fare of 60 Euros. Even people who forgot to stamp their ticket must pay the fine.  Note: Ticket inspectors are dressed in plain clothes and will not make any exceptions for tourists.  Those who get caught have to show an ID, otherwise the police will be called.

This being far from the comprehensive details I was looking for, I tried again asking for Terms and Conditions and specifically asking about grounds for a reduction of the fine.

And this time got pointed to a page on the VBB (Verkehrsverbund Berlin-Brandenburg – the public transport priovider for Berlin and Brandenburg) website with the all their tariff related brochures.

Thankfully I had also asked Steffi to help with my research and using the keywords she gave me I managed to find the relevant clauses about Erhöhtes Beförderungsentgelt (Increased Travel Charge) in the Terms and Conditions of the VBB.

For non-German speakers the most important facts are:

Travelling With a Forged Ticket on Berlin Public Transport

Anyone who has been to Berlin has probably been offered ‘used tickets’ for reduced prices.  The sellers hang around the ticket machines waiting for tourists or locals looking to save a euro or two.  Unsurprisingly, some of these tickets are either fakes or used tickets that have had their stamps rubbed off.

Again I spent some time trawling the websites of the BVG, S-Bahn Berlin and the VBB and countless forums.  It is quite clear from what I read that the railway companies consider travelling with fake tickets much more serious than having no ticket at all.  The offence is in fact treated as fraud and it is the courts that decide the penalties rather than the railway companies.  The best explanation I could find was a press release from the S-Bahn Berlin (again only in German so I have translated it as best I can).

There is no mercy if passengers submit manipulated or forged tickets, as is the case if they are caught for a third time.  In this case, the transport companies bring charges. S-Bahn Berlin and BVG insistently point out once again that tickets may only be purchased at authorised sales points and ticket machines.  Those who buy from hawkers must expect counterfeiting.  Therefore, in the case of inspection: ignorance is no excuse!

The first thing I learned was that it was almost impossible to find any information about the S-Bahn and BVG fines for travelling without a valid ticket in English and not easy in German.

My advice when it comes to travelling on Berlin public transport: never buy ‘used tickets’ – a fake could cost you dearly – and always check you have your ticket before leaving the house – getting caught without a ticket even if it’s a genuine mistake will cost you just as much as not buying a ticket at all.  Schwarzfahren doesn’t really make sense at all but that won’t stop plenty of people from trying their luck.