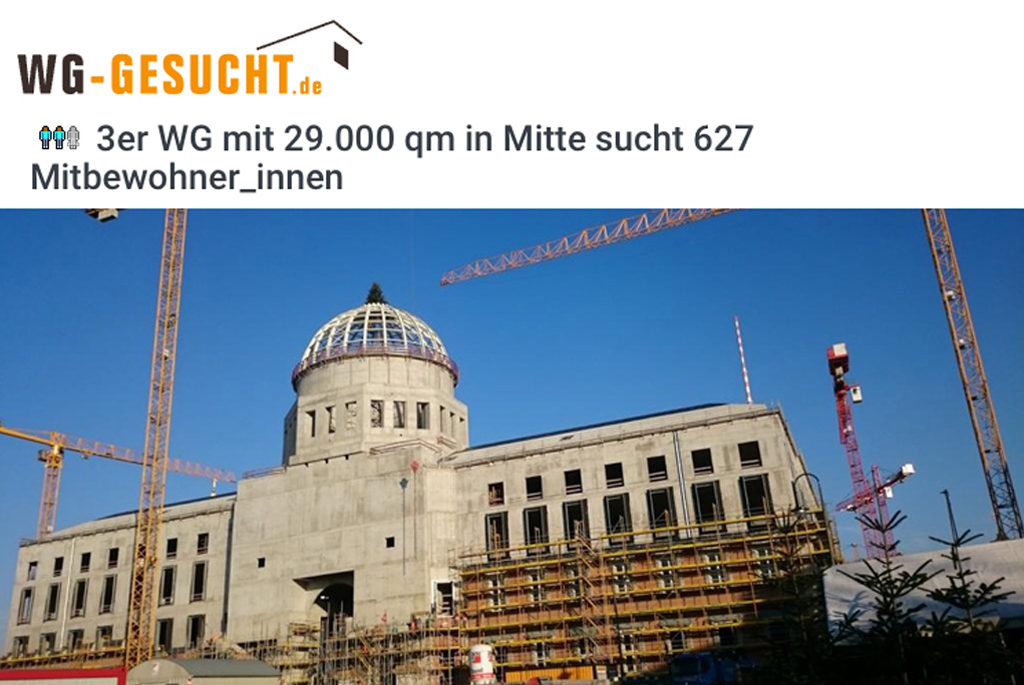 Are you moving to Berlin or currently on the lookout for new housemates?  If so, you may want to check out this tongue in cheek advert for a flat share that appeared on wg-gesucht last week.  The advertisers want 627 extra people to share the bills at the new Berlin City Palace (Berliner Stadtschloss), in what will undoubtedly be Berlin’s largest and most unique WG.

WGs (WG is shorthand for Wohngemeinschaft), i.e. flat shares or shared houses, are common in Berlin where the majority of residents rent rather than own property. Berliners often advertise for prospective housemates on the wg-gesuscht website.

The advert explains that three housemates will be moving to a chic new shared house within walking distance of the Humboldt University that is currently under construction.  It goes on to explain…

…we have now decided that 29,000 square metres is too much for just three people and we are now looking for 627 housemates so that in the end each person has about 46 square metres at their disposal.

They go on to clarify that although there is still some considerable work to be done to finish and furnish the interior, Federal funding of 558 million Euros and a further 32 million from the state of Berlin mean that prospective housemates won’t need to ‘stick every tile’.

There are currently three ‘tenants’, German speakers, aged between 33 and 50.  Applicants should be men or women between 18 and 60 years old and non-smokers – non-Germans would be welcome.  The parking situation is described as good and there is access to public transport within a 3-minute walk.  The monthly rent is 523€, including bills.

The Berlin City Palace is scheduled for completion in 2019 and is a reconstruction of the original Stadtschloss, home to countless Electors of Brandenburg and Emperors of Germany.  The original fell foul to the anti-Imperial feelings of the Communist regime of the DDR in 1950 and was replaced by the Palast der Republik, which itself was demolished by the government of the new Germany following reunification.

Not everyone is keen on turning back the clock and many see the expense of reconstructing the palace in the centre of the city as wholly unnecessary and extravagant.  The advertisement is therefore an amusing way to criticise the project from a group who would like to see more investment in social housing in Berlin.

Those who sympathise with this view and could see themselves living in the Berlin City Palace shared house (Berliner Stadschloss WG) are invited for a group viewing.  As a result of ongoing construction, the viewing is restricted to a tour of the outside of the building but interested parties should meet in front of the European School of Management & Technolog at Schlossplatz 5 at 19:00 – see Facebook for more details (auf Deutsch).