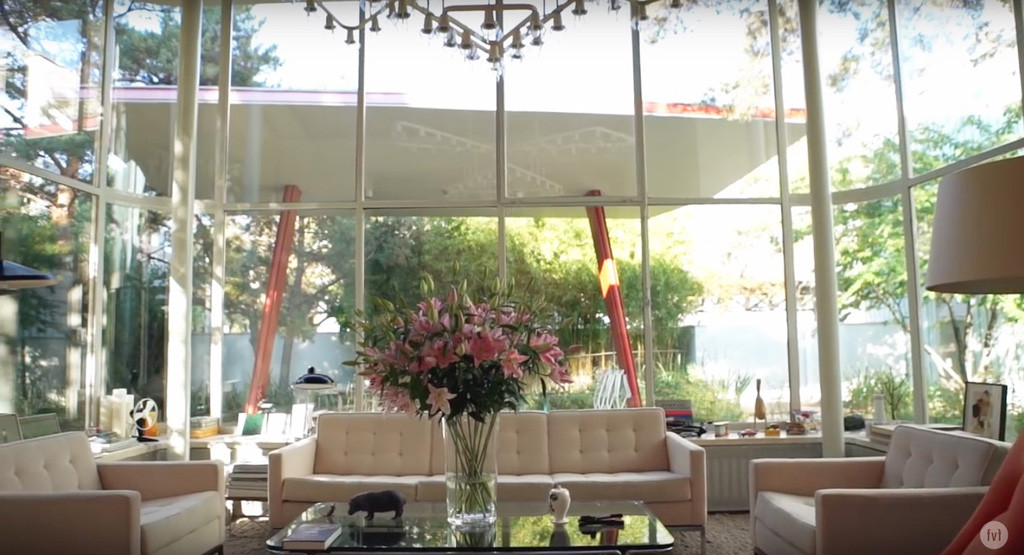 The converted gas station that Berlin gallerist and art collector Juerg Judin calls home is the kind of property most of us can only dream of.

I bought it in 2005, but the first time I saw it was in 1992.  It had already been on the market for seven years, unused.  A ‘For Sale’ sign with a phone number hung in the window.  I photographed the place almost every time I was in Berlin, documenting its slow decay.  Here was this somewhat sad useless construction in a perfect central location – it fascinated me and somehow called to me: do something with me!

Judin bought Die Tankstelle (the petrol station) and the corner plot of land on which it stands in the shadow of the elevated tracks of the U2 on Bülowstraße in 2005 for 500,000 Euros.  He spent the next three years sympathetically converting the property.  Tiles were taken from inside the building to replace damaged ones outside, the curved windows were changed for modern equivalents, and the folding garage doors were retained and painted Shell red.

The living room is the old shop of the converted gas station, the heart of the home is a spectacular kitchen in the former workshop and an additional two-storey new build houses a library and exhibition space.

Judin didn’t achieve all this alone of course.  He employed Thomas Brakel of BFS Design as architect and Guido Hager is responsible for realising his vision for a garden oasis in the city.

At first the conversion was intended to serve as a studio for artists on a residency program but as the project progressed, Judin decided that he would move in temporarily on completion.  Seven years later, he has developed a strong attachment to the building and has been unable to hand it over yet.

To get more insight into the conversion and to drool over beautiful photographs, check out the full interview on Freunden von Freunden and these earlier articles from Trendland and the New York Times.

Hidden as it is behind a two-metre wall I have never noticed the 1950s converted gas station home of Juerg Judin as I walked along Bülowstraße or travelled along the U2 before but next time I’m in the area, I’ll be looking out for it.