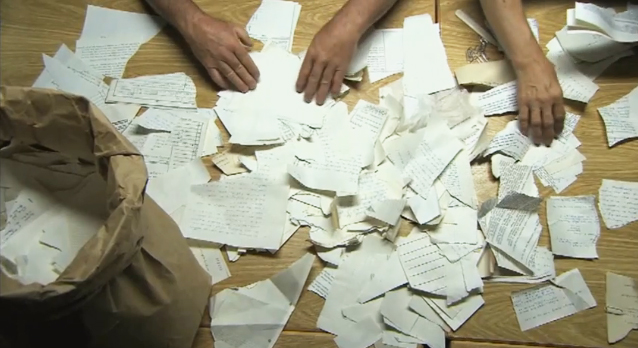 Virtual Reconstruction of Ripped Stasi Files‬ is a documentary from Fraunhofer IPK, the company commissioned by the BStU (Bundesbeauftragten für die Unterlagen des Staatssicherheitsdienstes der ehemaligen Deutschen Demokratischen Republik or Federal Commissioner for the Records of the State Security Service of the former German Democratic Republic) to develop the “e-Puzzler”, a tool for the virtual reconstruction of thousands of documents destroyed by the Stasi in the lead up to the fall of the Berlin wall.

I was 14 year old when the Berlin wall fell and when I think back to that time two distinct pictures form in my mind: joyful Berliners dancing on the wall on the night it ‘fell’, 9 November 1989; and a more serious crowd storming the Stasi headquarters on 15 January 1990.

What they found when they entered the building were thousands of sacks of torn documents, many of which had previously been part of the detailed files the Ministry of State Security kept on the people of East Germany.

For years, the Stasi had inspired fear in the ordinary citizens of the DDR but as they rebelled and protests intensified the tables turned and shredding machines ran day and night in an attempt to destroy vital evidence of the ministry’s wrongdoings.

When the machines burnt out agents started ripping up the files by hand.

In the aftermath of the fall of the wall, reconstructing those files and allowing citizens access to the information that had been gathered about them became a vital part of the reunification process.

First, papers were examined and repaired by hand but it was clear that this process would take decades and in an attempt to speed up the task automated solutions were sought.

The development of Fraunhofer IPK’s “e-Puzzler” is now in the testing phase having proved viable in the pilot period and the company is looking at options to further speed up the virtual reconstruction of the files of the Stasi.