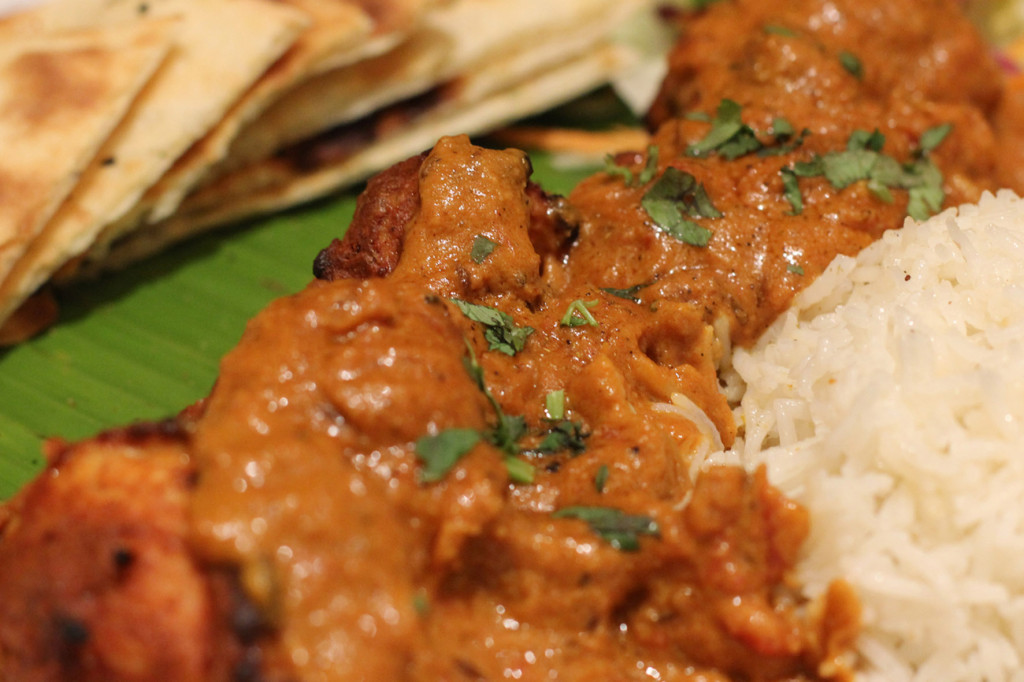 Spicy, tasty and authentic aren’t words often associated with Indian food in Berlin.  Finding a genuinely decent curry in the German capital isn’t easy let alone an exceptional one so after my first meal at Agni in Moabit I walked out with a ‘curry high’ that lasted for days.

It is unlikely that I would have found Agni without a recommendation – it is mentioned in the ‘Berlin’s Best Curry Houses’ post on Slow Travel Berlin – as it’s a nondescript looking storefront on a less than glamorous Moabit street.

The heady aroma of spices coming from the kitchen may have clouded my mind because, despite having read about it in advance, I was still a little shocked at how small the restaurant is. Four tables for 2 face the open kitchen with a further table under the counter.  With seating for 10 people in total, it’s safe to say that this isn’t a place to take a large group, though meals are available to take away.

My first experience at Agni was overwhelmingly positive.  Steffi, Bine and I were all drawn to the Tandoor (Variation 2) section of the menu – dishes described as ‘laid in traditional marinades and cooked in the clay oven – served on a banana leaf with rice, bread and a sauce’. 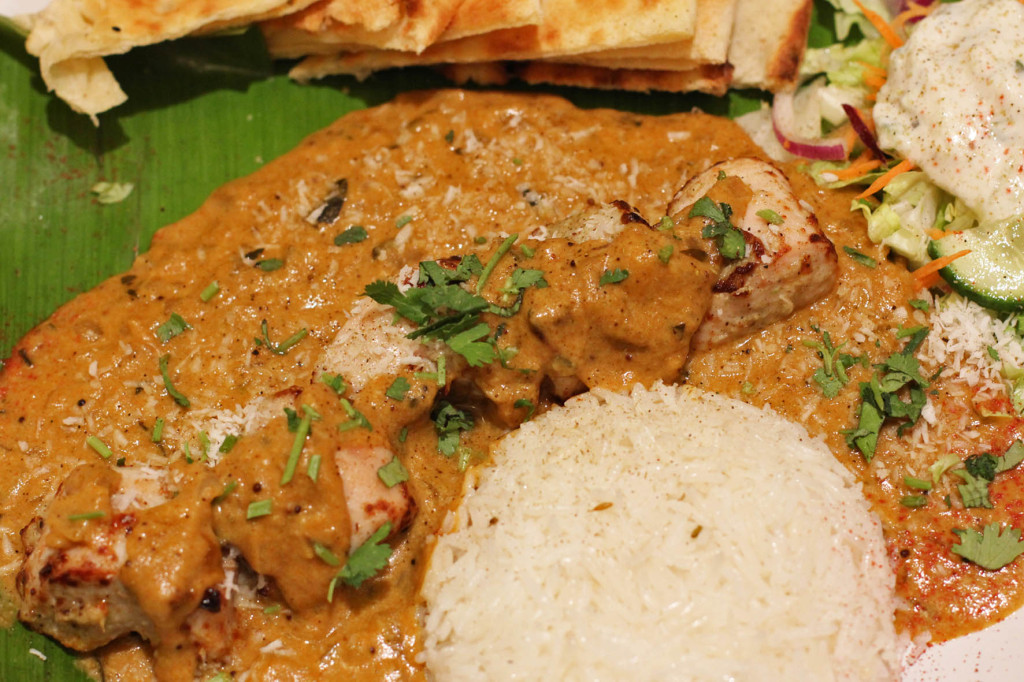 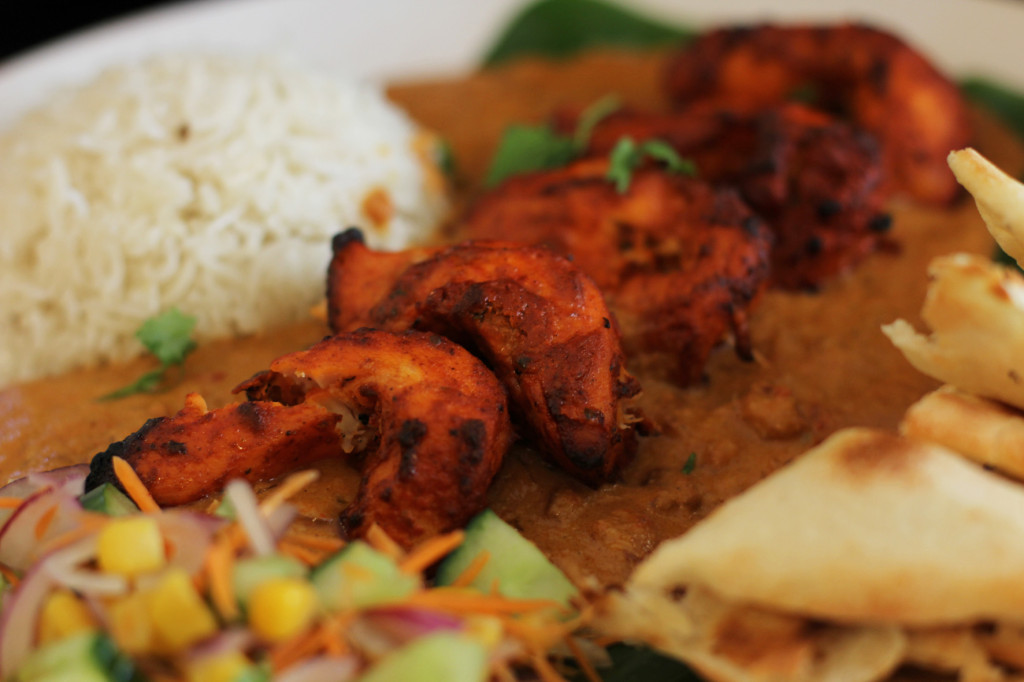 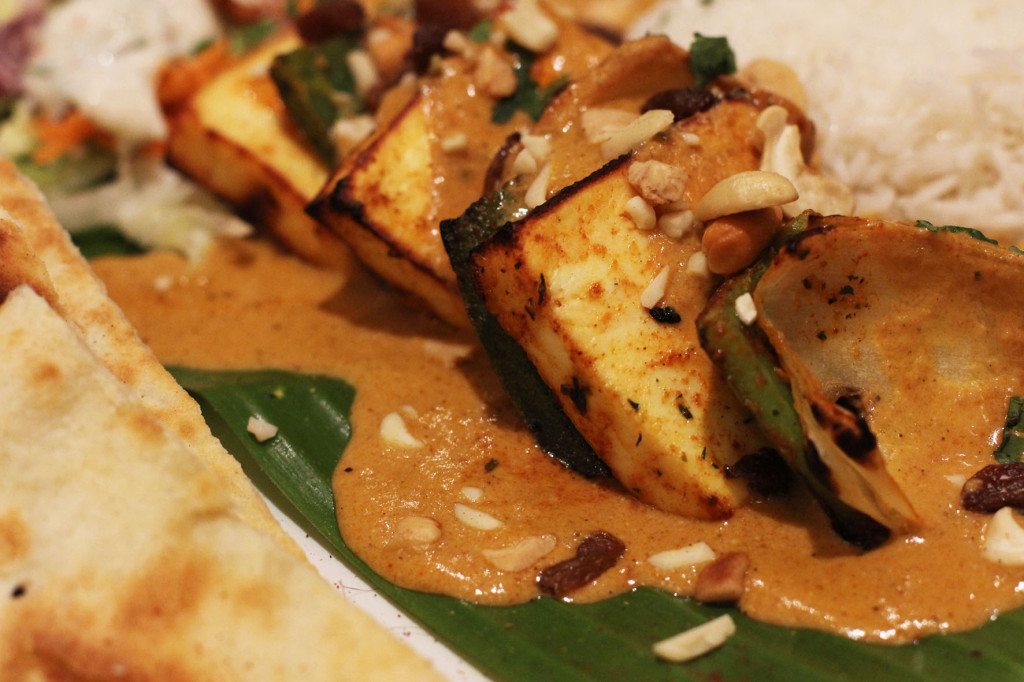 Having chosen my curry because of the Madras sauce (described on the menu as ‘scharf’) I was a little surprised to find that Steffi’s was spicier (on reflection this is on account of the relative spiciness of the marinades).

As we left the restaurant, Steffi voiced her approval in her usual way ‘Das war lecker’ (that was tasty), she said, followed shortly by ‘Ich bin so voll’ (I’m so full).  Bine and I agreed.

On my latest visit I decided to try one of the Thalis, a selection of dishes served with rice, bread and salad – a kind of Indian tapas if you like – a good way to work my way through the menu in as few visits as possible.

I had the Amish Thali (83), which allowed me to choose three different Lamb and Chicken specialities (this was marked as Niramish Thali on the menu in the restaurant but I believe that would be a vegetarian dish). 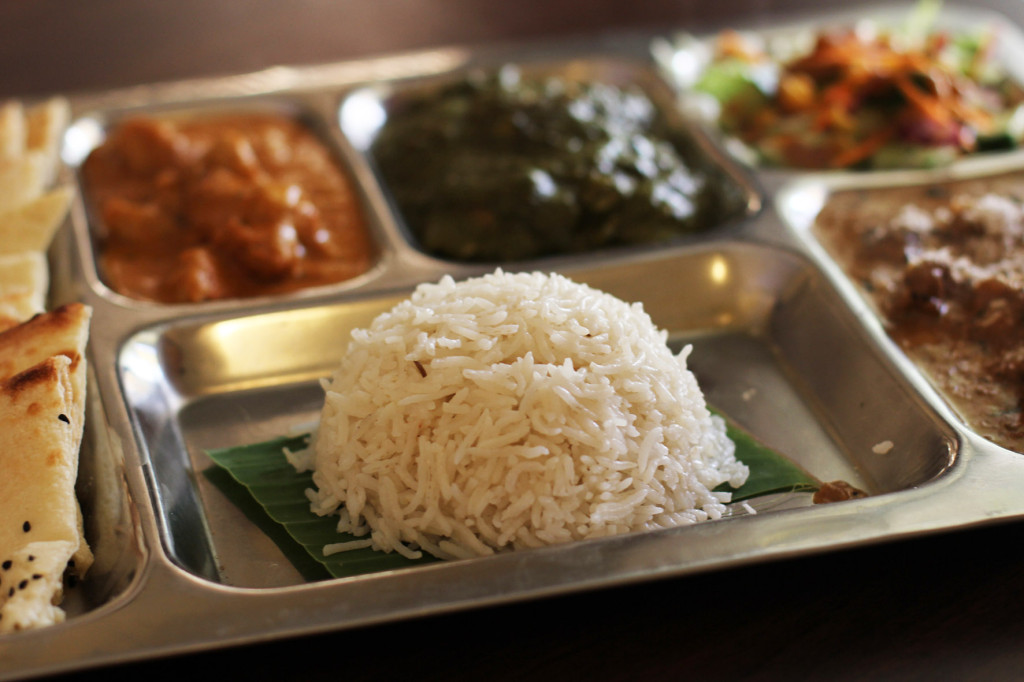 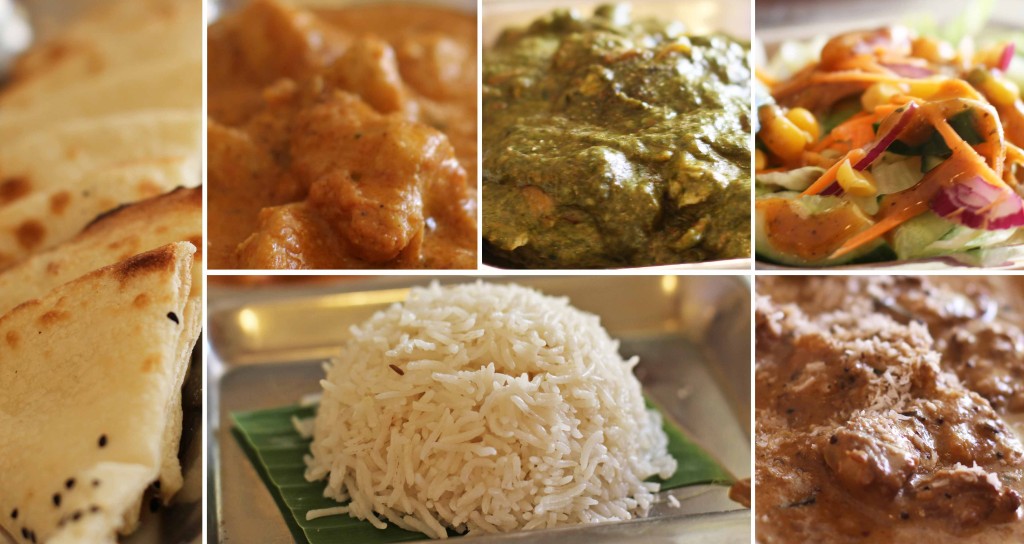 The Thali came on a silver tray and everything was absolutely delicious but the Chennai Gosht was the standout dish.

Over the course of five visits there have been some slight differences in the taste and look of some of the dishes I have had that suggests they are cooked on instinct rather than following a strict recipe.  However, the food has always been of a consistently high quality and has never failed to deliver when it comes to flavour.  On each of those visits a small complementary starter has come with the drinks. 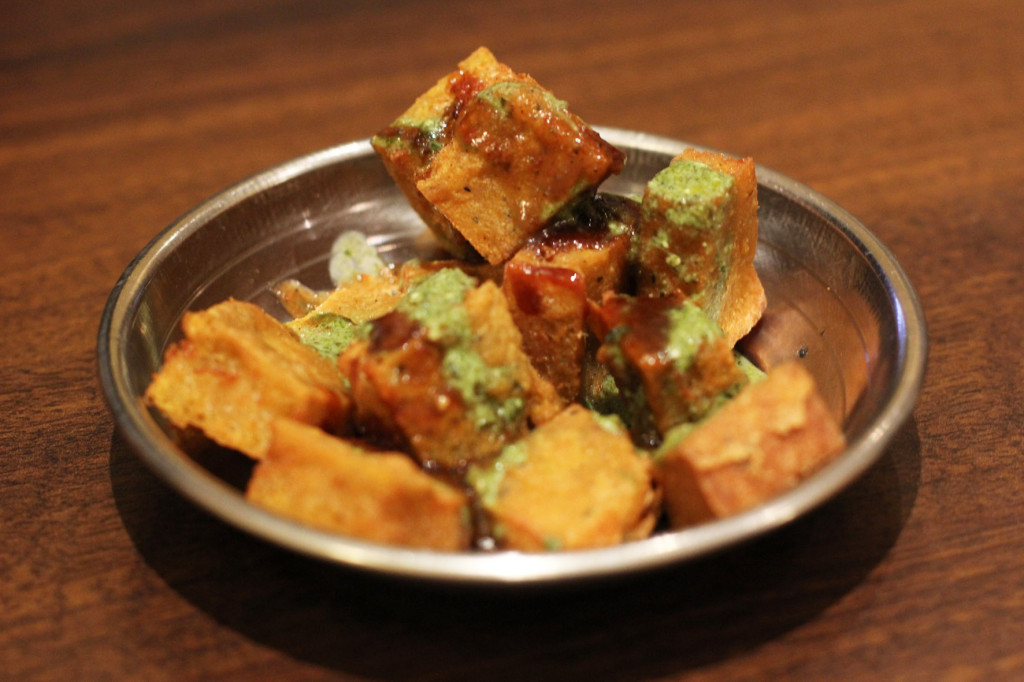 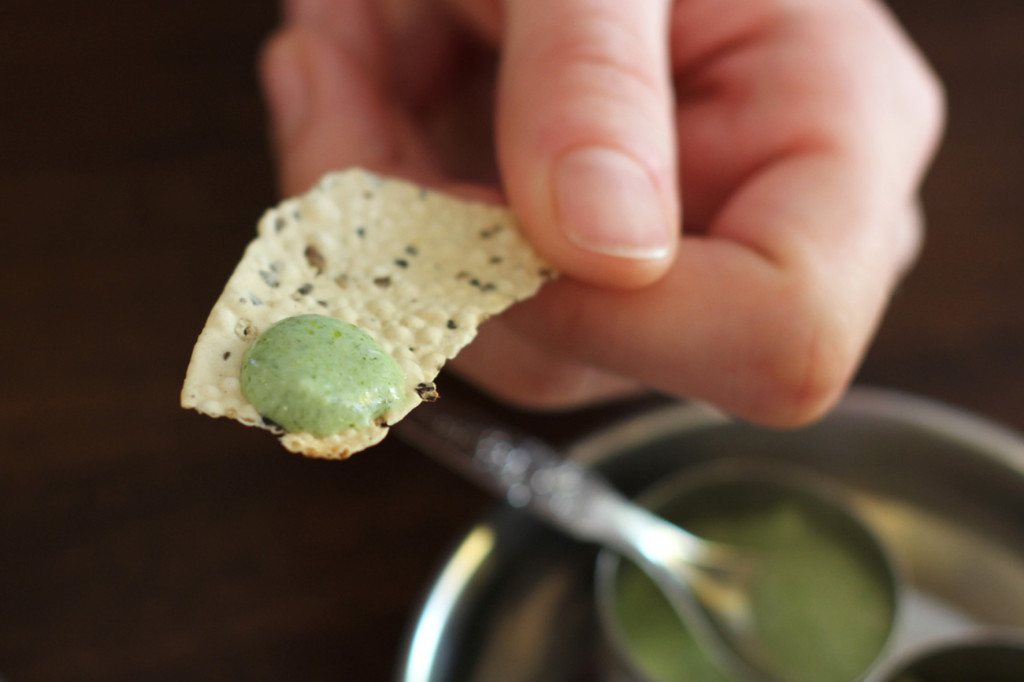 I will be very pleasantly surprised if this isn’t the best curry in Berlin – a visiting friend, who spent his university years in Bradford, the curry capital of England, gave Agni his nod of approval and when it comes to Indian food in Berlin it won’t get much better than that.