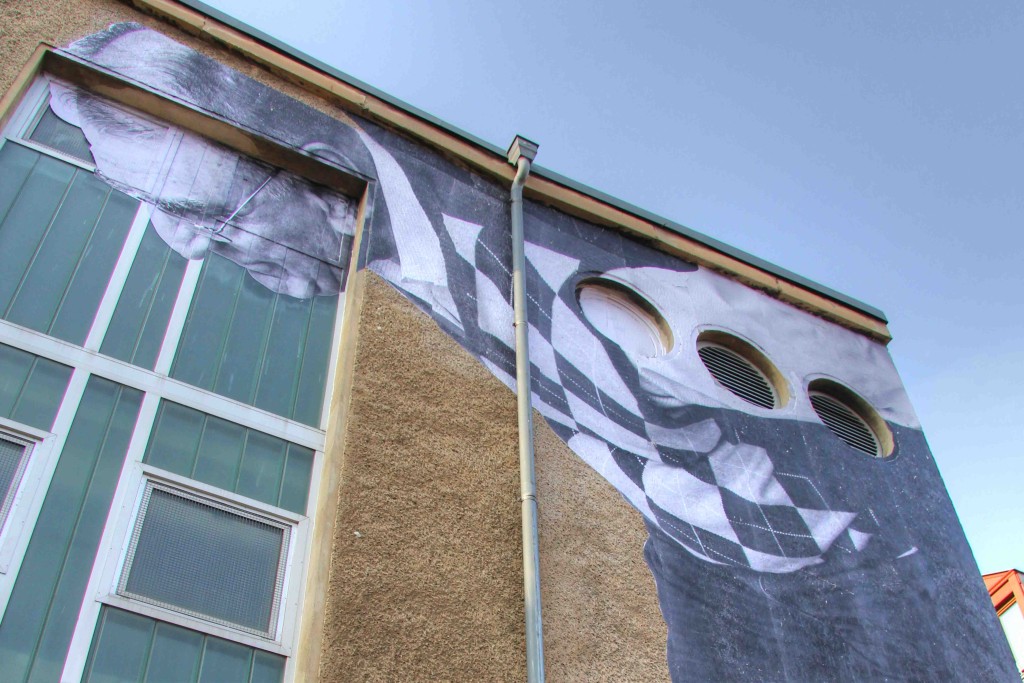 French Street Artist JR began his Wrinkles of the City project in Cartegna in 2008 – since then, he has continued the theme in Shanghai, Los Angeles and Havana and this month, Berlin. 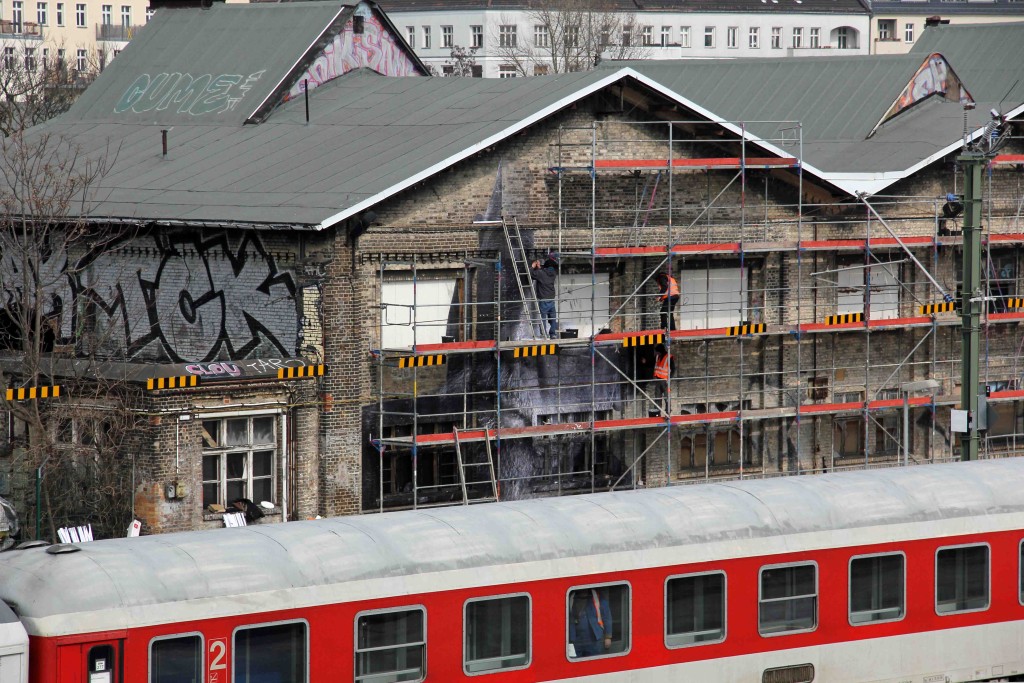 As luck would have it, I spotted JR and his crew at work at Warschauer Strasse two weeks ago today.  Having recognised his work, I followed him on Twitter and Instagram, where he posted shots of work in progress and some of the completed artworks. 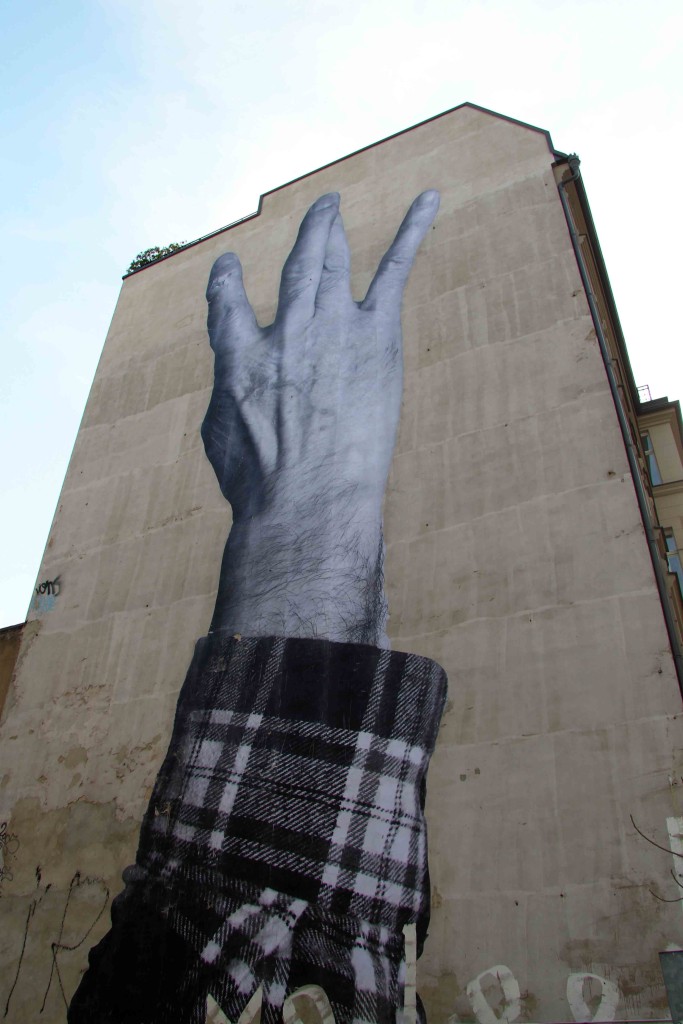 The concept behind Wrinkles of the City is to take photos of the old people living in the city in which the art will be displayed as large-scale paste-ups on walls that have their own texture so that the architectural wrinkles enhance the physical wrinkles.

JR has left his mark on between 15 and 20 walls in Berlin where suitable buildings are plentiful. 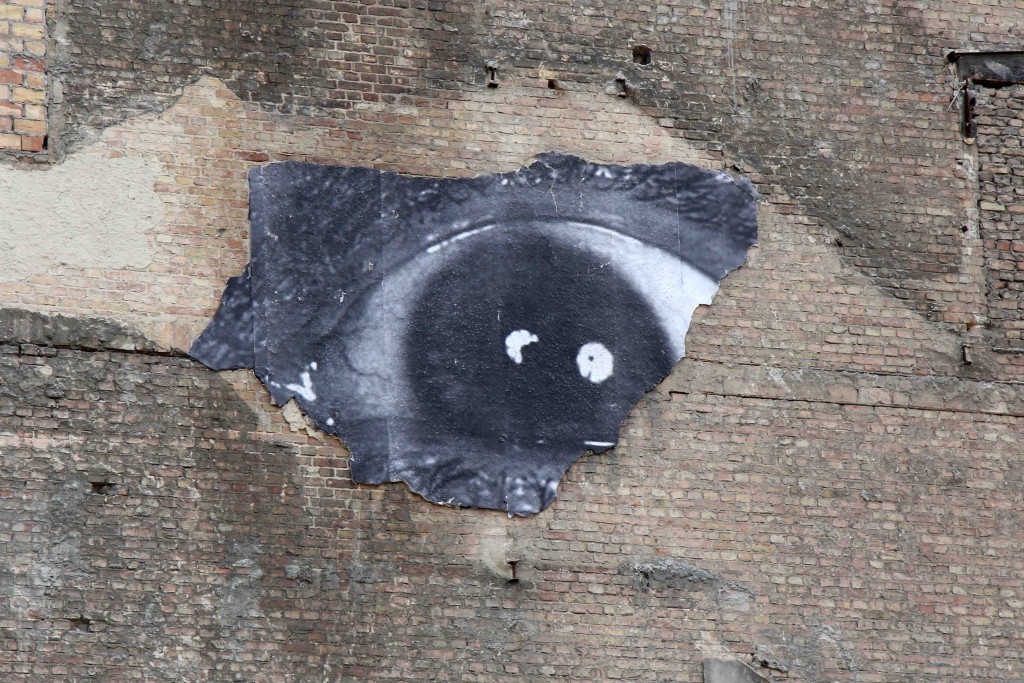 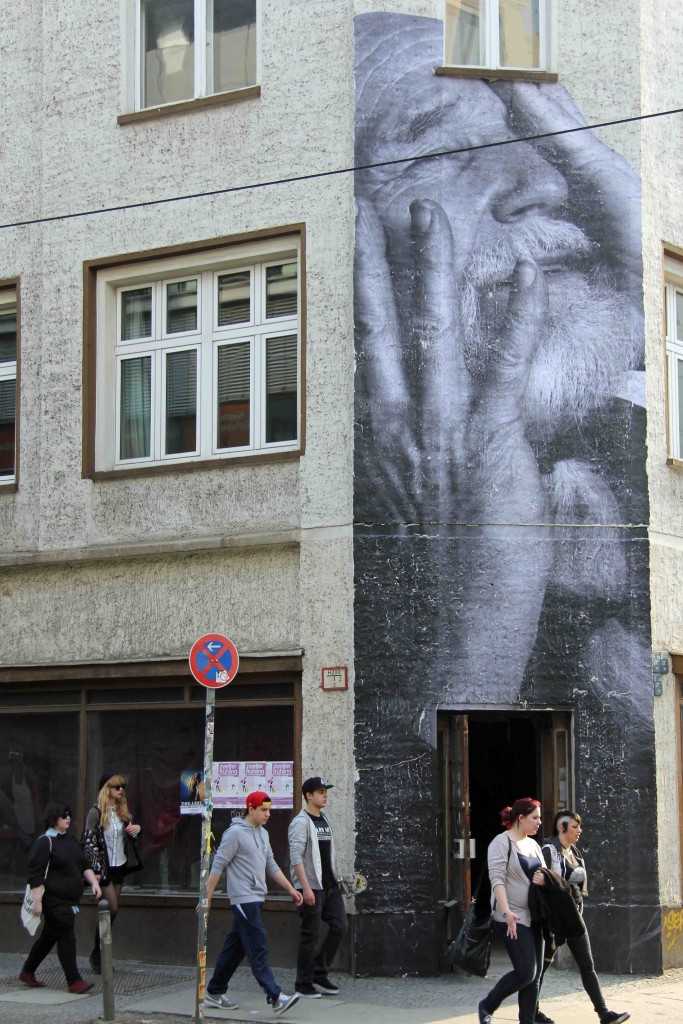 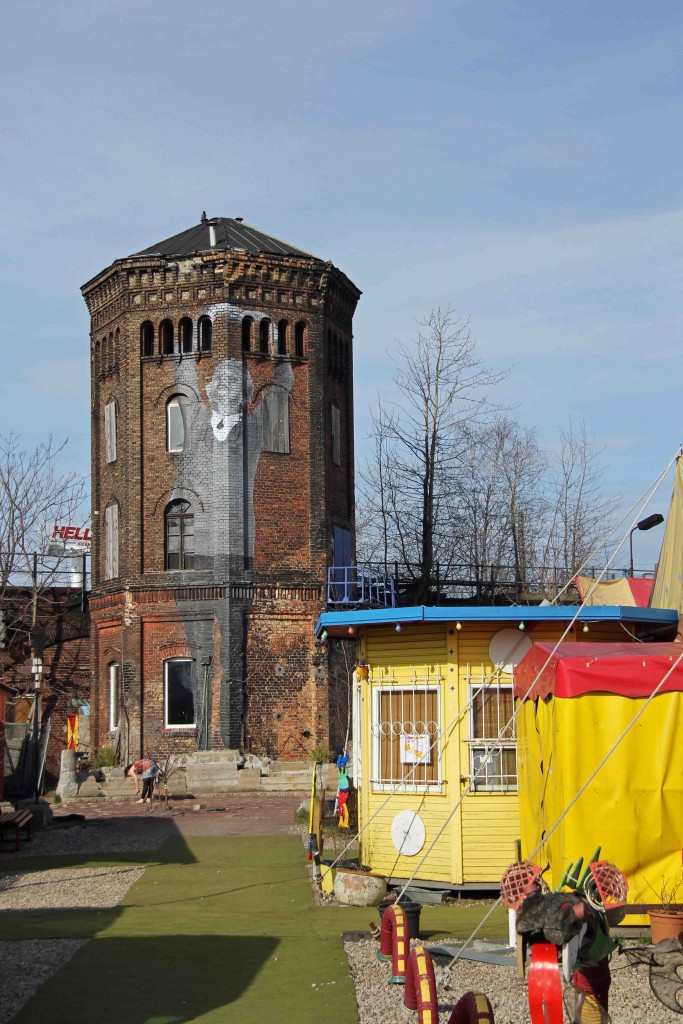 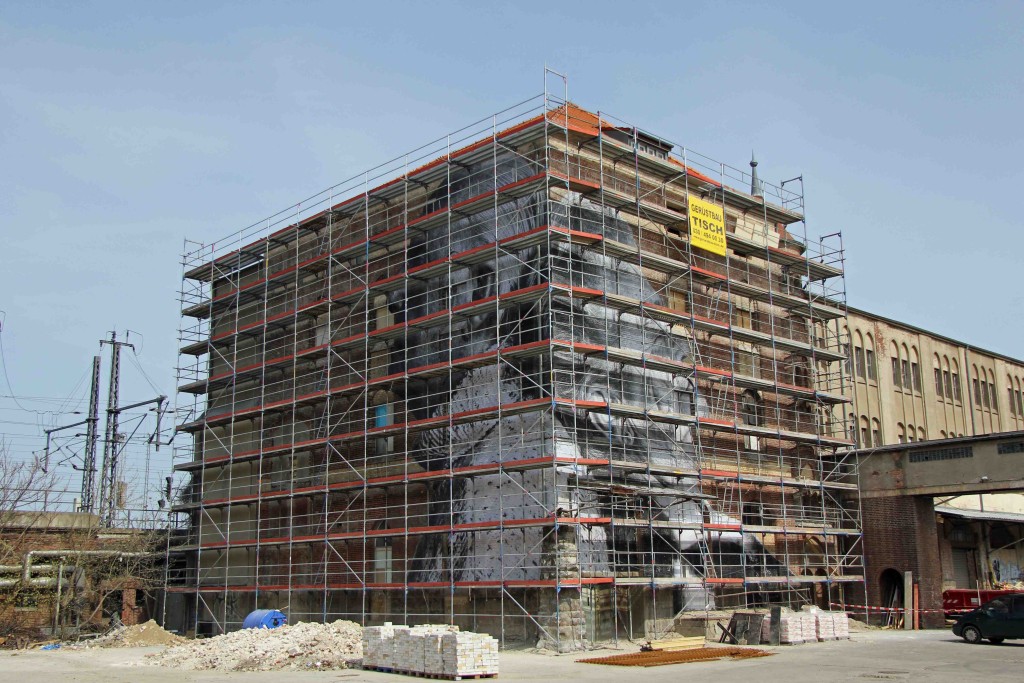 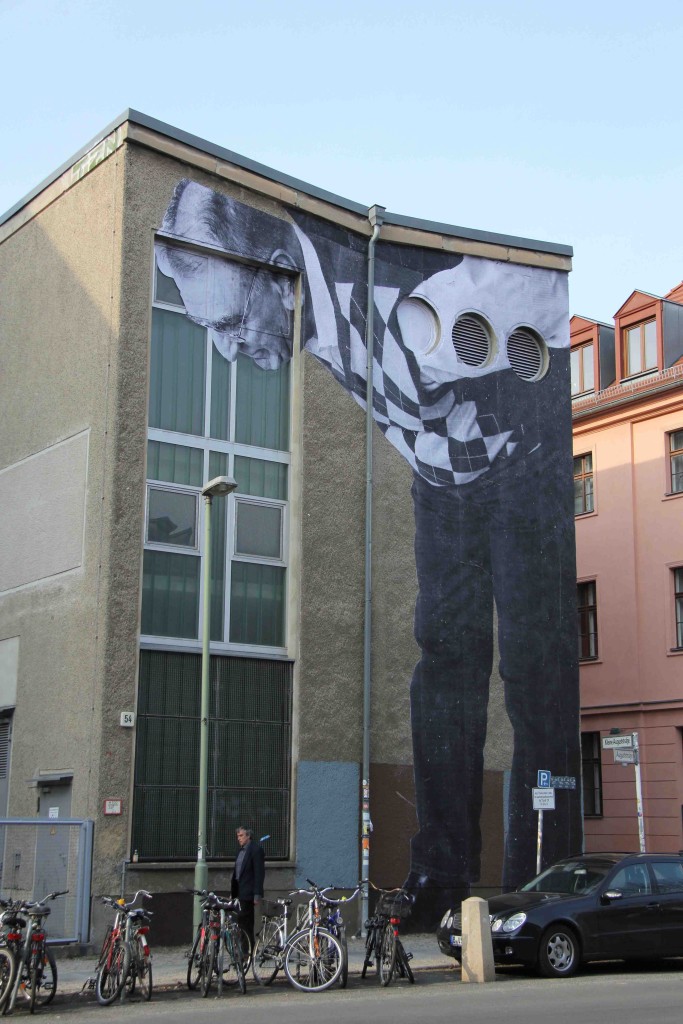 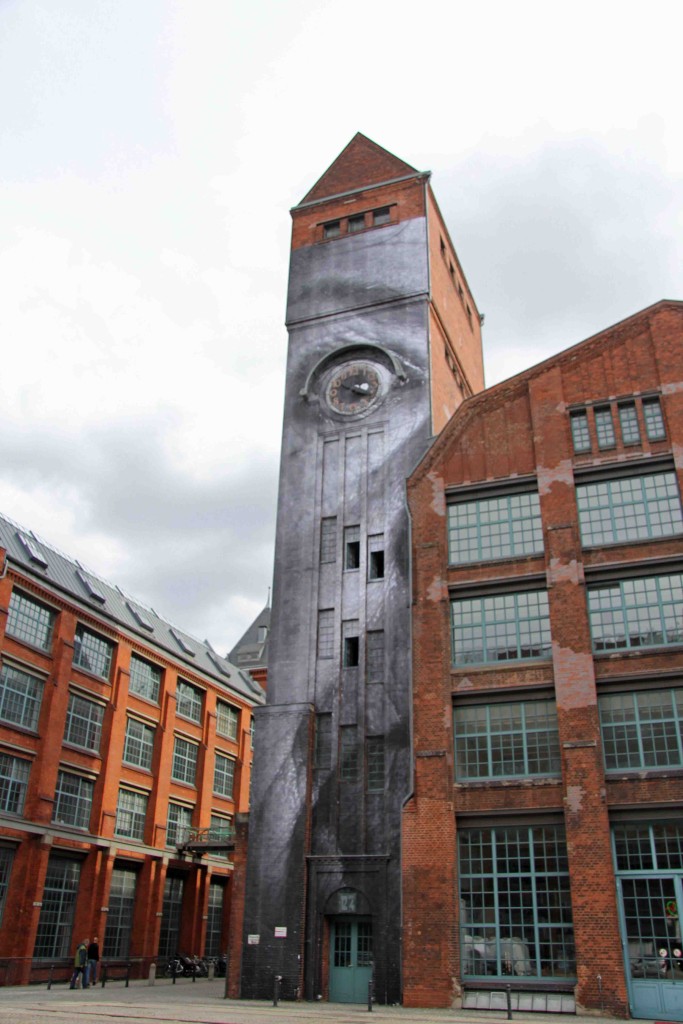 While he was here he also created impromptu artwork at the East Side Gallery, where he rebuilt a section of the wall recently removed by developers amid protests and added a paste up.  In this article in Berliner Morgenpost (auf Deutsch) it is alleged that a Security Guard was knocked out during the incident.  A photo of the artwork has subsequently been removed from JR’s intagram feed.

This isn’t JR’s first contribution to Street Art in Berlin.  JR collaborated with BLU on the mural at Cuvrystrasse that represents the struggle for East and West to remove each other’s masks to reveal their true identity, which featured in my BLU in Berlin post.  JR’s input, the eyes, had unfortunately long since disappeared by the time I first came to Berlin in 2009.  There is also a huge pair of eyes under the railway bridge from Friedrichstrasse station at Schiffbauerdamm.

An exhibition of Wrinkles of the City at Galerie Henrink Springmann runs until 25 May 2013, with two of the outdoor pieces nearby.  The exhibition includes original artworks on wood, incredible photos from the project in previous cities, a captivating multi-screen video installation (with blinking eyes) in the front room and a film of JR at work on loop in the back of the gallery.  It really compliments the street work and I would highly recommend a visit.

You can see more photos of JR’s Wrinkles of the City project in Berlin on his website, including photos of the piece on Warschauer Strasse with an uninterrupted view – an advantage of having access to the train tracks (parked trains have been in the way each time I’ve been there). 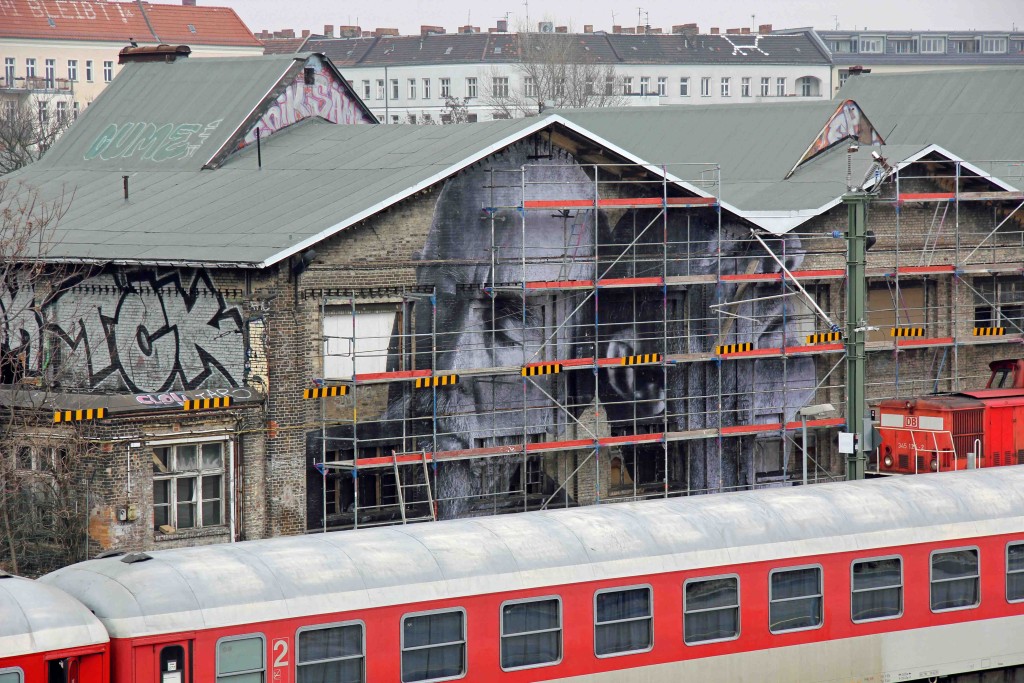 Also, for an interview with JR about the project, shot while he completed the work at Postbahnhof, check out this video from Enter Berlin, a YouTube channel dedicated to urban culture, art, food, fashion and music.

Street Artist JR – Wrinkles of the City // On the Beat

I hope to find more of the JR pieces from Wrinkles of the City in Berlin over the coming weeks.  Sooner rather than later hopefully because there is a question over how long some might last – the diggers are already perilously close to this piece. 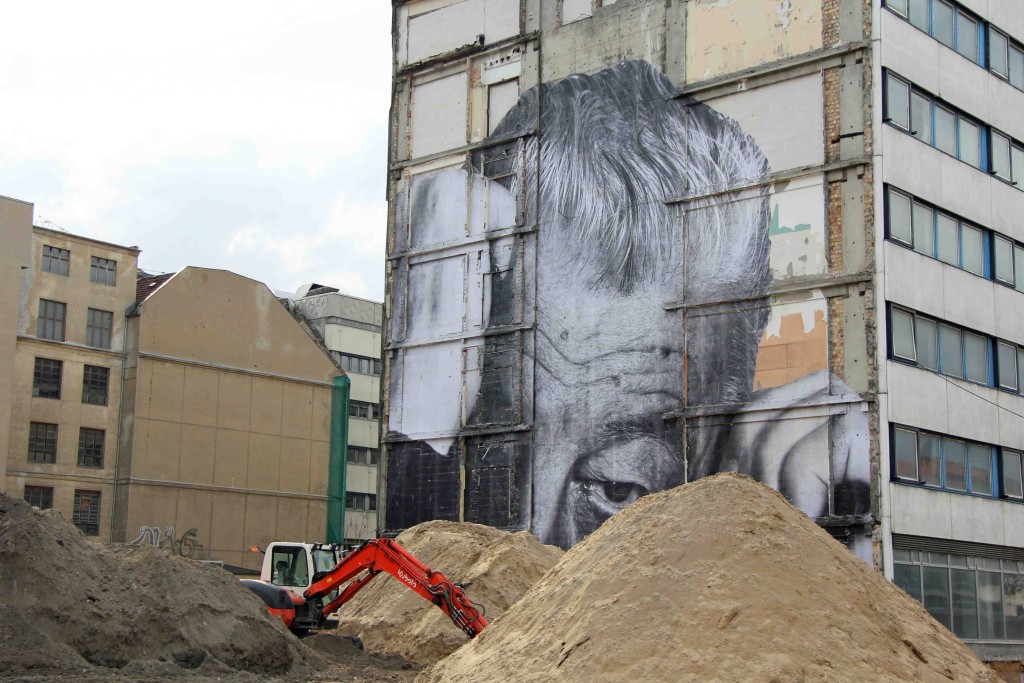 2 Responses to JR – Wrinkles of the City in Berlin