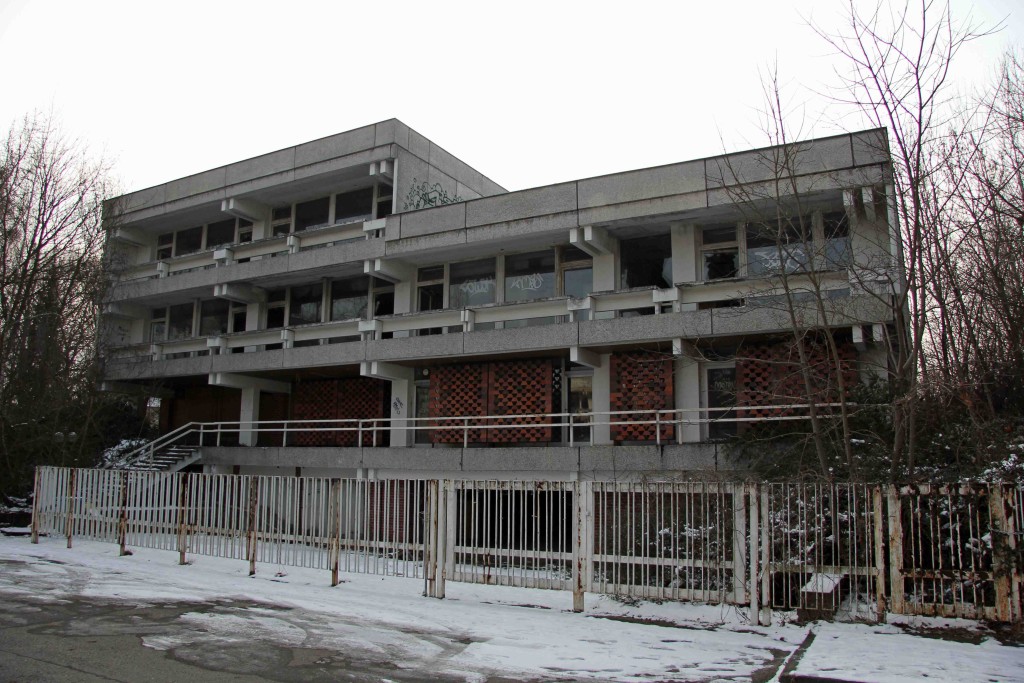 Built in 1974 and empty since staff were ordered to leave during the Gulf War in January 1991 the abandoned Iraqi Embassy in Berlin is a popular Urbex destination.

The non-descript pre-fabricated concrete building (the Plattenbau style so common in Soviet-era East Germany) sits in a quiet cul-de-sac in the former diplomatic quarter of the Deutsche Demokratische Republik (DDR) in Pankow.

Its grey walls belie its colourful past.

Iraq was the first non-Socialist country to recognise the DDR as a state in 1969 and a special friendship developed between the two countries.  It is widely believed that the DDR was offering scientific help to Iraq, particularly with their development of nuclear and chemical weapons.

In 1980, two members of staff from the embassy were arrested in West Berlin whilst attempting deliver a suitcase of explosives as part of a plot to kill a group of Kurdish dissidents at a meeting in Wedding. 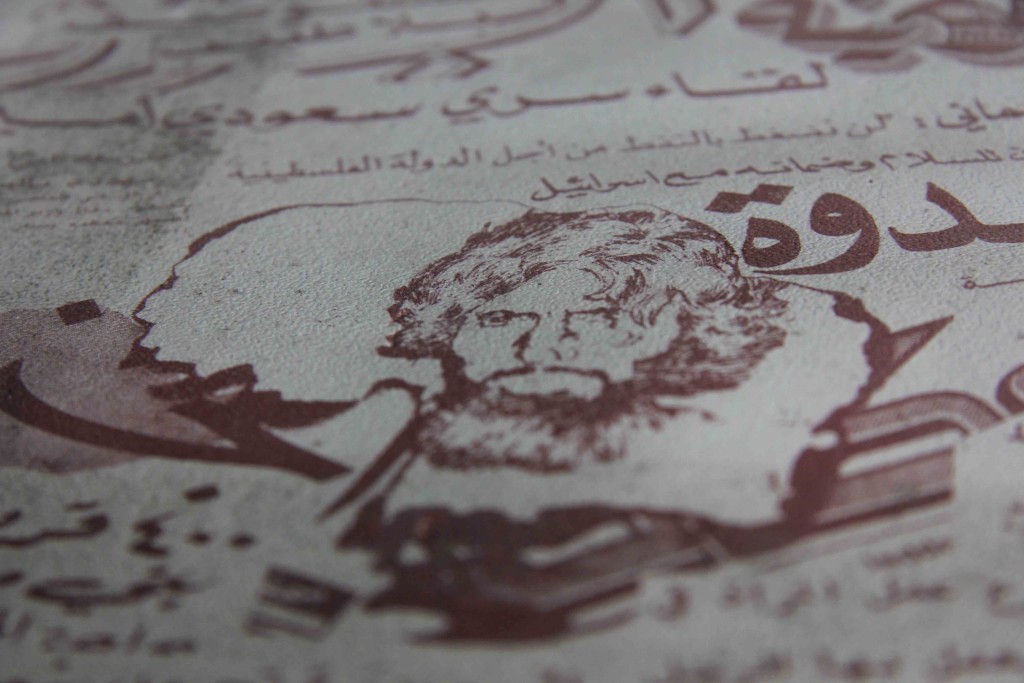 The embassy came under renewed scrutiny in 1990 when it was reported in the magazine Junge Welt, that the building was being used to stockpile weapons and explosives and to protect terrorists.  The East German Interior Ministry confirmed the weapons find and activities at the embassy were monitored closely.

And then they were gone.

Looking at the building now it would seem that when staff were ordered to leave in 1991 they left in a hurry.  The Iraqi Embassy to the re-unified Germany is now in Dahlem and has been since 2003.

Germany owns the land on which the now derelict embassy stands but granted Iraq perpetual rights to the land and building.  This has left the plot in a state of limbo.  The Germans say they have no right to it and the Iraqis have their shiny new embassy so they’re not interested. 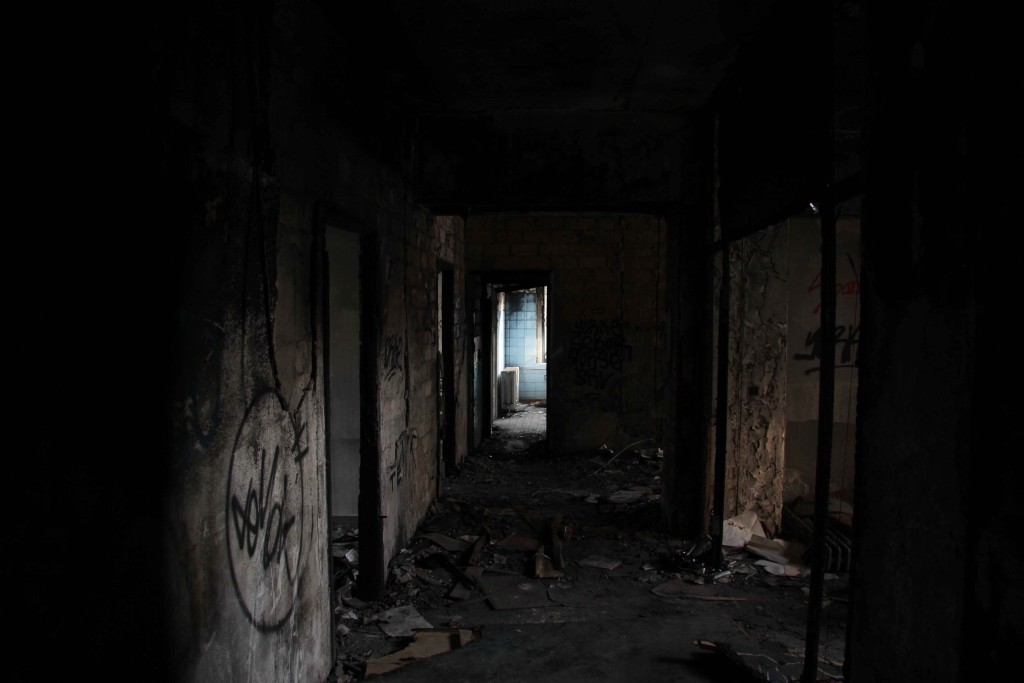 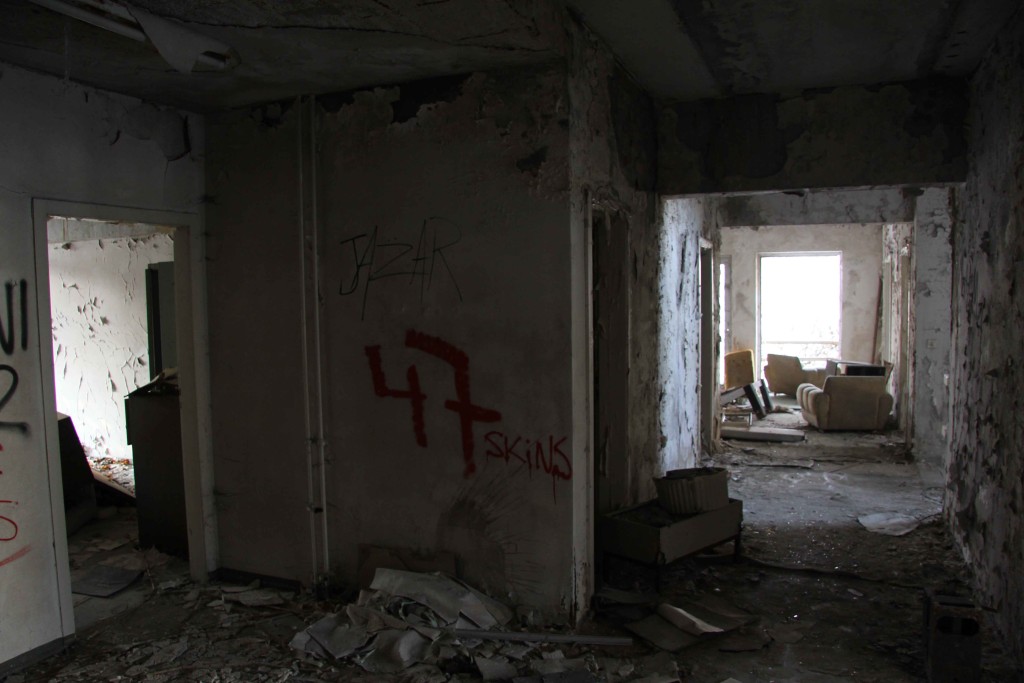 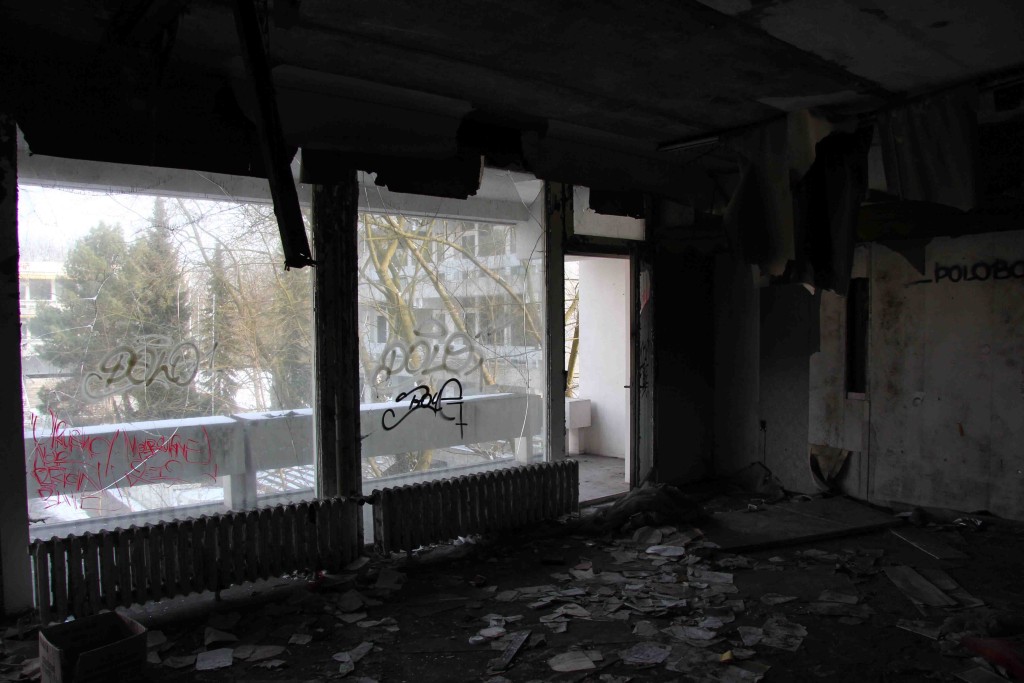 The Iraqi Embassy is in a dreadful state.

It is a series of dark corridors and draughty rooms, many of which are now completely open to the elements and there is broken glass and paperwork everywhere.

A lot of the writing is in Arabic so I can’t be sure but I assume any sensitive documents were taken away.  At one time the books, papers and files must have been stored neatly on shelves and in cupboards but now they are strewn across the floor and amassed in great heaps. 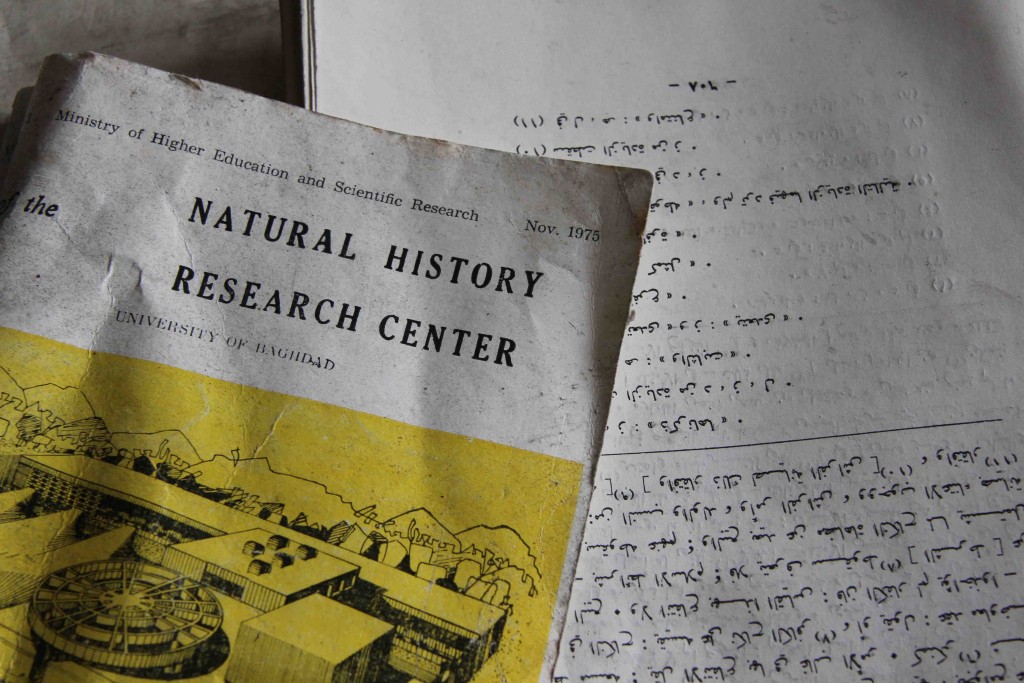 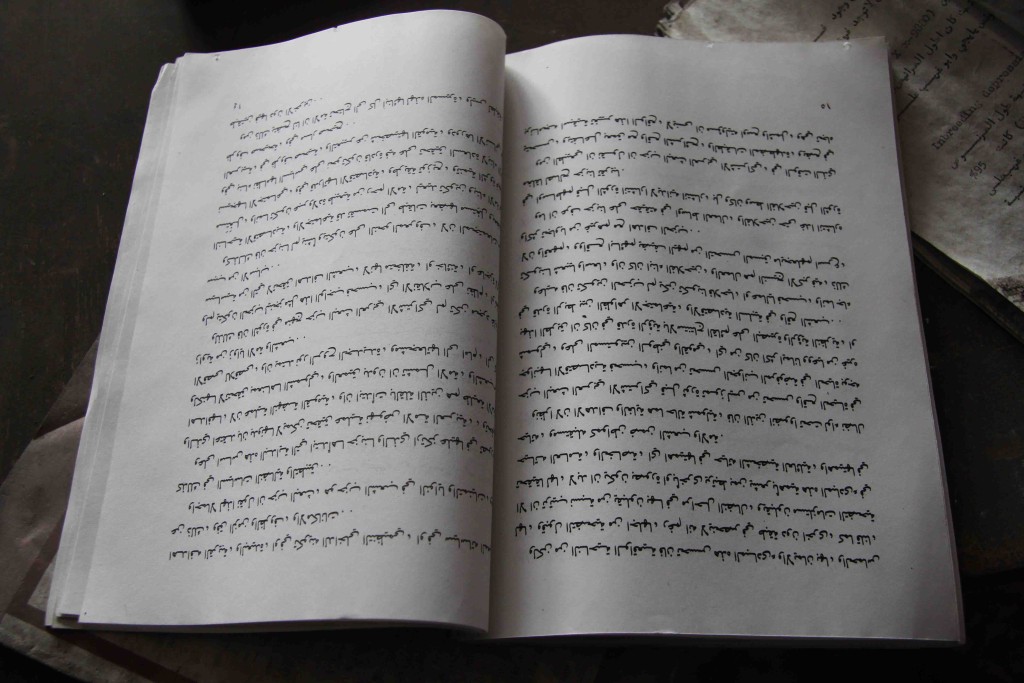 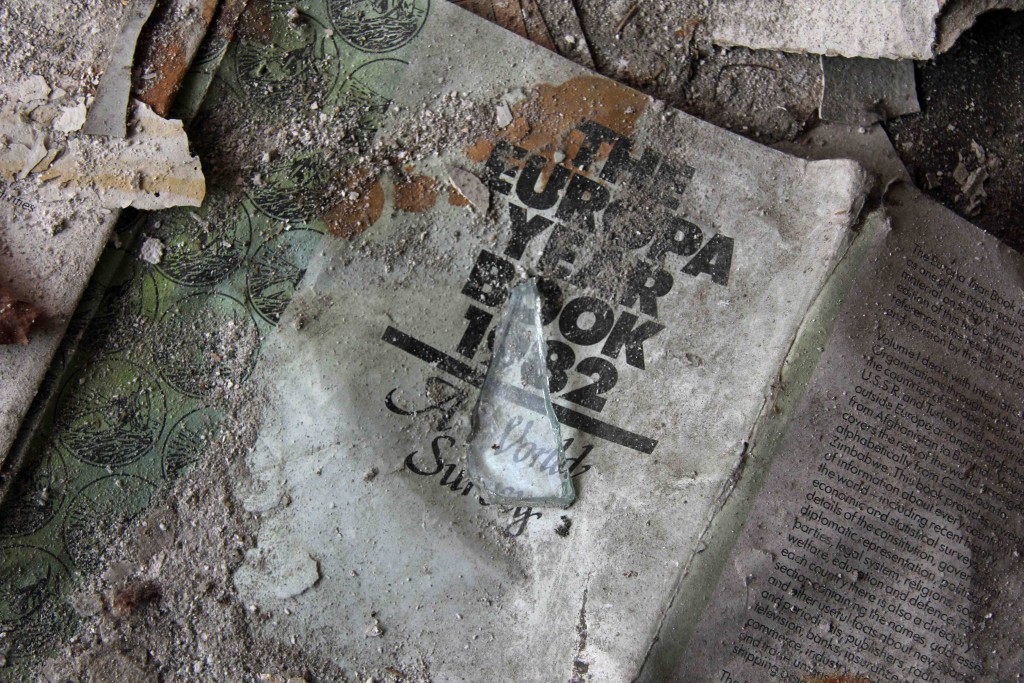 The smell of mouldy paper is overpowering.

As in all abandoned buildings the visitors have left their mark in the form of pictures, slogans and more considered art. 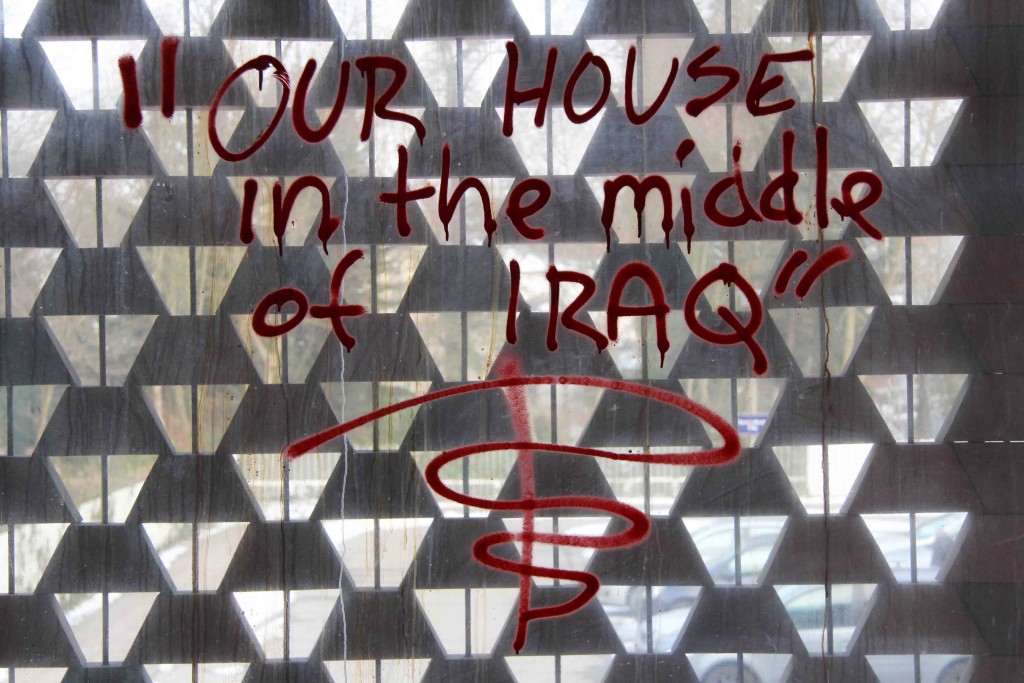 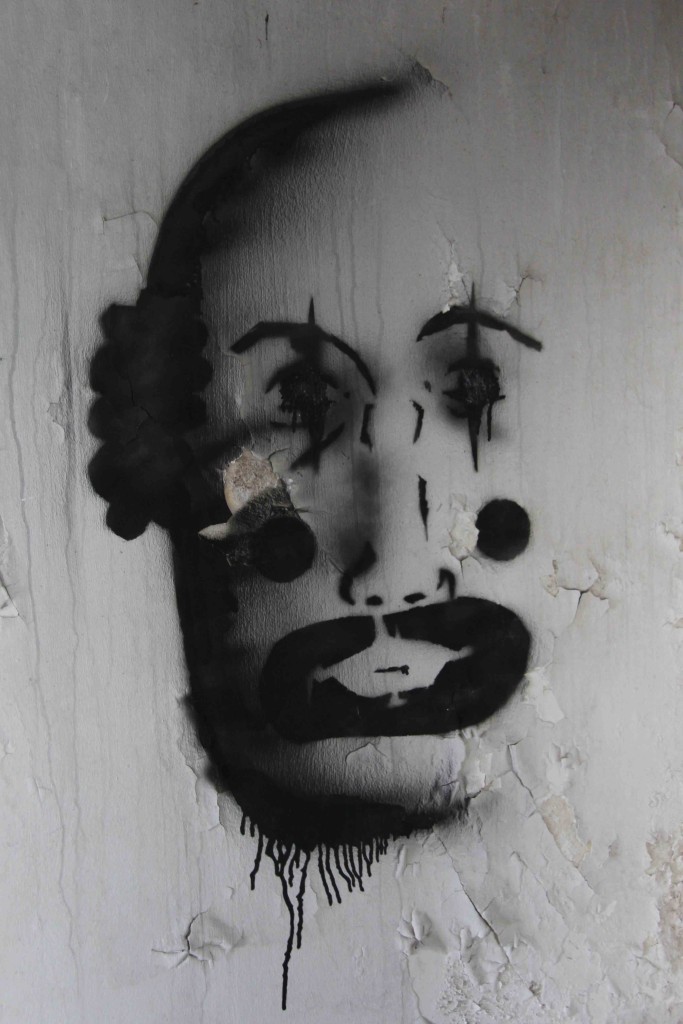 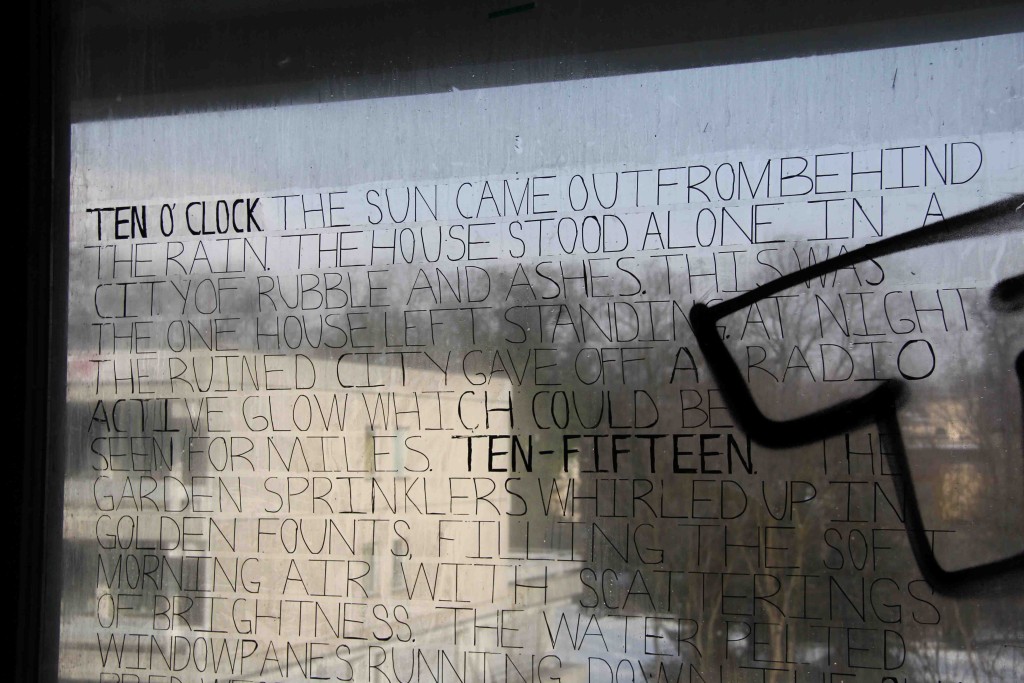 The furniture has been moved, papers have been burned and typewriters, faxes and photocopiers have been smashed and their keys have been removed. 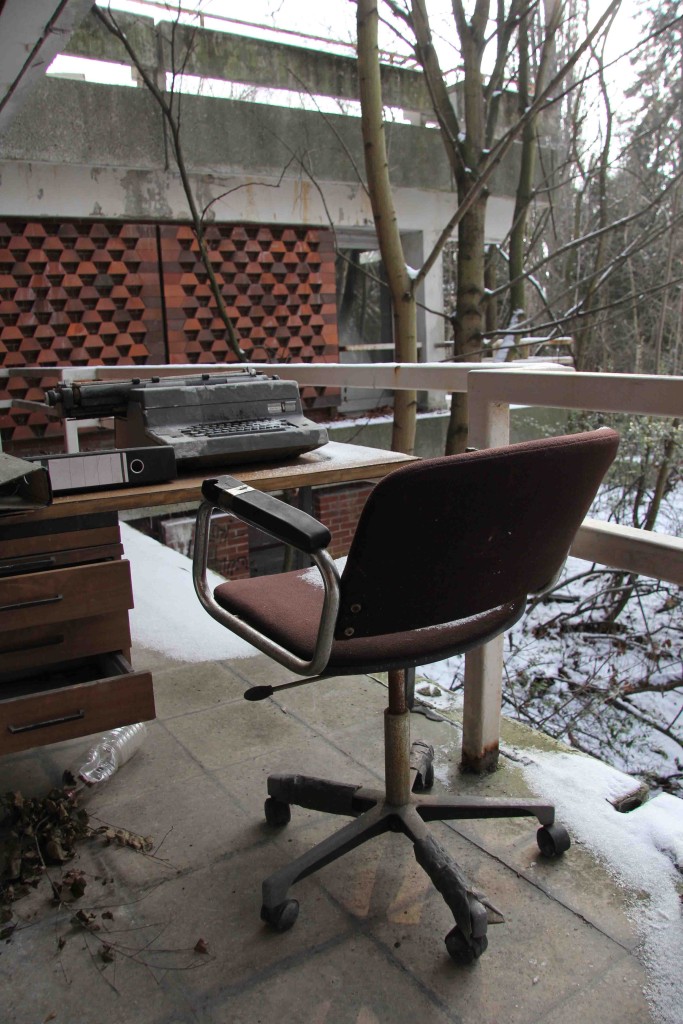 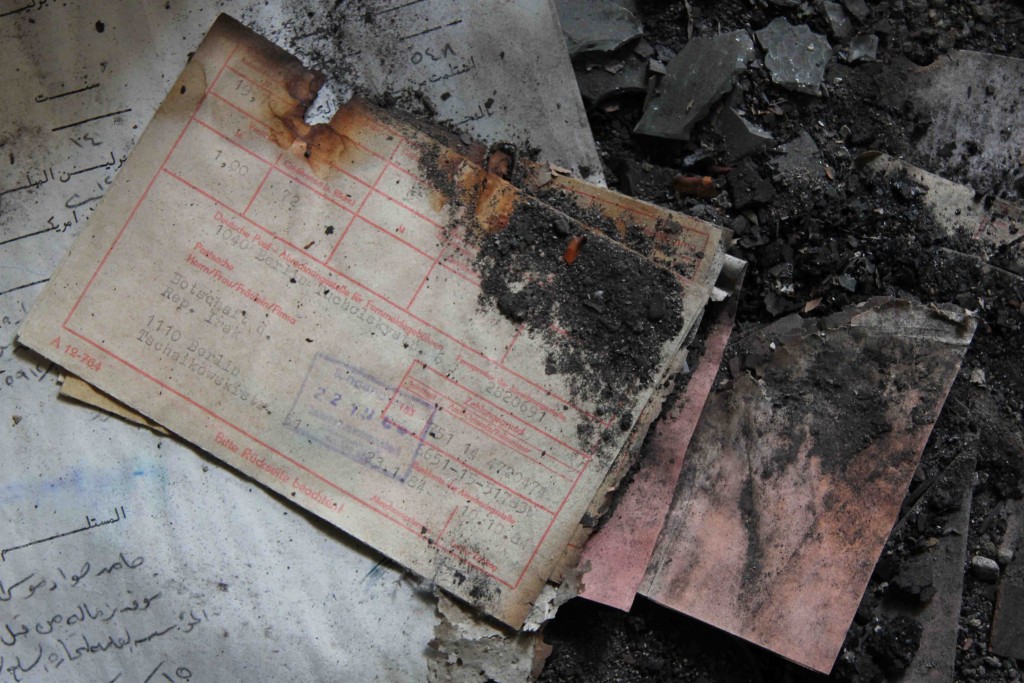 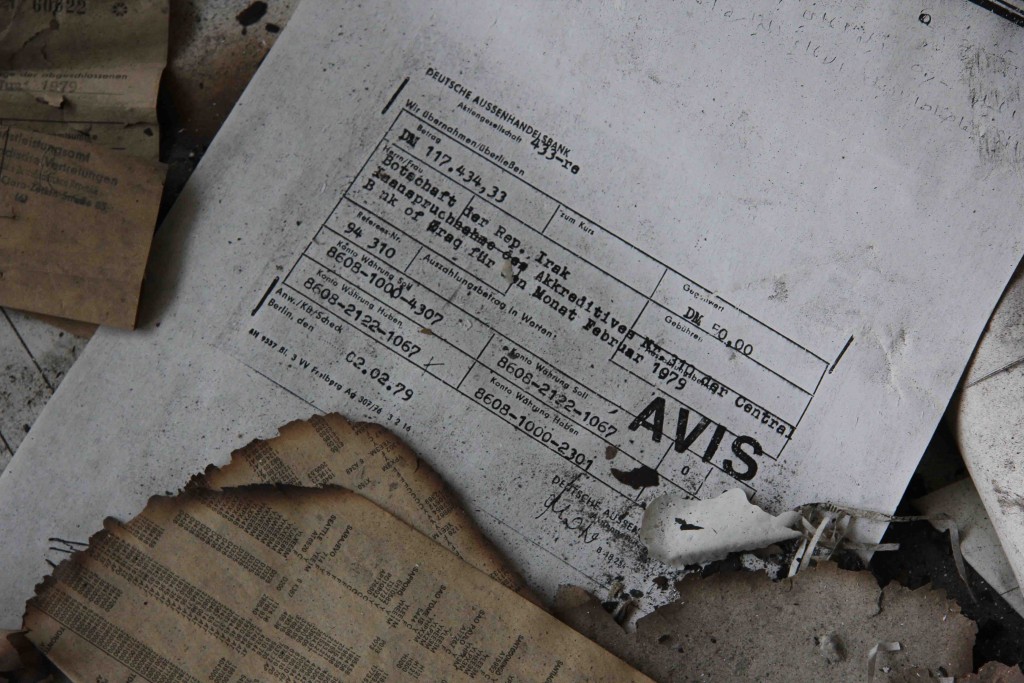 It is clear that many treasures have been looted.

Early blog posts and newspaper articles mention framed portraits of Saddam Hussein hanging on the walls – some of the authors even boast of the souvenirs they took.

Now there are just a few newspapers and calendars bearing his image. 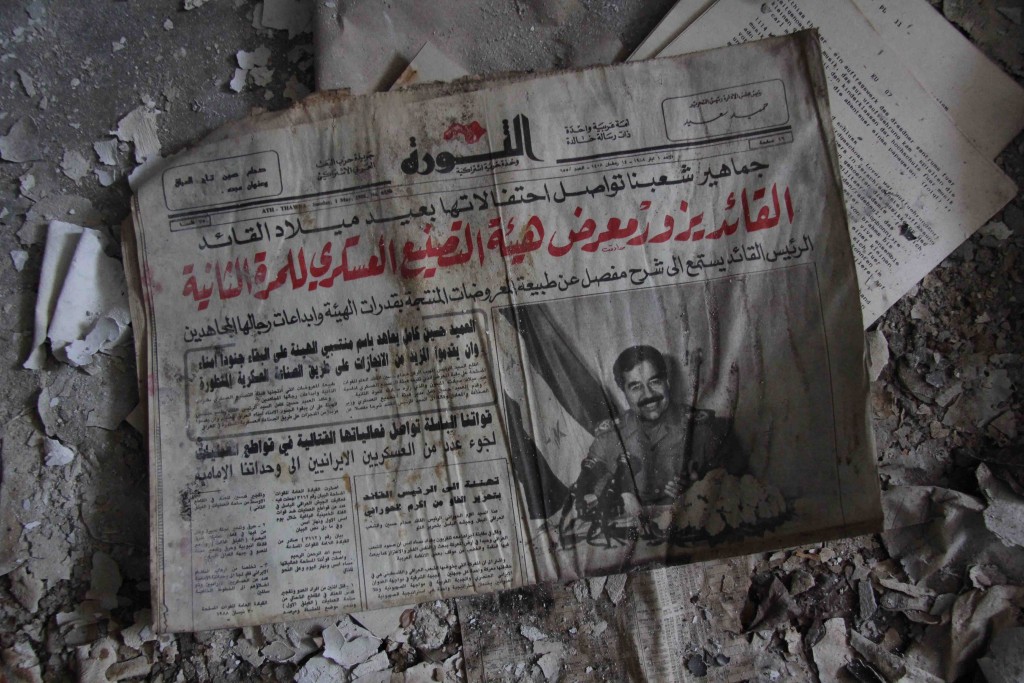 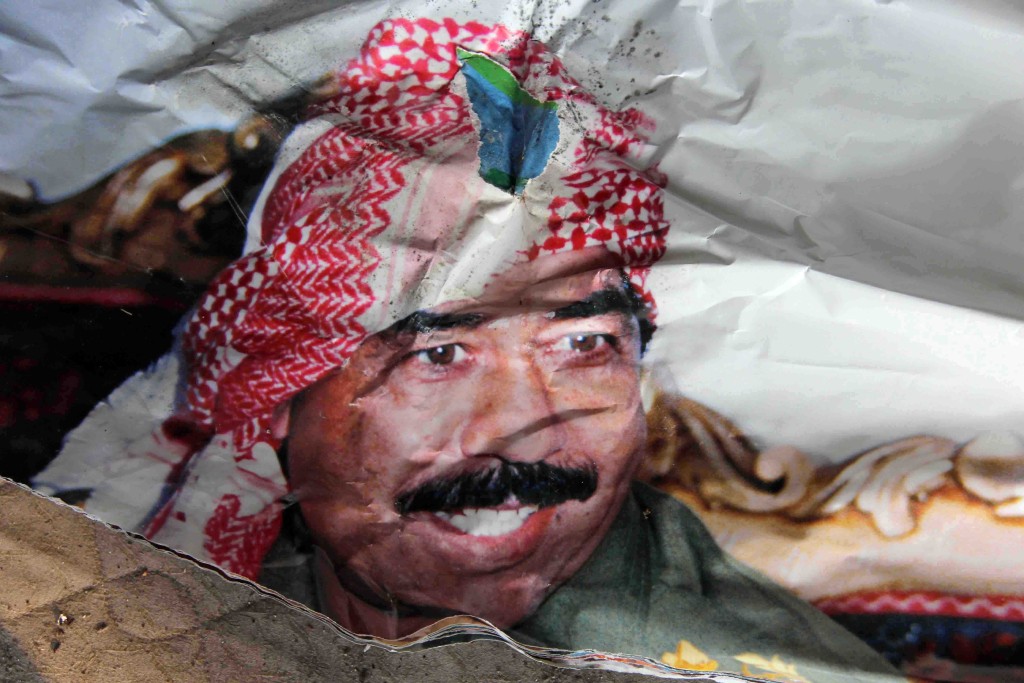 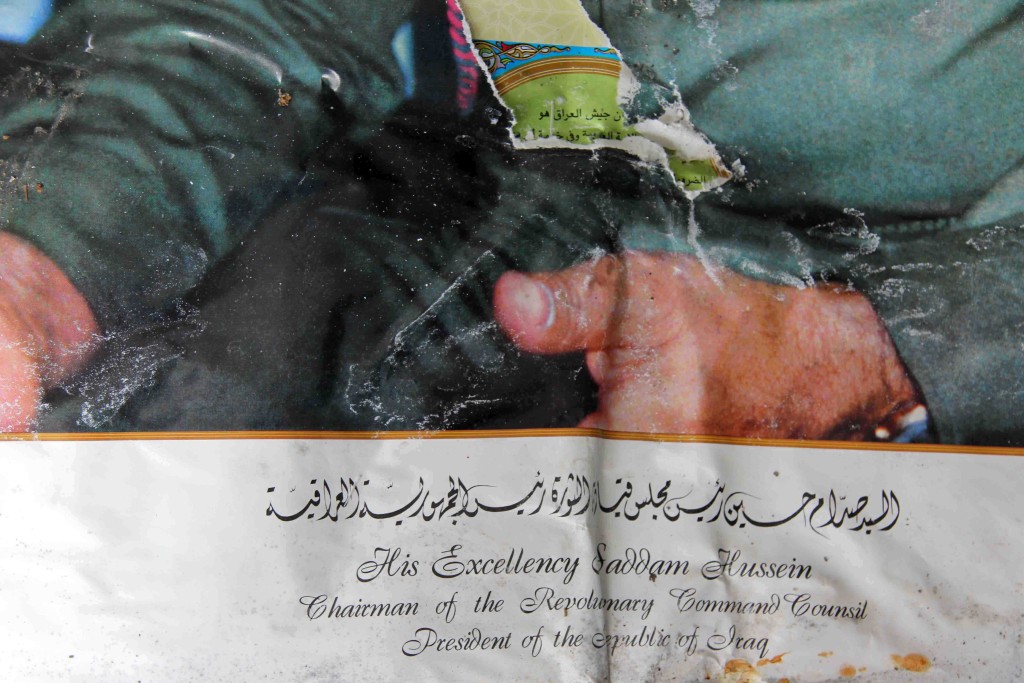 I would recommend visiting the abandoned Iraqi Embassy in Berlin soon before all vestiges of its past life have been plundered, damaged or burnt and all that’s left is a derelict shell. Who knows, Germany and Iraq may one day even sort out the issue of ownership and put the land to new use.