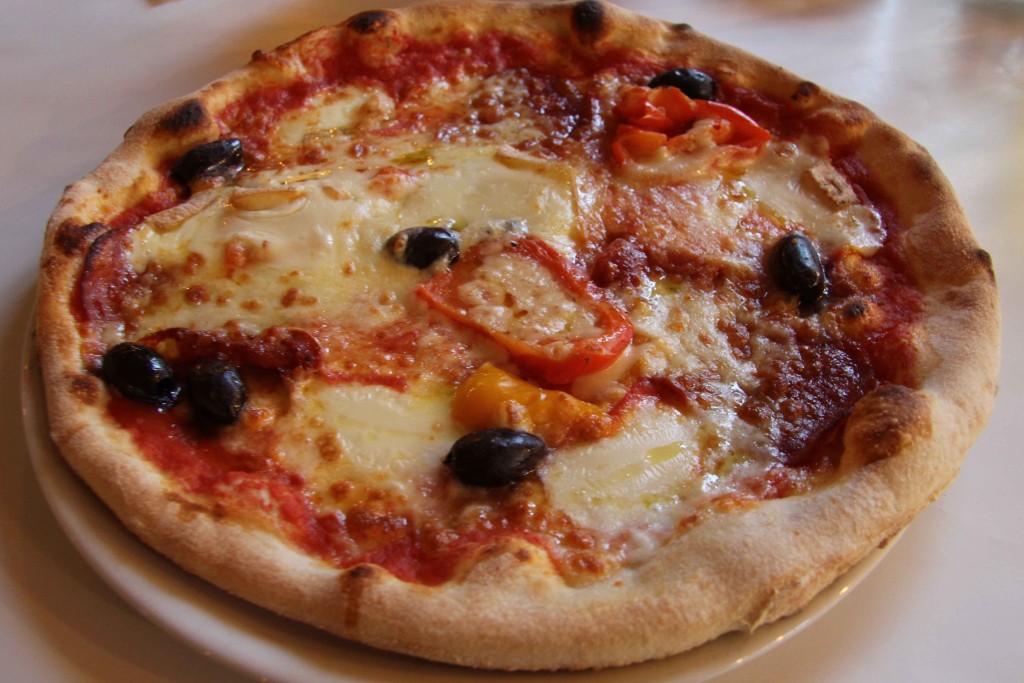 A Magica, which opened on Greifenhagener Strasse in Prenzlauer Berg in 2007 is run by Sebastiano and Andreas, who met in Berlin in the early 90s.

According to the restaurant’s website, Sebastiano the chef, is a pizza acrobat and has competed at national and international competitions, displaying his pizza tossing skills.

This small and friendly Italian pizzeria has an impressive array of pizzas on the menu but very little else – if you can’t find the pizza that matches your mood you can even create your own.

Both times I’ve been to A Magica I have had the Focosa – a pizza with tomatoes, Mozzarella, peppers (Paprika), Taleggio cheese, olives and spicy salami – washed down with a half litre of Wernesgrüner Pilsner.

The first time I went to A Magica, after I had spent the day at Schloss Charlottenburg, I described it as ‘the best pizza I’ve ever had‘.

On my latest visit yesterday the pizza wasn’t quite so spectacular but was still incredibly tasty.

The spicy Salami (scharfe Salami) has a real kick to it, so as well as one of the tastiest, this is also one of the spiciest pizzas I’ve eaten.  The beer was enough to put out the fire though.

A Magica is a popular little restaurant and rightly so. It is especially popular with Prenzlauer Berg families according to some of the reviews I’ve read, though I haven’t seen many children in my two visits.

A total bill of €11 for a pizza and a beer represents excellent value for money in my opinion and I would have no hesitation in recommending A Magica for a tasty lunch or evening meal – you might want to book first though.