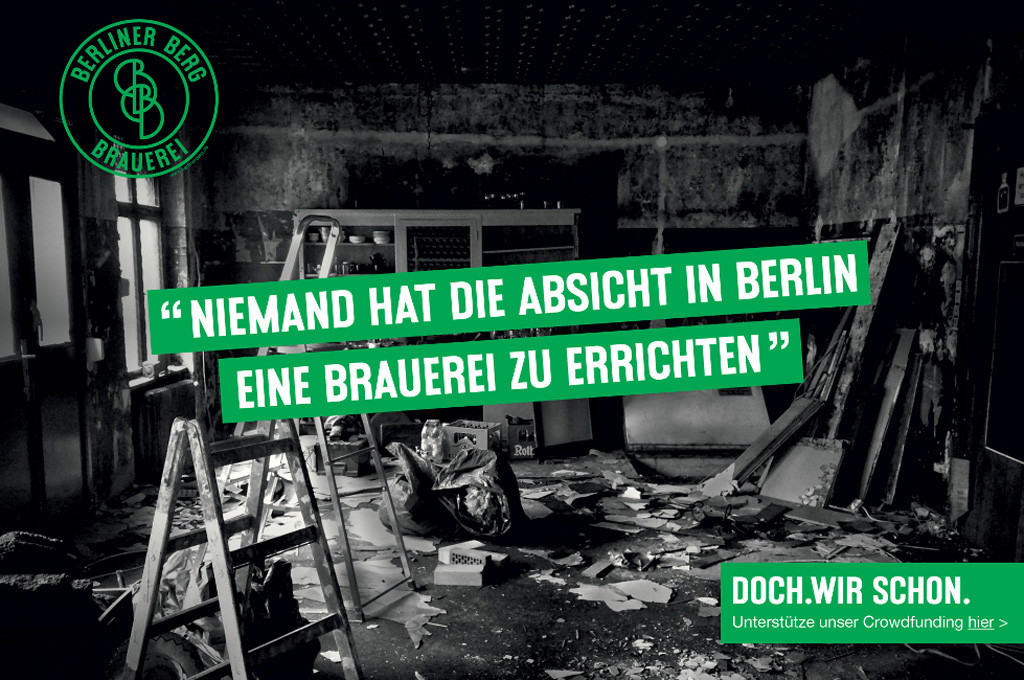 The guys at Berliner Berg are hoping to tap into the unquenchable thirst for craft beer in Berlin.  The slogan (paraphrasing former GDR leader Walter Ulbricht) reads “No one has the intention to erect a brewery in Berlin” but that is exactly what they are hoping to do with the funds from their Startnext crowdfunding campaign.

There is previous for crowdfunded breweries in Berlin – in 2013 a group of beer enthusiasts raised over €21,000 and Vagabund Brauerei in Wedding was born.

In their own words:

Berliner Berg was founded by four beer enthusiasts.  Three Germans and the brewer Richard Hodges from the USA. Building on that set-up, it is our aim to combine German high quality brewing processes and traditions with the sparkling creativity of the US American Craft Beer movement.  We want to create new types of beer as well as re-create old German classics such as the Berliner Weiße sourbeer.

Berliner Berg is already producing a Pale Ale and Lager, both of which I sampled last night (picked out from a vast selection of craft beers at Biererei, the craft beer Späti on Oranienstraße) and would highly recommend.

The aim of the crowdfunding campaign is to finance the creation of the brewery in the back courtyard of a former factory in Neukölln (a tap room at the front of the building will allow visitors to sample the brews).

Setting up a brewery isn’t cheap – a lot of pretty expensive equipment is needed so if you would like to play a part in making the Berliner Berg dream a reality you can contribute on Startnext.