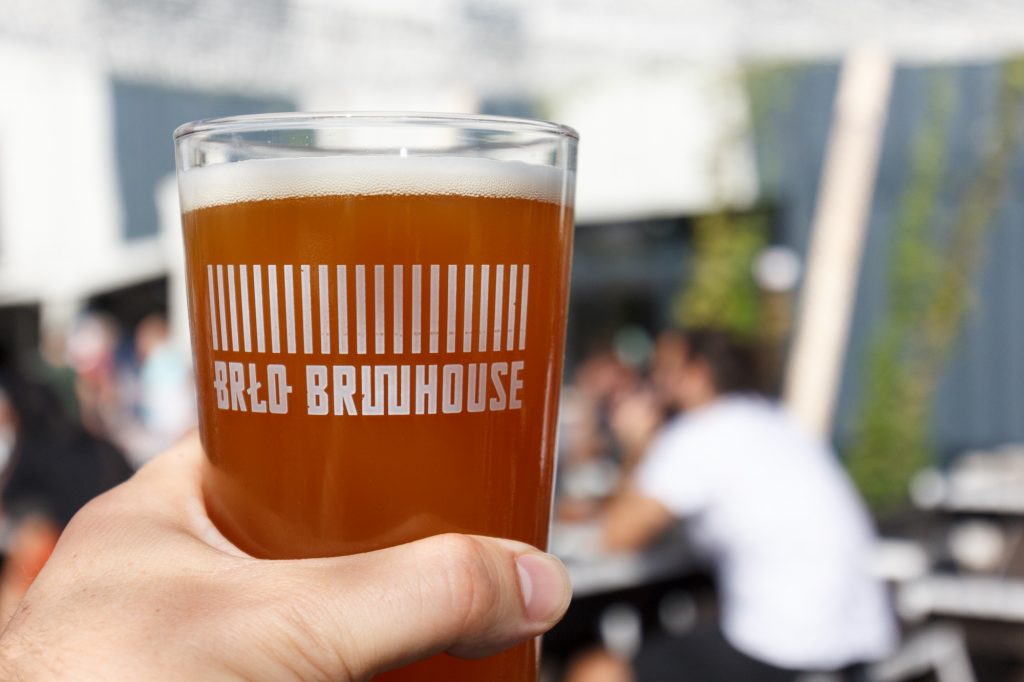 A paradise on earth for Craft Beer lovers, BRLO Brwhouse, on the edge of the Park am Gleisdreieck in Berlin is a combination of brewery, bar, restaurant and beer garden. 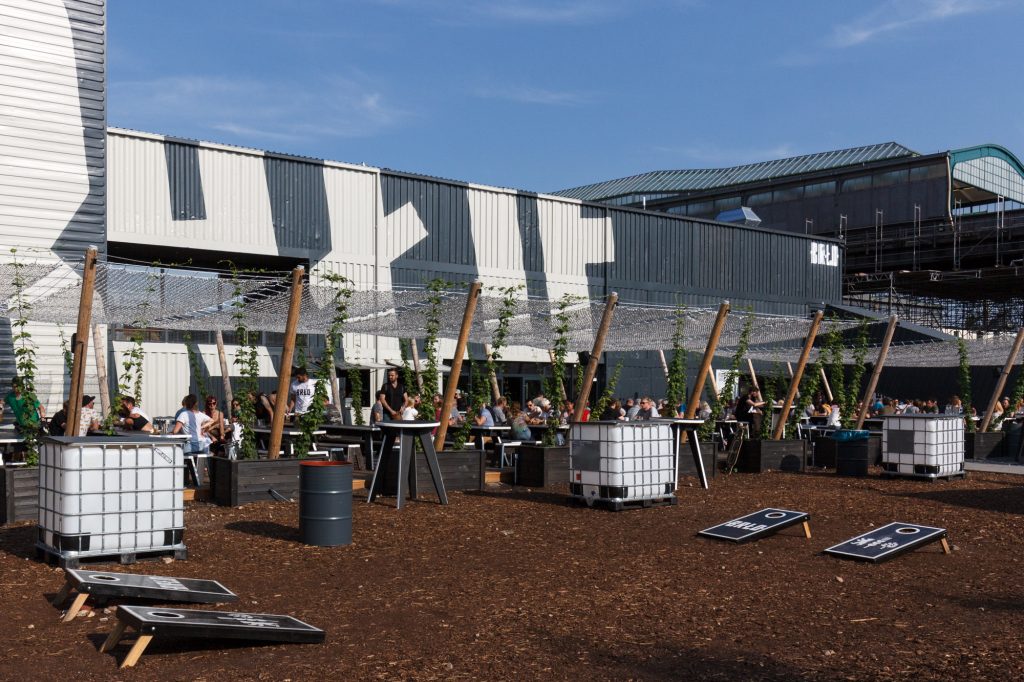 The Brwhouse, which consists of 38 recycled shipping containers, celebrated its official opening in January 2017 and is the latest chapter in a story that goes back several years.

Katharina Kurz and Christian Laase discovered their shared passion for beer during their time studying together at university. Meeting master brewer Michael Lembke allowed them to turn a vague idea that had been fermenting for some time, that one day they would together ‘do something with beer’, into reality. The trio founded BRLO and have been brewing craft beer in Berlin since 2014.

They chose the name BRLO to celebrate the brewery’s affinity to Berlin.

BRLO is the old Slavic origin of the name Berlin. There are many interpretations as to the exact meaning of the word, but it means something in the range of marshland or a dry area within a marshland. It is pronounced similarly to Berlin. BERLOW.

They stress though that enjoying the beer is much more important than knowing how to say the name. 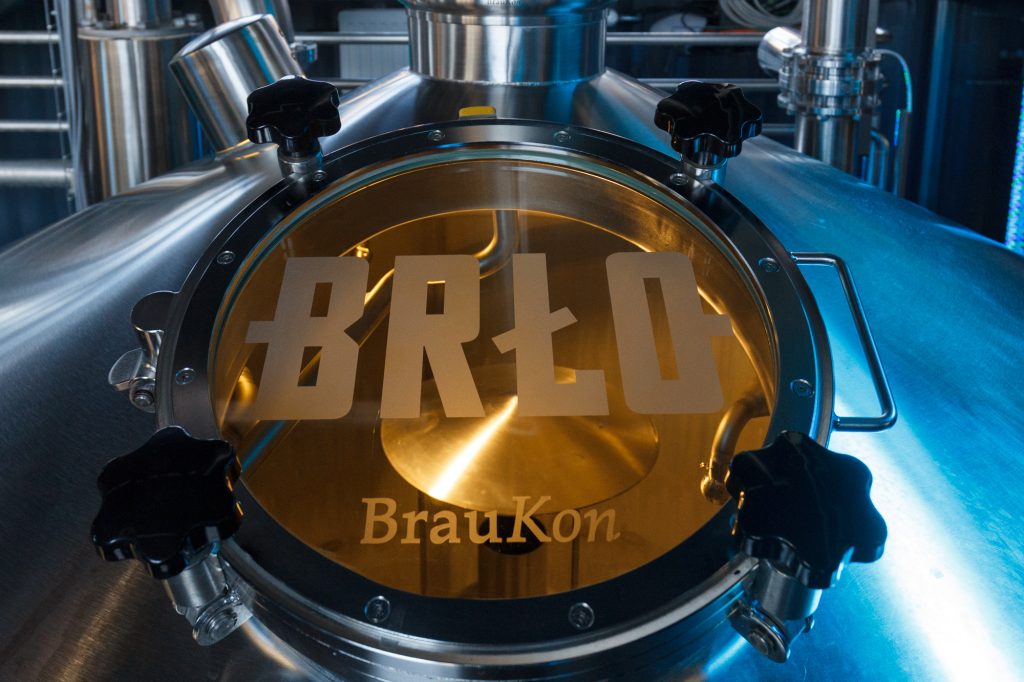 Given these roots it is only right that the brewery is a showpiece in the BRLO Brwhouse. A large window over the bar gives visitors a view of the 20HL Braukon system used to brew BRLO’s Berliner Weisse, small batch beers and collaborations – Container Love, a New England IPA brewed in cooperation with 40FT Brewery from Dalston, East London was my beer highlight of Summer 2017. 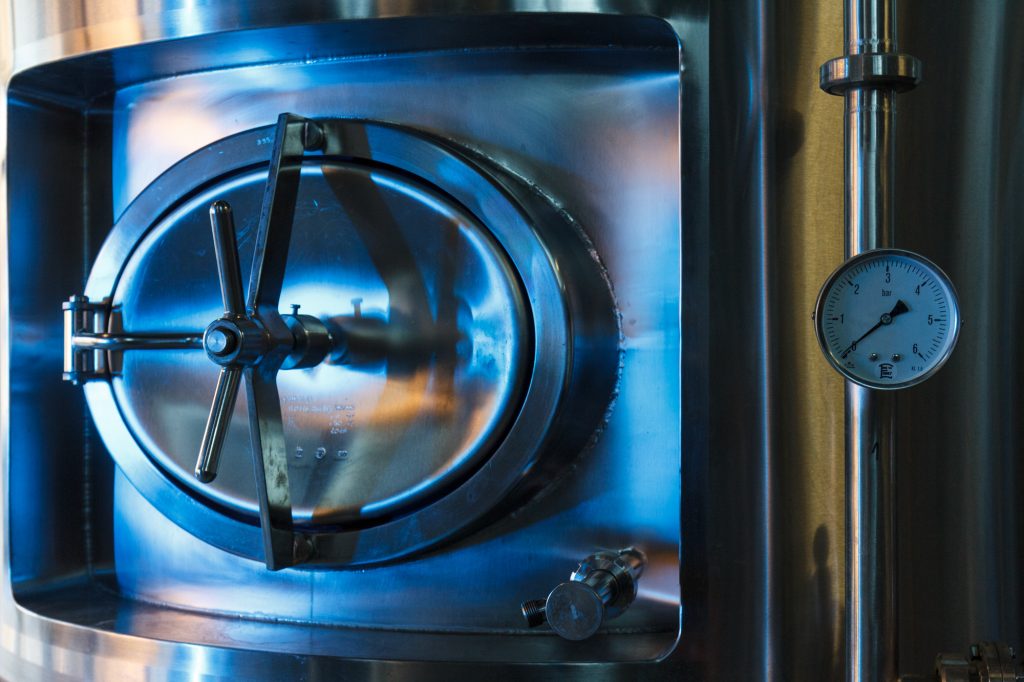 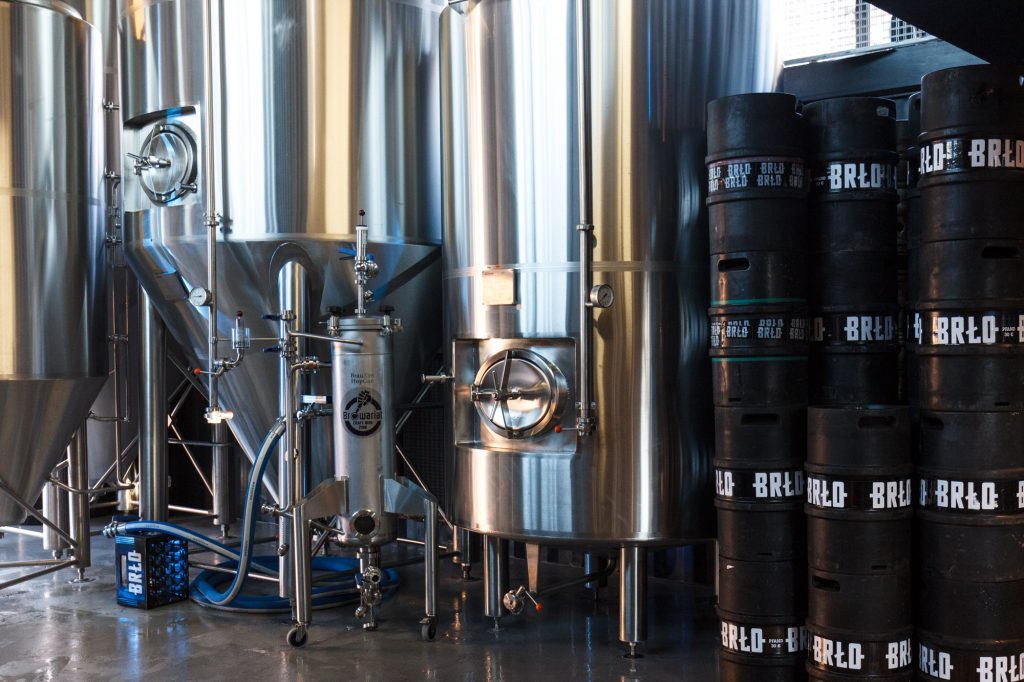 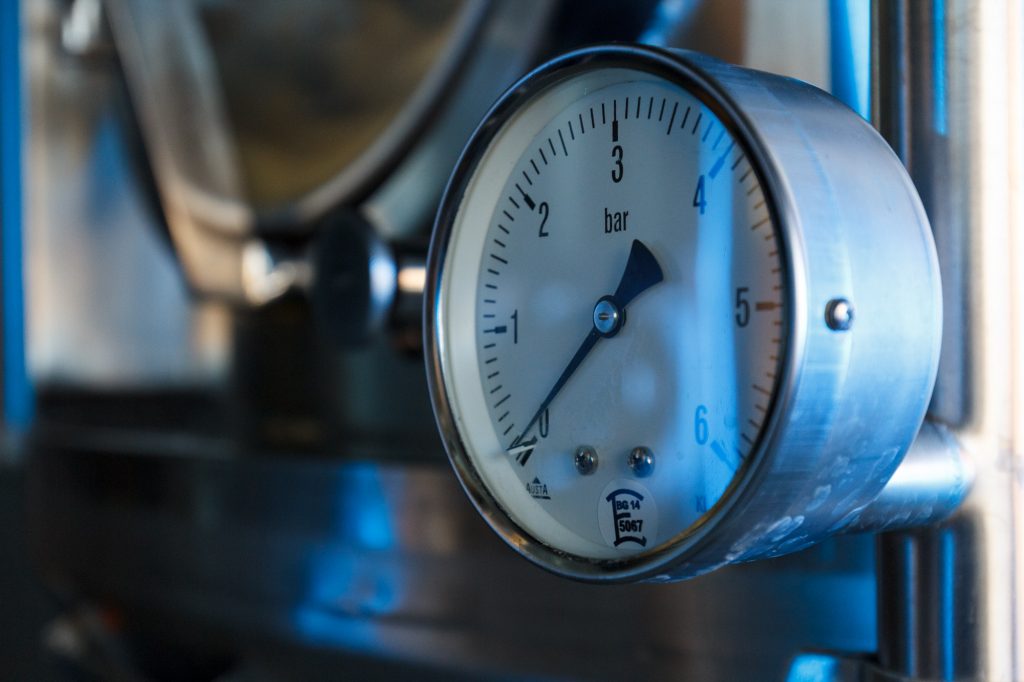 BRLO offers brewery tours for anyone who’d like to learn more about how beer is brewed with an opportunity to taste the goods of course.

The brewery is an impressive sight but isn’t capable of satisfying demand for BRLO beers so the other beverages from their standard range are produced elsewhere. Their Helles is brewed at Klosterbrauerei Neuzelle in Brandenburg, and their Pale Ale, German IPA, and Porter in Brauerei Landsberg in Saxony-Anhalt. The brewing process is closely scrutinised by BRLO. 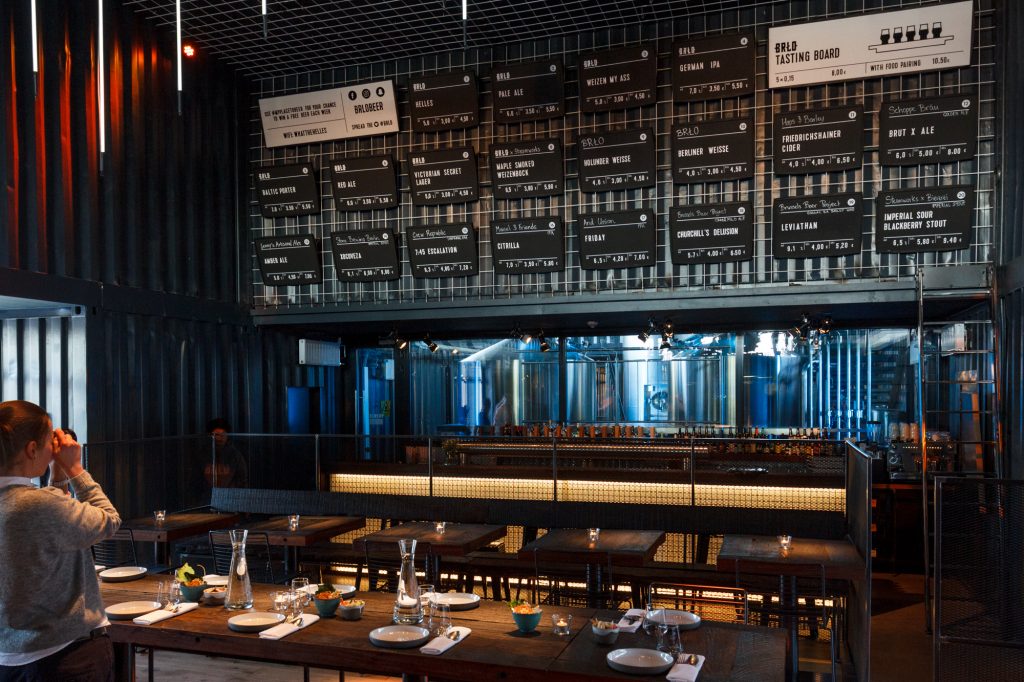 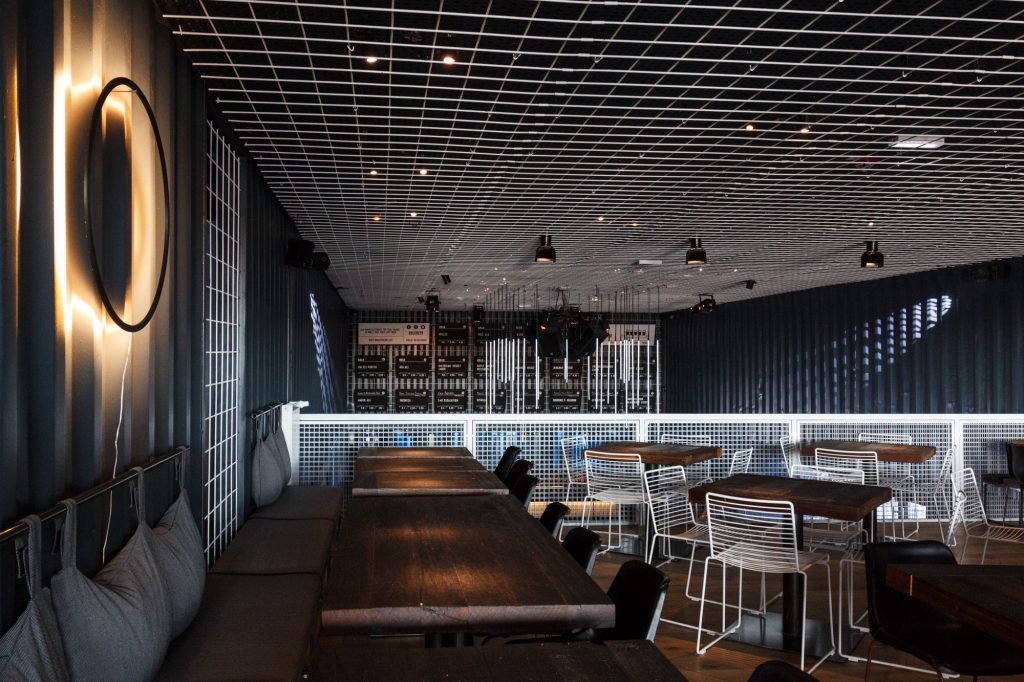 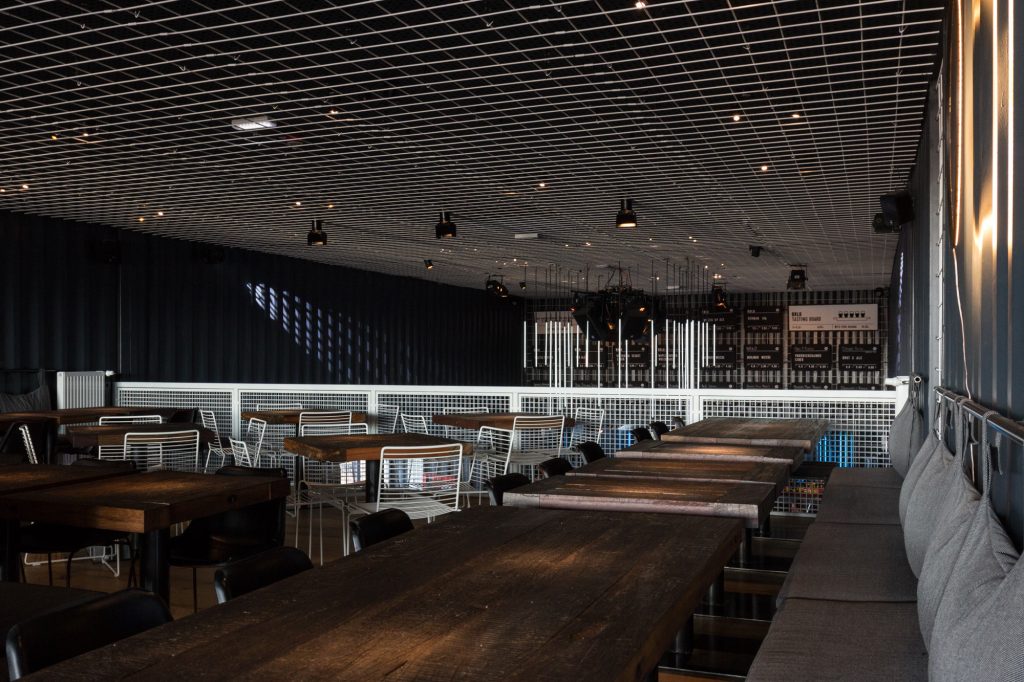 An ever-changing and extensive selection of guest beers (including several local brews) supplements the BRLO range at the bar. Such a dizzying array should mean that there is something here to suit every drinker’s palate. 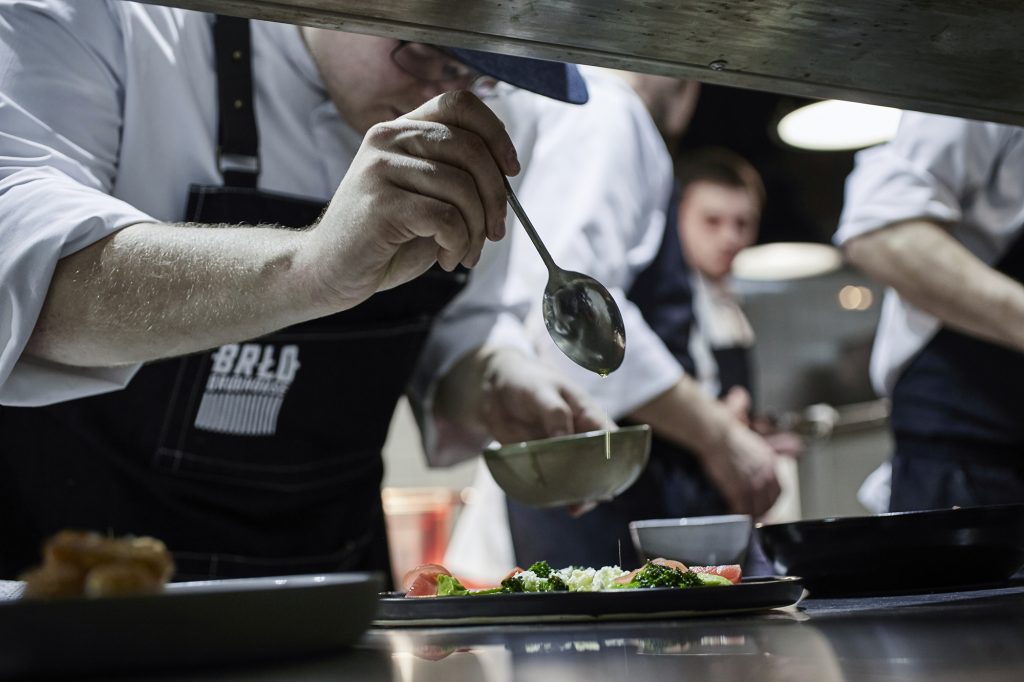 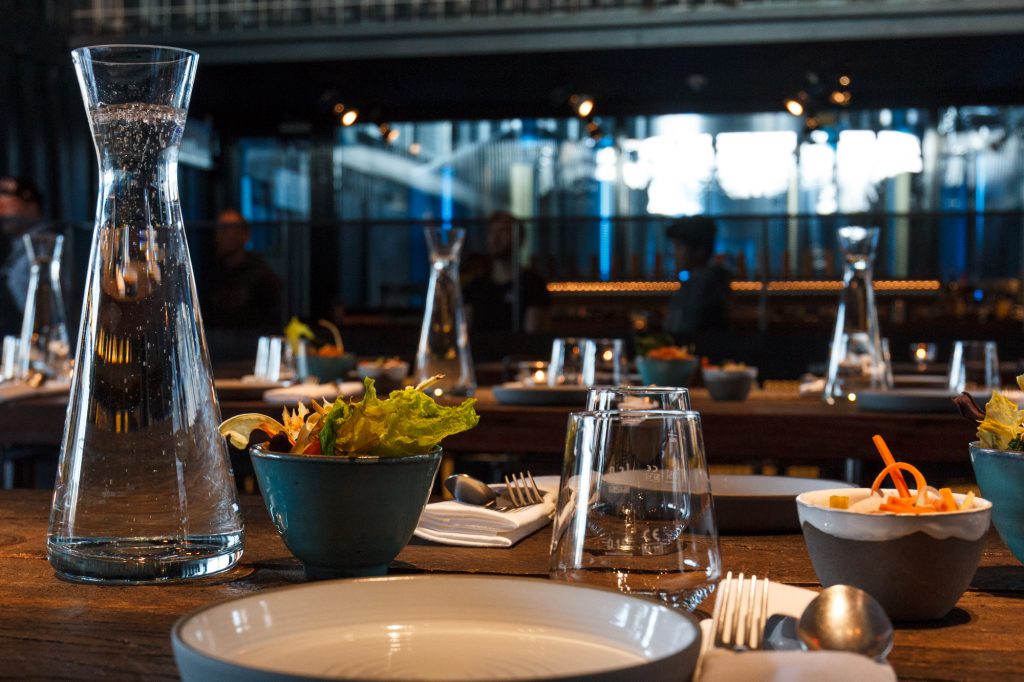 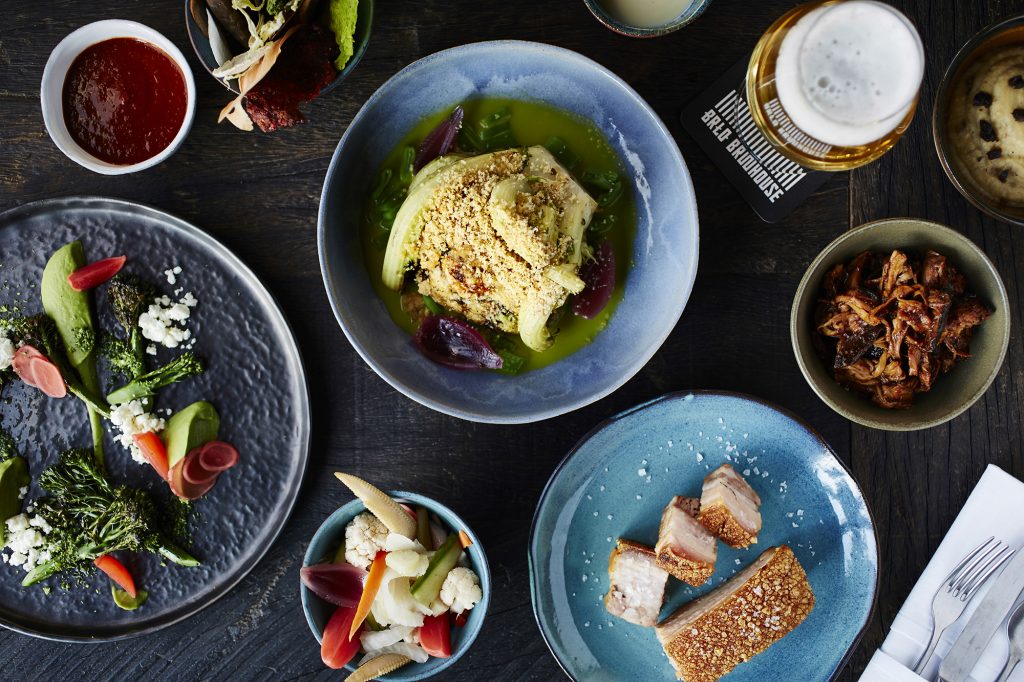 Under the guidance of head chef Ben Pommer, the food concept at BRLO Brwhouse has been designed to complement the beer line-up.

The BRLO philosophy of ‘sustainability, regionality, quality’ carries through from their brewing to the food. There are separate food offerings for the restaurant and beer garden.

Pommer’s bold move to give vegetables the lead role on his restaurant menu (meat lovers: fear not, it isn’t a vegetarian restaurant) has earned him much praise and the BRLO Brwhouse was named “Berliner Szenerestaurant 2017”.

Living in a city with harsh winters that sometimes feel like they will never end, Berliners are determined to seize every opportunity to spend time outdoors so beer gardens are a blessing. And the beer garden at BRLO Brwhouse is a peach! 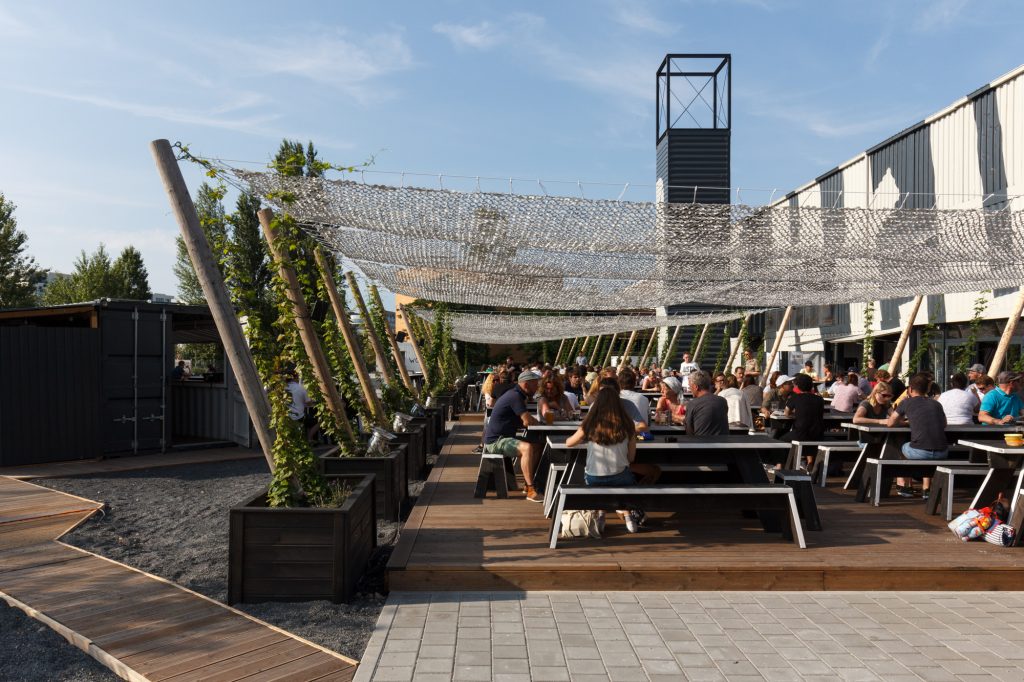 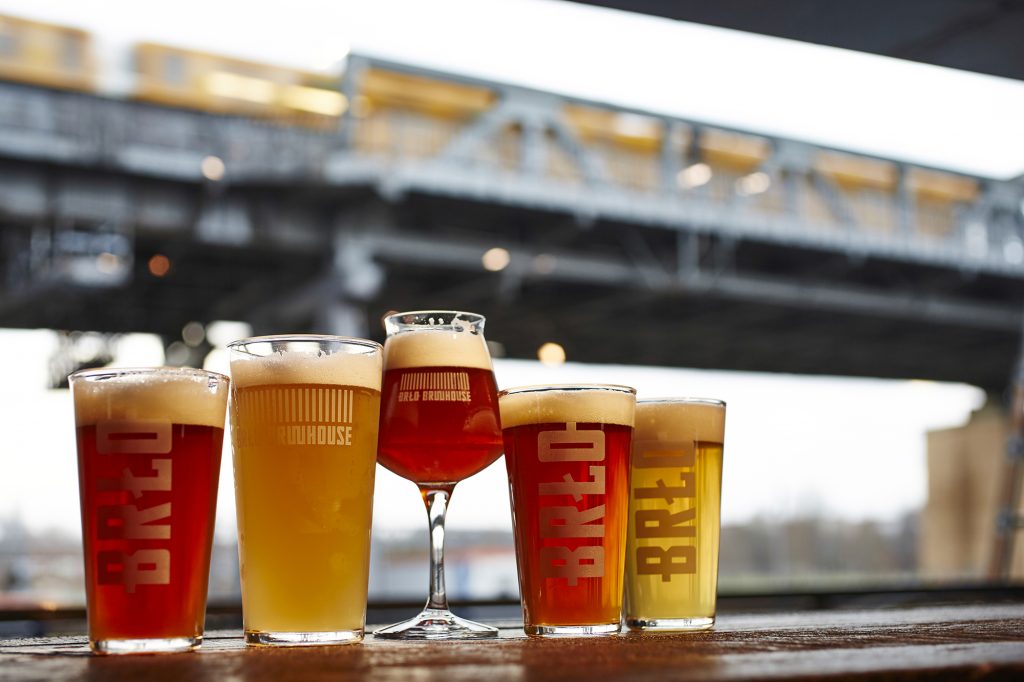 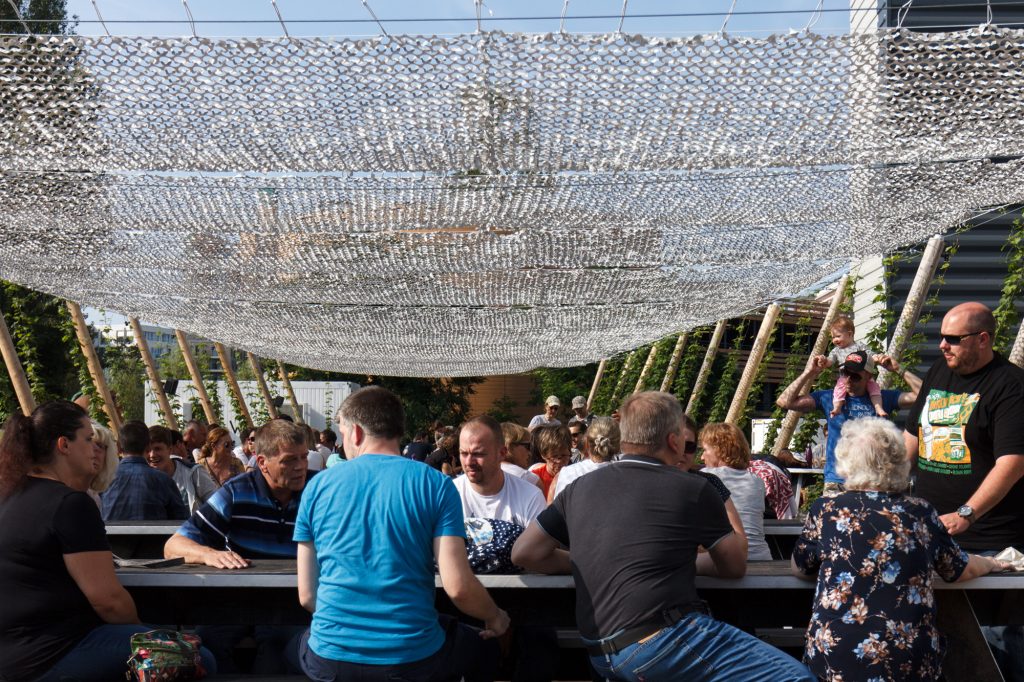 There is a patioed area with tonnes of tables and benches, a mulched section with stacks of deckchairs for lounging around and several Cornhole boards for the more active, and two outdoor bars.

I’m looking forward to seeing how the beer garden will look when the hops, currently taking hold on the netting over the benches and tables, spread out to form a canopy, that in combination with the lights strung through them will make the atmosphere cosy, romantic and cool. 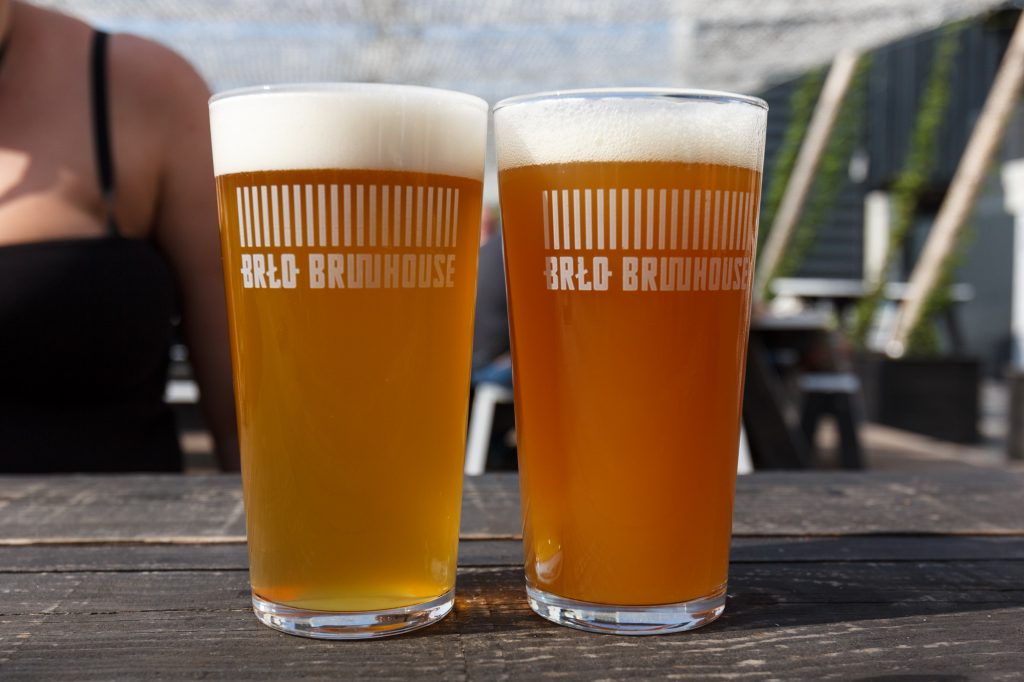 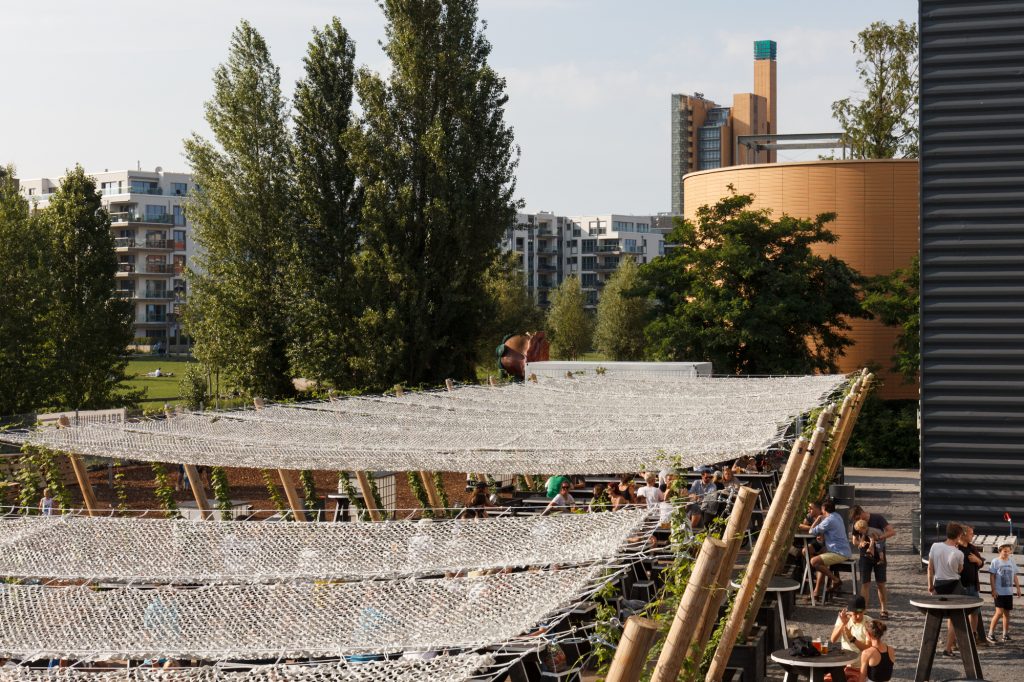 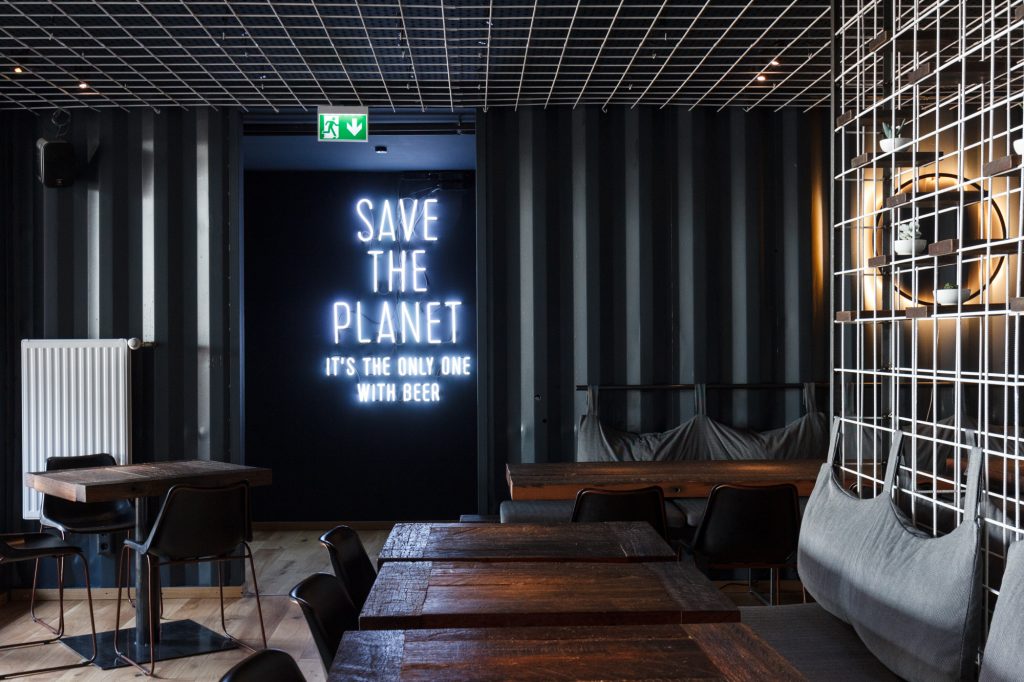 BRLO Brwhouse is the ideal spot for a craft beer thirst-quencher after an afternoon skateboarding, playing volleyball or lounging around in Park am Gleisdreieck and given the U-Bahn stops almost overhead it’s an easy place to get to – check the BRLO website for the latest opening times.

Sunday Documentary: 1930s Berlin – Documentary on Life in Berlin from British Pathé
The Rise and Fall of the Berlin Wall – Konrad H. Jarausch