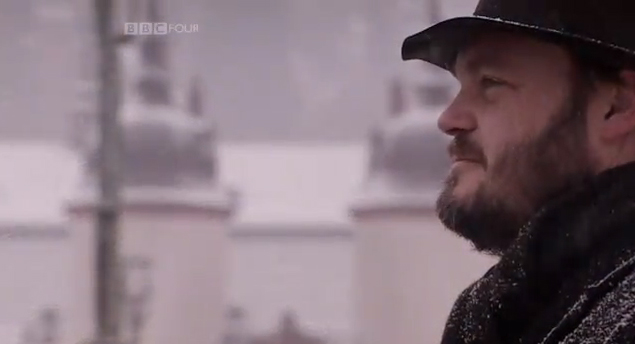 British comic, Al Murray, most famous for his character ‘The Pub Landlord’ sets out to dispel some myths about the German people in the BBC4 documentary: Al Murray’s German Adventure.

Murray explores the German people and their culture as he travel around the country and encounters some of the greats of art and science, amongst them: Brahms in Hamburg; Goethe in Weimar; Nietzsche in Röcken; and Wagner in Bayreuth.

In Berlin, he learns to appreciate the dramas of Bertholt Brecht, finds out about Karl Friedrich Schinkel’s transformation of the city’s architecture and admires Schloss Sanscoucci with art historian, Jörg von Stein.

Whilst with his comedy character, Murray, seeks laughs at the Germans’ expense, the former history student’s curiosity and enthusiasm for his journey makes for an interesting and entertaining programme.

Originally shown in two 1-hour parts, the documentary has been split here into eight parts (Warning: Part 3 has been blocked by GEMA in Germany).