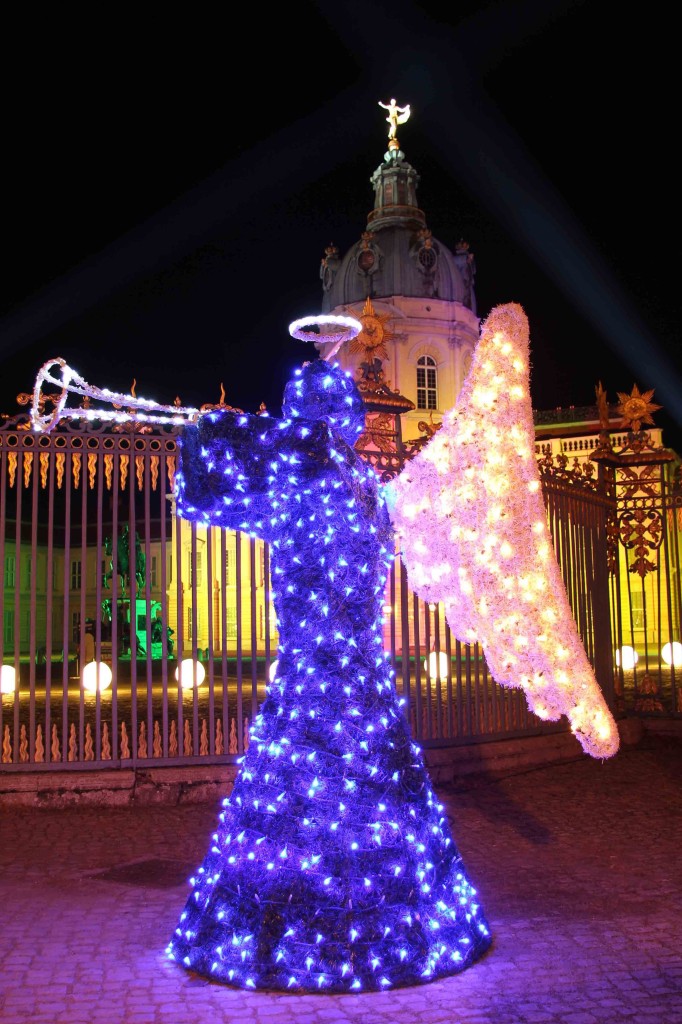 The Christmas Markets season in Berlin is well underway now and I’ve been out and about trying to sample as many as possible.

A friend recently told me that there are 60 Christmas Markets in Berlin this year.  It’s no wonder then that Berlin is popular with tourists who plan holidays specifically to take in some festive cheer.

With so many markets in the city it is difficult to know which ones visit so here’s my pick of the best Christmas Markets in Berlin I’ve seen so far. 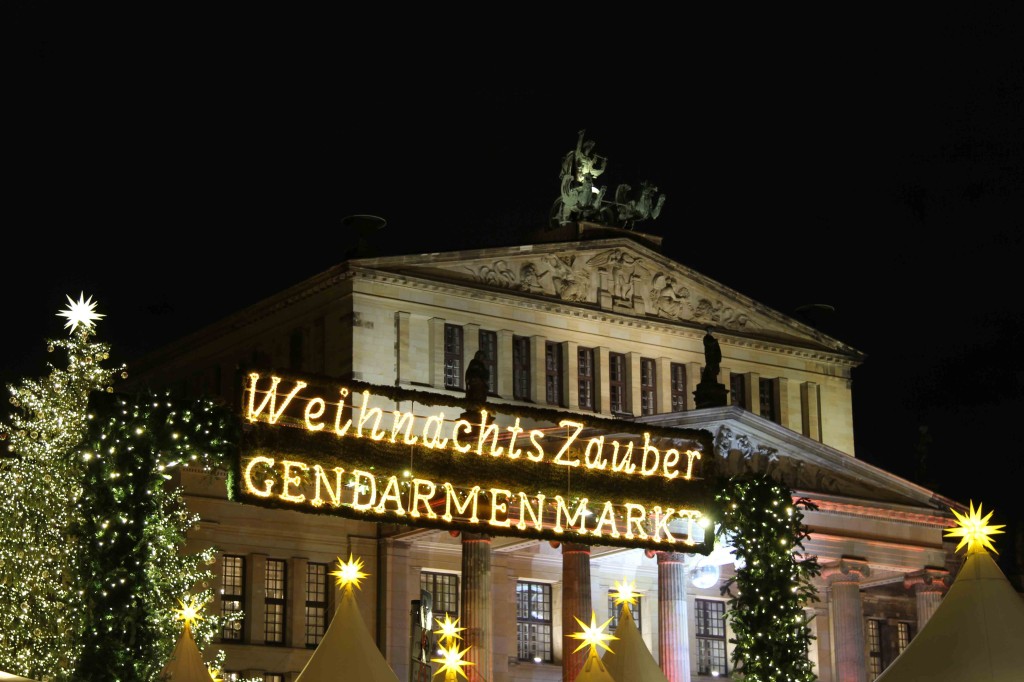 Set between the Deutscher Dom, Konzerthaus and Französischer Dom on one of Berlin’s most picturesque squares it has many food and drink options and stalls selling decorations, craft and gifts 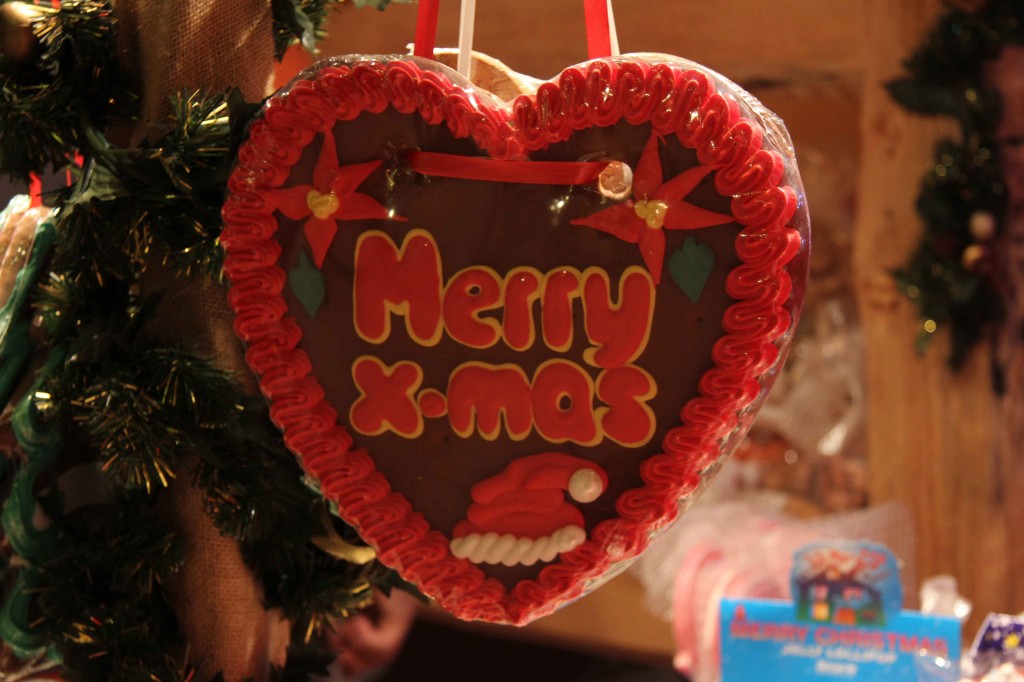 When I visited on a Saturday evening the market was so busy it was difficult to move at times but even on a Wednesday evening it was thronging with people. 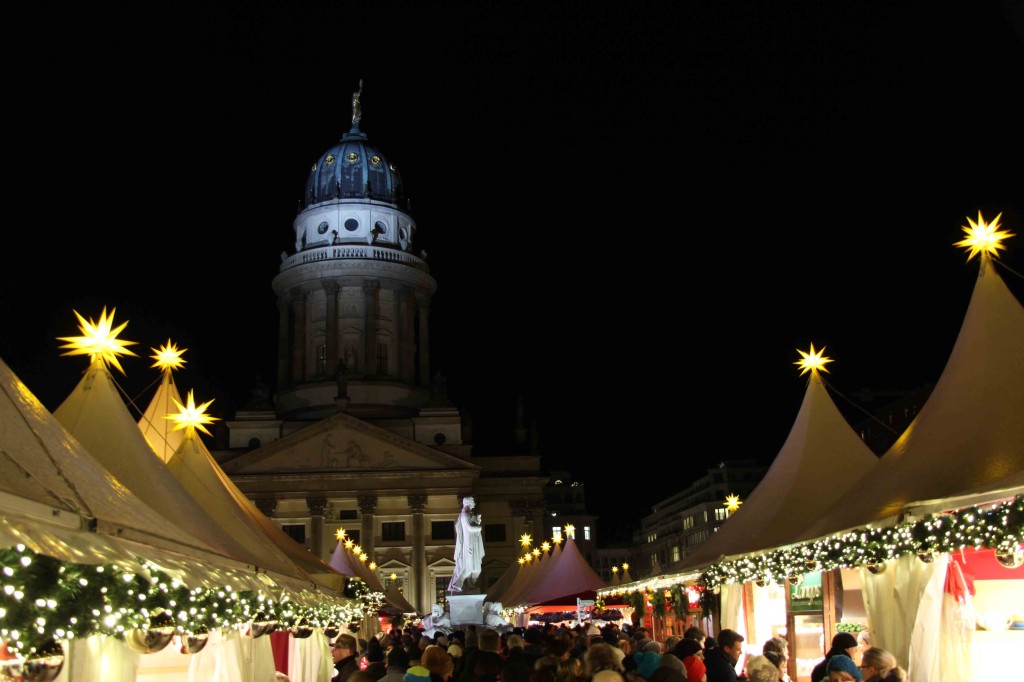 If you have a mug of Glühwein here look out for the image of Knut (a famous Polar Bear at Berlin Zoo, sadly no longer with us) as an angel inside the lip, as pointed out to me by an eagle-eyed Digital Cosmonaut on a recent visit.

Tip: Climb the Französischer Dom (entrance fee €3) for a bird’s eye view of the market from the viewing platform. 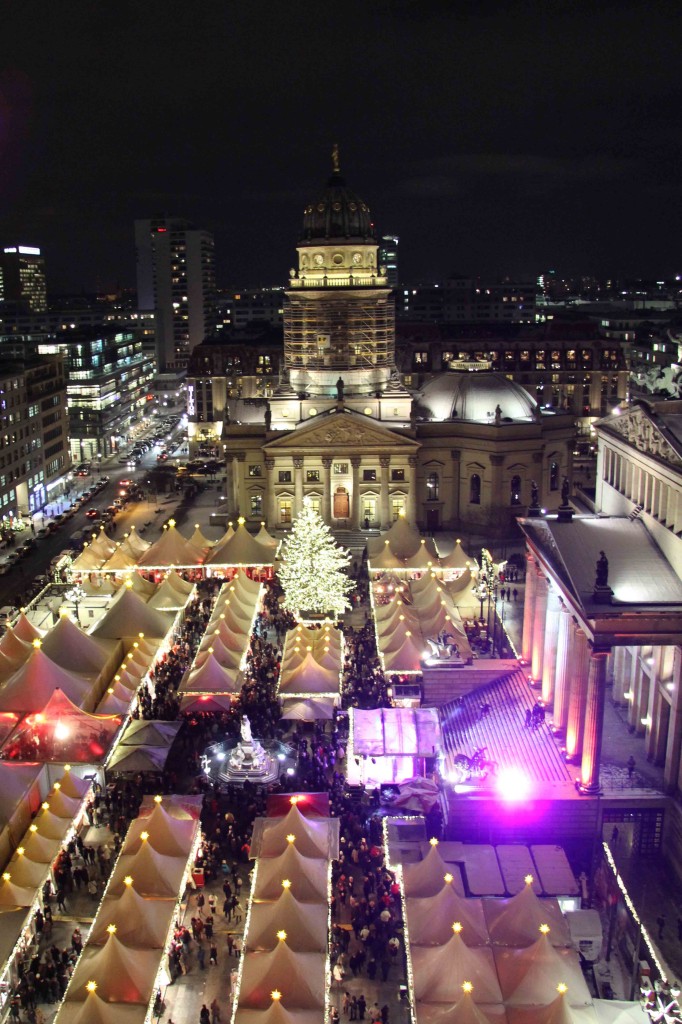 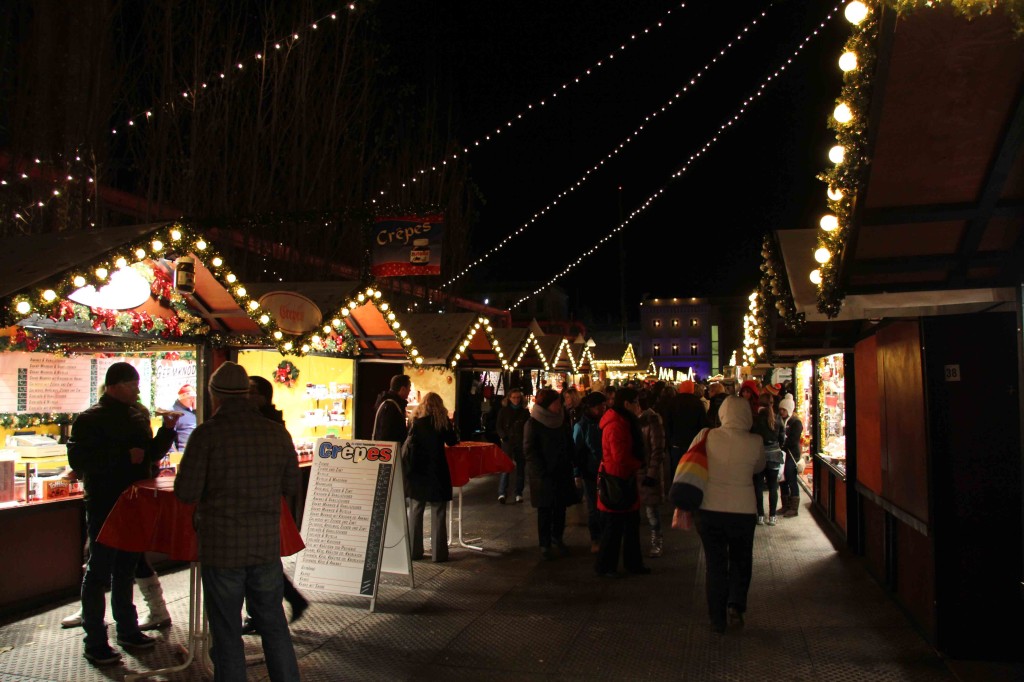 The Nostalgischer Weihnachtsmarkt (Nostalgic Christmas Market) at the Opernpalais was one of the busiest and most atmospheric that I visited last year in Berlin.

Unfortunately, I think its popularity has been affected by virtually being surrounded by a building site, as visitor numbers seem much lower this year based on the few visits I’ve made.

Despite this it is still an interesting setting with some great views and the market is well laid out and offers a good variety of stalls. 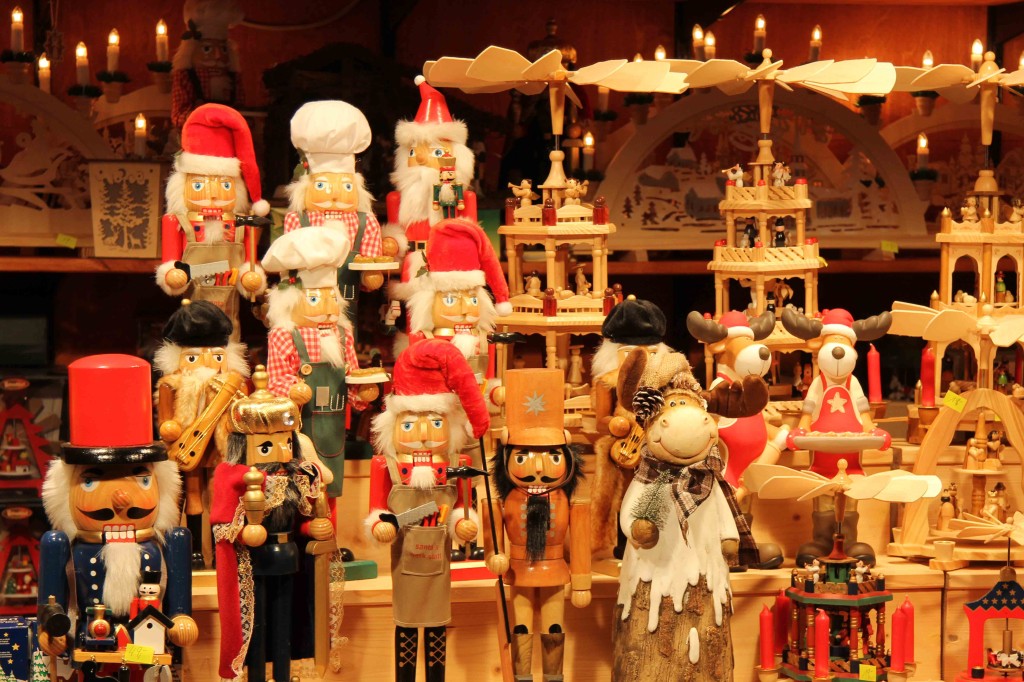 Hopefully, as we move closer to Christmas, the crowds, and with them the atmosphere, will return to Nostalgischer Weihnachtsmarkt am Opernpalais

Tip: Stop by the stage in the southeast corner for musical performances. 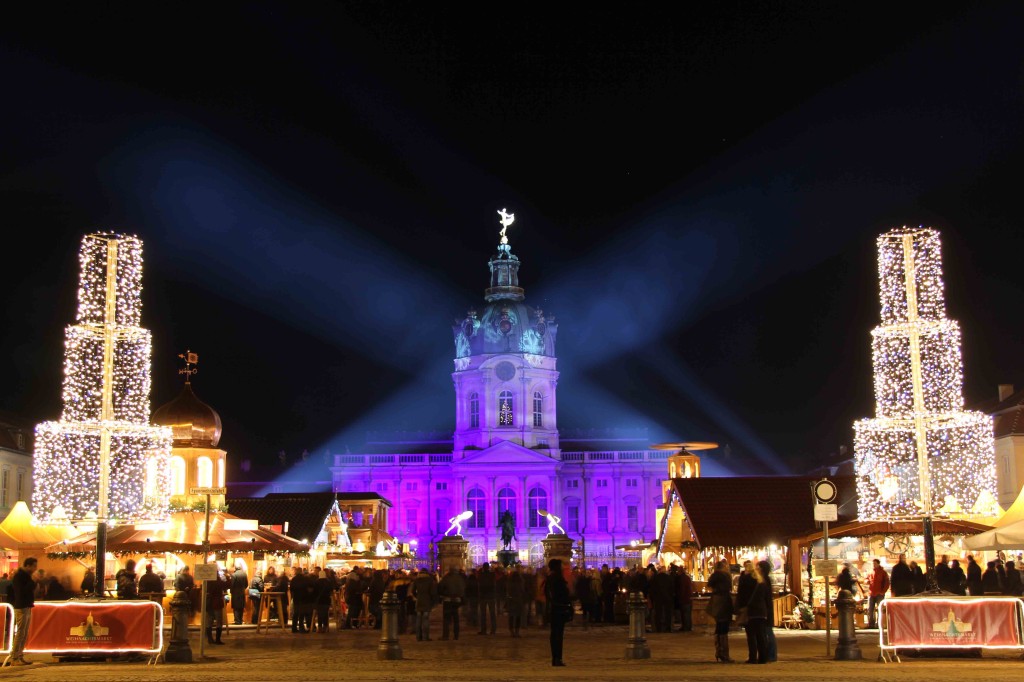 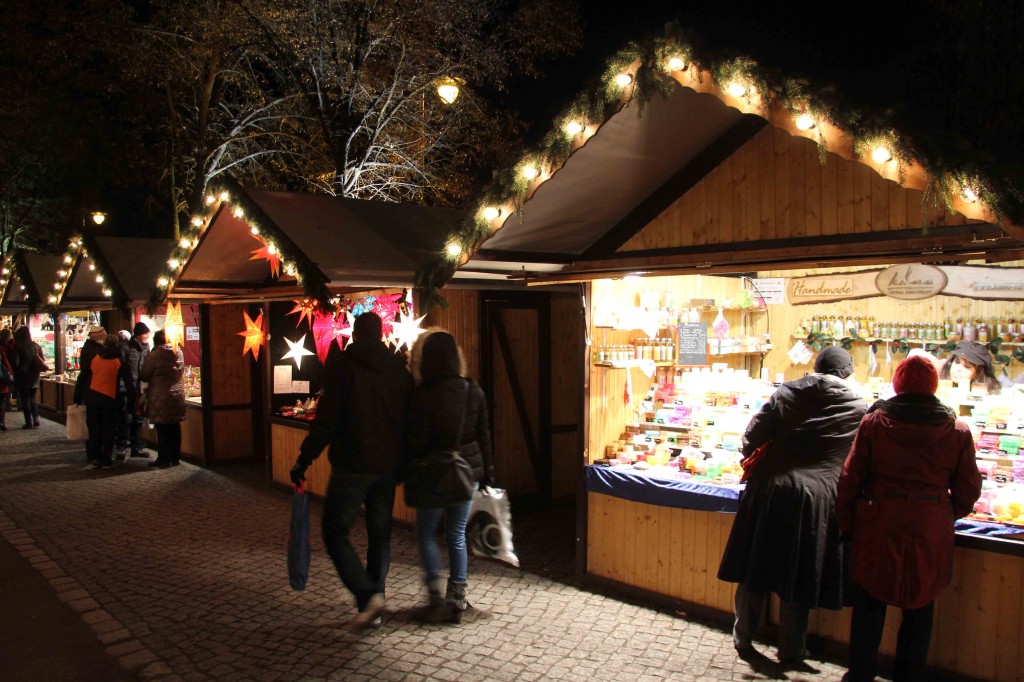 The cupola of the Schloss dominates the skyline over the market but the minaret of one food and drink stand and the Christmas Pyramid (Weihnachtspyramide) of the Deutscher Winzerglühwein stand provide interesting counterpoints. 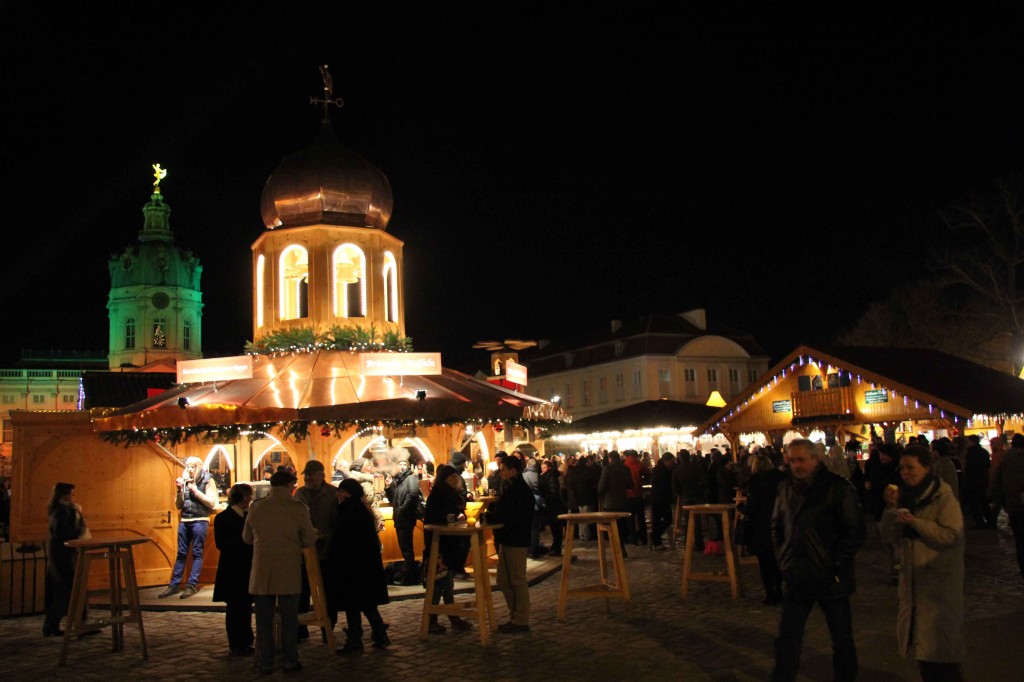 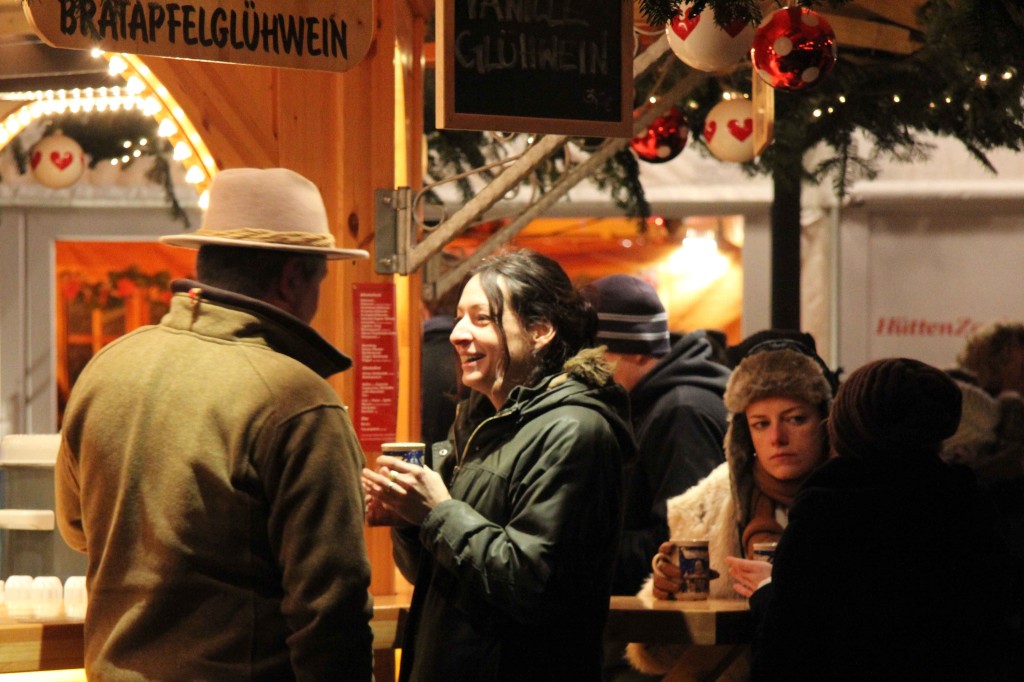 Tip: Arrive early and take the time to stroll around the Palace Gardens or go inside Schloss Charlottenburg. 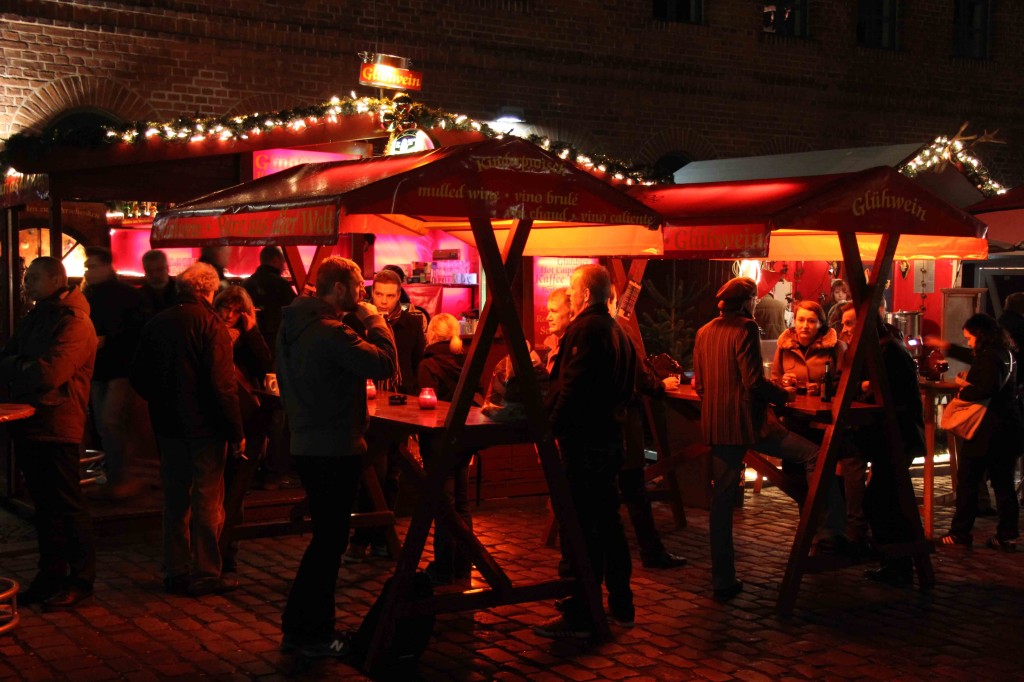 My favourite Berlin Christmas Markets of all those I’ve experienced this year (I haven’t been to all of them) has to be Lucia Weihnachtsmarkt at Kulturbrauerei.

Smaller and therefore more intimate than any of the other markets I’ve visited, Lucia has the best atmosphere. 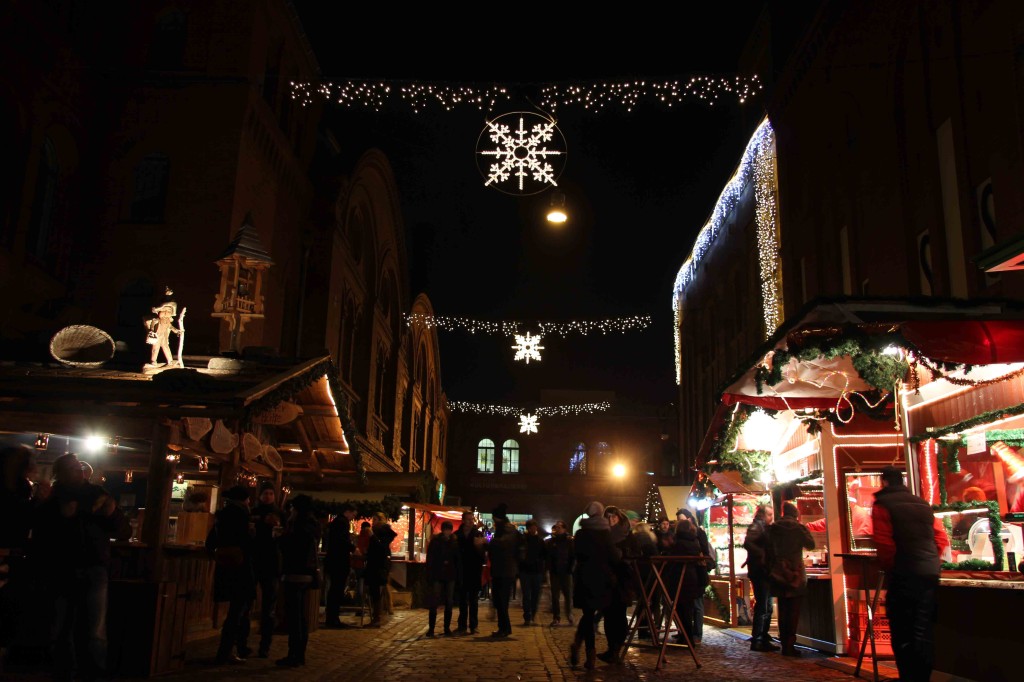 Having read the Tourist Information on the market’s website I can tell you:

Named after Lucia, the Nordic goddess of light, the market is dedicated to the Scandinavian countries.

The emphasis here is on food and drink stalls, with just a few selling the usual trinkets, and it seems that it is popular as a meeting place for the local community. 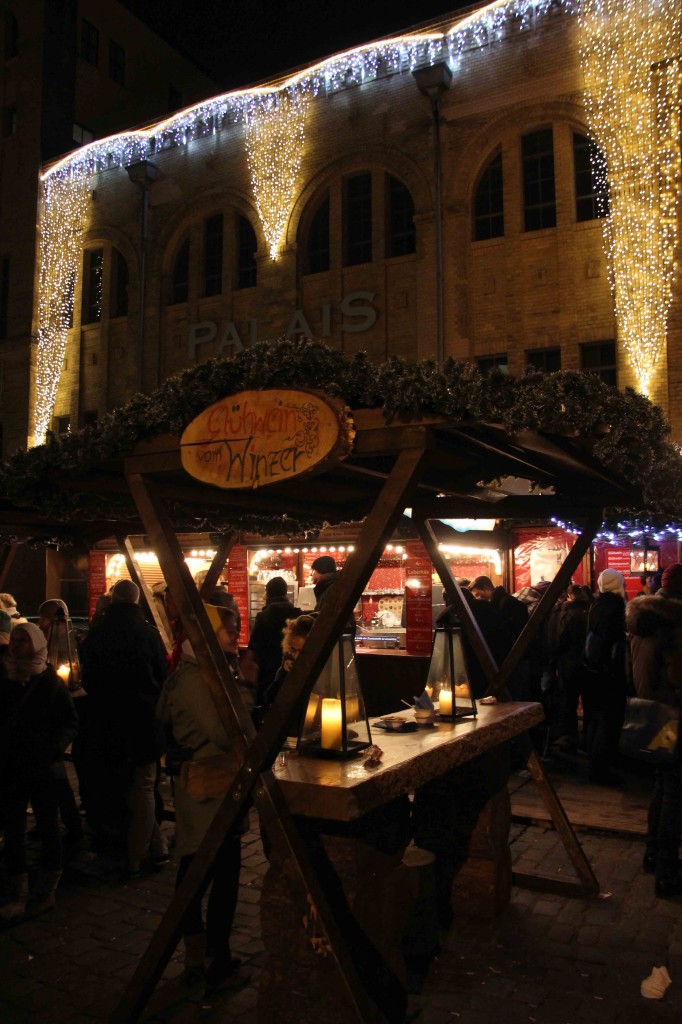 As this market is behind my local supermarket I have been here on all days of the week and have yet to go without walking into the buzz and chatter of groups of friends. 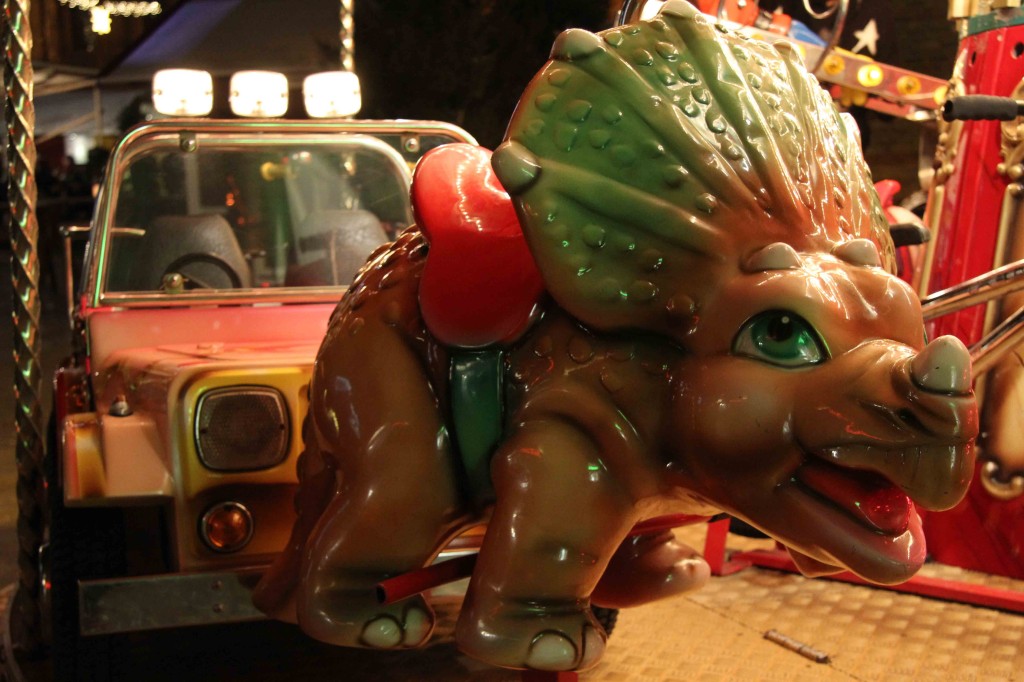 Tip: If you’re feeling a little chilly look out for the ‘Coat-Open-Air-Heater’, a circle of Sheepskin coats strung around a fire.  Sit down and slip your arms into a coat where it hangs – add Glühwein for added fortification against Berlin’s winter weather if needed. 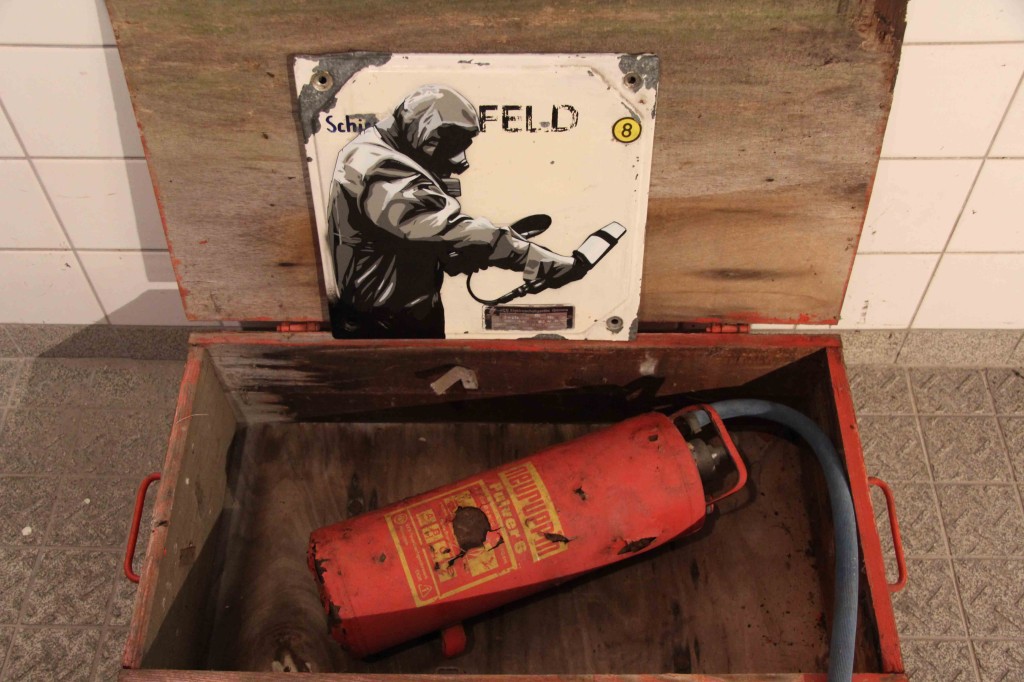 If you’ve had your fill of Glühwein and Bratwurst and would like an alternative to the many traditional markets in Berlin, head out to Stattbad Wedding for Stattmarkt.

This former public baths (Stadtbad), now a gallery/club/performance space, is hosting an art market Thursday to Sunday until 16 December. 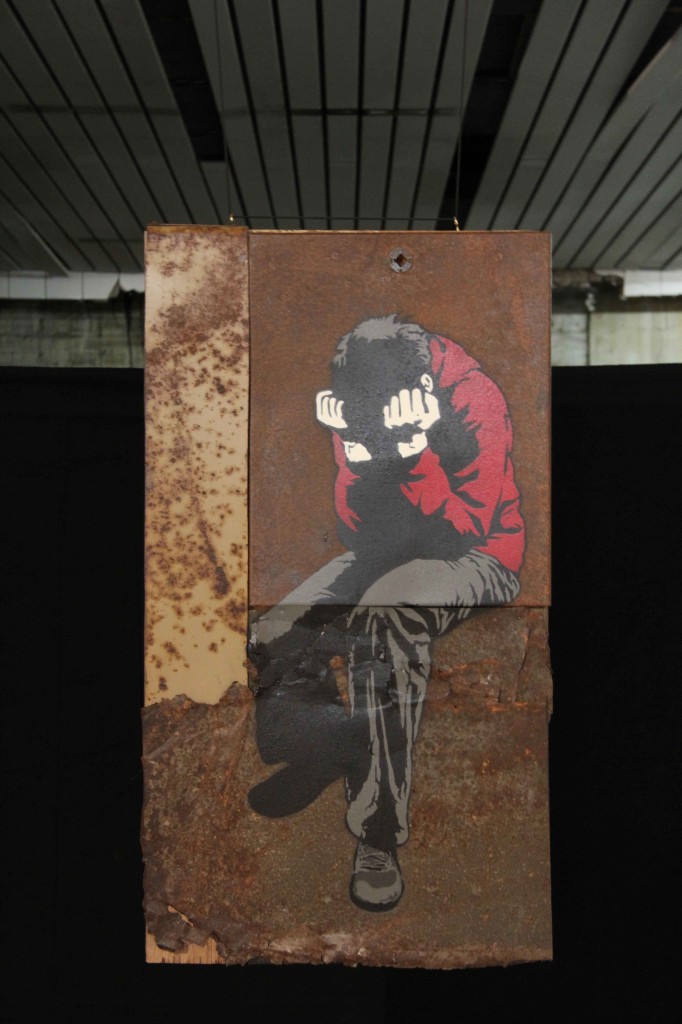 With over 300 artworks from new and established urban artists Stattmarkt at Stattbad Wedding is an opportunity to view some outstanding art in an innovative and intriguing setting.

Tip: Make sure you check out the outside of the building too as this is a popular spot for Street Artists.