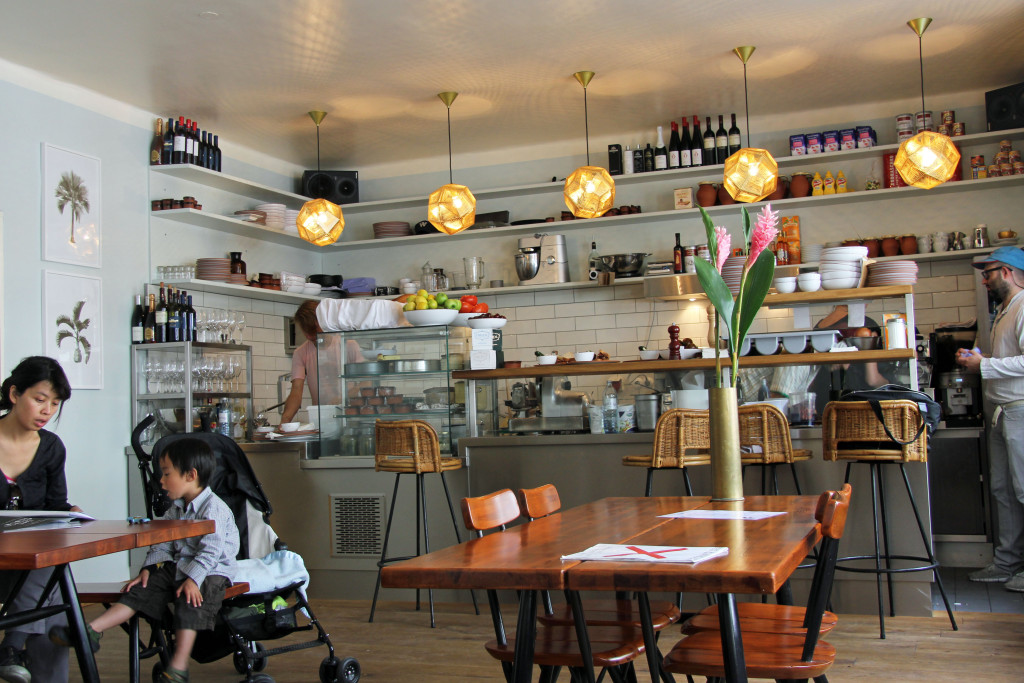 My first impressions when I walked into Berlin’s Mogg & Melzer* were that the room (and it is just a small space) had a stylish clean décor and that it smelt great.

*The partnership between Paul Mogg and Oskar Melzer has subsequently been dissolved and the restaurant is now known as Mogg.

I first found out that Mogg & Melzer served Pastrami sandwiches when I saw a posting from Slow Travel Berlin on their Facebook Page.

As I was so impressed with the Pastrami & Turkey sandwich at Ruben & Carla I was eager to see how this new delicatessen would match up.  During an exchange on the Slow Travel Berlin Facebook post Giulia mentioned that the pickle wasn’t pickly enough so I knew I had to pay attention to that as well.

Eager to find out which has the best Pastrami and the pickliest pickle I went to Mogg & Melzer the very next day for lunch.

The deli is in the newly renovated Jüdische Mädchenschule (Jewish Girls School) on Auguststrasse that also houses the restaurant, Pauly Saal, and three galleries.

When I first put my head around the door all of the tables were taken so I took a walk around the block in the hope that one would become free and I was in luck.

As I said my first impressions were good, my second thought was ‘Is it waiter/waitress or counter service?’  The room has an open kitchen, which I love as it’s great to see the food being prepared, with a small counter.

I stood at the counter for a few minutes studying a menu and no one paid me any attention.  So I took the menu to the table and sat there and waited for a few minutes but no one came to take my order.  In the end I got up and went to the counter again and placed my order – I still don’t know which it is meant to be.

And it’s not that the staff aren’t friendly, I saw one of them looking up directions on an iPad for a customer brandishing a guidebook.

I ordered the Large Pastrami Sandwich, as I was feeling very hungry, and a beer.

And it is a large sandwich, packed with pastrami and smothered in mustard, served with coleslaw and a pickle. 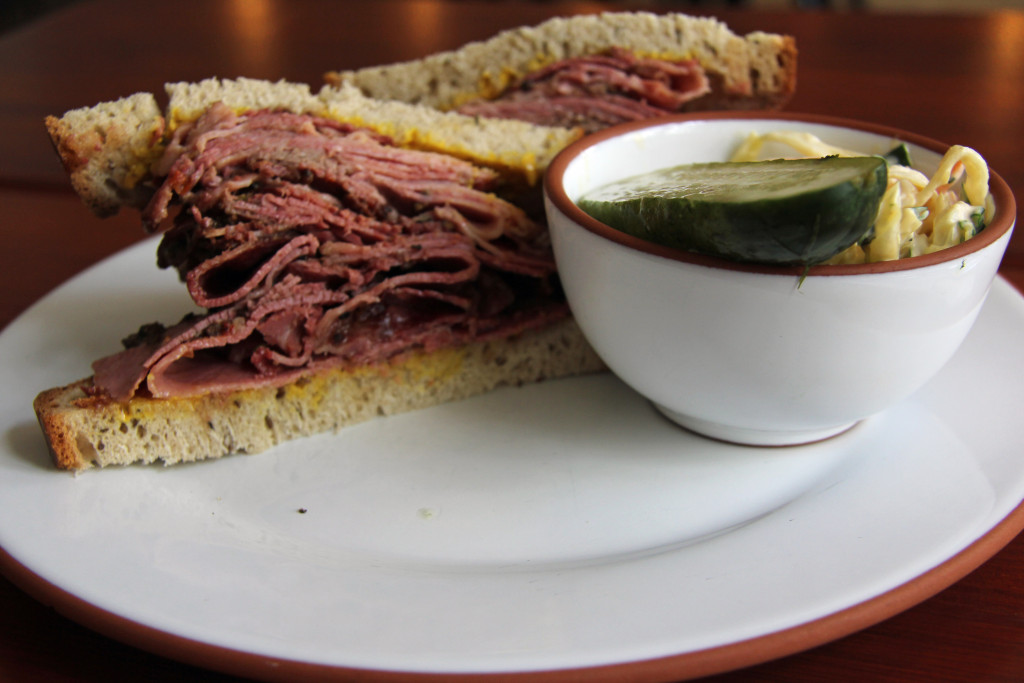 The pastrami was juicy and spicy and absolutely delicious and it is obvious that as well as the décor, a lot of thought has gone into the selection of the cutlery, crockery and glasses.  The beer glass I had could have doubled as a dumbbell it was so heavy, obviously not made for long drinking sessions but Mogg & Melzer isn’t that kind of place.

At €12 for the Large Pastrami Sandwich and €3.50 for a 330ml bottle of beer it is certainly on the expensive side but the taste is on the special side.

And about that pickle: it may have been introduced to the vinegar but they certainly hadn’t been given time to really get to know each other.  So as I told Giulia the next day the pickle at Ruben & Carla is definitely picklier.

As for the sandwich, whilst both are fantastic in their own way – at Mogg & Melzer it’s all about the meat but at Ruben & Carla, the accompaniments: tomato; sauerkraut; salad leaves; onion; dressing and mustard make every bite slightly different – Ruben & Carla is streets ahead on value for money and the warmth of the service (a big factor for me).

I’ll definitely go back to Mogg & Melzer when I need a big sandwich, maybe as a hangover cure, and I have to try the Reuben and the Pulled Pork – there’s just too much good food in Berlin.

2 Responses to Mogg – Deli in the former Jewish Girls School