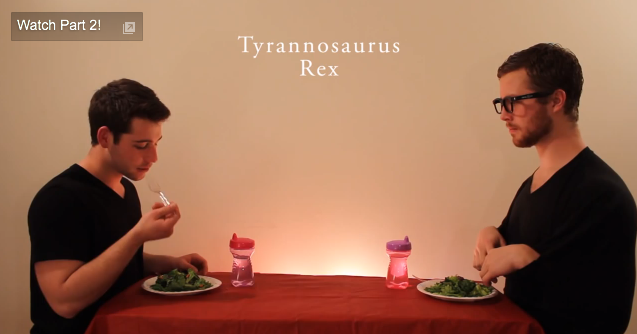 Photo: Still from How Animals Eat Their Food by MisterEpicMann

I have reached an important turning point – my nephew is telling me about YouTube videos I should watch.

At the end of the summer, two weeks after I introduced him to Ylvis – The Fox (What Does The Say?), my nephew, Owen (who was 8 at the time), told me during our fortnightly Skype call that I had to watch How Animals Eat Their Food.

He then fell off the sofa because he was laughing so much listening to me laugh at the video.

I realise that as this was the most popular YouTube video in the UK in 2013 and has almost 94 million hits at the time of writing that it is likely that you have seen this already but just in case…I hope you find it as funny as Owen did.

How Animals Eat Their Food

Now, with over 334 million hits, it is even more likely that you have seen the video that inspired his suggestion – Wa-pa-pa-pa-pa-pa-pow!

How Animals Eat Their Food, Ohrwurm, video, What Does The Fox Say, Ylvis