Cenacolo is a popular Italian restaurant on Sredzkistrasse in Berlin’s Prenzlauer Berg.  When my parents were visiting last year I spent some time researching places to eat in my Kiez and it had consistently good reviews.

I took my parents there on their second night in Berlin and despite only being here for 5 nights, when I asked them where they wanted to go on their last night, both of them wanted to go back.

And maybe this is what distracted me from my thoughts of pasta because when I opened the menu  I was drawn to the Filetto Al Pepe Verde – Fillet Steak with a green peppercorn sauce. 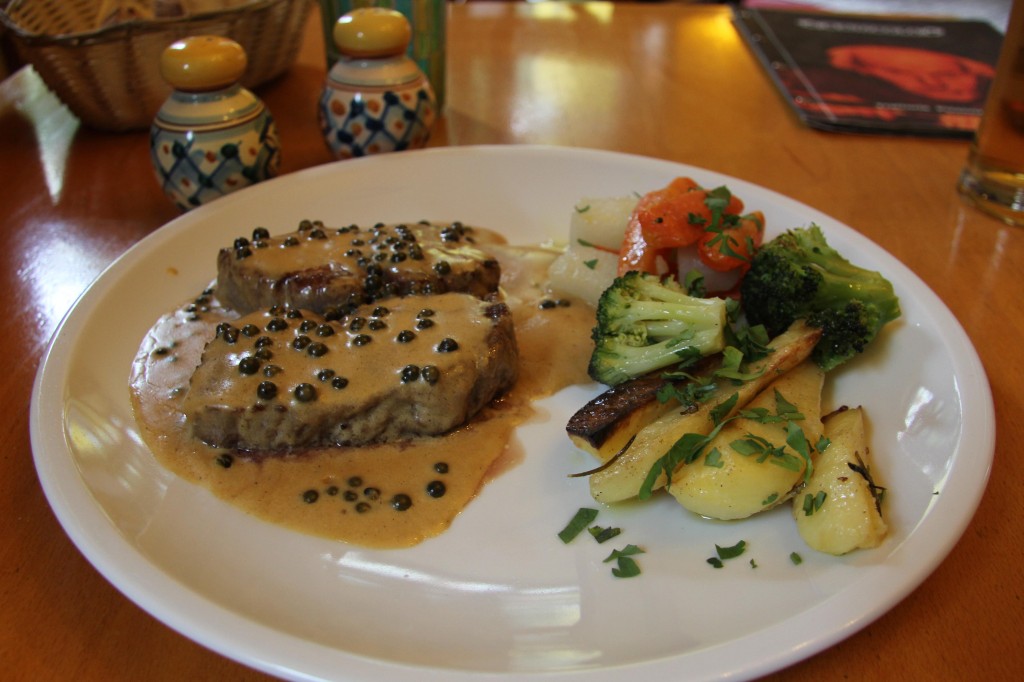 I had two sizeable, very tasty and tender pieces of fillet, accompanied by potatoes, carrots and broccoli.  My only criticism is that the broccoli was on the undercooked side of al dente for my taste.

I should also point out that at €24.50 my meal was one of the most expensive on the menu but as I have mentioned before, steak in Berlin is not cheap.

I’ve also eaten the Spaghetti Alla Carbonara (€7) and Lasagne Al Ragu (€8.50) and friends have had the pizzas (starting from €6 for a Margherita) and all were very good.

During the summer months, the outdoor seating is understandably popular and therefore the inside of the restaurant lacks a little atmosphere.  But during the colder weather (and there’s plenty of that in Berlin) Cenacolo is cosy despite its size.

I would certainly recommend Cenacolo to anyone looking for Italian food in Berlin – the tasty meals, reasonable prices (steak aside) and pleasant ambience are what make it such a popular choice.