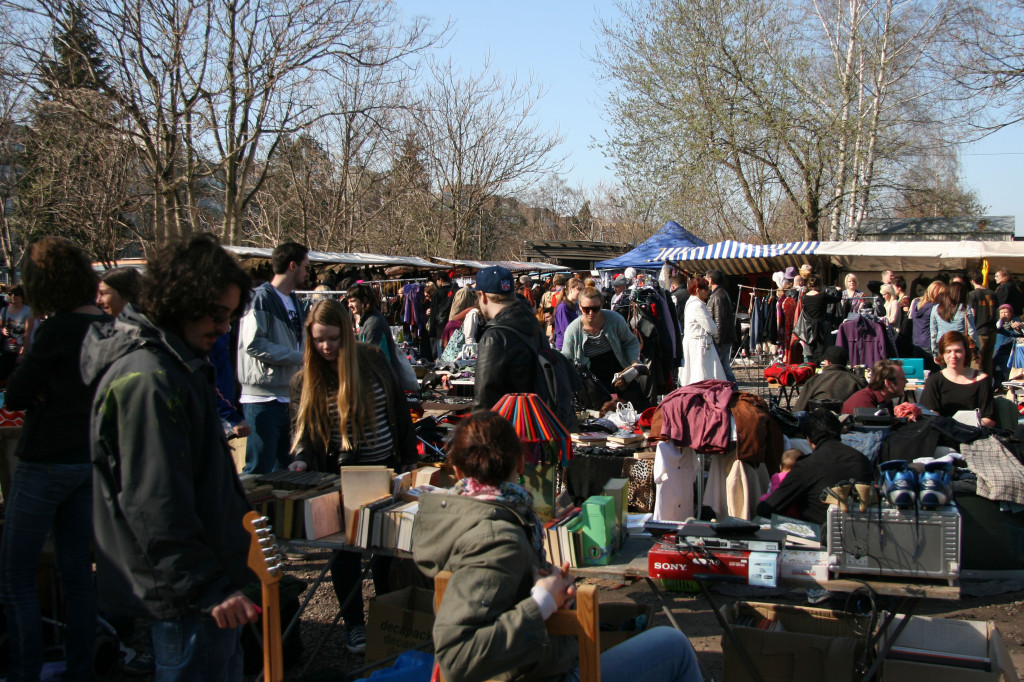 The crowd at the fleamarket at the Mauerpark yesterday was a real mix of the optimistic and the pessimistic.  Some were wearing hotpants, vests, flip flops and sunglasses.  Others were in overcoats, scarves and woolly hats.

For those of you that haven’t been there yet, and if you’re in Berlin on a Sunday I urge you to put that right, the fleamarket at the Mauerpark is a sprawling collection of stalls selling everything from original art and homemade pottery to house clearance junk (one man’s junk is another man’s treasure) and second hand clothes and books.

I came across a stall yesterday, that is either new or I have missed before, selling Lego figures.  There were Harry Potter characters, knights, Red Indians and Star Wars characters galore.  I even spotted Father Christmas and a snowman.

There are also plenty of stalls selling food and drink (it was a running joke with some recent visitors that you can get beer anywhere in Berlin).

Having experienced Berlin in summer three times I was amazed to walk through the stalls with relative ease during the winter but with the sun nudging the Mercury up on the day the clocks changed it was a different story.

The Mauerpark was swarming with bargain hunters, people spotters and Sunday strollers.  Those who weren’t thronging the aisles were lazing about on the grass in the shadow of the wall or gathered around the Bear Pit (site of the famous Karaoke sessions that I still haven’t seen) to enjoy the entertainment.

There were some people being a bit more active: jugglers, swingers and singers.  And a changing cast of characters on the basketball court.

And bearing witness to Berlin’s alternative tendencies a diver was making his way around the crowd.  He was either as mad as a box of frogs or very adept at drawing the attention he craved.  Probably a bit of both, as he seemed a lot happier when he had a crowd gathered around him and was having his photo taken.

The Flohmarkt am Mauerpark is held every Sunday (with a few exceptions – check the website) alongside a former strip of no-man’s-land off Bernauer Strasse.

I would definitely include a mooch here on my itinerary for the perfect Sunday in Berlin and if you’ve got the bargain hunting bug you can move on to the nearby Flohmarkt am Arkonoplatz.

For more information on the flea market you might like to read this article on Slow Travel Berlin.  And Zoe gives some insight into the people/style-spotting opportunities on überlin.

2 Responses to Flohmarkt am Mauerpark – a Berlin Flea Market