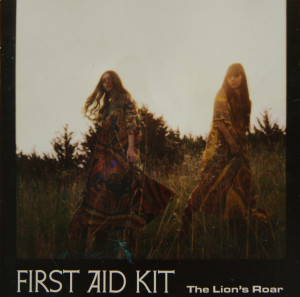 Last night was a night of firsts for me.

My first gig in Berlin.

The first time I have gone to a gig alone.

Sisters Johanna and Klara Soderberg are from Stockholm, though you wouldn’t know they are Swedish to hear them sing or talk.  It’s almost as if they are channelling the country greats they pay tribute to on their latest single, Emmylou (Emmylou Harris, Gram Parsons, June Carter and Johnny Cash).

They played a mixture of songs from their latest album, The Lion’s Roar, their previous album, The Big Black And The Blue, and their Drunken Trees EP – an impressive catalogue of songs at such a young age.

When they played Ghost Town they stepped in front of the microphones and played it ‘unplugged’, which they said has become a tradition.  And that probably got the best feedback from the audience.

The Soderberg sisters are extremely talented and accomplished songwriters and their harmonies are beautifully blended, a skill no doubt honed over the years they have performed together. Their live performances are just as good as their recordings but if I had one criticism it would be that they have a tendency to sound sarcastic when they are talking to the audience.  The exception to this was when they were discussing drummer Mattias’s birthday when they showed more personality and seemed more genuine.

I certainly don’t think that the sarcastic tone is intentional though.  A band happy to sign merchandise and chat to people after the gig obviously appreciates the people who are coming to watch.

Oh, and another first for me I bought the latest album, The Lion’s Roar, at the gig and queued to have it signed by the sisters.

As my time in Berlin is all about new experiences, enjoying so many firsts in one night can’t be bad.