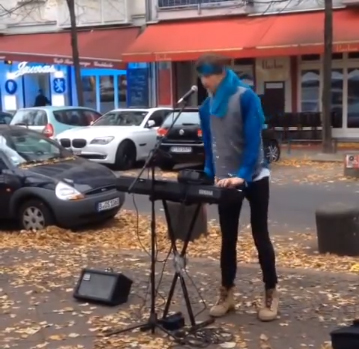 Wearing tight trousers, chunky boots, a spangly top and a headscarf, Stephen Paul Taylor,a Canadian Wahlberliner, sings ‘Everybody Knows Shit’s Fucked’ and then he starts to dance, flicking his legs in what will surely become the Office Party dance move of 2014.

The scene was captured by Louisa Menke a Dutch photographer and pro skater and posted to her Instagram account.

The “everybody knows shit fuck” dance

The video was shared on Reddit and that’s when its popularity just took off.

Asked about the song in an interview for a Munich radio station, Taylor said:

I think it embodies the frustration and confusion that’s going on in the world right now. Because things are pretty fucked. Really all you can do is say Shit’s Fucked and accept it in a way. I think maybe that’s just the zeitgeist.

Spotting the opportunity that the viral video has presented SPT has recorded a full-length video for the song in his kitchen with some friends and there’s a release party at Urban Spree on 11 December 2014.