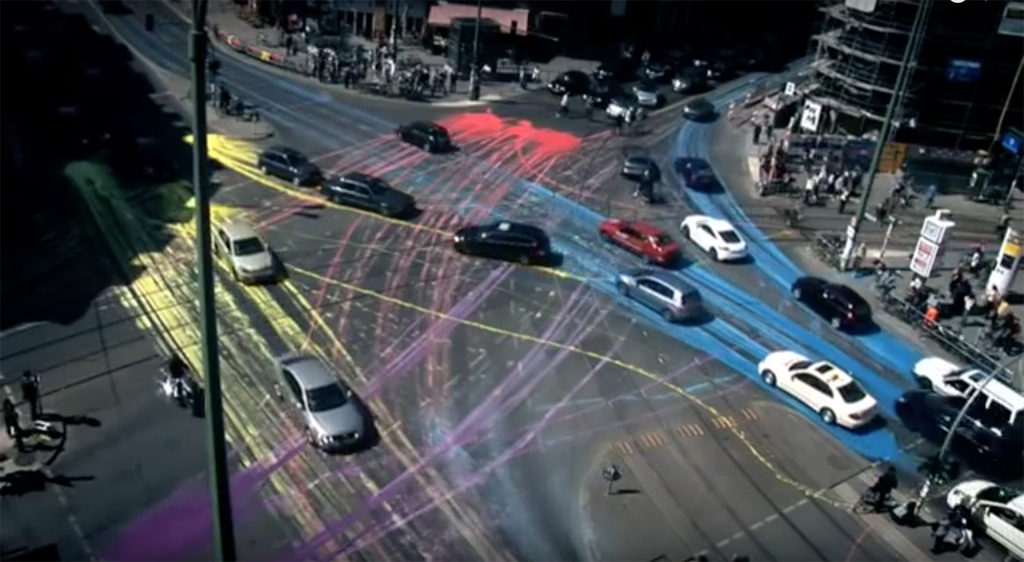 Berlin has often been described as grey and drab but the intersection at Rosenthaler Platz is anything but in this video, Painting Reality, a record of a guerrilla art action by IEPE and the Anonymous Crew.

On a quiet Sunday in April 2010, a group of cyclists, coming from four different directions, gathered at the lights at Rosenthaler Platz.  Each bike was fitted with a basket, carrying between them 500 litres of water-based paint.

As the traffic lights changed to green, each cyclist dropped his load of paint on the road and as the cars moved on, the drivers inadvertently became the artists of a giant artwork in pastel hues on asphalt.

Der Tagesspiegel reported that by Monday rain had washed most of the paint away, leaving only a few colourful sprinkles.

At the time nobody knew who the mysterious artists were but then a video (see below) posted later attributed the action to IEPE and the Anonymous Crew.

IEPE is Dutch-born Iepe Rubingh, who describes himself on his website as storyteller, entrepreneur, innovator and artist.  He was once jailed for 10 days in Tokyo when his art blocked a major intersection causing serious traffic congestion.

He is also the inventor of Chess Boxing.

The battle consists of 11 alternating rounds of chess and boxing.

Painting Reality is probably one of the most surprising bits of street art I’ve seen (though unfortunately not in person).  Watch the video to see cars, cyclists and pedestrians create a huge colourful painting on the asphalt canvas of Rosenthaler Platz in Berlin.