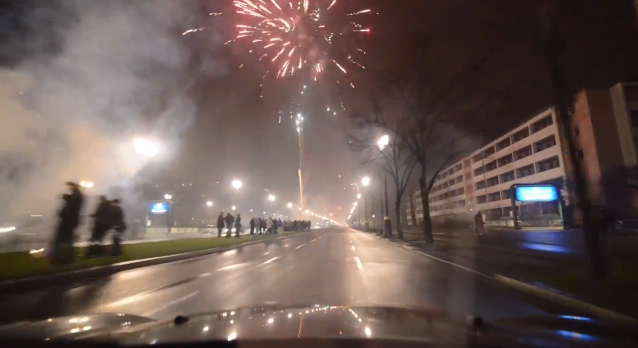 Photo – Still from New Year’s Eve in BERLIN by JUST

Frohes Neues!  Happy New Year!  Blywddyn Newydd Dda!  2015, just like every new year in Berlin, started with a bang.  Berliners love their fireworks on New Year’s Eve (Silvester or Sylvester depending on your preference) and Berlin-based photographer and journalist JUST was out on the streets filming the mayhem.

When I saw a video of the New Year’s Eve celebrations in Neukölln a few years ago I was amazed by the carnage and this year I was a part of it.  The friends I celebrated with had brought the appropriately named Boom Booms and plenty of other Böller (bangers) and rockets.

Standing at the bus stop on our way to a NYE party I commented to Steffi that I wouldn’t want to drive a car through the streets with all the fireworks going off around me.  Having watched the video that JUST made I kind of wish that I had. Sit back and enjoy a trip along the Karl-Marx-Allee in Friedrichshain, over the Oberbaumbrücke into Kreuzberg and finishing in Neukölln.  Experience in the safety of your own home the fireworks of a Berlin Silvester.